CHIEF EXECUTIVE Peter Moore perhaps summed it up best when he said Liverpool had “merged analogue and digital” to become “the essence of a modern football club”.

In his words, they had combined science, structure and human qualities to become the best team in the country.

While covering the club for the last few years on TGG, we’ve also seen trends that have put the club ahead of the rest, helping Jurgen Klopp to deliver a first league title in 30 years.

In short, there are things they do better than anyone else which, when put together, have made them unassailable.

David Slemen, the founding partner of Elite Performance Partners, has written a TGG series on the five key roles for high-performing teams.

Even if some of the titles are slightly different at Liverpool, they still have most of these bases covered. Michael Edwards has been Sporting Director since 2016, taking a long-term view of football operations and enabling Klopp to focus on his day-to-day work.

Edwards’ responsibilities span recruitment, analysis, the Academy and science and medical. He is a former semi-pro player who understands footballers and coaches, but is also expert in the ‘digital’ side of the game that Moore referred to, having been an analyst before moving into his current role.

When he signed a contract renewal in December, Klopp said: "I must highlight the role of our Sporting Director Michael Edwards in this journey so far. His input and collaboration has been just as important as anyone else's in getting us into a position to compete for the game's top titles."

Elsewhere, Ian Graham is effectively the Director of Analytics (his actual title is Director of Research) and he heads up a six-man team that we’ll look into in more detail below.

His team gather valuable data insights that are used in recruitment, performance, analysis and coaching at the club.

Performance Manager Philipp Jacobsen was hired from Aspetar in Qatar in June 2018 and has ultimate responsibility for the science and medical departments at Liverpool, although influential Head of Fitness and Conditioning Andreas Kornmayer is more involved with the day-to-day preparation of the team.

Liverpool might not have a Head of People and Team Development, but psychologist Lee Richardson fulfils many of these functions. The former pro footballer and manager works for the club three days a week and has described a “mastery culture” that involves “a constant striving for excellence, for being as good as you can be."

Liverpool have used a number of specialists, either as consultants or full-time members of staff, who are experts in their own specific aspect of the game.

The most obvious of these is throw-in coach Thomas Gronnemark, who joined ahead of the 2018/19 season.

Andy Gray may have ridiculed the appointment, but the Dane's impact has been significant. Gronnemark says that in the season before he started working with the club (2017/18), they had 45.4% possession from throw-ins under pressure (when every player on your team is marked).

This put them 18th of the 20 Premier League clubs. However, in his first season with the club, Liverpool's possession from under-pressure throw-ins rose to 68.4%, ranking them top of the league.

There are other specialists, too. Liverpool have had a full-time nutritionist, Mona Nemmer, for four years, when some of their rivals still don't have one, and psychologist Richardson has been working with the team since June 2019.

Klopp's interest in expertise from outside of football led to German surfer Sebastian Steudtner coming in to deliver a talk on how to deal with stress and anxiety by using breathing techniques during pre-season.

Liverpool have the biggest, best and most-established data science team in English football.

FSG's ownership of the Boston Red Sox in Major League baseball, plus John W Henry's background in commodities trading, meant data was always going to be key element of their stewardship.

Graham has been with Liverpool since July 2012 and now heads a team of six, made up of four data scientists and two engineers.

The quartet have formidable academic credentials: Graham has a PhD in physics from Cambridge University, lead data scientist Will Spearman is a Harvard graduate with a PhD in particle physics, Tim Waskett has a PhD in X-ray astronomy, and Dafydd Steele earned first-class honours in mathematics before working in the banking and energy sectors.

However, the quality of the staff and their work would mean little if it didn't impact coaching, recruitment and performance. This is where Liverpool have been very effective - at integrating the data team into the wider football operation.

Graham played a part in bringing Klopp to the club in the first place and quickly got the German on side by analysing his work at Borussia Dortmund.

READ MORE: Ian Graham - The one currency Liverpool use to judge players

"I analysed 10 seasons of Bundesliga performances, and Dortmund were the second-unluckiest team in that 10-year history," he later revealed. "It was just some terrible luck that cost Jürgen that one season (2014/15).”

A key area of influence for the research team is in recruitment - “We have detailed data on hundreds of thousands of players... so we can really help that filtering and identification process" - but the department has a far wider remit than that.

For example, Spearman has explained how modelling of pitch control is used by the coaches on the bench during a match.

Liverpool have a clearly-defined style of play that influences how they train, play and recruit.

In an interview with Elite Soccer, Klopp described it as: “We want to attack the opponent non-stop: when we have the ball, when we lose it and when the opposition have it.”

The German is "the leader and face of the team, the one who defines the character and who stimulates everyone”, in the words of his assistant Pepijn Lijnders, meaning that this philosophy “comes back in every exercise”.

Gegenpressing, or counter pressing, is fundamental to Klopp's philosophy.

“They have to understand why it’s so important,” Lijnders said. “It’s quite simple - it’s just about the continuing stimulation of our mentality to conquer the ball as quick and as high up the pitch as possible.

“Attack the opponent with – but especially without – the ball; a chasing attitude over 95 minutes. Our way of playing is central element in our training sessions."

Early on in his reign, Klopp was criticised for training his players too hard, leading to injuries.

In May 2017, Dutch coach Raymond Verheijen said Klopp was “still not understanding what he himself is doing wrong” and “trying to distract attention from the mess he has created.”

He added: “It is very simple. Everybody is impressed by how Liverpool plays against the top teams but the mistake he is making is that if you are playing with such a high tempo, you have to reduce the volume.”

Over time, however, the number of injuries reduced, leading some to conclude that the players had become more resilient and attuned to the demands of Klopp’s playing philosophy.

Former England Head of Team Strategy and Performance Dave Reddin told TGG: “I am really full of admiration for those coaches who have been prepared to tolerate a few injured players in pursuit of that goal because I do think sometimes that is what it takes. 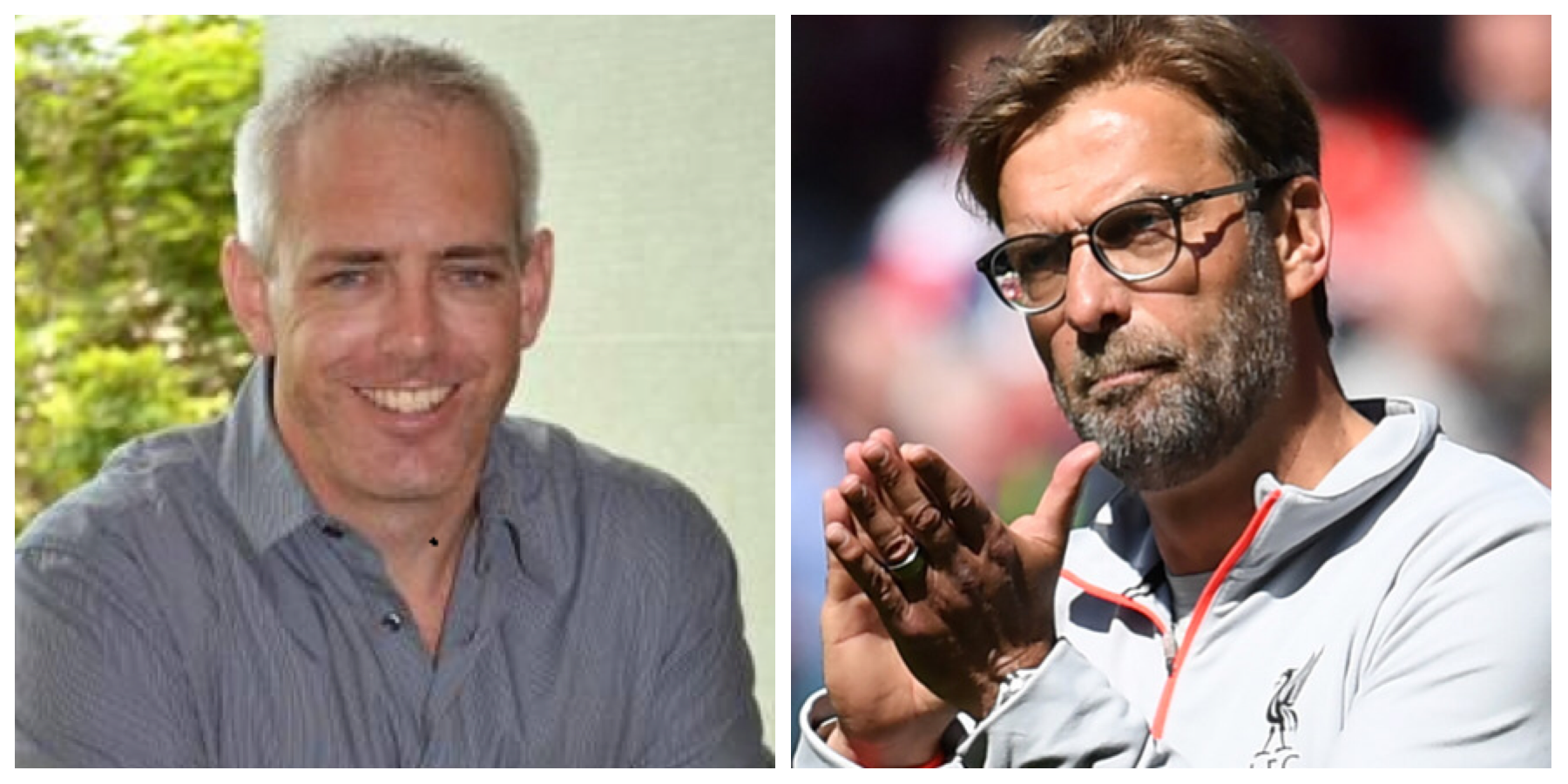 “It’s been interesting looking at the work of people like Mauricio Pochettino and Jurgen Klopp, who have come in and radically changed physical training approaches. I really admire the work they’ve done because they have been prepared to take the hit.

“You have to be prepared to take the hit and say, ‘Look, the whole group are only going to benefit if we can fundamentally change. Along that journey we are going to lose a few, sometimes for a week or two, sometimes for a bit longer, but in pursuit of the greater good you have to do that’.”

This brings us onto the final, and perhaps most important, piece of the jigsaw at Liverpool.

Klopp has done what none of his seven predecessors as manager was able to: he's delivered a 19th league title.

One of those predecessors, Gerard Houllier, told the TGG Podcast: "He (Klopp) fits in well with the city, with the passion and enthusiasm. He is an expert who keeps the soul of a child.

“I finished second and so did Rafa Benitez and Brendan Rodgers. I would like to come and congratulate Jurgen, because he achieved what we couldn’t achieve.”

We can talk all we want about data, structures and science, but, at the end of the day, it’s human relationships that perhaps count most of all.

As Klopp himself has said: “All we do in life is about relationships. Otherwise, if you only want to be responsible for the things you do, then live in a forest alone.”

According to Moore, the German is the figurehead who sets the mood for the entire club.

“Jurgen is one of the more holistic human beings you will ever meet,” he said. “He is able to keep the ship going straight, motivate not just the players but his staff, the coaching staff, the sports science staff - he keeps everyone on an even keel.

"His personality is infectious. His charisma is without question. Even when you have lost he makes you think there is a brighter sunshine ahead."