ROB PRICE, Leeds United’s new Head of Medicine and Performance, says he will look to “push boundaries” at the club this season.

Price, who was appointed in June after almost six years in the same role at Hull City, is tasked with physically preparing the players for manager Marcelo Bielsa’s notoriously demanding style of play.

The Argentine likes to use a small core of players (he has already told the club that 15 can leave) and demands a high-pressing, high-octane style.

Remembering the end of the 2011/12 season, in which Bielsa’s Athletic Bilbao fell away after reaching the finals of both the Europa League and Copa del Rey, midfielder Ander Herrera said: “I can’t lie to you - in the last months we couldn’t even move. 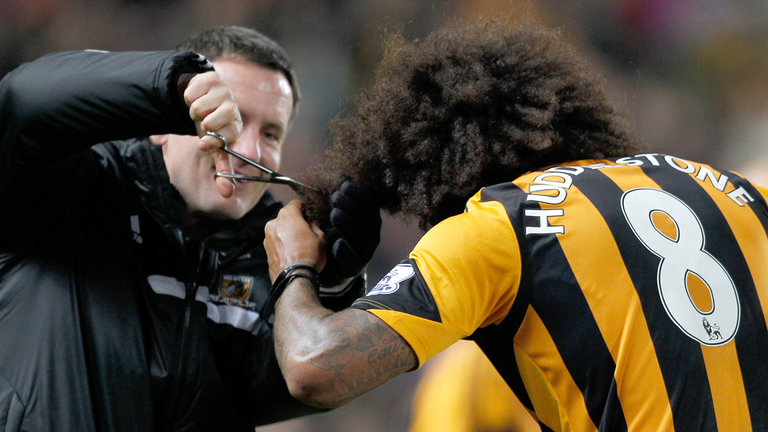 Price doing a spot of hairdressing with Tom Huddlestone at Hull

“Our legs said ‘stop’. To be honest, we were physically fucked.”

Price told the Yorkshire Evening Post’s chief football writer Phil Hay that he was relishing the challenge this season though.

“The more we have players available and on the pitch, the more it’s going to help the team be successful,” he said.

"But, also, can we push boundaries?

This is a balance that Tony Strudwick, the current Wales and former Manchester United Head of Performance, has encouraged.

He explained: “Lots of people from lots of different sports were on the course, from equestrian and swimming to rugby. We visited these different places and all these sports to bring in the best ideas and practice into what we do.

“I’ve spent the last few years trying to develop my management style and myself as more of a leader, as opposed to the medical qualifications I’ve got.

“At a football club it’s not just about working one-on-one. I manage a group of people and the medical department at Leeds isn’t just me. It’s lots and lots of people that work behind the scenes, with the first team, the academy and right down to the kids just coming in.

“You’re dealing with individuals, you’re dealing with players with different needs and personality styles which you’re trying to adapt to. And these days you’ve got to report upwards to the Sporting Director, the Chief Executive and the owner about what’s going on.

"Your management and communication skills are important. I’m not going to be a Sporting Director, that’s not my role, but I was there to be around these people."