Luke Benstead: The art of analysis with Belgium

LUKE BENSTEAD was appointed as the Belgian Football Association's first Head of Performance Analysis and Innovation in September 2018.

Prior to that he was first team performance analyst at Manchester United and also worked at Everton for seven years. The Englishman told us what his job entails and how he dovetails with Belgium manager Roberto Martinez and his coaches.

How did you get into football analysis?

Luke Benstead: I started off by picking up cones for the Under-14s at Tranmere Rovers. I was studying science and football at Liverpool John Moores University at the time and just wanted to get practical experience in the game. Then an internship came up at Everton in their sports science department and I was lucky enough to get it.

I did quite well and EPPP came in and the club needed another analyst, so I got an opportunity to move up the ranks. When Roberto Martinez came into the club (in June 2013) I made that natural progression up to the first team because a lot of staff had gone with David Moyes to Manchester United. I was with Everton's first team for three years in total before going to Manchester United.

My time at Old Trafford was another great experience. Jose Mourinho was the manager and Paul Brand was Head of Analysis. Paul is a great line manager and leader. We had five of us in total in that department.

Then, in the summer of 2018, I went to the World Cup in Russia with Belgium and it just went really well. It was never my plan to go full time with them but things went so well, and I forged so many strong relationships, that I just couldn’t turn down the chance to join them full time.

EVENT: Luke Benstead will be speaking at 'Big Data - The Future of Football?' on Nov 22nd

What is the role of an analyst?

Sometimes we can forget how much pressure managers and coaches are under and lose track of what our role should always be - to support.

Support doesn’t mean being a ‘yes man’, though.

If the manager wants to play a certain way against the next opposition and you don’t agree, it is part of the job to give your opinion and highlight the strengths and weaknesses of the suggested approach. You need to have a relationship and mutual trust in order to do that.

If the manager decides he still wants to adopt this initial approach, it’s about switching your focus to supporting that idea and vision 100%.

What do you do during training?

We always have someone who films our training sessions with a drone, which gives us a more tactical view of what’s happening. I’ll code that, bearing in mind the kind of session we’re doing. Afterwards, we’ll sit down as a backroom team to review training and see how it corresponded to the tactical approach. If Roberto likes something, I need to keep that in mind and filter it. As an analysis team, we might look at a total of 12 hours of footage, but use only six minutes to show to the team.

On camp, we have a number of different devices available for the players to see the attacking player profiles of the opposition, how their defenders defend, how they receive the ball under pressure and so on. We have an environment where the players are able too empower themselves and choose what additional individual information they want.

As the weeks and days go by, the players will get a very clear idea about how we want to play both as a team and individually and they will get clear instruction about the opposition.

What do you do during a match?

During matches at the 2018 World Cup, Fifa provided the tactical high behind (the goal) camera as well as TV footage, but Roberto only works off wide angles on the halfway line, so we filmed our own wide angle there. I then took the feed of the high behind camera up in the press tribune.

Our goalkeeper coach, Erwin Lemmens, was on the bench and had a headset enabling him to radio up to me and communicate what the manager and coaching staff wanted. Because of the way we work, we know what we’re doing tactically going into each game, so I would base my live codes around this tactical approach. In the first half, I reviewed how that had or hadn’t been successful.

At half time, I ran down to the changing room with the wide angle footage and showed examples that had been requested or ones I had been proactive in gathering.

When the manager comes in at half time, he always has a good idea of what he wants to show the players and it’s my job to guide him with the video. He’ll often have seen something on the pitch and will just need to see it again - which is where the power of the analyst comes in. If you can enable the manager to intervene with effective video footage at half time that’s the perfect scenario.

We go into the coaches’ changing room - most grounds have one - and the manager goes through the clips he’s picked and I show him the ones I have and we come to a decision about what to show the players. We filter it ourselves for two or three minutes and then go and show it. 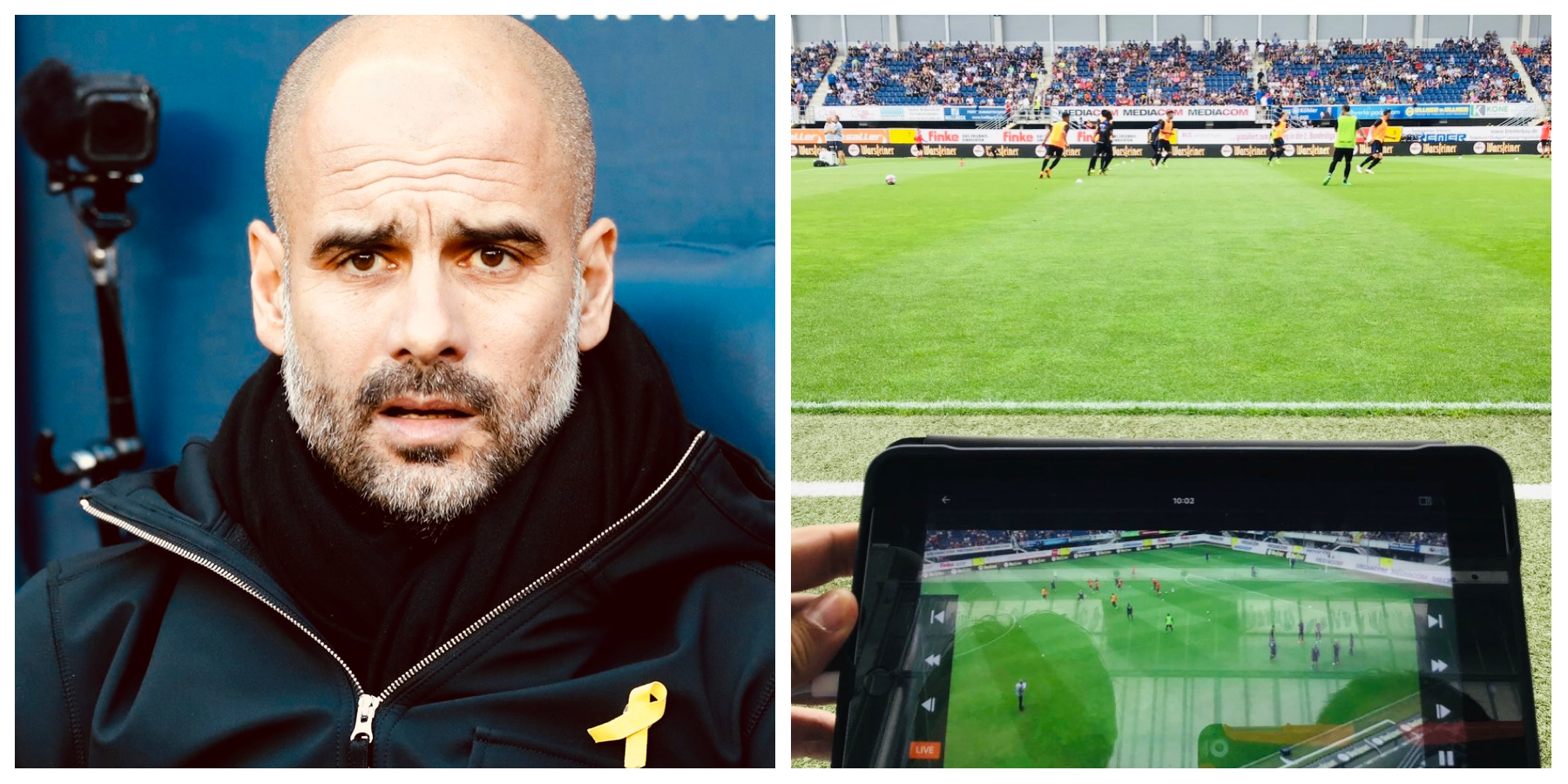 READ MORE: How video on the bench will transform coaching

Those clips will then go onto the screen in the changing room and the manager can be interactive with the software we use - just like you see with Gary Neville or Jamie Carragher on Monday Night Football - to make it more engaging for the players. We bring a big touchscreen TV with us to every game and put it up in the changing room beforehand.

We always show something, regardless of the score or performance. You’ve done all the work with the manager during the week and this is when it matters. This manager is very visual, which is great for the players.

Everything I do is through Sportscode and this is why we wanted to go with Hudl as a federation - because we know the power of their products. 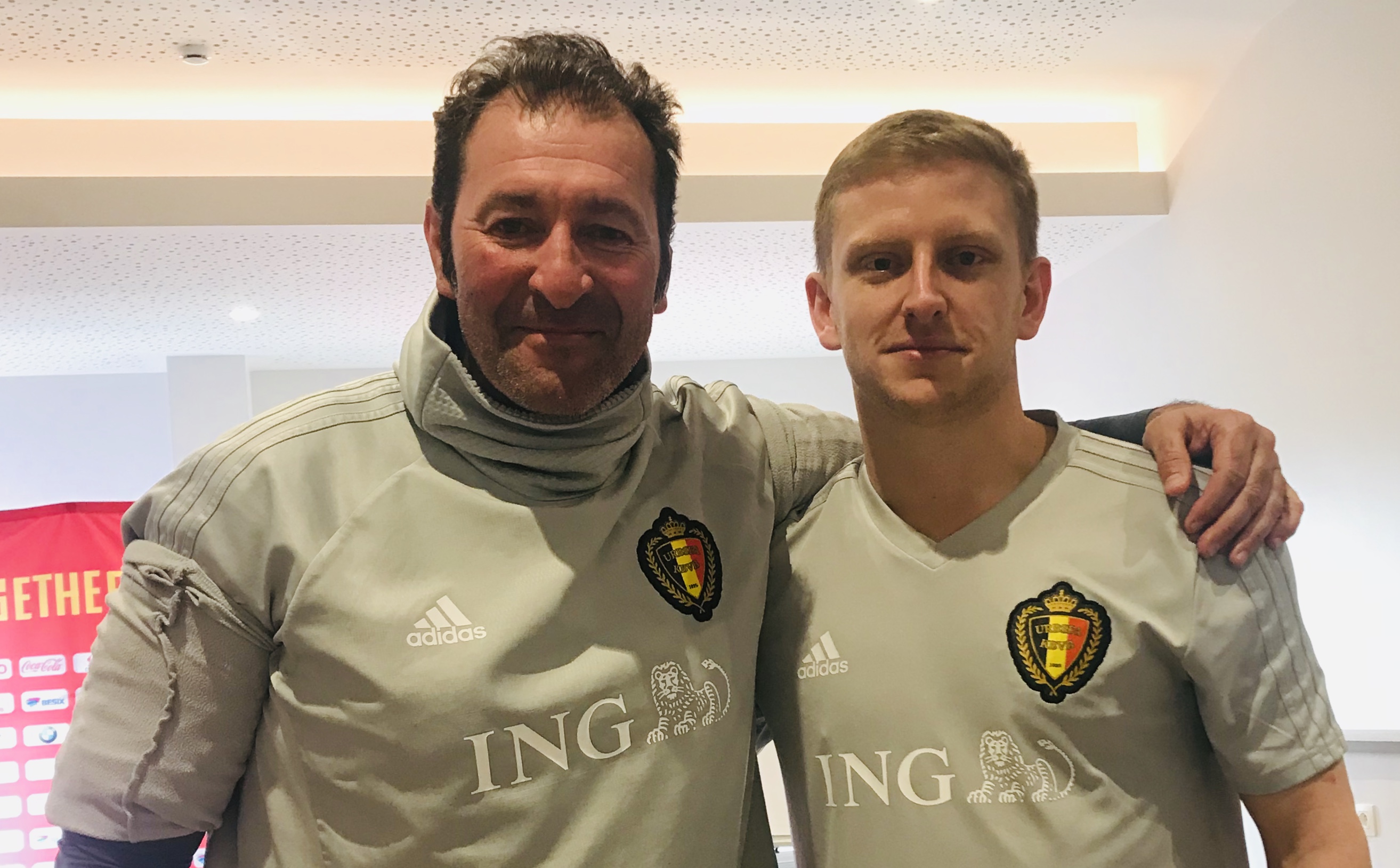 During the second half is when the Hudl Replay product comes into its own. We stream our wide angle live on the bench using Hudl Replay on tablets - whatever we are filming on the gantry gets streamed live on the bench - and as I’m coding, certain codes will go onto the connected iPads too.

With Russia for example (when Belgium beat them 3-1 in Euro 2020 qualifying at the end of March), they changed their shape and brought a player on, so I did a few examples of in and out of possession and radioed to the bench to say, ‘just let the manager know these clips are in this playlist on Hudl Replay so he can see the shape from a higher view’.

Sometimes it informs a decisions; sometimes it’s nice to just see the shape and where the spaces are. That’s what’s kicked us on most I think: now we’ve got a wide angle live on the bench, so the intervention can happen live in the second half of a game as well.