MANAGERS don’t usually take recruitment staff with them when they join new clubs, but with Graham Potter it's different.

When the 47-year-old was named Chelsea’s new Head Coach on Thursday, it was announced that five staff would be moving with him from Brighton: assistant Billy Reid, first-team coaches Bjorn Hamberg and Bruno, goalkeeping coach Ben Roberts and Assistant Head of Recruitment Kyle Macaulay.

Potter and Macaulay have an association that goes back a decade, starting at Swedish side Ostersunds FK.

Macaulay was 26 and playing semi-pro football while completing a degree at the University of Stirling when he wrote a letter to Potter asking about playing opportunities at the club.

“He got back to me saying that his squad was full, but he was looking to recruit staff,” the Scot remembered. “I think my University coach James had put in a good word and I ended up heading out on a six-month internship.

“I thought it would likely be six months in Sweden, gain experience, and then head back to the UK looking for a job.”

When he arrived in northern Sweden in April 2012, he was “at a bit of a career crossroads”, not sure whether to pursue playing or coaching, but his mind was soon made up.


“My role has gradually grown to the point that I don’t really miss playing," Macaulay said in a 2013 interview. "I’ve got that hunger as a coach or analyst, which I didn’t have as a player by the time this opportunity came around.


“I’m involved a little bit with the training. In the day there are various tasks… on the recruitment side there are emails from agents [and] lot of work watching the games, the teams we are about to play. Last year and this year we have a contract with Prozone, who do the match analysis in various levels.”

Macaulay was born in Elgin and is the nephew of former Aberdeen boss Steve Paterson. He left school at 16 to join Derby County, but was released after two years at Pride Park.

He was then signed by Paterson, at Aberdeen, and made his debut in February 2006 against Hearts at Tynecastle, although he didn't manage to establish himself in the side and went on to play at Peterhead and Alloa before reaching that crossroads.

At Ostersunds, he became part of an inner circle of staff which still exists to this day: Potter at the helm; Reid, the former Clyde and Hamilton Accies manager as assistant; Hamberg as analyst and then first-team coach; and Macauley, who has evolved into a Head of Recruitment.

They all immersed themselves in the local culture and in 2017 we wrote this piece about a concert that Potter, his players and staff had put on outside the Jamtli Museum in the town, dedicated to the indigenous Sapmi tribe, also known as Laplanders.

Macaulay, took to the stage with a microphone and delivered this rap:

Scottish born in 1986,
Not from the streets but the Highland sticks,
That’s all I can say to the audience, hey,
Over and out from Kyle Macaulay!

Reports are that Chelsea have paid £20m compensation to Brighton for Potter and a further £2m for his travelling group of assistants, who now number five, with goalkeeper coach Roberts and first-team coach Bruno having been added to the mix.


Potter achieved remarkable things at Ostersunds, leading a previously unfashionable team to three promotions, the Swedish Cup and the last 32 of the Europa League. In June 2018, Championship side Swansea came calling for him and Macauley went too, now taking on the title of Head of Recruitment. 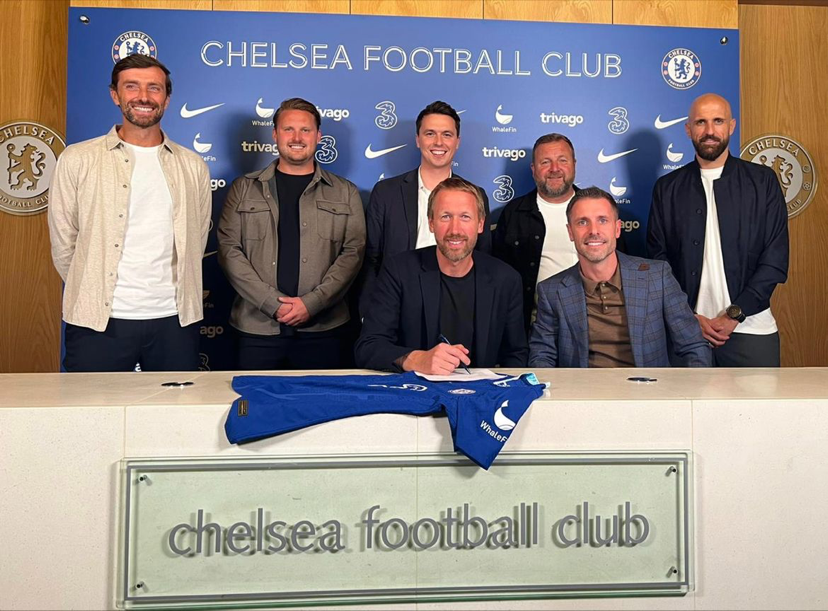 “This is a very exciting opportunity for me,” he said. “I obviously know Graham very well from our time at Ostersunds and I’m delighted to take up the role. I am very aware of how Graham works and what he wants.

"What we want to have is a clear and simple system where everyone knows exactly what is required of them. We want a really committed recruitment team who know exactly what Swansea needs.”

After a single season, with a 10th-placed finish in the Championship, Potter and his staff moved on to Premier League Brighton. This time Macaulay’s title was Assistant Head of Recruitment.

The head of the recruitment department was Paul Winstanley and an insiders said the pair dovetailed well together.

“Kyle would think how Graham thought and know exactly what he wanted in terms of player profiles, because of all their time together,” the source told TGG. “Paul would oversee the wider department, which is quite data-driven, with Kyle looking at individual players. Kyle has a very analytical mind and is a good operator.”

At Chelsea, his remit is likely to be similar, although the club in a state of flux at the moment. As TGG reported last week, Head of International Scouts Scott McLachlan has departed the club after 11 years, while Director Marina Granovskaia and Technical and Performance Advisor Petr Cech left at the start of the summer.

The fact that Potter has been given a five-year contract - and has been allowed to bring five staff in with him - suggests he will have a big say in the future direction of the club, with Macaulay key.

Meanwhile, three staff have left the West London club along with manager Thomas Tuchel, who was sacked on Wednesday: assistants Arno Michels and Zsolt Low and video analyst Benjamin Weber.