PARIS start-up SkillCorner had just finished working for betting clients at the 2018 World Cup when the call came from Liverpool’s Head of Research, Ian Graham.

“He’d seen some of our data visualisations and said: 'If you’re doing this from broadcast for the World Cup then this could be interesting for us in player recruitment,'" remembers the French company’s co-founder, Hugo Bordigoni.

At that time, SkillCorner were providing betting companies with live animations showing the location of the ball and players during football matches for use on their websites. Liverpool spent a year helping them develop this into a performance product, before signing a contract with them a year ago.

So what was it that Graham saw in this relatively obscure French company?

The answer, in short, is tracking data, that goldmine of positional co-ordinates that clever data scientists can turn into valuable insights.

Whereas traditional event data tells you what happens on the ball during a game, such as the number of passes, tackles and shots, tracking data reveals the position and movements of every single player in every single moment of a match.

This totals more than a million data points per 90 minutes, enabling a data scientist to calculate things such as the pressure a player was under when they made a particular pass, whether they broke the lines and if they made the best possible decision in a given situation.

EVENT: Paul Neilson will be speaking at Big Data on December 15th

This is all crucial information for a club is trying to build a comprehensive picture of the capabilities of a potential transfer target.

Premier League clubs are well-covered when it comes to getting tracking data for players in their own league. England's top flight is about to embark on the second season of a three-season deal with US firm Second Spectrum to provide tracking data for all of its games, with data being captured at 25 frames-per-second by a series of cameras in every stadium.

So far, so good. But the problem for the likes of Liverpool was that these deals only cover individual leagues, meaning data is not shared beyond them.

As Bordigoni explains: “Liverpool were happy with the tracking data they got for the Premier League and Champions League, but if they wanted to scout players in France, Spain, Germany and beyond - which of course they do - then they couldn’t access the data from those countries.

This is where SkillCorner come in. They are different to the likes of Second Spectrum, because they derive tracking data from HD video footage rather than from their own cameras in stadiums.

They are able to do this with any HD video feed, but mainly with footage from video scouting platform Wyscout, with whom they have a partnership. SkillCorner currently gather tracking data from 23 global competitions (21 leagues plus the Champions League and Europa League) and aim to cover as many as 40 within the next 18 months.

Now Liverpool can get raw tracking data (giving the x and y co-ordinates of every player, the ball and referee, plus the z co-ordinates of the ball, at 10 frames per second) for every game in 23 competitions.

This enables them to do detailed analysis on potential transfer targets, compare them, and to benchmark against Jurgen Klopp’s style of play and physical requirements.

After signing up the then-European champions as their first football client, SkillCorner now have deals with clubs in England, France, Germany and Italy, and are in advanced talks with several others.

HOW DOES BROADCAST TRACKING WORK?

There are two main elements to what SkillCorner do.

The first is tracking - ie finding out the position of the players and the ball every 10th of a second, which enables them to calculate movements of players as well.

“We are analysing frame by frame out of the broadcast footage, automatically detecting the players and ball,” explains Bordigoni, a French data scientist who co-founded SkillCorner with Commercial Director Charles Montmaneix in 2016.

“We are finding what we call homography, which is the position of the camera and what it’s looking at, so that when we detect a player we know exactly where they are on the pitch at that moment.”

The other main element of the process is player identification, which is done using machine learning. 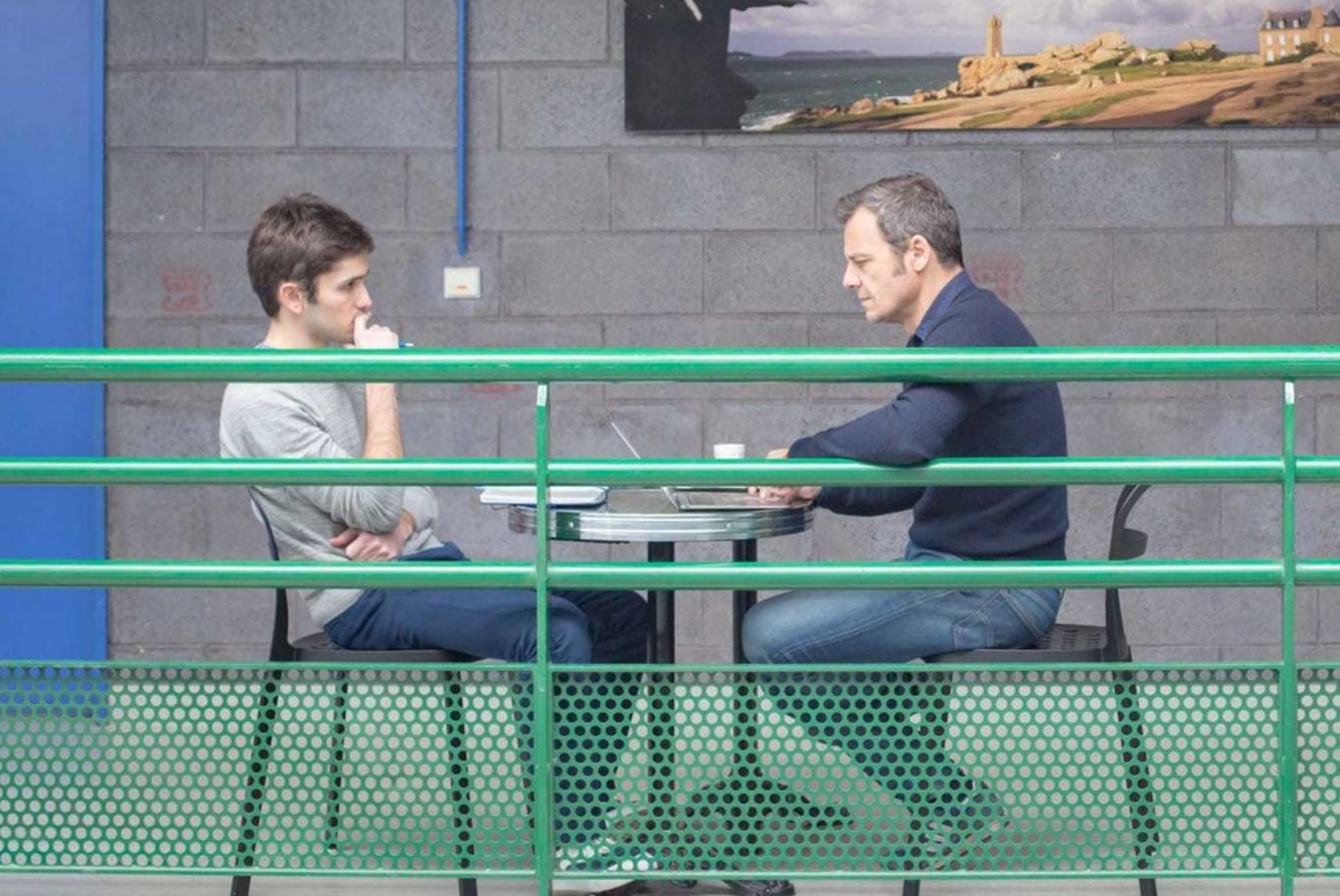 “We are training algorithms to recognise players,” says Bordigoni. “We are feeding tens of thousands of images of the players detected and training the algorithm in how to recognise them.

“Fifty per cent of our team is technical guys working on the machine learning algorithms.”

Industry veteran Paul Neilson, previously of Hudl, STATS and Prozone, is working with SkillCorner as a consultant in the UK.

He adds: “With the developments in machine learning, we are able to process a lot more data simultaneously than we ever could with the human eye.

“The player identification is fully automated and done by looking at things like hair colour, skin colour, height and even gait, and can be scaled across competitions. The final data is standardised and consistent, which is very important.”

One issue with this type of tracking is that not every player is in every frame of the broadcast feed, a limitation that Bordigoni is quite open about.

“We know this isn’t perfect, but broadcast tracking is the only way to do recruitment and that isn’t going to change in the near future," he says.

“We have to be really, really smart to estimate where the players are, even if we don’t see them in that particular frame. We’ve tested the raw data in different stadiums for different games and it’s very accurate."

The final (and perhaps most important) question is what are clients doing with this tracking data? This is something Liverpool choose to keep to themselves.

“They do the modelling on their own and that is their intellectual property,” says Bordigoni.

But what we do know is that the Premier League champions are able to build rich context using tracking data.

"If there was a pass at 3 minutes 42 in a particular match, then they can look at the tracking data at this exact frame and say: 'There was this pressing on the player, on the receiver, these were the options he had,'" says Bordigoni.

“It is not really interesting to know that a player completed 90 passes during a match, but with our data you can assess every pass - whether there was a better option than the one the player took.”

Few (if any) clubs have Liverpool's level of data expertise, but SkillCorner are able to provide clients with analysis and insights if necessary.

“Not a lot of clubs are staffed like Liverpool to handle large amounts of data,” Bordigoni admits, "and others will say ‘give us some directly actionable insights.’ 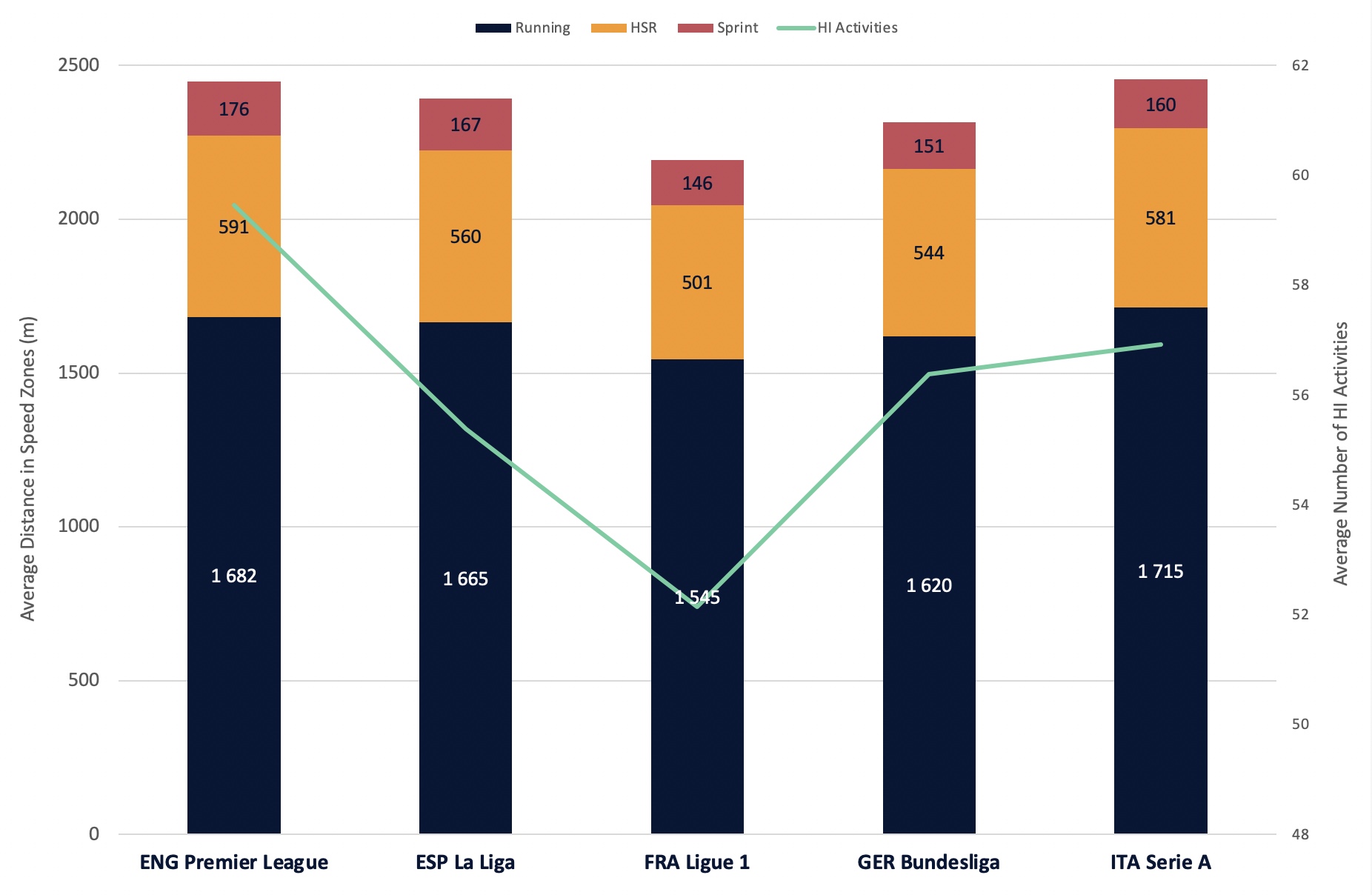 The company have produced a series of data insights packages, the first of which is about physical outputs in the five major European leagues. You can see a graph from the report above, showing running loads in the Premier League, La Liga, Ligue 1, the Bundesliga and Serie A.

The metrics used in the package include distances covered, number of sprints and number of high-intensity sprints. A technical package is coming next.

This is likely to be widely welcomed, because one thing that all clubs, no matter their size, want to do is carry out due diligence on potential signings. After all, player trading is the biggest regular expense for most teams.

“We see some really large amounts of money being spent, even this summer,” says Bordigoni, “so you shouldn’t avoid spending a relatively small amount of money for tools like we have.”