Which is the most physically demanding league?

THERE has been a long-standing debate about which is the most intense league in Europe.

West Ham’s Brazilian winger Felipe Anderson described the difference between the Italian and English Premier League as “incredible” after signing for the Hammers in the summer of 2018.

“It’s a big difference,” he said. “I felt, in my first 10 games, that I couldn’t play more than 70 minutes because of the intensity."

Former Chelsea coach Maurizio Sarri concurred. “In Italy, we run more in terms of quantity but the difference (with the Premier League) is the quality,” he said.

However, Pep Guardiola was less convinced.“I hear a lot of times about the intensity in the Premier League when none of you have been in La Liga or the Bundesliga to know how intense it is”.

In truth, it has been difficult to answer these questions objectively, because detailed physical data from official tracking providers is generally not available outside of the league in question - plus the data is not standardised across leagues. 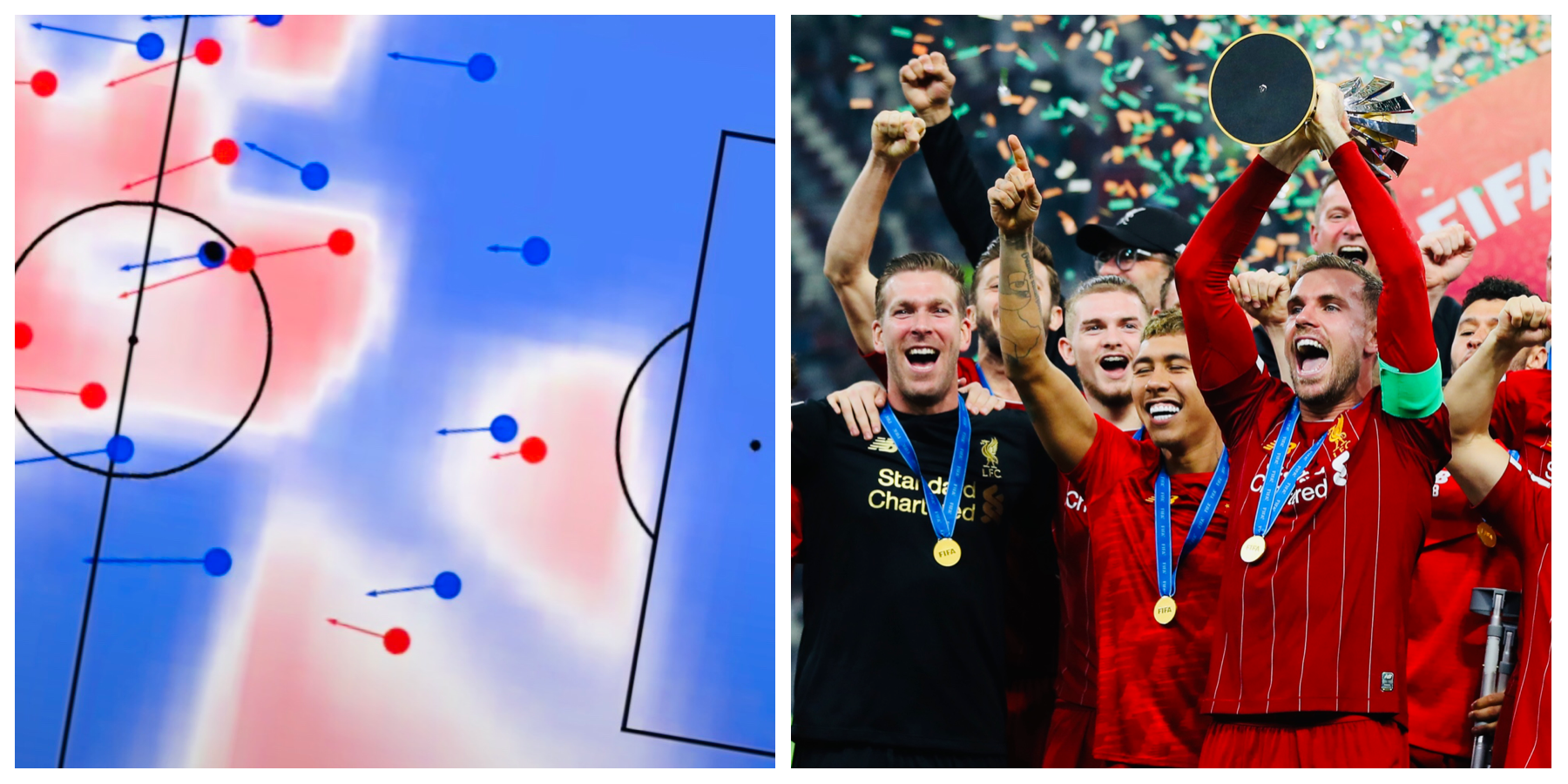 READ MORE: Why Liverpool hired a start-up to turn video into data

However, new broadcast player tracking technology applied systematically across the ‘Big 5’ European leagues has, for the first time, allowed the physical demands to be compared objectively in a standardised way.

We wanted to finally answer this question of which league is the most physically demanding, by analysing physical performance according to three categories commonly used in sports science - intensity, sprinting and volume.

For this analysis, we utilised SkillCorner broadcast tracking data on all outfield player performances (over 75 mins in duration) in the ‘Big 5’ European leagues throughout the 2019/20 season up to the COVID-19 shutdown in early March 2020. 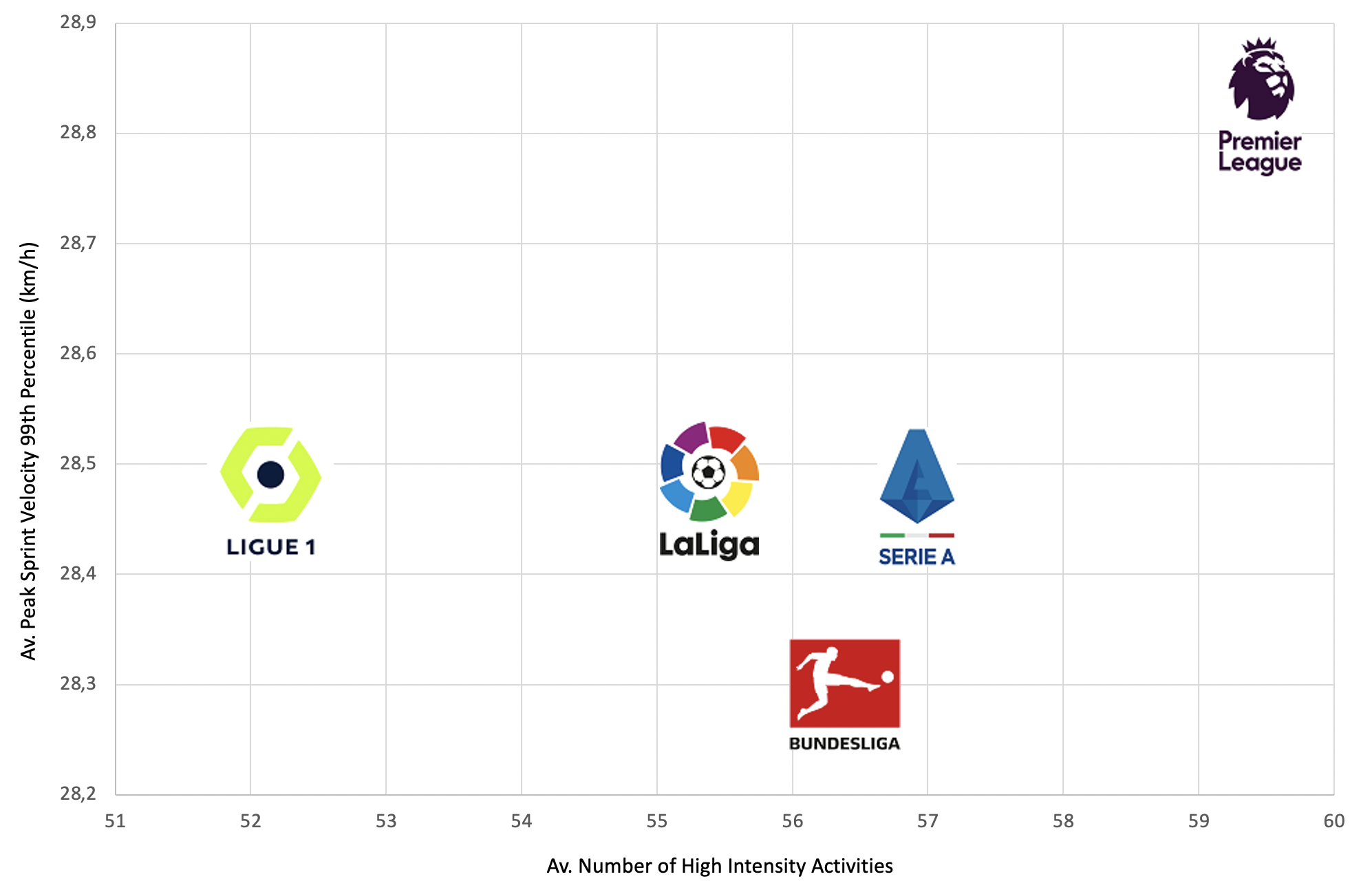 You can see from the chart above that the highest demand was in the English Premier League.

For sprinting performance, the chart below compares the average sprint distance, in metres, with the average number of sprint activities. 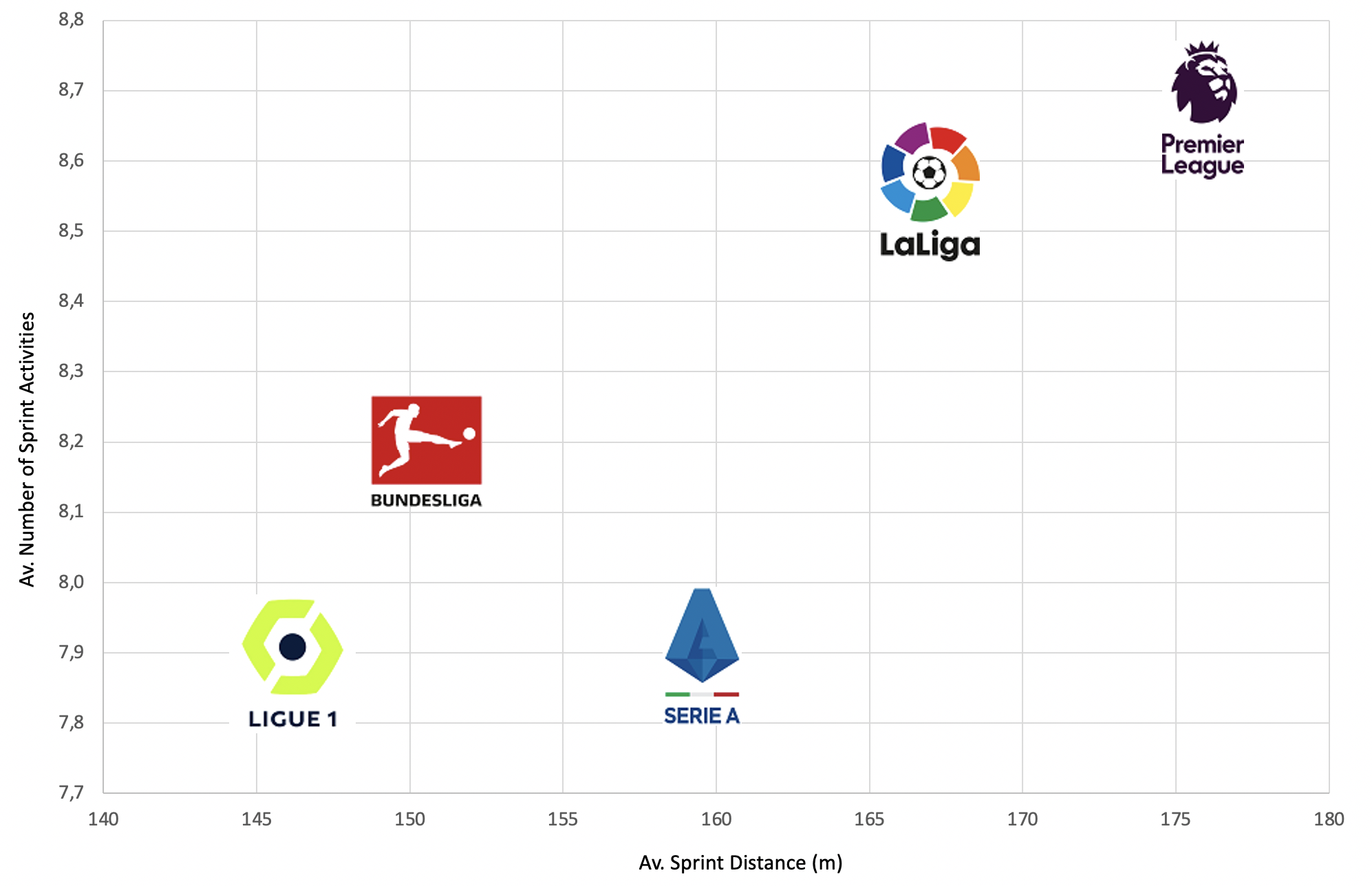 Similar to the intensity visualisation, we can see the English Premier League generating higher sprinting outputs relative to the other leagues, although the Spanish league provides a similar output in terms of number of sprint activities.

For overall volume, the chart below compares average high-intensity distance plotted against average total distance (both in metres). 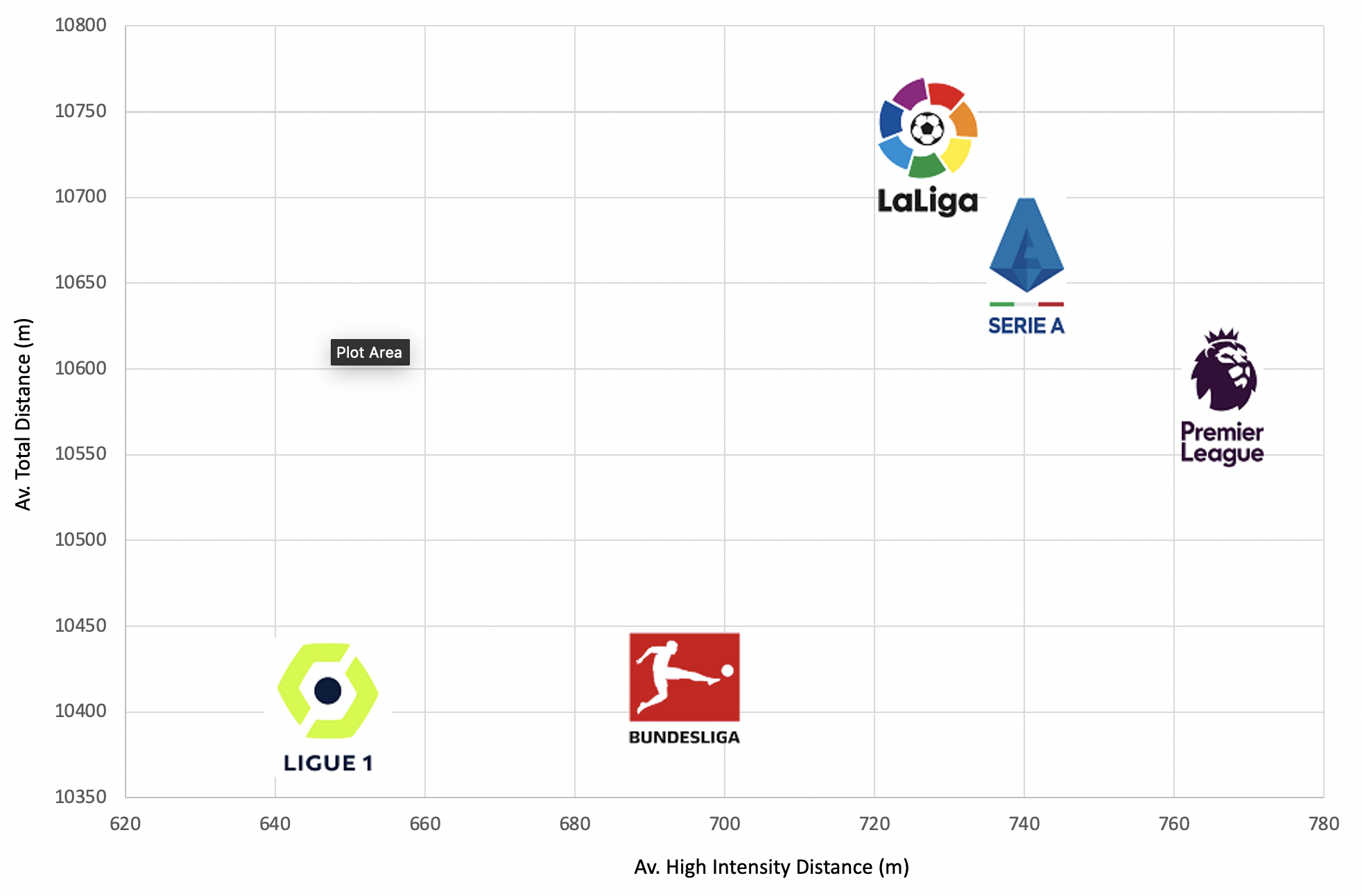 Here we can see that Spain's La Liga and Italy's Serie A actually record the highest total distance data, which is consistent with Sarri’s observations when comparing his experiences in England and Italy.

Albeit, we can also see that the English Premier League records the highest HI distance outputs, with France Ligue 1 and Germany Bundesliga noticeably different.

Finally, we visualised running loads for each league, with the chart below showing average player distance in speed zones above 4.0 m/s, overlaid with the average number of HI activities. 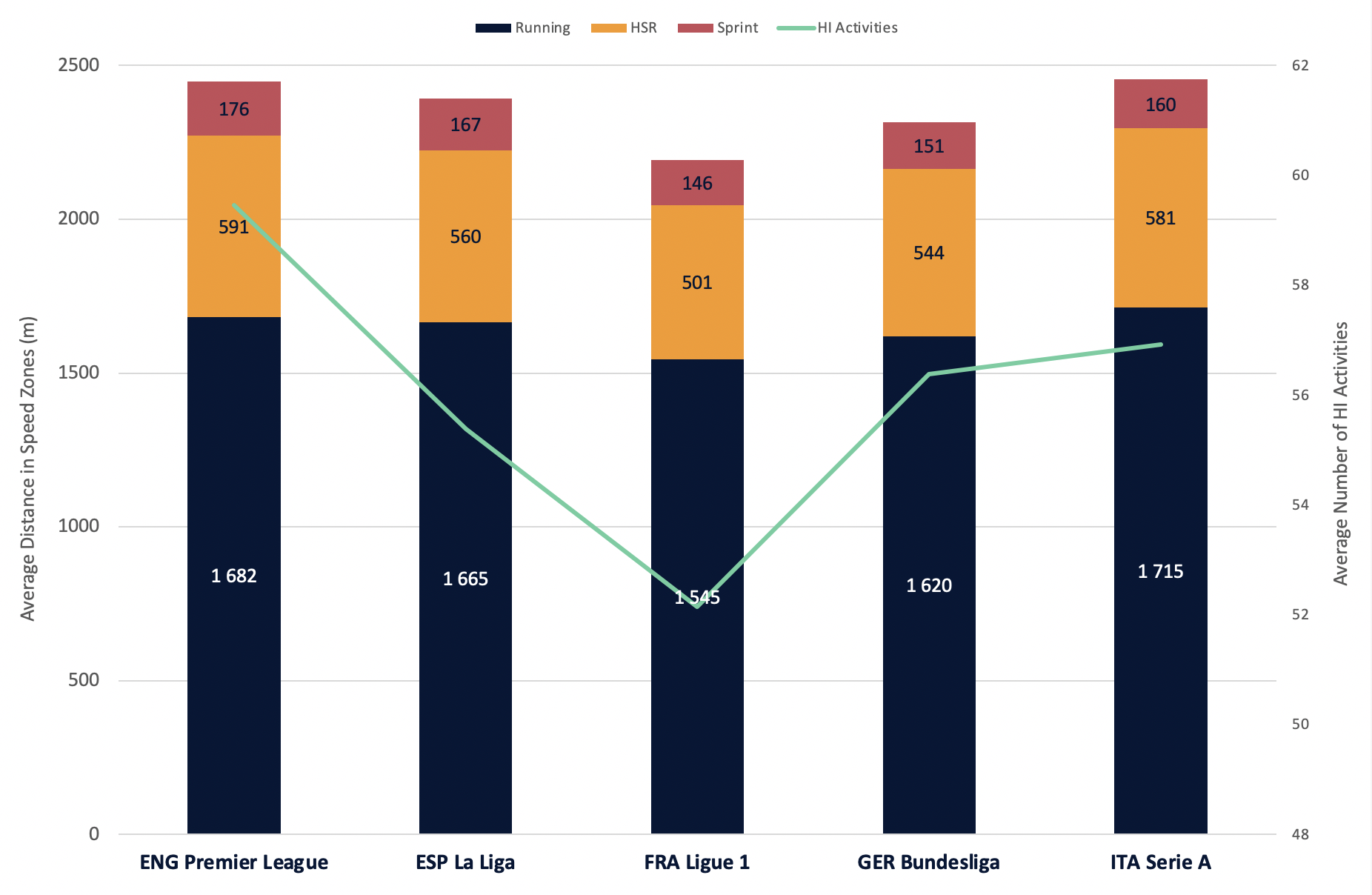 Overall, our analysis has shown that English Premier League is the most physically demanding, with France's Ligue 1 generally providing the lowest numbers of high-intensity running and sprints relative to the other leagues.

Using objective data collected on all 2019/20 Champions League games from the third qualifying round (commencing 6 August 2019) to the enforced stop due to Covid-19 on 11 March 2020, we are also able to see which teams produced the highest physical outputs. 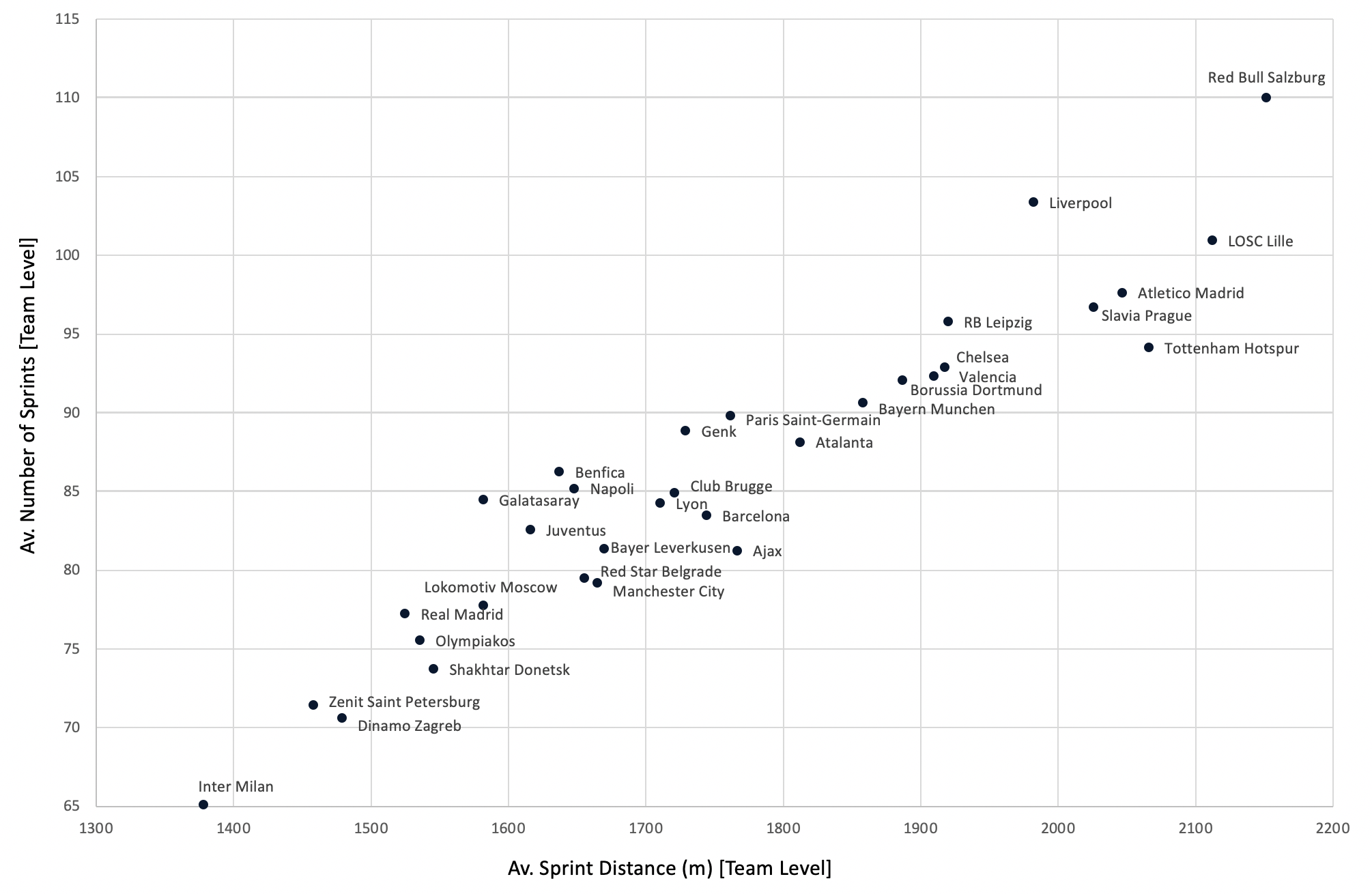 In terms of overall intensity at a player level, the chart below shows the average number of high intensity (HI) activities plotted against peak sprint velocity (PSV-99). 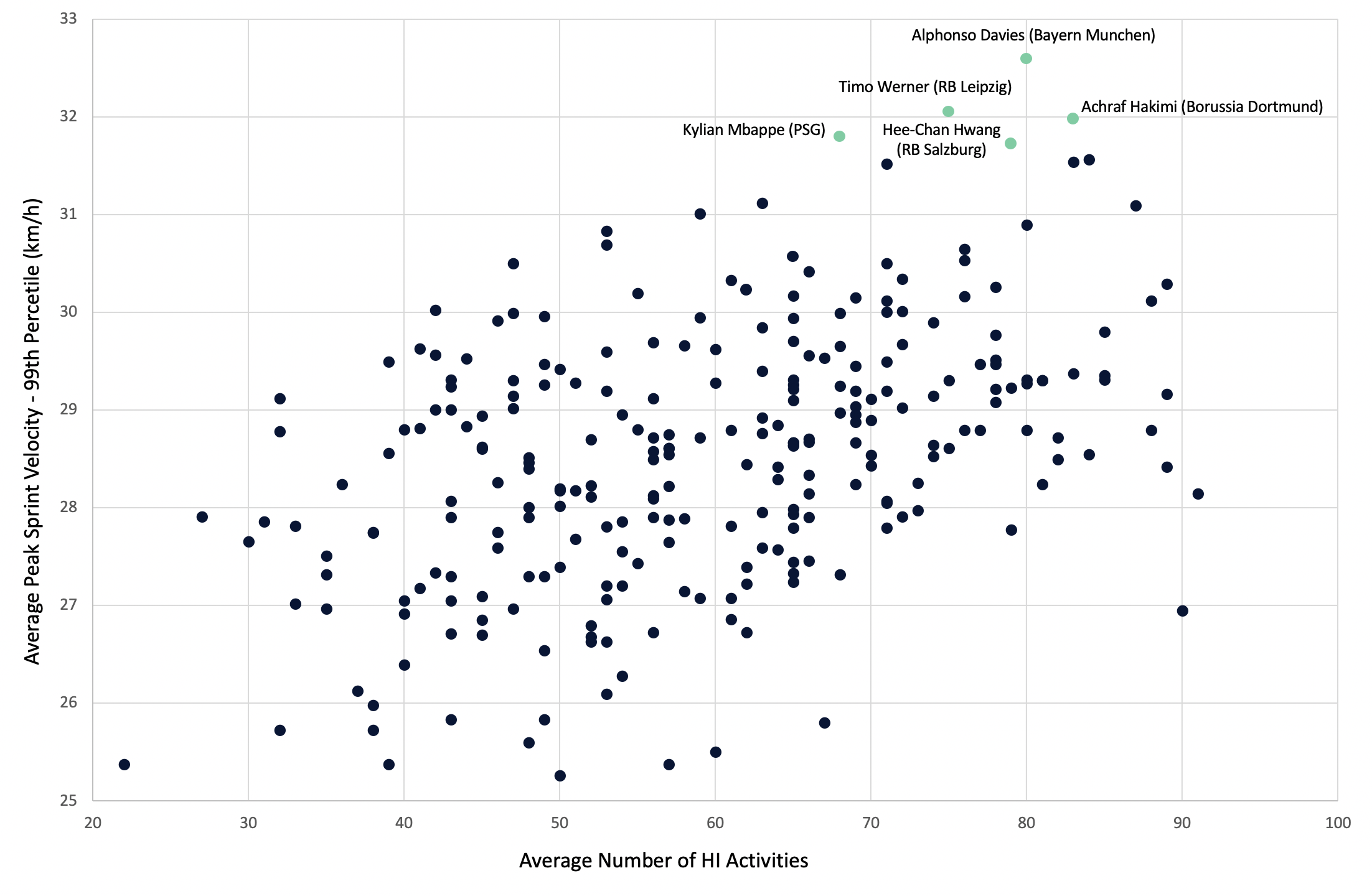 It is perhaps not surprising to find two players from Red Bull owned clubs in the top three, given the Red Bull group is known to encourage a consistent philosophy and playing style across their teams which requires high physical loads.

This might also help to explain why Liverpool have signed a trio of players - Sadio Mané, Naby Keita and Takumi Minamino - with Red Bull links over the course of the last few seasons.