Waskett has worked for Liverpool since 2012

IT’S fair to say that Tim Waskett is someone who prefers to stay under the radar.

On his LinkedIn profile, it says ‘not at liberty to say’ next to employer. On his Twitter account, he describes himself only as ‘indie games developer’.

Nowhere is there so much as a hint that Waskett is a key member of Liverpool’s research team, widely regarded as the finest data science unit in English football.

Since 2012, the astrophysicist (he has first-class honours in the subject from Cardiff University) has been a software developer and statistical researcher for the current European champions.

This week he emerged from anonymity to give an insight into his work in the annual Royal Institution Christmas Lectures.

The overall subject of the Lectures was ‘Secrets and Lies: The Hidden Power of Maths’ and Waskett spoke to host Dr Hannah Fry and the young audience about the work of Liverpool’s research team and data scientists in general.

You can watch him HERE, from 28'24" and read a transcript below:

Tim Waskett: The primary currency every game is based on is goals, obviously. It’s our job to turn every action on the pitch - every pass, every throw-in, every tackle, every shot - into a goal probability.

(Ian Graham, the head of Liverpool's research team, has previously explained how the metric is called goal probability added - ie what was the team’s chance of scoring a goal before this action happened).

This (goal probability diagram, above) is taken from literally hundreds of thousands of shots through major leagues all over the world. By looking at where the shots take place and how often they became a goal, gives us a probability of a shot from a similar situation becoming a goal.

We can do a similar calculation for every other event on the pitch, any time the ball is passed for example.

For roughly 200 games per weekend we get data involving every single ball touch in the game. And for every game, we get approximately 2,000 ball touch events.

Every second or so there is a new pass, so it’s pretty frantic. Thankfully, it isn’t us (Liverpool) who have to do this work - we have a data supplier who provides these files for us.

Every time a player passes the ball, they will say, ‘this is the position on the pitch and the player who made the pass’. Then there will be someone watching for the other team and marking their passes. Two people will be going backwards and forwards and marking all these events.

What event data doesn’t tell you is where all of the other players on the pitch are at that moment.

For Premier League games we get what is called tracking data. This is a set of cameras all around the stadium monitoring the position of all the players plus the ball.

It does that for 25 frames a second, for the full 90 minutes, so you end up with approximately 1.5 million data points.

This data can give us a goal value for every position and for every player on the pitch. This is what we call pitch control. 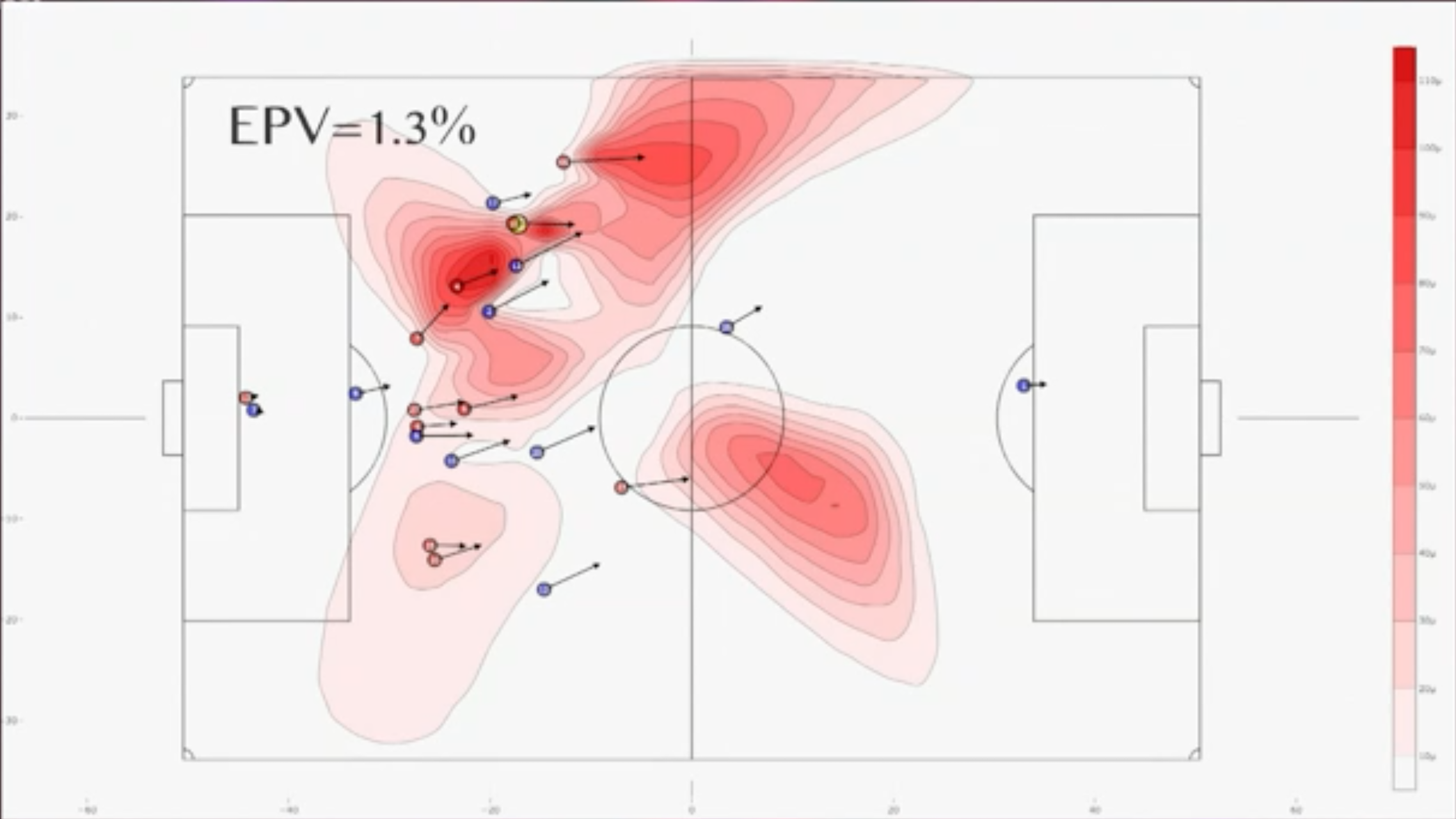 (In the diagram above) you can see the players are in the circles and the arrows represent the direction and speed they can travel in.

The red team is Liverpool and the areas in red are the places they can get to sooner than the players in blue. The ball is the yellow dot. For the man in possession, Sadio Mane, his best option is to pass to one of these red areas.

Everything is turned into a goal probability and this value, 1.3%, is the probability that a goal will be scored with the ball in this position within the next 15 seconds.

We use this information in a number of ways. The main one is to evaluate player performance after the game.

The advantage is we see all the players at the same time, which means we can analyse all the players in the Premier League and a large number of players in other leagues around the world using the ball touch event data and that gives us some really good information on which players are doing well and who we might be able to sign in the future.