The future's orange: Why more athletes are wearing SleepSpecs

AMBER-LENSED glasses could soon become the apparel of choice for top sportsmen and women.

SleepSpecs are already worn by Bournemouth FC players, the Golden Lions rugby team and, most recently, Northern Ireland's athletes at the Commonwealth Games. This is more than just a passing fashion fad though.

With good sleep recognised as key to recovery and performance, elite teams need to ensure it can happen in a world flooded with electronic light. This is where SleepSpecs come in.

The science behind them is simple to understand but very effective. The amber lenses filter out the blue light emitted by electronic devices such as laptops, mobile phones, TVs and computers. Blue light, also emitted by the sun, fools the body into thinking it’s daytime and suppresses natural production of the sleep hormone melatonin.

Melatonin needs to be produced for at least two hours before bedtime to ensure a good night’s sleep.

SleepSpec was the brainchild of Dr Robert Daniel, a specialist ophthalmologist from Sandton, Johannesburg, who wanted to combat the damaging effect electronic devices were having on sleep. Expecting people to give up their devices seemed unrealistic, so he set out to find another solution.

As reported by TGG, Bournemouth started using them last season – as part of a ‘sleep pack’ containing a high-quality eye mask and amber-tinted torch (which doesn't emit blue light) as well. 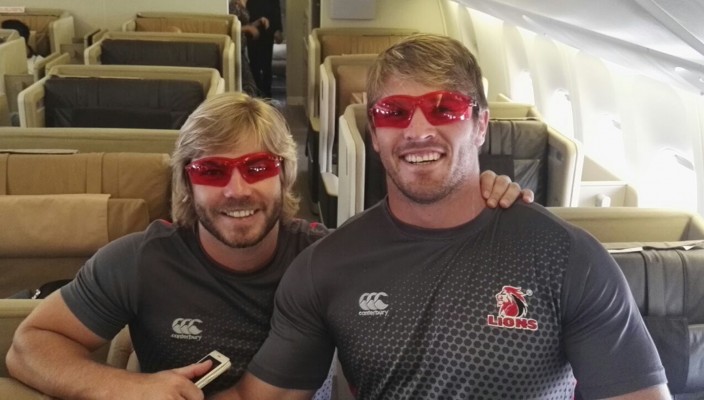 “Sleep is increasingly recognised as a gamechanger,” their Head of Sports Medicine, Dr Craig Roberts, said. “We believe that getting the players to use SleepSpec will allow them to have their down time without the negative consequences.”

Roberts, the former South Africa rugby team doctor, had heard about the glasses from the Golden Lions rugby team in his homeland. The franchise has now been using SleepSpecs for three years and found them key in combatting the effects of jetlag on long trips to New Zealand, Australia and Japan in Super Rugby.

The glasses allow the players to prepare for sleep no matter the time of day.

The Golden Lions team physician, Dr Rob Collins, explained: “We monitor sleep of every athlete every day – amount and quality of sleep is individual, so we look for changes from the athlete’s norm as a sign to prevent injuries.

“Many of our athletes have definitely found that SleepSpecs have assisted them in sleeping better.”

Which brings us onto the Northern Ireland Commonwealth Games team. All of their staff and athletes used SleepSpecs for the journey to and from the Gold Coast – and to combat jetlag once they arrived in Australia.

Team physio Damian Martin said: “My colleague Dr Richard McCann, who provides physiological support to the Northern Ireland football team, circulated an article to our department which demonstrated how Bournemouth were using SleepSpec during travel to away games.

“This, in combination with the published literature, was used to inform our decision to use SleepSpec travel packs to complement the overall travel management program for the entire Commonwealth Games squad.

"So far we have received extremely positive feedback from most athletes and support staff particularly the boxing, swimming and netball teams.

“SleepSpec has helped to restrict light exposure at specific times throughout the travel period at the Commonwealth Games and has helped facilitate the readjustment of our athletes’ internal body clock, minimising disturbance to normal training and reducing the potential impact of travel fatigue and jet lag.”

The team won a total of 12 medals, including one gold, with the boxers alone claiming eight of the medals.

Away from elite sport, it’s easy to see how these distinctive amber glasses could benefit the population as a whole. At £37 for the SleepSpecs and £53 for the pack of glasses, torch and eyemask, the products should be within the reach of most people.

Sleeping disorders are an increasing problem and many of us are guilty of looking at our phones or tablets before bedtime, making it harder to get a good night’s sleep and perform to our best the next day.

At Bournemouth, Roberts said his players were not only now used to wearing the glasses, but that some were lost without them. The South African recalled an anxious player rushing over to him in a hotel lobby on the eve of a Premier League game.

“He said, ‘oh no, I’ve forgotten my pack, I won’t be able to sleep,’” Roberts remembered. “I gave him a spare and was able to say, ‘it’s ok, you’ll be alright.’ That shows they have bought into it and seen the benefits."