COVID-EDGE (left) was developed rapidly in response to the paandemic

QPR's players have had a new way of starting the day since returning to training at the start of last month.

At 7.30am, before setting off for their Harlington training ground, the squad fill out a Covid questionnaire on their mobile phones.

If any of them reports symptoms of the disease - or if they have come into contact with anyone who has - then Head of Medical Imtiaz Ahmad gets an alert on his phone.

“Then I’ll immediately call them and do a clinical assessment,” he tells TGG. “Often, it’s nothing to worry about but, if necessary, we will stop them going into the training ground and they will have to self-isolate.”

The training ground security staff also have an app telling them who can come in (green light), because they’ve filled out their questionnaire, are symptom-free and have not come into contact with anyone who has symptoms; and who can't enter (red light).

This is all part of the COVID-EDGE system developed rapidly in response to the pandemic by EDGE10 Group. It’s an example of how technology has been deployed to make training grounds as safe and healthy as possible during unprecedented times.

Preston North End are another club using the system and their Head of Performance, Tom Little, told TGG: “We need to know as quickly as possible when we can’t let someone into the training ground. That’s pivotal to stopping the spread.

“The automatic notification is invaluable, especially when we’re spread thin as a staff.”

Ahmad says the questionnaire only takes 10 seconds to fill in. The list of symptoms include fever, persistent cough, unusual fatigue, sore throat, loss of taste and smell, and can be made bespoke by each club.

At first, the players needed to be reminded to fill in their questionnaires, but soon it became second nature.

“In the beginning, as with any behavioural change, it did need reminders,” Ahmad says. “Then it became part of their routine. Because it’s quick and easy, they all do it.”

By the time QPR's players arrive at their training ground, Ahmad already has the questionnaire results, which are collated and displayed in dashboards on COVID-EDGE.

The players drive into alternate spaces in the car park and make their way to the medical room, which is adjacent to the training pitches. Their temperatures are taken with an infrared thermometer on the forehead and anything above 37.8 degrees (with a margin of error of 0.2 on either side) is a red flag, meaning they will not be allowed to go any further.

Twice weekly, the players and staff are also given a coronavirus antigen test, which is carried out by a nurse from Nationwide Pathology.

This involves a swab being taken from the nose and then the throat, with the results coming back from the central lab within 24 hours. 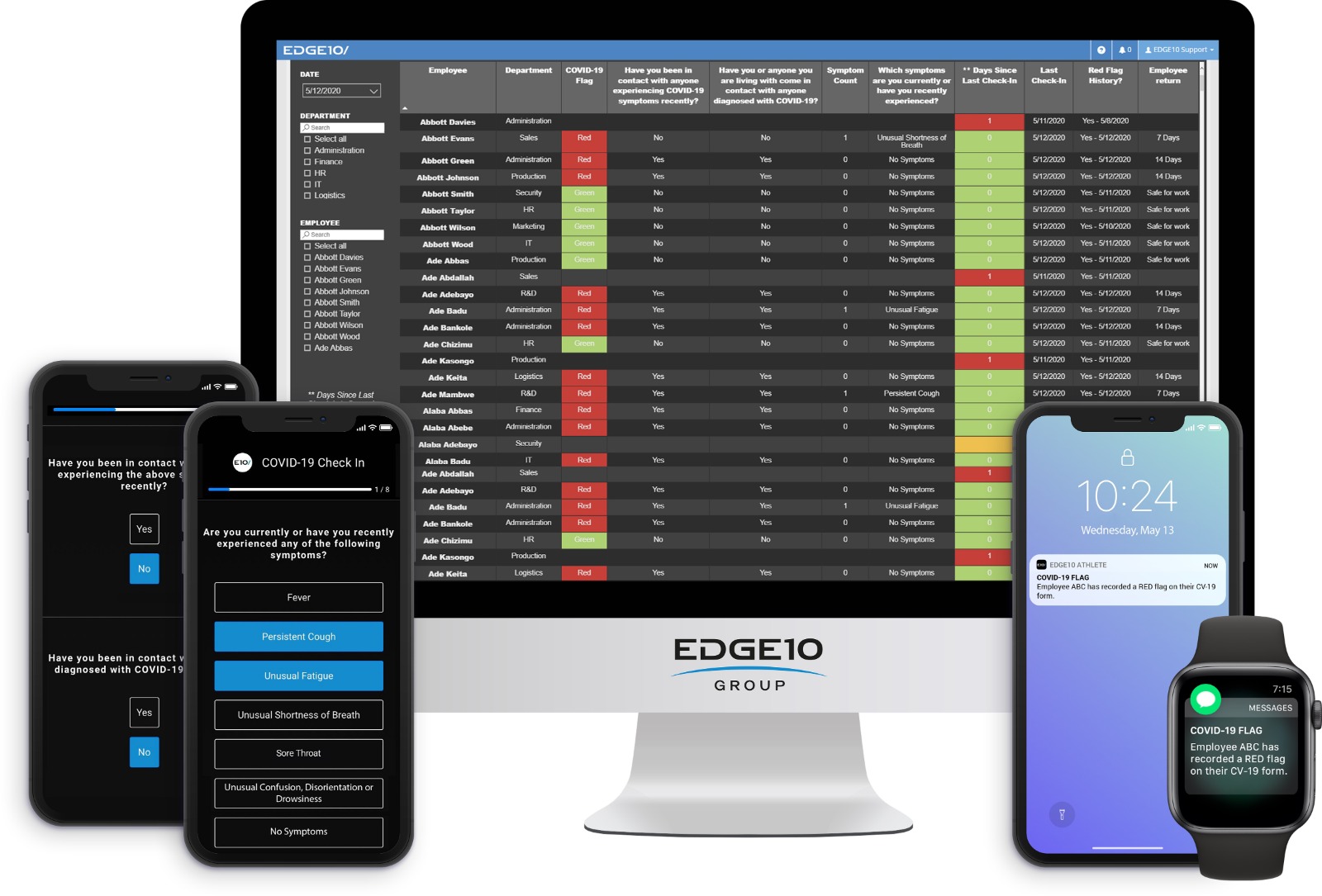 Ahmad (pictured below with striker Jordan Hugill) says this three-pronged approach of testing, temperature and questionnaires has been crucial in combatting Covid.

“The twice-weekly antigen swab test, the daily health questionnaire and the daily temperature checks, along with social distancing and hand hygiene ensure that we have as safe an environment as possible when the players turn up to train.

“Hopefully, once they’ve completed these steps they can relax and get their minds on training and playing football.”

The temperature scores and Covid test results can be incorporated into the COVID-EDGE platform, although QPR have chosen to keep their test results in a separate system.

Little says it’s a huge help to have all this information available in any place at any time. 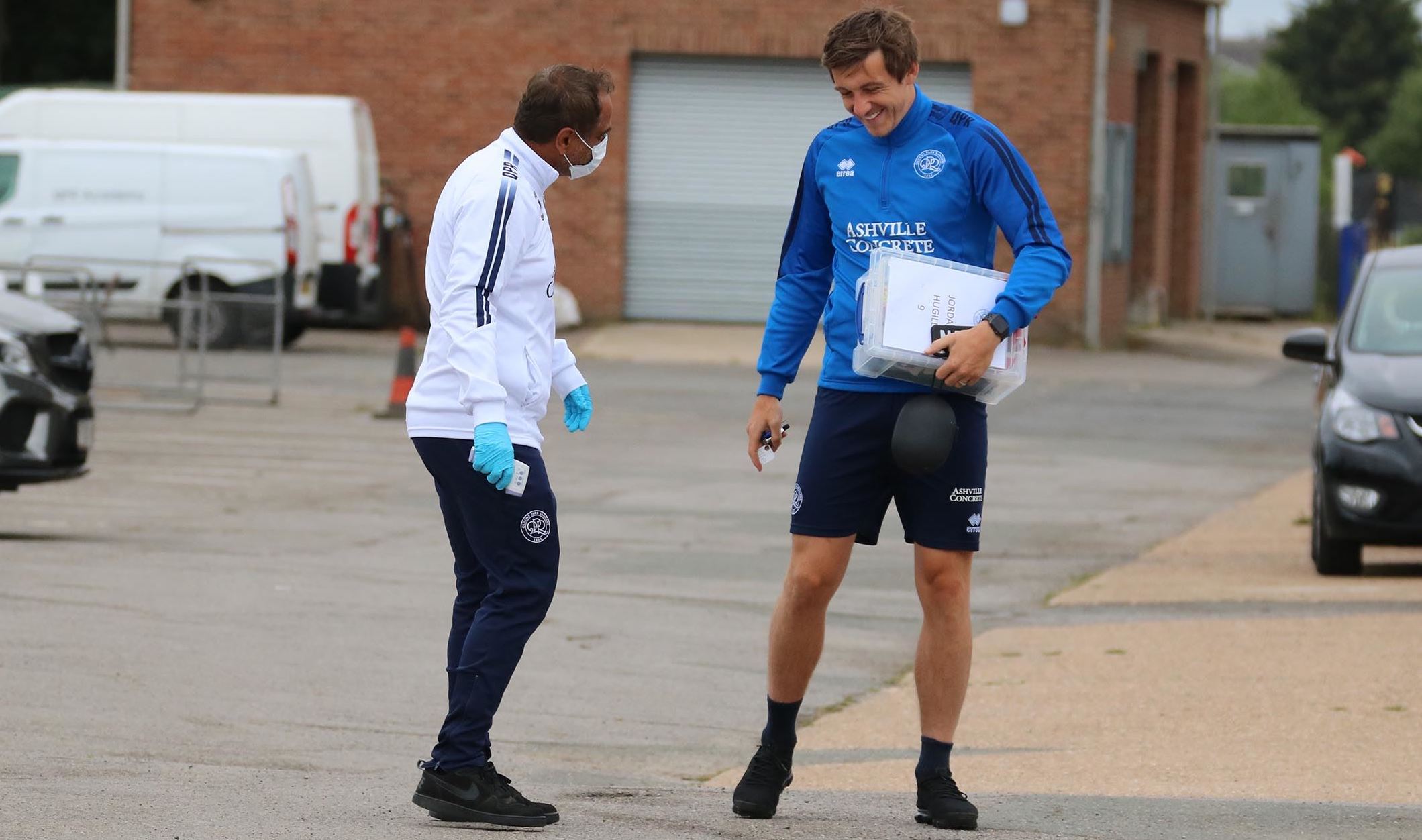 “Since lockdown, my office has been closed, along with a lot of the rest of the main building at the training ground, so I need this Covid information with me at all times. COVID-EDGE has ensured it’s available in the palm of my hand.”

The system was first trialled in the Asia Pacific Region, before being rolled out globally, including over the last two weeks to all NHL & MLB teams. EDGE10 Group has 10 league-wide deals around the world with their medical and performance solutions including the MLB, NHL, CFL and ATP as well as individual clients in the Premier League and Championship.

Their Head of the EMEA region, Dave Carolan, says the company can have COVID-EDGE up and running for a client “within a matter of hours”.

“Because it’s such a flexible system, we are able to build it around what the client needs,” says the former Head of Performance for Stoke City and Birmingham City, who has been a practitioner for 25 years.

“Some clubs also want to pull in wellness data and we can marry that up with performance data, covid data and medical data within the same environment. The speed and agility is probably what sets us apart in this environment.”

Praise for the protocols

Little says the experience of elite football in England has shown that “sport, done well, can still be played at the moment”.

In total, the EFL has carried out a total of 17,221 antigen tests, involving both players and essential staff, and there have been 49 positives. That’s just 0.28% of the total.

TGG also understands that all of those positives were asymptomatic.

Preston have had two positives themselves, involving one player and one member of staff, in their first week back at training, which were brought in from outside.

“I think we’re seeing that football is a lot safer than the general population,” Little says. “Proximity data has shown us that there’s very little contact within two metres for a 15 minute-period, either in training or matches.

"Some of the players and staff were apprehensive about coming back in at first, but the protocols have been very good and the routines are embedded.

"Now it’s just a matter of making sure we maintain the good practices.”

At both QPR and Preston, there’s a one-way system around the training ground, communal areas and closed, and food is left for players at designated pick-up points.

The return to training and return to play protocols were formulated by the Premier League’s Project Restart team. These were for the top-flight teams, although the EFL has adopted them in their entirety.

The last EFL matches were on March 8th; stage one of training (in small groups) was on May 26th; and matches resumed on June 20th. The speed and success of the process has been testament to the work of the clubs and leagues.

“This was an unprecedented situation and the science was constantly moving, so I’ve nothing but praise for the Project Restart team,” Little says.

“They’ve been nimble and the level of detail in the protocols was fantastic. I also have to give special mention to Andy O’Boyle (Premier League Head of Elite Performance), who I spoke to directly when we were doing our planning.

"He used his knowledge of football and training to make the protocols understandable and applicable. They’ve been brilliant in my opinion.”