CHAMPIONS LEAGUE players performed more than twice as many sprints over 30km/hr in 2018/19 compared to the previous season, Uefa’s Technical Report has shown.

There were 696 sprints exceeding 30km/hr in 2018/19, compared to 307 in 2017/18 and, once again, the three fastest sprints were all from Premier League players. Liverpool defender Virgil van Dijk topped the charts by recording a speed of 34.5km/hr against Barcelona in the first leg of their semi-final at the Nou Camp.

Manchester City winger Leroy Sane was second, recording 34.4km/hr against Hoffenheim away in the group stages, while his team-mate Kyle Walker came third with 34.2km/hr against Tottenham at home in the second leg of their quarter-final. 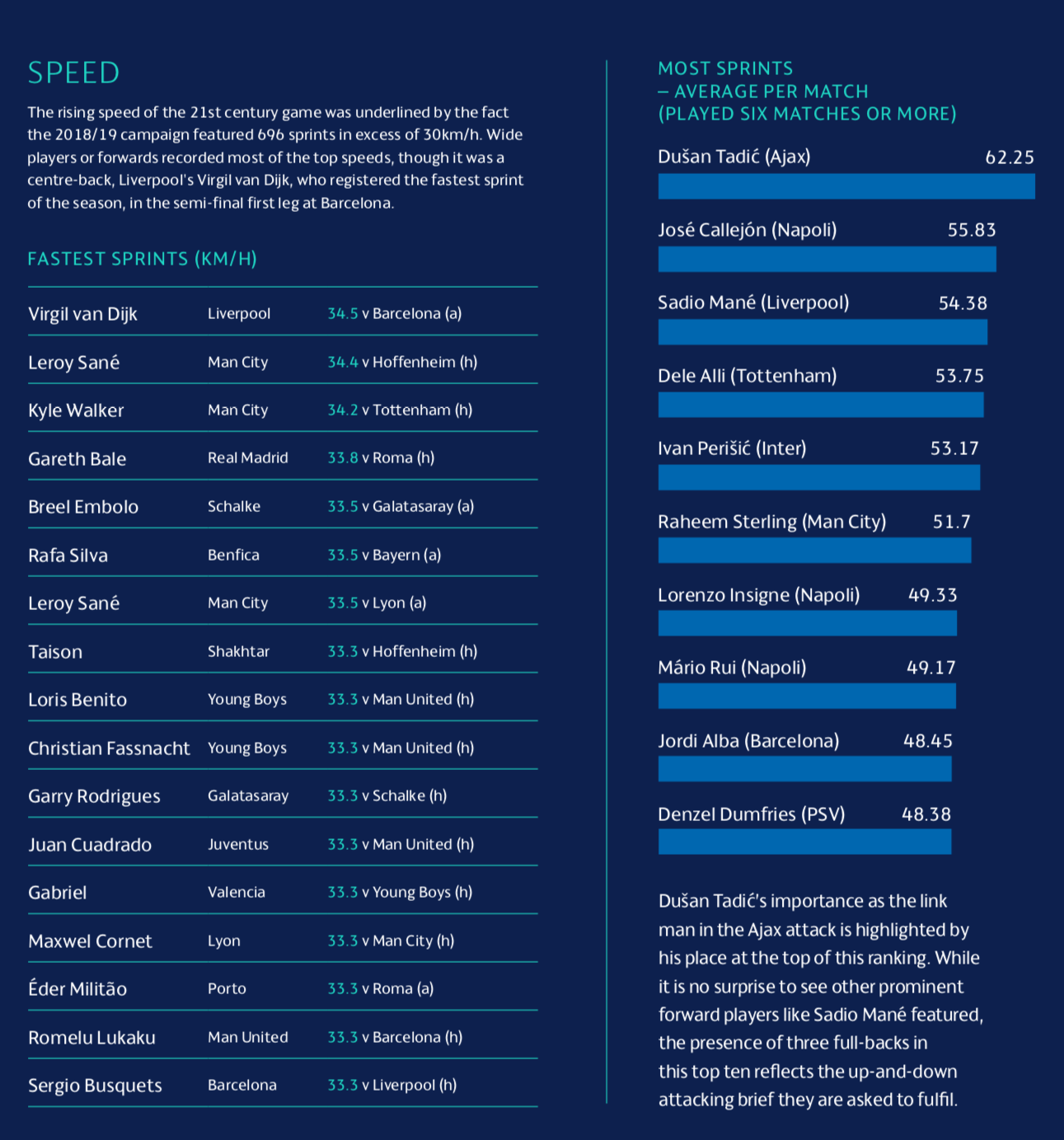 The stats tally with what Norwich Head of Performance Chris Domogalla told TGG earlier this week, that, “the sprint distances and high-intensity runs are more in English football than the rest of Europe.”

Elite football is getting faster and faster every season, with England leading the way. The 2016/17 top speed of 32.6km/hr, set by Benjamin Mendy (then of Monaco), would not have made it into the top 17 fastest speeds published by Uefa this season.

Speaking in June, former Manchester United and England defender Gary Neville told TGG: “These players today run faster, they eat better, they drink less alcohol. They’re all running 13, 14km a match, some of them are running 1500m at high intensity and 20 years ago Gary Neville and his team-mates weren’t doing that.

"You can’t do what these lads are doing without working your absolute bollocks off.”

There were three Premier League players in the top 10 for most sprints per game in 2018/19 (for these purposes a sprint was defined as 25.2km/hr or faster) - Liverpool’s Sadio Mane, who was third with 54.38; Tottenham’s Dele Alli, who was fourth with 53.75; and Manchester City’s Raheem Sterling, who was sixth with 51.7.

Ajax’s Dusan Tadic was clear at the top with an average of 62.25 sprints per match, which smashed the previous season’s best of 58.04 by Napol’s Jose Callejon.

The Uefa report is compiled using tracking data from ChyronHego.