Kitman Labs: Helping Norwich get up to speed in the Premier League

Domogalla arrived at Norwich in July 2017

NORWICH CITY understood the step-change in quality and intensity of the Premier League after just 45 minutes of their opening game of the season.

Coming in at half time against Liverpool at Anfield, the Canaries were already 4-0 down, having succumbed to an onslaught from the European champions.

“Before the game, the players knew the topics they needed to be aware of, but you don’t fully realise until you’ve experienced it,” Chris Domogalla, the Canaries’ imposing Head of Performance, tells TGG.

“You are playing the best team in Europe, probably the best team in the world, along with Manchester City, at their home ground. We needed that game to be prepared for how it will be in the Premier League.”

After being outclassed before the interval, Daniel Farke’s men won the second half 1-0 and Domogalla says: “From a performance point of view, I was really pleased that we learned the lessons and delivered a better second half.

“The players adapted and hopefully we can catch up and find our rhythm at this level now.”

Norwich now have time off during the international break to reflect on lessons learned from their opening four league games - which have yielded one win and three defeats - before a daunting home game against champions Manchester City on September 14th.

GETTING UP TO SPEED

Domogalla, who cuts a striking figure with his blonde hair and colourful tattoos, arrived at Carrow Road with Farke in the summer of 2017, having previously worked with the manager for Borussia Dortmund reserves.

It didn't take long for him to realise the big difference between German and English football: speed.

“The sprint distances and high-intensity runs are more in English football than the rest of Europe,” he explains. “From my experience, that’s because England has more counter-attacks and teams chasing the second ball.

"In Germany, it’s more tactical, so play is shifting over the field rather than teams chasing the ball.”

The Premier League has been another level up again.

“What we had already worked out from the stats was that the number of high-intensity sprints was more in the Premier League than we had been used to during our two seasons in the Championship. This was something we clearly needed to be prepared for.

“As I say, you never really understand it until you’ve experienced it and it was a shock in those first 45 minutes against Liverpool, but we’re adapting.

“Another big difference is the mental side. Because the quality of individual player is so much higher in the Premier League, your awareness and mental fitness needs to be that much higher too.

“You have to concentrate all of the time, or else you can be punished. Building concentration and mental fitness has been something we’ve worked on in our training scenarios.”

Having said all that, Domogalla insists that Norwich’s playing philosophy will not change too much this season. Farke’s men had the most wins in the Championship last season (27) and scored the most goals (93), as well as drawing widespread praise for their expansive style.

“We will try to do the same things, just at a higher quality and intensity,” says Domogalla. “We will focus on our strengths and where we can hurt opponents. “What we don’t want is just to defend, defend, defend. The ultimate goal is to bring our approach and hurt the opponent and take their focus away.

“You need to have brave and smart players who have the courage to take our game plan onto the pitch and try to adapt to the situation.”

As a practitioner, Domogalla says he is continually seeking a balance between “pushing players to the next level” and “trying not to hurt them”. This is why Norwich’s long-standing partnership with Irish sports science and analytics firm Kitman Labs has been vitally important.

Kitman Labs was founded in 2012 by former Leinster conditioning coach Stephen Smith and uses a combination of machine learning and analysis to evaluate injury risk and uncover the drivers of performance on the pitch.

The company has more than 200 clients, including Saracens, the University of Alabama, LA Galaxy, the UFC and three other teams in the Premier League.

Norwich were one of the early adopters of the software and Domogalla maintained the relationship when he arrived at Carrow Road.

“I thought it was a good match because of how they wanted to develop and the values they have,” he explains. “They have been good partners for us.”

Using the vast amount of data that the club collects, from both training and matches, the Kitman Labs software is able to provide actionable insights and real-time risk alerts.

“All our sports science, medical and technical data flows into the software, and we get red flags if there is an injury risk for an individual player,” he says. “You need to decide what data is important in your set-up, what data can you control. Kitman are essentially doing that.

“They collate physical, medical and game data in one dashboard or multiple dashboards so we have easy access to outputs and flagging systems we can work with. You have an objective filter and know what interventions to take to avoid worse-case scenarios or top players up so they are ready for the next match.” 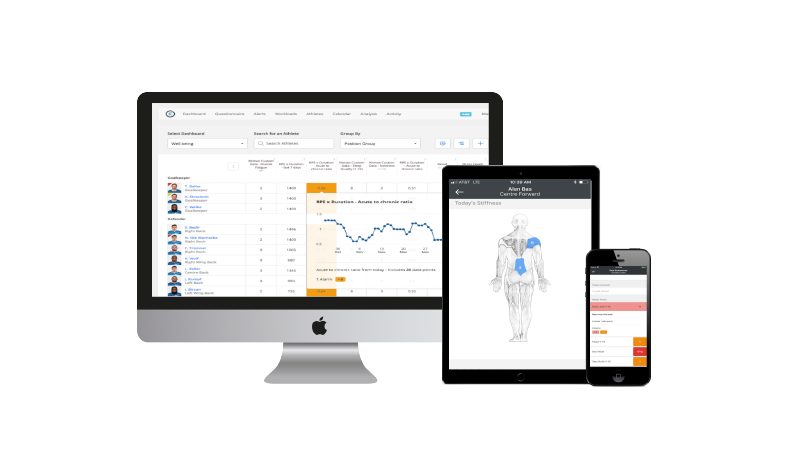 The product started out as an electronic medical record tool, but has evolved to performance and health analytics solution which can be individualised for each client, with artificial intelligence enabling it to learn and evolve.

"They are also running analysis, trying to understand club and department goals and visions and bring that in line with the data you are collecting.

“They will discuss your models and parameters based on what historically has been collected in your environment and what is the driving part in being successful.”

Smith was compelled to set up Kitman Labs because of three main problems he faced as a practitioner - “a sea of data, limited time and the fact that injury is complex and multi-factorial” - and Domogalla says he has appreciated the fact this is a company that understands top-level sport.

“They have listened to our feedback and requests for how the product can work in our environment,” the German says. “There are still topics they’re working on, because of all the developments football is taking. It helped us a lot in making a bigger picture for us.”

It’s no exaggeration to say that there was a revolution at Carrow Road when Stuart Webber arrived as Sporting Director in April 2017.

Every head of department bar analysis chief Lee Dunn was replaced, as well as several big-name players. For the players who remained, there was a major revamp of their working week.

“We went from two days a week off guaranteed, to one day off, not guaranteed,” Domogalla reveals. “This was quite a change for the players who stayed with us. A lot of them were used to Thursday, Sunday off. We wanted them to work on those days and have Monday off.

“It needed a lot of education, to explain why we were doing these things. It wasn’t to annoy them or take comfort away, but because it is essential to work on these days in our set-up.”

Surely there must have been some resentment at having to come in on a Sunday? Not at all, the German insists.

"It wasn’t just tolerated, it was embraced.

"The players wanted to get better and bought into it. From a research point of view, there isn’t a right or wrong. But, for us, it is essential to have control on matchday plus one for the recovery processes.

“It is also important to have a psychological cut after that day, which is when we have our post-game analysis about the game. Now, when the players do have their day off, they can tick off the game and crack on with the next one. A lot of the US teams are doing the same.”

Domogalla thinks German fitness coaching is more “field based” than it tends to be in England, with more “coaching cues and drills”, but he doesn’t ascribe to the pure tactical periodisation model in which all physical work is done within a tactical framework using the ball.

This model became fashionable with managers like Jose Mourinho.

In this regard, Domogalla is on the same page as Tony Strudwick, who has told this website “my biggest criticism of tactical periodisation is that we don’t overload the athlete on the physical component”, and Darcy Norman, formerly Head of Performance for AS Roma and now Director of Performance Science for Kitman Labs, who said “I love tactical periodisation, but it doesn’t eliminate the weights room”.

“The Dutch coaches are strong in their approach of doing everything in football specific drills,” Domogalla says, “but I would rather put myself in that corner of Darcy Norman and Tony Strudwick, where the football-specific side of this is uncontrolled, so you need the controlled top-up at some point to really get the overload into a player to reach the next step.

“The whole purpose is to make the player more efficient, so the muscle can create a greater force with the same energy in the same manner.”

The German finishes by saying: “You want to ensure you don’t have a clinical environment and put all the external factors into place, such as mindset.

“I wouldn’t say there is one golden way, because it would be quite a boring job and everyone would be doing exactly the same. There is a grey zone, where you need to figure out with your population, in your philosophy, what is the right thing to do.”