Marcelo Bielsa: Tactics and philosophy of a cult manager

Leeds hope Bielsa is the man to revive their glory days

JED DAVIES spent three and a half years researching the philosophy and ideas of Marcelo Bielsa for his book The Philosophy of Football.

Davies, who runs the Futuro Soccer Academy in Ottawa, has been fascinated by the Argentine coach for many years. He shared his findings about the new Leeds United manager with TGG.


Marcelo Bielsa is a cult figure who attracts not just admirers, but disciples.

The 62-year-old manager hails from Rosario, Argentina - the same home city as Lionel Messi, Cesar Luis Menotti, Che Guevara and Jorge Sampaoli - and has left long-term legacies in his homeland, the corridor country of Chile and much further afield too.

As a mark of gratitude for his achievements, Newell's Old Boys - whom Bielsa led to two Argentine titles and (remarkably) the final of the Copa Libertadores in 1992 - renamed their stadium the ‘Estadio Marcelo Bielsa’ in December 2009.

When you consider the fact that this renowned coach is yet to win much in his long career - other than those titles at Newell's and the 2004 Olympic title with Argentina - this fervour may seem strange. But Guardiola, who sought Bielsa’s counsel before taking the Barcelona job in 2008, dismissed this theory last year.

"But that is much less influential than how he has influenced football and his football players. That is why, for me, he is the best coach in the world.”

If I were to use three words to describe Bielsa, who is often referred to as El Loco (The Madman), they would be bold, daring and revolutionary.

While working in his native country, the Newell's coach used to hire local youth footballers to climb the fences or trees adjoining rival training grounds to spy on the opposition and report back on their potential starting XIs ahead of matches.

In 2014, Marseille fans photographed him sitting in his club tracksuit in a local McDonald’s poring over videos on a laptop following a win over Toulouse. As usual, the Argentine was completely consumed by his work and seemed unaware of the commotion going on around him. He also famously quit as manager of Lazio in July 2016 without even taking a game, due to what he perceived as broken promises by the club’s board.

Lazio's directors had assured their new boss that his shortlist of transfer targets was being chased up, only for El Loco to carry out his own research and discover that the players and agents had not been contacted after all. There are too many other examples of Bielsa's intense, fanatical personality to list here. Instead, this piece will explore some of his key tactical beliefs.

“I always tell my guys that our playing style is about movement” - Marcelo Bielsa.

Former England Under-16 coach Dan Micciche remembers watching Bielsa’s Athletic Bilbao beat Manchester United 3-2 at Old Trafford in 2012 to knock them out of the Europa League. Micciche was in turn intrigued and enthralled.

“It was the first time I'd ever watched a team and been unable to tell who was playing in which position,” he told me.

This will be one of the early challenges for Leeds’ players, as they are unlikely to have encountered anything like this before. Players in Bielsa’s teams rotate and move freely, defying the use of conventional positions.

Fans who attended Bilbao’s 3-3 draw against Pochettino’s Espanyol on September 16th 2012 witnessed Inigo Perez (a natural central midfielder) defending in the left full-back slot in his own half when the team were out of possession. However, when Bilbao had the ball, Perez played as a central holding midfielder behind the more attack-minded Oscar de Marcos.

At Marseilles, Dimitri Payet, who had always been a traditional wide midfielder, played as a ‘central winger’, starting in the middle and drifting wide and linking play with the wingers and wing-backs. André-Pierre Gignac played as a wide centre forward and drifted into wide positions to link and build play down the flanks.

Gignac later said of Bielsa: “He taught us a vibrant, real type of football. He knows even the smallest detail.”

Bielsa has said “movement, rotation, concentration and improvisation” are the four cornerstones of his footballing philosophy. And if he has one core philosophy, it is movement - in order to create opportunities for penetration.

Guardiola has used full-backs in the ‘half spaces’ to devastating effect during his time at Bayern Munich and Manchester City - as TGG explored in this piece. This move was borrowed from the pages of Bielsa’s tactical playbook.

There are two key purposes for Bielsa's rotations: 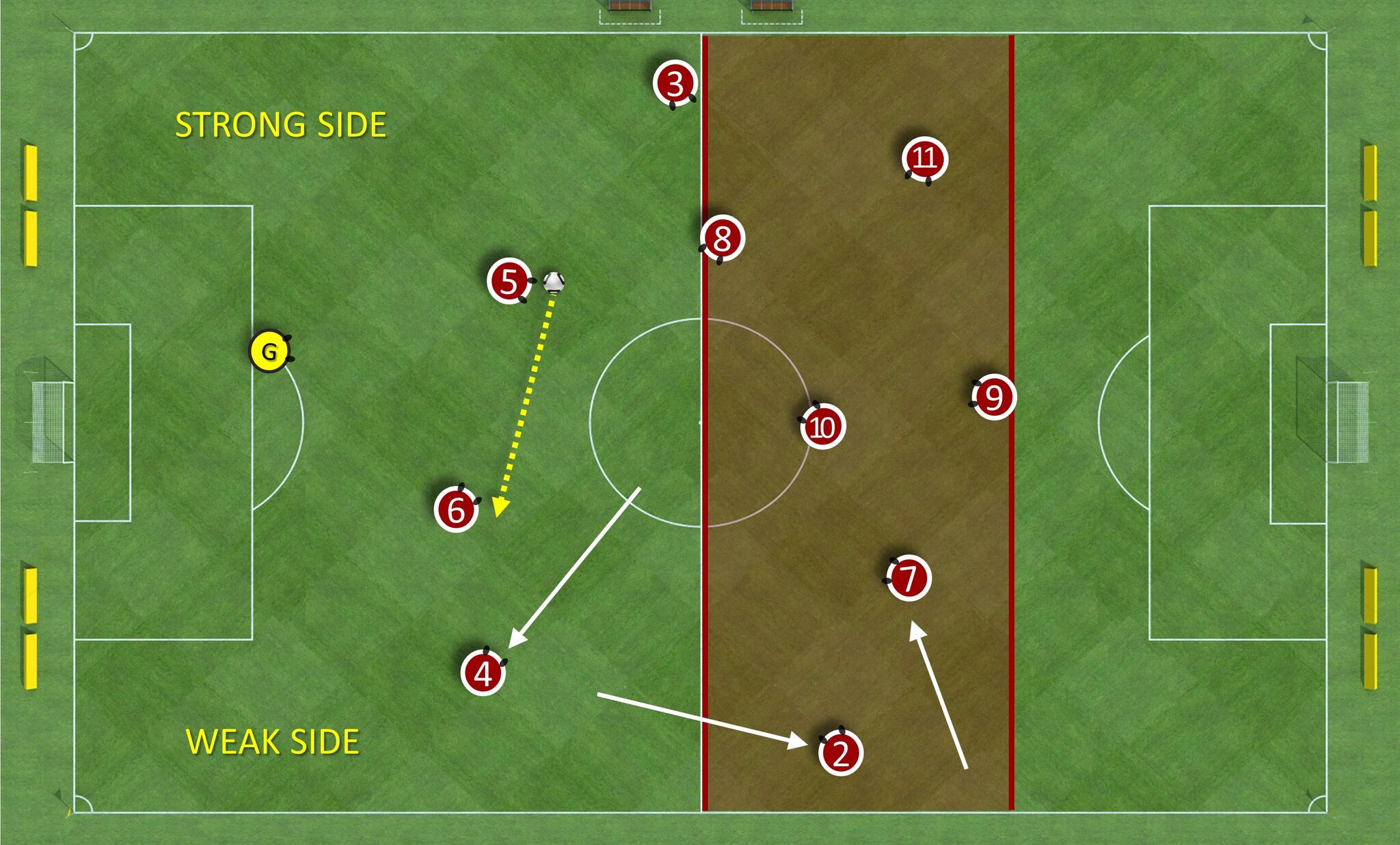 How a holding midfielder pulling out to the side of central defenders adds a player between lines. The ball moves from LCB to RCB. The CDM then pulls out to dictate a forward pass. The LB/ LW rotate to get into position to take advantage of this situation. This rotation adds to the numbers ahead of the ball between the lines and gets a playmaker on the ball to find the key pass.

In order to achieve the playing style and philosophy outlined above, Bielsa started doing something simple, yet counter-intuitive: using midfielders in the defensive line.

For Chile, Gary Medel, who had played as a midfielder throughout his career and gained the nickname ‘Pitbull’, moved back into the centre of defence.

Celtic assistant Chris Davies explained: “A player like Gary Medel sees the 2 v 1 when playing out from the back in a way that the more natural central defenders don’t. That for me is why Bielsa saw value in playing him deeper in the build-up play as a central defender instead of in his more natural position of centre midfield.”

This move was key as Chile became one of the teams of the tournament at the 2014 World Cup, beating defending champions Spain in the group stages, before being eliminated by Brazil on penalties in the last 16.

Former Leeds assistant Pep Clotet, another 'Bielsista', said: “Marcelo Bielsa tended to play the attacking players in deeper positions because a player with attacking mentality gives you consistency in the attack and improves the output of the ball.”

Perhaps the finest example of all is Javi Martinez, who had played as a goalscoring midfielder before Bielsa took over at Bilbao. The Argentine turned him into a magnificent central defender who inspired the Spanish side to the final of the Copa del Rey and Europa League in 2009. In fact he was so good that Bayern Munich paid his €40m buy-out clause in 2012.

This principle of moving ball players back helped Bielsa to achieve his objective of verticality (forward passes to break the lines) and high-octane pressing football, which we could in fact dedicate entire sections to.

Bielsa once said: “If football was played by robots, I’d win everything.” This is misleading though, because he also allows players the freedom to express themselves.


Yes, he breaks down the technical and tactical components and theorises them (“there are 36 forms of communicating through a pass"); but within that there is flexibility.

"Totally mechanised teams are useless, because they get lost when they lose their script,” he has said.

“I also don’t like ones that only rely on the inspiration of their soloists, because when God doesn’t turn them on, they are left totally at the mercy of their opponents.”

So there's a balance. At each team the Argentine has coached, the artistic soul of the team is felt within the context of insane hard work and courage.

For example, Payet was given the artistic freedom to find his place within the structured 4-2-3-1 and 3-3-1-3 organisations at Marseille. The forward, who had been an also-ran before, suddenly forced his way into the French national team.

It is also worth noting the number of Bielsa’s former players who have made their own move into management: Pochettino, Eduardo Berizzo, Dario Franco and Juan Manuel Llop played under him at Newell’s Old Boys alone. This suggests that Bielsa sparks a lifelong curiosity about football in his players.

5. AFFINITY WITH THE FANS

If you take the long-riddled road from Buenos Aires to Rosario (four hours by bus), then you will see the football landscape change. For 'Rosarinos', football takes on an ideological, philosophical and romantic form that you won't see in the capital; one in which players are seen as interpreters of the fans’ fear, joy and sorrow.

Did Bielsa create or continue this philosophy? That's a moot point and the answer is probably somewhere in between. However, this is something he has taken with him throughout his managerial career.

In 2012, Athletic Club Bilbao lost two cup finals, just sixteen days apart: a 3-0 loss in the Europa League to Atlético Madrid followed by a 3-0 loss to Barcelona in the Copa del Rey.

After that second crushing defeat, Bielsa overheard a conversation between his players. Their laughter shocked him.

The following day, he spoke mournfully to his team, highlighting the disconnect between modern-day players and the fans they represent.

“We couldn't match the expectation we created,” he said. “It's a scar, a wound. I heard conversations, people laughing yesterday.

“I think it's unforgivable, lads, to get people's hopes up and let them down, not being able to match the expectations you create. Because I'm truly ashamed to have let down the Athletic Bilbao fans.

“Don't lose sight of that fact, lads: we let them down. You can’t let people down, especially loyal people, so loyal that you can be losing 3-0 with an open wound and give them the smallest thing to cheer about and they applaud you in the 80th minute.

"You are the same type of people we’re talking about. Extraordinary people. But regrettably lads, we weren’t up to the task.”

During his time at Marseille, The Stade Velodrome was often decorated with banners, flags and tifos (murals) directed towards Bielsa, highlighting the way in which The Madman had captured their imagination.

I wouldn’t like to make any predictions about Bielsa’s tenure at Leeds United. It may be brief, as it was at Lille and especially at Lazio.

But I will say one thing, with some confidence: Bielsa will attempt to create a vision for the club’s future. And, who knows, he may take Leeds United to places they wouldn’t have otherwise reached.

Jed Davies's book The Philosophy of Football: In Shadows of Marcelo Bielsa is published by RocketBird