Pep Guardiola and the half spaces

I’VE just come off the A Licence coaching course with the Welsh FA. We did a two-day contact about the half space - Guardiola has it locked down. (Steve Sidwell)

FOOTBALL’S fertile ground used to be zone 14, that golden square in front of the penalty area.

Now, for Manchester City and Pep Guardiola, it’s the ‘half space’, the channel between full back and centre half on either side of the area. In fact chunks of coaching courses are now devoted to it.

“Ninety percent cent of Manchester City’s goals come from this area,” Brighton midfielder Steve Sidwell said after attending a two-day session with the Football Association of Wales as part of his A Licence course a fortnight ago.

“When they build up play on the left, (Oleksandr) Zinchenko comes into central midfield and (Leroy) Sane stays way out wide and pins the full-back there.

“It causes dilemmas, it causes an overload in midfield. They did it unbelievably at Stamford Bridge (when City won 1-0 on 30th September) and tactically Chelsea did not know what to do.”

Here's why the half spaces have become so important to Guardiola during his managerial career:

Getting the ball to your most creative players in spaces where they can hurt the opposition is hardly a new idea.

For example, when they won the 1998 World Cup and Euro 2000, 81.3% of France’s assists came from zone 14. Teams became wise to this tactic though, deploying holding midfielders in the danger zone to nullify the threat of playmakers.

At Barcelona, Guardiola utilised the full width of the pitch and devised methods to pull opposing players away from the central zone in order to gain a numerical advantage.

“If you stand between the right-back and the right centre-back and Sam [Eto'o] or me does the same on the other side, suddenly you hold four players alone,” he said.

"Just from you being high and wide, and then coming back in, you are actually freezing four players because we are threatening to go in behind. With Eto'o and me running in behind, and Xavi and (Andres) Iniesta on the ball, with (Lionel) Messi dropping, either you die, or you die.”

As Henry said, central midfielders Xavi and Iniesta tended to be the ones delivering devastating passes from the half spaces at Barca - but the strategy evolved at Guardiola's next club.

At Bayern, Guardiola still focused on the half space (or halbraum), but he began to use it differently, deploying the full-backs there when the team attacked.

“This was something we had never seen before,” said Dave Adams, the former Middlesbrough first-team coach and Swansea head of coaching, who helped design the FAW A Licence course.

“You have to be extremely brave to do it and have the right personnel. But if you get it right, it’s so effective. Football is about creating dilemmas for opposing teams and this tactic creates so many.

"What does the opposition winger do when the opposing full-back surges inside on the switch of play? Does he go with him, leaving his own full back exposed and also meaning he won’t be effective on the transition?

“Or does he leave him, meaning there is a numerical superiority in the centre? Does the full back come? Then that will leave the winger free. 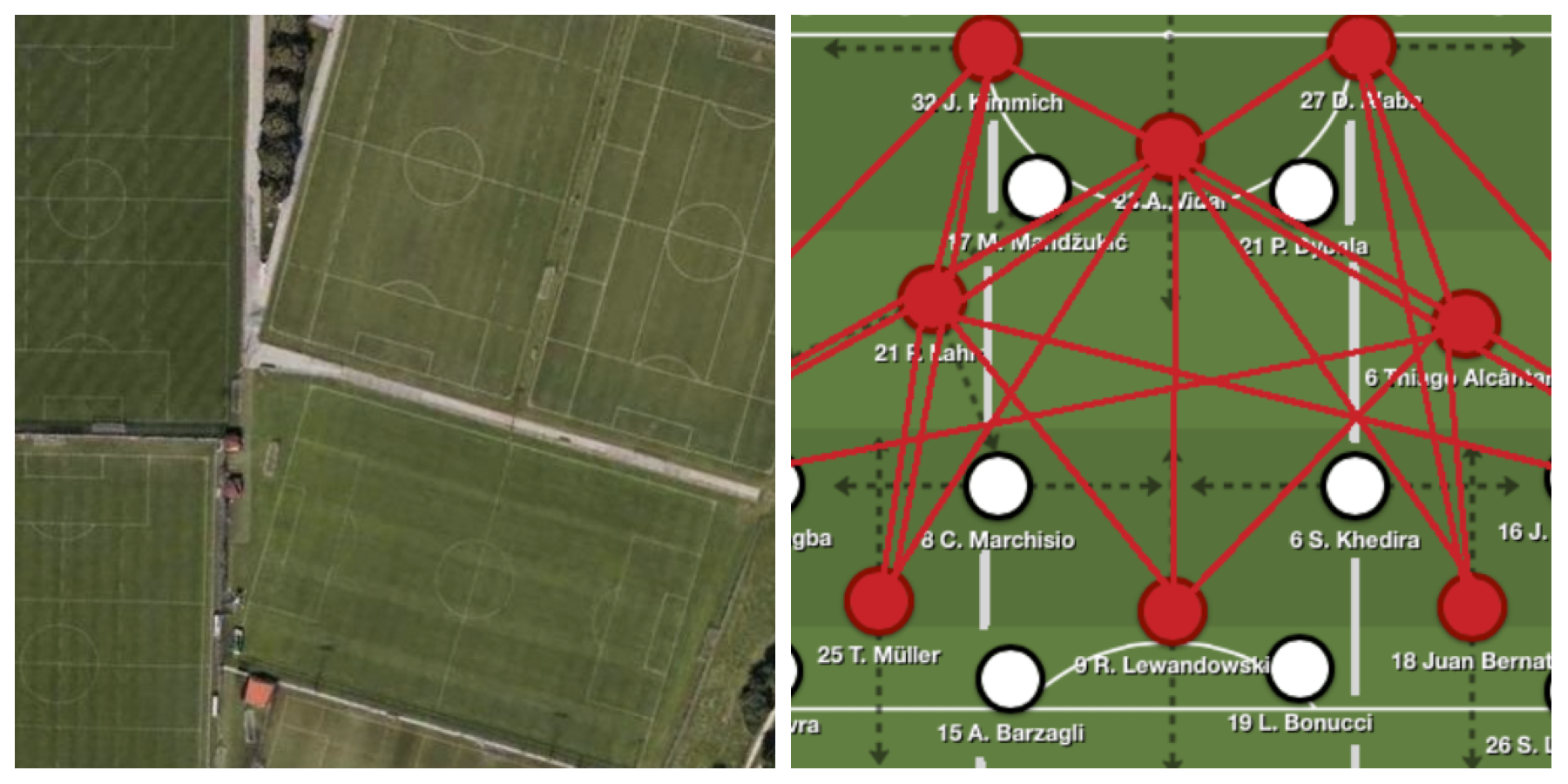 “The centre back can come, but that leaves the number nine free. There are so many dilemmas. Added to this, the number 10 would often run the deep midfielder away as well. All in all, it created a huge space inside.”

Here's a very good piece by Victor Lefaucheux explaining how the tactic was employed to great effect against Juventus in the first leg of their Champions League last 16 game in 2016, which ended 2-2.

As you can see from the graphic (above, right) Joshua Kimmich and David Alaba frequently moved inside to the half spaces, with Arjen Robben and Douglas Costa hugging the touchlines, pulling Juve's wingbacks with them.

At Bayern’s training ground, the pitches were cut to highlight the half spaces (above, left). Other teams in England followed suit. “We did the same at Boro and Swansea,” Adams admitted. “It’s very useful for possession drills and defending games.”

This was something that stuck with Sidwell after the A Licence course. “There are certain teams that cut their pitch so that players know that in a certain shade they are in this half space, this danger zone, where they can cause problems."

At the end of December, Jose Mourinho lamented: “Manchester City buy the full-backs for the price of the strikers.”

After a disappointing first season in England, Guardiola had indeed spent big on full backs, bringing in Kyle Walker for an initial £45m, Benjamin Mendy for £52m and Danilo for £26.5m.

Mourinho's comment seemed to miss the point though: full backs are crucial to Guardiola's style of play and have to be intelligent, technically adept and athletic in order to do what he needs them to - in both attack and defence.

“Only certain full backs are comfortable operating in that half space," Adams added. “The instructions to them at City are unbelievably detailed and tight. You have to give a lot of credit to anyone who can play like that.”

The tactic of moving the full-backs into the half spaces can leave City vulnerable on the counter - as Liverpool showed in their 4-3 win in January and Newcastle did in their 3-1 defeat a week later, when three passes picked out Jacob Murphy in the vacant left-back area for the visitors' consolation.

City's full backs have to be extremely athletic to get back into position if the ball is lost.

“Like all Guardiola's teams, City use the instant press and the full backs are so athletic that they can can get back into slot within two or three seconds," Adams said.

These tactics might sound straightforward, but, as Sidwell argued: "You need players who can play in those positions and follow those philosophies."

Guardiola is very prescriptive about how his players get into the final third - but once they're there, it's down to their own talent and instinct.

"Guardiola came to speak to us on the Pro Licence course that (Manchester City assistant) Mikel Arteta was doing," Adams revealed. "His big thing was how to get the ball into the final third in the best way possible. The best areas are the ones in which they can create most opportunities. Everything was prescribed, with clear rules and instructions.

"But once they are in the final third, he will leave it down to the individuals to decide what to do."

That's when individual brilliance takes over, with slotted passes to break the lines, wall passes, tricks, feints, surges of pace and so on used to breach a defence.

In an excellent recent interview with France's SFR Sport (above), Guardiola suggested that using the full backs in the half spaces had never even been part of any grand design. Rather, he had found the best way to utilise the players at his disposal.

The interviewer asked why 35% of Barcelona’s attacks had come through the middle, while only about 25% of City’s do.

“When you have Xavi, Iniesta, (Sergio) Busquets, Messi, (Cesc) Fabregas, it is normal you play in that position in the middle. When you have players here like Sane, (Raheem) Sterling and (Kevin) De Bruyne, we attack more the spaces. In football there are fundamentals, but you adapt to the players you have.”