HAVING worked his way up from Under-7s to first team boss at West Brom over the course of 13 years, the last few months have proved tough for Jimmy Shan.

“Every time I go and watch a game I get jealous I’m not involved with a team,” the 40-year-old tells TGG. “I’d been in football full-time for a total of 18 years. Pre-season was a strange one, not being involved and not having to plan sessions or a pre-season.”

His last game was the second leg of the play-off semi-final against Aston Villa in May, with the Baggies losing the tie on penalties.

On such fine margins are managerial careers made.

“I went to the training ground the next day to tidy my stuff up,” Shan remembers. “I saw the Technical Director (Luke Dowling) and was thanked for the job I’d done and told I’d be kept abreast of developments.”

A month later, he was gone, replaced by Slaven Bilic. That was the end of an association that had begun in 2006, when Dan Ashworth brought him to West Brom as Under-7s coach.

Shan is sanguine, saying he knew the deal when he moved up to the first team under Darren Moore last June.

“An Academy job is probably as secure as it gets in football,” he says, “but when you work at first-team level you have to be mentally and emotionally strong, because you are two or three games from the sack.

“One of two things will happen - you’ll end up without a job, or you’ll be headhunted because you’ve done so well.”

When he succeeded Moore as manager the following March, it was “horrible, there’s no other way to describe it” because he was taking over from a friend with whom he had worked at both Academy and first-team level.

“Being the gentleman that he is, Darren immediately wished me the best and said ‘enjoy it and embrace the challenge’. On the morning of a game, he’d be the first one to message me, wishing me luck, and the same after a match as well.

“I’ve known Darren for eight years and we not only have a good working relationship, but a good personal relationship too. He was very supportive in difficult circumstances and that speaks volumes.”

Shan was initially given the job on a game-by-game basis and thought he was a goner just a few weeks into his reign, when the Baggies played Preston at the Hawthorns. In the run-up, there were reports that North End manager Alex Neill had agreed to take the job.

West Brom won 4-1 and “next day there was breaking news on Sky Sports News - 'Alex Neill has signed a new deal at Preston'," Shan remembers.

“A few days later, the Technical Director and Chief Executive sat me down and outlined that they didn’t want to make any changes and wanted me to stay in charge going into the play-off games.”

All in all, Shan won seven of his 12 games in charge, drawing one and losing four. For a good few weeks he couldn’t bring himself to watch the play-off games back, because it hurt. But when he did, he analysed them in forensic detail.

For the first leg, which Villa won 2-1, Shan felt his side were “tactically spot on”, but in the return, “if I had my time again, I’d go from a back five to a four and press higher up the pitch from the off”.

“We’d looked at going from a mid block to being front foot on the press in the second leg, but didn’t really get that going until the second half," he explains. "We should have got that high press going sooner, because we had some players with offensive qualities who could really cause them problems.

"We felt comfortable having that block 10 to 15 yards higher up the pitch, which would see us regain possession in their half instead of ours."

Shan still seems to be held in high regard by the Baggies fans he meets when he's out in Birmingham.

“If I go out for a drink or for a meal, I’ll usually speak to half a dozen Albion fans. They’re always thankful for the work I did. I think they appreciate the length of time I was at the club and the fact I worked with all the age groups.

“They talk about those play-off games and the atmosphere, which was special. We have a nice connection. I had a fantastic time at the club and never thought I’d get the chance to step into the dug-out and be head coach.

“I have three boys, aged eight, six and seven months, and the first kit they’ve all had was West Brom. I’ve got massive memories there and the club will always be in my heart.”

RISING THROUGH THE RANKS

Shan played at Walsall’s Academy until he was 16, but suffered a serious ankle injury before they handed out the YTS contracts. That effectively ended his professional playing career before it had started, and he turned to coaching at the age of 21.

His began as a community coach at Birmingham City, rising through the ranks to become a full-time coach and eventually assistant Academy Manager.

“I’m a firm believer that you have to put in the hard yards to become a good coach,” he says. “I worked weekends, evenings, all to prove that I understood the game and how to develop players and teams.”

When Terry Westley took over as Academy Manager at the Blues, he demoted Shan, which turned out to be a seminal moment in his career.

“Dan Ashworth heard about my situation and invited me over to West Brom for a chat,” Shan remembers.

"His vision for the Academy, his enthusiasm, his knowledge, his understanding of the game, were way beyond anything I’d heard before.

"I really wanted to work for him. Dan is an excellent coach himself, and implemented a DNA and culture at West Brom. He went on to do the same thing for England and I think in three, four years, people will really begin to appreciate and understand what he's done.”

With Ashworth as Academy Manager and then Technical Director, Shan started off as performance coach for the U7s to 16s, before doing four-year blocks with the the 12 to 16s, the U18s and then the U23s.

His journey ultimately led to the first team and that experience of working all the way through the age groups is perhaps unique. The Midlander finished by giving TGG some coaching tips he picked up along the way:

Jimmy Shan: I think coaches have to be very careful of not wanting to jump up through the age groups. Many do it for finances. In my opinion, the level of finance is apportioned wrongly in English football. The U7s coach will earn x, the 16s will earn more, the 18s more and so on.

People want to make that step for financial benefit rather than benefitting what their strengths are. I worked with coaches at West Brom who had always been with the younger age groups and I had a lot of admiration for them.

They were very comfortable working with those age bands, knew where their personal strengths lay and had no aspirations to jump up just for financial reward. They became real specialists in those age bands, which is what you want.

I think it’s very important that coaches understand the area where they want to specialise and then become experts. I see some fantastic young coaches who want to jump the ladder simply because of finance and it doesn’t suit their coaching expertise.

People might say, ‘well you did it.’ But I always knew I wanted to work with the older age groups and ideally at first team level - and I never jumped quickly, I had pretty much four years in each development phase.

2. Get your points across quickly and clearly

As a younger coach you can be too concerned with impressing the people watching and you can talk too much.

I've done it myself. You're in the dome and think, ‘I want to show Dan Ashworth how much I know.’ That’s the coach’s ego. Only when you become comfortable in understanding what your personal delivery, style and DNA is, do you master it.

That was a big thing I learnt from Dan. He had an unbelievable way of making a coaching point very simply, within 10 seconds, very crisp, simple and detailed information. 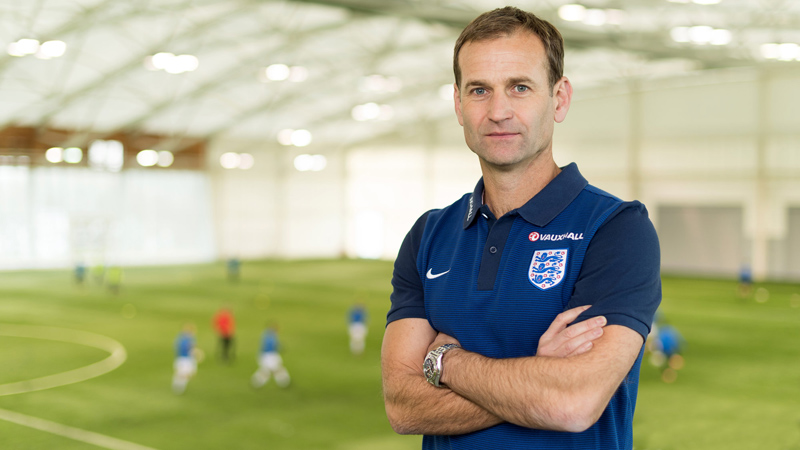 As I’ve progressed as a coach I’ve really grasped that too, to be in and out as quick as you can. When you’re working with the older age groups, because of periodisation, I think it’s quite easy.

Within a six-minute block, you might have a minute to get my point across. At the younger age groups you have longer, but as a coach you’re a teacher and need to have clear detail. Knowing when to intervene and how to get your point across quickly and clearly.

In the foundation phase, a high proportion of your coaching should be about technique, with very subtle ways of developing tactical awareness and understanding. As the player progresses through the age groups, shape, game management and the importance of 11 v 11 will begin to outweigh the technical aspect. It's a sliding scale.

The language used with players and the coaching style will change according to the age group. In the first team, if I had a block of 12 minutes, I would work for three and make sure it was as intense as possible. Then we would have a minute of rest and recovery and I'd get my points across in that slot.

At the developmental ages, in a 25-minute window, you would know that when you step in you can take more time and give more detail. It’s about education at those ages, whereas at first team level you want to be more intense and more snappy with your information.

If you look at the modern game, a lot of it is about dealing with the high press or low block. That means there are a lot of 1 v 1s in close tight spaces. At younger age groups you should try and replicate that as often as you can.

I like small-sided games, that will help to develop and progress 1 v 1 skills.

Unopposed technique, I like it. Even at first-team level, we would have six to eight minutes of unopposed technique in a training session. It gets people’s mind and eye ready for the practice. As long as the unopposed practice is real and relevant to the game, it works well. Players need to use their imagination to take a picture.

Look at boxing - it’s a contact sport, but how long would a boxer spend on the pads? That’s technical refinement and I think unopposed technique is a huge thing for the game, although I would never, at any age group, do any more than 20% of a session like that.