How Arsenal use heart rate monitoring

MODERN football's focus on GPS has led many clubs to lose sight of another important part of the monitoring picture: heart rate variability.

In fairness, systems for measuring and analysing heart rate didn't used to be too user-friendly. Now practitioners can get in-depth data in real time, presented in a meaningful and easily understandable way.

Burton is now lead physical performance coach for Gamechanger Performance, who run the PFA’s rehabilitation programme at St George’s Park. He uses the Firstbeat platform and monitors to test heart rate and says the system is a “no-brainer for rehab”.

“GPS will typically only feed back how long a player has been in a heart rate zone," Burton explains, "Firstbeat can do a lot more than that.”

Australian Stuart Graham, Head of Sports Science at Port Adelaide Football Club, agrees that “external load only provides half the picture when you're monitoring training adaptation for individual players”.

“We specifically look for periods when the relationship between external and internal load becomes uncoupled. This informs us that we may need to adjust our training load periodisation or that certain players are not in an optimal state of readiness.”

READ MORE: Putting GPS in the hands of the players

The man who introduced heart rate monitoring to Port Adelaide was Darren Burgess (above), who continued to use the technology at Arsenal after he arrived at the North London club last summer.

“At Arsenal, every session is monitored using STATSports GPS technology, Firstbeat heart rate monitors and elevated cameras or drones,” the Gunners Director of High Performance explains. “All sessions are evaluated for external and internal load as well as the tactical success of each drill.”

Arsenal’s lead sport scientist Tom Allen adds: “Practitioners can have all the information in the world but the data itself won’t affect the outcome. That is why it is paramount we’re able to find the signals within the noise and it is people like Firstbeat who can help us do this.”

The Finnish company have six clients in the Premier League - Arsenal, Manchester United, Manchester City, Fulham, Spurs and Wolves - but more than 1,000 elite teams are now on their roster worldwide.

Norwich City are their newest elite football customer in England, with Canaries Head of Performance Chris Domogalla saying: “Firstbeat’s HRV data allows us to add another objective piece to the puzzle of optimised player management alongside GPS, strength and movement scores and subjective wellness questionnaires.”

Burton (below) says HRV is important because all teams are striving for individualisation in their training and recovery regimes. 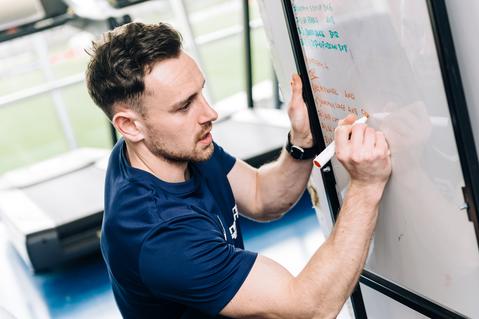 "Before sports science, it was one-size fits all and every player was doing the same thing.

"In the modern day you aim for individuality. Technology allows practitioners to understand what every player does.”

Firstbeat's system consists of a chest strap worn by the player which then sends data to a receiver. This transfers the data to a laptop in the form of meaningful analysis. Burton usually links his laptop up to a big TV screen, which enables players to monitor their performance as they train.

The monitors are mainly worn during indoor work at St George's – when players are on the bike, rower or cross trainer – and often in a hypoxic and heat chamber, where Burton needs to be mindful of their elevated heart rates.

Whereas GPS is able to capture ‘”face value” heart rate, based on beats per minute, Firstbeat measures from beat to beat, turning data into in-depth metrics.

“We’re fairly unique in that we use every beat to beat and have everything in one platform,” says Graham Stark, a former Norwich City and Aston Villa sports scientist who is now key account manager for Firstbeat.

Burton says he looks for a number of key metrics. The first are individualised heart rate zones based on percentages of max heart rate, which are categorised into red, yellow and blue/ green zones. The red zone, which you’ll often hear coaches and managers talk about, is high intensity, at above 85% of capacity.

“If someone’s at the late stage of rehab we’ll push it up to 100% for brief intense periods,” Burton explains.

He’s also a big fan of a feature called training effect, which basically measures how hard a session is, in terms of aerobic and anaerobic efforts, based on heart rate dynamics from high intensity intervals and excess post oxygen consumption (EPOC).

You can opt for a level of training effect from one to five and Burton explains: “Three to five will have a positive effect on aerobic and anaerobic heart rate, two will maintain those levels, and one is focused on recovery training.

"We have our hard days on Tuesdays and Thursdays and will generally want our training effect to hit four or five on those days.

Adaptation is basically someone getting better at doing something. If you do this longitudinally (over time) then you get training adaptations.”

Another visual that Burton frequently uses is the split between aerobic and anaerobic training effect during a session.

“Once you’re close to returning to training, you want to increase the intensity by increasing that anaerobic percentage. You also want to individualise training, so this aerobic-anaerobic split will differ depending on what position you are and what kind of player.

“For example, a striker might have a 60/40 split, whereas for a central midfielder it’s maybe a 70/30 between Aerobic and Anaerobic energy contribution. Your sessions should mimic what they’re going to be doing on the pitch.”

With this ability to individualise training and find out the effect that external loads are having “under the bonnet”, we can expect more teams to start switching on to the benefits of heart rate monitoring.