KEEPING a squad of 25 elite players fit and healthy is hard enough in the course of a normal season, but trying to do it during an open-ended period of shutdown is on a different level.

The coronavirus crisis, which has led to the season being postponed in England until April 30th at the earliest, has opened up an unprecedented set of challenges for performance coaches.

Instead of watching how players move in the gym and on the training pitch, club staff are now spending the day refreshing Strava dashboards; in place of eye-to-eye conversations come online questionnaires, WhatsApp messages and group video check-ins.

To find out more, I spoke to (pictured below, from left to right): Patrick Orme, Head of Fitness and Conditioning at Bristol City; Scott Guyett, Head of Sports Science at Crystal Palace; and Callum Lester, Professional Development Phase Coach at Grimsby Town.

All three clubs closed their training grounds soon after the season was first postponed, on Friday March 13th, meaning players had to follow individual training plans from home.

The level of facilities that players in the Premier League, Championship and League Two are able to access from home varies significantly, of course, as does provision between first teams and, in Lester's case, Academy players. However, the three practitioners have faced many of the same challenges.

“We’re dealing with Premier League footballers and a lot of them do have their own gyms, including treadmills,” admits Guyett.

Most of the Palace players still borrowed equipment from the training ground, however. “They were given set times to come in and we loaned out a variety of equipment - resistance bands, barbells, dumbbells, medicine balls, boxes, hurdles, hex bars, even exercise bikes,” the Australian, who has been with Palace since October 2010, adds.

Orme says: “There was a bit of a siege on the gym at the training ground when we were told we would be spending some time at home - there’s definitely not much equipment left in there at the moment!

“That shows how keen the players are to make sure they are looking after themselves and staying in good physical condition though.”

In terms of the training programmes, simplicity has been key.

“We’re treating this like the off season, and we’re pretty relaxed during the off season,” says Guyett. "There’s no good putting the lads on seven or eight sessions a week when they might not be back for eight weeks.

“We won’t be going straight into games once the return is announced, so the intensity of training can be ramped up when we have some more certainty.”

The days of players gorging themselves when they have time off have also gone.

"A big thing for me is trust and we have a lot of very good pros here," Guyett says. "I trust them and the manager trusts them. Just before the break we had three wins on the spin and full availability.

"So there’s competition for places and the players know they have to look after themselves to get in the team."

At Grimsby, Lester says all the players have been given a "basic physical programme" incorporating both bodyweight exercises and different running sessions.

“We've made all our exercises simple to the point where no-one needs any equipment and everyone can do it," he explains. "The programmes are individualised, based on what areas each player needs to develop.”

Orme agrees: “We’ve just tried to keep things as simple as possible, so we know we are ticking all the boxes with regards to maintaining their physical condition but also so we get maximum buy-in from the lads.

"If we make it too complicated, then they’re more likely to lose interest and either do their own thing or do nothing at all.”

Expecting players, even at Premier League level, to do what they usually would at this stage of the season, is completely unrealistic, admits Guyett.

“On average, our players would be covering 28 to 32km in a typical a week,” he says. “It’s very hard to do that outside of a football context, to get the accelerations and decelerations we need, so you have to be realistic about what you can do."

Bristol City's players are doing intervals of four-minute runs to maintain their aerobic base, with shorter intervals of 30 seconds to two minutes of high-speed running so they don’t lose anaerobic capacity.

Once a week they push up towards maximum speed, “so we can hopefully keep the hamstrings conditioned to cope with sprinting,” Orme explains.

At Grimsby, the players are having two 45 to 60-minute runs at medium intensity each week, to maintain the aerobic base and sharpen mental focus, and there are three days of more football-specific running, with varied intensities, hill runs and changes of direction.

After every fitness session, Palace's players fill out an online document to rate their perceived level of exertion with a score of one to 10.

Before locking the door on the training facility, Orme ensured his players had heart rate monitors and GPS pods to take home. He says the data will be vital in charting the players from post-shutdown to return-to-play.

“The devices enable them to record all the sessions that they are doing," he says. "A few of the lads have posted videos of their sessions on social media and it’s good to see them wearing their vests.”

The heart rate monitors are good at "ensuring the players are getting a good amount of red zone minutes,” Guyett says.

Using GPS isn't necessarily as easy as it sounds though, which is why clubs usually have staff who manage the pods and download the data.

“The lads have to be mindful of turning the GPS pods on and off immediately before and after training,” the Palace man says, “and they need to download the data and recharge them.

Players from all three clubs have also been using the Strava app, which is simple to use and popular among the wider public. It allows an element of competition, which players can miss when they're isolated at home.

“Our Strava group has got competitive - even I’ve joined in!” admits Lester.

Technical training is difficult when players are on their own and without access to training pitches. Some of Palace's players live near a 4G facility and have been using that, but this isn't the norm, meaning clubs have to get creative. 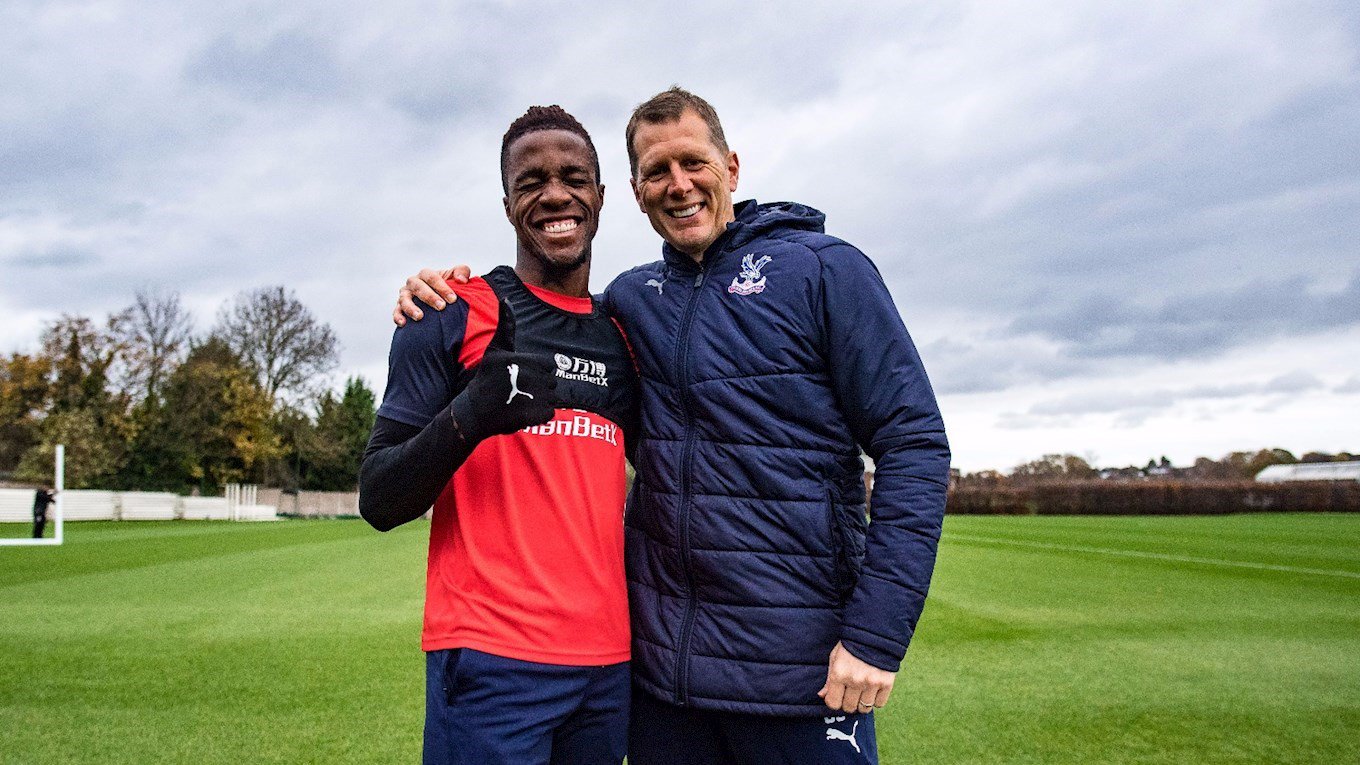 “Some players are very restricted with space and some players have the ability to do more,” says Lester, “so we've created a series of basic drills which include a wall, a ball and four cones.

“They involve short passing, turning, first touch, manipulating the ball. The footwork programme mixes up their work-outs, working them physically alongside getting a ball at their feet.” 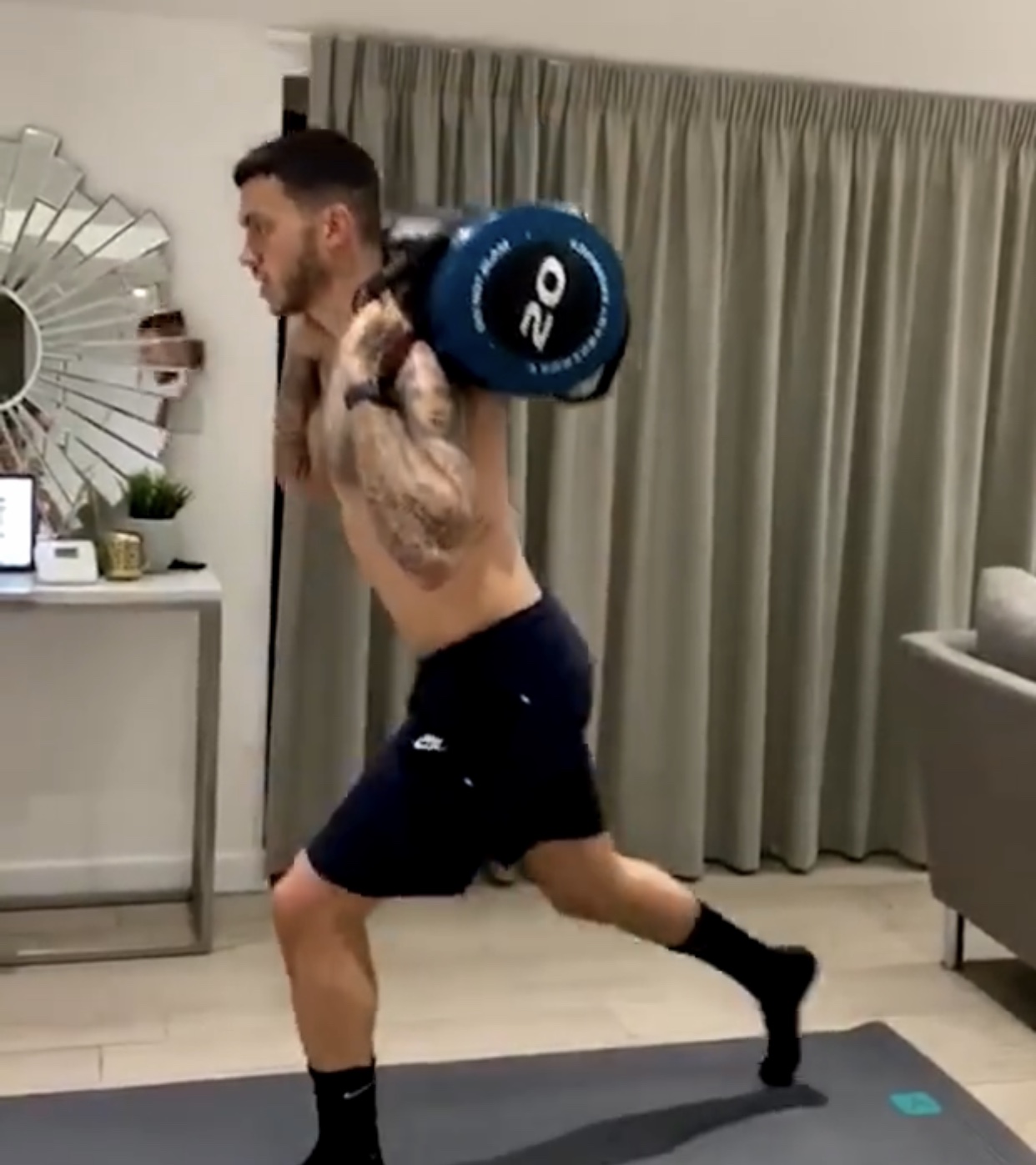 The club are also “working on something similar to Strava for the technical drills”, in order to introduce competition.

“Ideally it will involve leaderboards for the amount of touches and so on, and maybe a forum for players to send in their videos,” says Lester. “A device or programme that allows us to track technical ability would be very useful at any time, but it would be a massive help right now.”

Some of the players, like Bristol City defender Pedro Pereira, have been posting their home routines on Instagram (picture top of the page and in this section). Communication, often using WhatsApp, has been crucial for players suddenly shorn of dressing room camaraderie.

“We’ve assigned groups with one member of staff and four or five players," says Guyett, "so there’s that personal feel and the players can stay in touch and also raise any needs or concerns they might have.

"They have group chats on WhatsApp and it’s a way of trying to maintain that dressing room spirit they usually have.”

Coaches know when pre-season will end. For the shutdown, the first possible end date has already been moved back by nearly a month, and the new date seems little more than a faint hope.

“We are operating week by week,” Lester admits. “From our basic calculations at the start, we figured every week off would put the players a week behind. With the break going longer, we can get them back to full fitness and ready to go in a max of four weeks.”

Bristol City’s Orme thinks the period of “rest and reduction in training load” could be helpful to the players - in the short term at least - and his mission is to make sure that their training programmes will “keep challenging them to the appropriate extent.”

But, as Guyett says, you ultimately can’t “plan for the unknown and you can’t refer back, because this has never happened before”.

* George Perry is a performance coach who specialises in movement training and post-injury return-to-play. He has a Masters in Sports Science and Nutrition from the University of Texas.