The new regulations are mandatory from the start of 2024/25

GERMANY has launched new regulations that will transform the way football is played by Under-11s in the country.

The emphasis will be on fun and a player-centred approach, with Ronny Zimmermann, DFB Vice President responsible for children’s and youth football, saying: “We need to think like children, not like adults. Only children who develop fun and joy in the game will stay in football.”

This is an antidote to the formats we can sometimes see, including in this country, where children are playing big-sided games at young ages, where the less physically or technically developed youngsters can have limited time on the ball and where adults (parents, coaches and referees) are driving the sessions, sometimes to the detriment of the players.

The key principles of the DFB's new regulations are:

The regulations have been introduced after a two-year pilot phase that involved all 21 regional associations, during which time there were "good experiences" and "very positive" feedback from children. The DFB Bundestag, the country’s ‘football Parliament’, formally ratified the regulations on March 11th.

Districts and clubs can now implement the new formats, although they MUST be introduced from the start of the 2024/25 season.

“Playing with the ball and scoring goals are the main reasons why so many children and young people enjoy football,” the DFB said in a statement. “The new forms of play are intended to give all children on the pitch the opportunity as often as possible to have the ball at their feet themselves, to take an active part in the game, to score goals and thus to have a personal sense of achievement.”

The changes are heavily influenced by the concept of ‘Funino’ (a synthesis of the words ‘fun’ and ‘nino’, which is the Spanish for child), which was developed by the late coaching guru Horst Wein.

Here is some more detail on the new formats:

“The new design makes football more child-friendly in the relevant age groups,” the DFB explained. “The smaller the groups then the more ball contacts the individual players have.

“Especially underperforming or physically inferior children have been lost in the classic competition formats and have lost the fun of the game and the chance for further development.

“The new forms of play are intended to offer children better opportunities to play football in such a way that they are often on the ball and have fun doing it. In children's football, tactics are often emphasised too early, which affects the development of the basics of football. Many studies have shown this. The changed game forms are intended to counteract this problem.

“What is football? Game, fun, goals - that's exactly what the new system promotes. Children can score goals in many ways, even the children who are not (yet) among the best performers.

“In addition, the children dribble more often and have more ball actions, which promotes technique and improves each individual child's sport. Defending is also trained more intensively and individually through 1:1 situations. 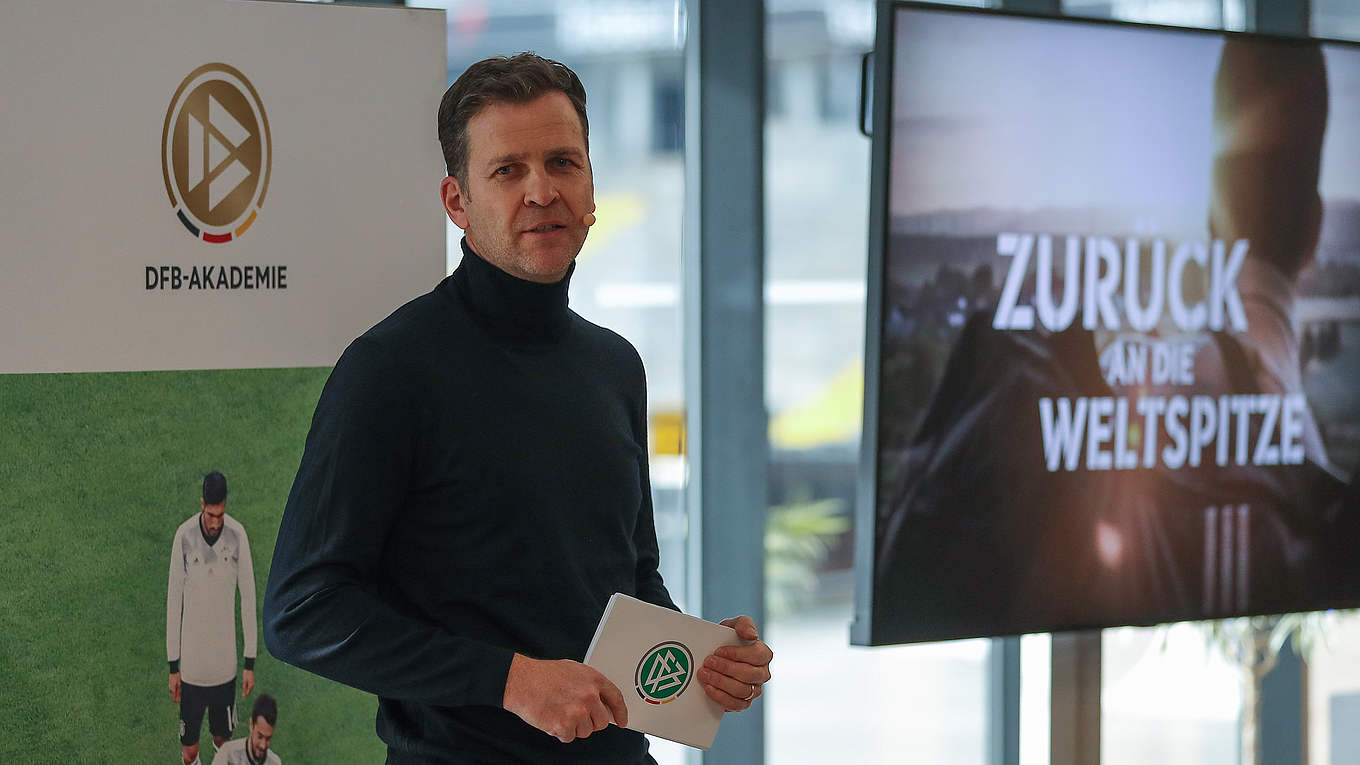 READ MORE: Germany lays out plan to return 'to the top of the world'

“Traditional referees are not used. The trainers and supervisors act as joint game masters and only intervene when necessary. The decisions during the games should be made by the children themselves as far as possible.

“With the previous forms of play in the lower age groups (7 v 7) it is much more the case that the slower and less talented players hardly get to the ball and often play in positions that keep them away from the actual game.

“The new forms of competition ensure that headers are almost impossible, because the size of the playing field is significantly smaller, throw-in and goal-kick are replaced by dribbling in and the goalkeeper hardly ever takes a kick-off. In this way, the DFB and its state associations deal with heading at a young age in an age-appropriate manner, without having to impose bans or regulations, as some other national associations practice.”

The DFB suggested that the new regulations could impact more half a million children in 35,000 teams in more than 10,000 clubs.

As TGG has previously reported, these changes have been in the pipeline for several years.

In February 2019, Oliver Bierhoff, Director of National Teams for the DFB, led an event titled 'Zuruck an die Weltspitze' ('Back to the Top of the World'), with the backdrop of Germany's humiliating exit in the first round of the 2018 World Cup and the Under-17s finishing bottom of the Torneio Internacional in Portugal.

Bierhoff said: “We need room for individualists, we need more football-pitch mentality. It needs more feeling again. Through freer training, street football should be brought into the clubs. We need to create more space for creativity and enjoyment for our players."

Panagiotis Chatzialexiou, the Sport Director for National Teams, added: “If possible, it should go without a referee. The players should just learn to work it out. We're already letting our youngest play seven v seven in games, which is not age-appropriate because they have too little ball action and too few decisions to make.

"Our little ones have too little ball action and they rarely have to make decisions. Our analysis has shown that at least a third of our talents are not optimally developed.”

Van Der Haegen, who has appeared on the TGG Podcast and spoken at our 2019 Youth Development Conference, said: “One of the main principles is that the main actor is the player; not the coach, not the team. Then it’s very easy to understand that in children’s football we have to do what they like.

“We call it the tailor-made approach. Who is in front of me? Look at the characteristics of the player and then adapt the environment to fit them. Kids want to play football in their own way, not the way adults want to play. If you put a child on an adult’s bicycle, they’ll say, "are you crazy?" But this is what happens in football, we ask them to play 11 v 11 or 8 v 8 at a very young age. They are not able to do it.”

Former England Rugby coach Brian Ashton has also been influential in this regards.

“I was brought up in the era of street games,” he told TGG. “No adults, no coaches, no-one to interfere and no-one to inhibit what you were doing. We looked after ourselves and self-learned techniques to adapt to ever-changing situations.”

In May 2020, German giants Bayern Munich announced they would not be taking youngsters until the U11s, meaning that grassroots clubs will take care of development before this.