ARSENE WENGER was a big believer in the importance of scanning.

“What is interesting is that very good players scan six to eight times in 10 seconds before getting the ball and normal ones three to four times,” the Frenchman said in an interview in early 2019.

As Wenger suggested, much of the focus around scanning has been about how many times a player does it. However, as Professor Geir Jordet explained at TGG’s Big Data Webinar last month, there’s no point scanning a lot if you’re doing it the wrong way.

By way of introduction, Jordet, who works at the Norwegian School of Sports Sciences in Oslo, is THE leading authority on scanning in the world, having conducted extensive research on the subject.

He defines scanning as "a body and/ or head movement in which a player’s face is actively and temporarily directed away from the ball, with the intention of looking for information that is relevant to perform a subsequent action with the ball.”

To illustrate his point about the importance of scan timing as well as frequency, Jordet played footage from a Heerenveen match from the 2017/18 season. 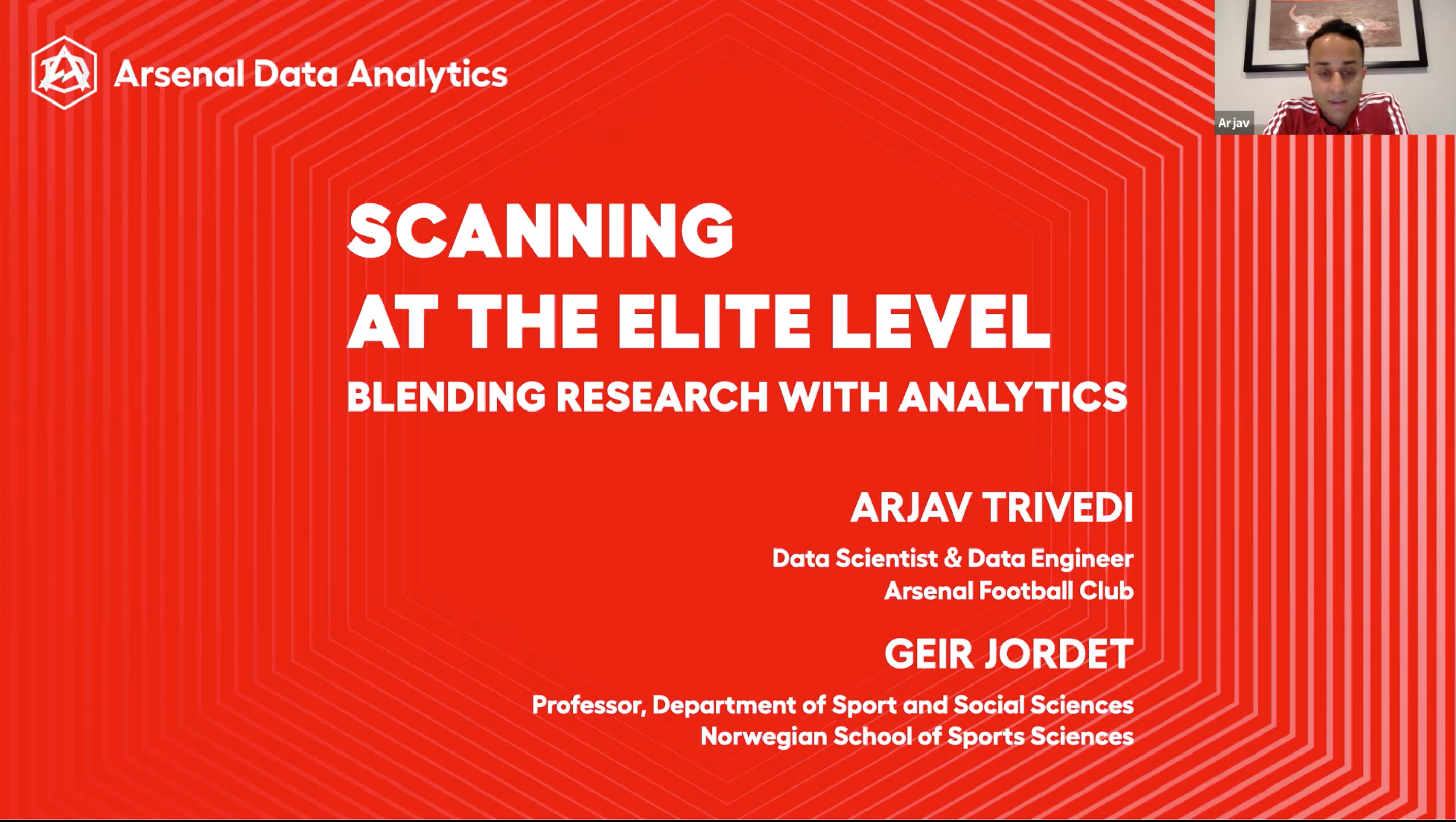 "You see here a Heerenveen player who has a quite high scan frequency - five scans in the next five seconds - yet his timing is all wrong, he scans at the wrong time,” Jordet explained in the clip, which you can watch below.

"Every time the team-mate touches the ball, you want to make sure you have your eyes on the ball, because that’s the moment in time when the most information-relevant area on the pitch is the ball.

"He fails to see the initial flight of the ball when the pass is being hit and then he’s too late.”

By way of contrast, Jordet showed a clip of Martin Ødegaard from the same match. Ødegaard was on loan at Heerenveen from Real Madrid at the time and is an exceptionally good scanner, as Jordet explained.

"He has an even higher frequency (than his team-mate), but his timing is perfect. Every time his team-mate touches the ball he looks at the ball; between the touches he looks away from the ball.

"That's the way to increase the probability that your eyes are exposed to the most important information at any point in time. The key is that when the ball is being touched you want to make sure you look at the ball.

"This is the problem you often see with players when they try to learn how to scan. They are taught from a coach that you have to scan and they do that, but they fail to see when there is important information around the ball.

"Then they come back discouraged because ’scanning doesn’t work for me.’”

Jordet believes "we can almost formulate this as a law.”

He explained: "The correct timing is to look at the ball when it’s being touched, it’s wrong to look away. Between touches and immediately after a touch, this is the point in time you want to look away from the ball.”

The Norwegian has recently completed the most extensive ever piece of research and analysis on scanning, titled 'Scanning, contextual factors and association with performance in English PL footballers: an investigation across a season,' which is open access and available here.

It was a collaboration between the Norwegian School of Sport Sciences and the Arsenal Research Group. At the Big Data Webinar, Jordet and his co-author Arjav Trivedi, a data scientist at Arsenal, delivered a presentation titled 'Elite Scanning: Blending Research and Analytics,' which was based on their research project.

You can watch the full 55-minute presentation - as well as five others - on-demand via this link.