Arsene Wenger: Top players have radars in their heads

Xavi was off the scale when it came to scanning

ARSENE WENGER says a top player has a “head like a radar” and that more work needs to be done on perception and decision making at young ages.

Speaking at SiS Paris, the legendary Arsenal manager said: “The problem in football is that you learn how to play [the wrong] way round - first execution, then decision making and perception last.

“I have lost many top players because their head was on the ball and they were not seeing what was around them. Great players isolate from the ball, their head is like a radar.

“Once a circuit is printed in their brain, we managers find it extremely difficult to change that. It’s vital not to harm the perception with young boys because they learn first the execution from five to 12. 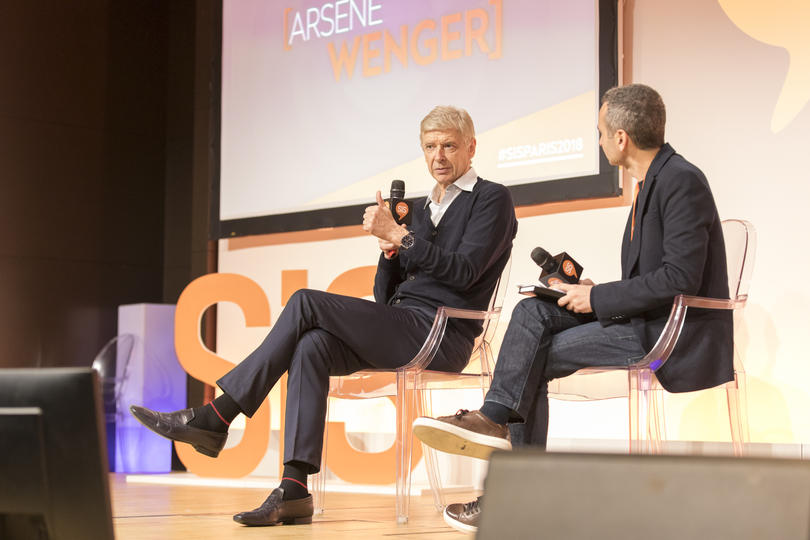 “As a player, whenever I get the ball I have to analyse, then decide and finally execute. Perception plays a huge role in this. I worked with a University in Norway to identify how I could improve perception.

“Basically, I came to the conclusion that it is about getting as much information as possible before I get the ball. I call that scanning. I try to see what happens to a player in the 10 seconds before he gets the ball, how many times he takes information and the quality of information he takes. It depends on the position.

“What is interesting is that very good players scan six to eight times in the 10 seconds before getting the ball and normal ones three to four times. That is a major step for improvement.

“However, more important - you have to analyse the quality of perception and decision making. My challenge is to get my players to know which the best choice is and make the optimal decision every time they get the ball.

“The player has to scan and decide. When he has decided he has to make the best possible solution. This means a compromise between risk and the progress of the ball."

EVENT: Professor Geir Jordet will be speaking at Big Data on 15 December

The work Wenger was referring to was by Professor Geir Jordet at the Norwegian School of Sports Sciences.

Jordet is the world authority on ‘scanning’ and completed both his Masters thesis and PhD on the role of vision, perception and anticipation in elite performance.

In a 2011 interview with The Guardian, the Spanish midfielder explained: “I am always looking - all day. People who haven’t played don’t always realise how hard that is.

"Space, space, space. It is like being on the Playstation. I think ‘shit. the defender is here, play it there.’”

Jordet has cited the clip below - from Chelsea’s 5-0 home win against Blackburn in October 2009 - as an outstanding example of scanning. Lampard is seen to look around 10 times in seven seconds before receiving the ball. He then jinks round one man, who he had seen coming, before playing the pass, exhibiting what must have seemed to his opponents to be a sixth sense.

HOW DO YOU TEACH IT?

Jordet bumped into Lampard and asked him why he was so good at scanning. The England midfielder was slightly mystified, replying: “I guess I was born with it.”

As Lyttleton points out in Edge, this can be the problem with elite players (and why they often make poor pundits) - they are frequently not able to explain why they are good at something, because they do it intuitively.

However, when the Norwegian asked West Ham Academy Manager Tony Carr about Lampard's special skill, he was illuminating.

“In the first game Frank played for West Ham, his dad would sit in the stands and shout at his son all the time," Carr explained. “He’d say the same thing, every time - ‘Pictures! Pictures!’ He just wanted Frank to have a picture in his head before he got the ball.”

“I didn’t know it was called scanning, but I knew it was very important, from my own playing career [he played 551 times for West Ham and twice for England]," Lampard Snr said.

"That’s why I was shouting ‘pictures’ at Frank from the sidelines. I can remember it now. I was probably annoying him, but I knew it was important.

“All the best players do this naturally. Or I should say it looks natural, because it will have been drummed into them from a young age.

“It’s crucial, because the higher you go, the less time you have on the ball. You need to gather all of the information you can before receiving the ball, so you can make quick decisions once you have it.”

Former Manchester United Under-18s coach Paul McGuinness, who is now a coach educator for the Football Association, told TGG that legendary youth coach Eric Harrison did the same. He drilled this into the likes of Paul Scholes and David Beckham during sessions at The Cliff.

“Look at someone like Paul Scholes - one of the greatest central midfielders ever to play the game,” McGuinness told TGG. “Look at how he’d scan the play before receiving the ball. That was crucial to his game and you could trace it all the way back to the sessions he'd had with Eric."

Frank Lampard Snr was teaching his son about scanning - or 'pictures' - 30 years ago, as was Harrison at Manchester United. Now technology could have a role to play though.

"It’s not just about moving the head," Etches told TGG, "the crucial thing is that the player sees things and makes decisions based on that.

"With Mi Hiepa, we are able to directly measure what people are seeing through head tracking and eye tracking. We can add match scenarios, false pressure and distractions.

"Then we have biometric markers we can measure and track. We've seen that the best players are outstanding on perception and decision making and, as Arsene Wenger says, this is something that needs to be learnt at practiced from a young age."