Ged Roddy: The core functions of an elite Academy

MAJOR changes have taken place in youth development in English football over the last decade and a wide range of new programmes and processes have been developed to enhance player development.

There has been massive investment, new staff roles and even bespoke language and terminology. At times, it can be bewildering for the uninitiated, which can be a problem for players and parents trying to understand exactly what’s going on.

At the other end of the scale it can also be frustrating for busy club executives who have the wider club to run and do not necessarily have the specialist knowledge of youth development to quickly grasp it.

Here is a model and guide I have used with parents, players and executives to try and explain things. In reality, the fundamental structure of the Academy is rooted in just four departments, which are all organised to support the development of the player.

Here's a diagram of these departments - showing that the player is at the centre of the whole process and that productivity is the ultimate objective of an Academy - with a more detailed description below. 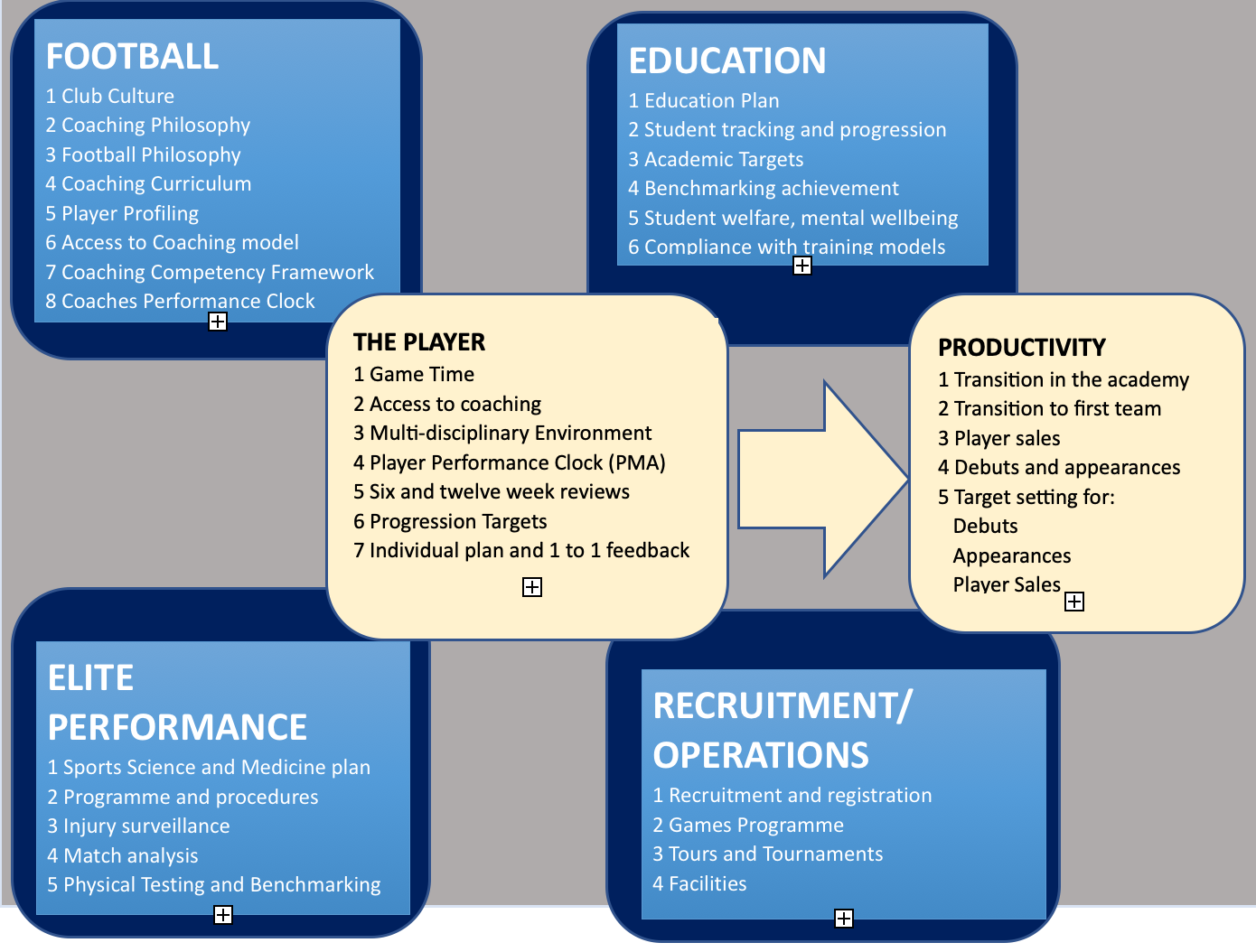 The Football Department is staffed principally by coaches and is led by the Head of Coaching and/ or the Academy Manager. Its role is to lead the coaching of players and teams. The coaches will devise and deliver the curriculum, which will form part of the Academy Performance Plan and is reviewed on an annual basis.

Club Culture: Strategy of the club, linked to its history and traditions.

Coaching Philosophy: Approach to coaching of players across the performance pathway from Under-9 to first team. Defines the pedagogical approach and communicates teaching/ learning styles etc.

Football Philosophy: Technical and tactical approach to playing the game and refers closely to the club’s playing style.

Coaching Curriculum: Comprehensive session-by-session programme that identifies the priorities for learning and development at each age group across the course of a season.

Player Profiling: Position-specific characteristics that the club prioritises. Player profiling will be influenced by the approach agreed in the Football Philosophy or playing style of the club

Coaching Model/ Coaching Staff Roles: Staffing structure and processes adopted by coaches to mutually support each other, the players and the curriculum.

Coaching Competency Framework: Process by which each coach self-assesses their competency against agreed benchmark measures. The Head of Coaching will usually lead and support the delivery of this service to coaches. 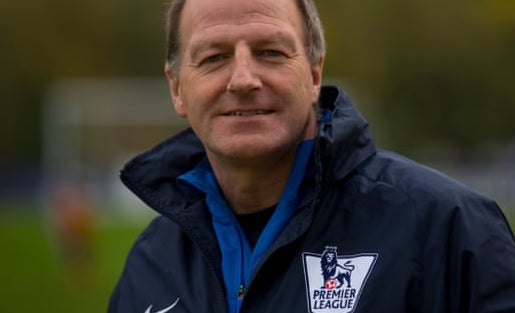 Ged Roddy MBE is the architect of the Elite Player Performance Plan (EPPP), which was introduced in 2012 during his time as Director of Youth at the Premier League. The ultimate aim of EPPP was to produce more and better homegrown players. From 2016 to 2017, Roddy was Director of Football Development for the Premier League, before becoming Academy Manager at Category One club Reading. He now runs his own company called the Elite Performance Partnership.

Coaches Performance Clock (Development Action Plan): An annually agreed plan that identifies the development priorities for a coach. It is closely linked to the delivery of Continual Professional Development for the coach.

Coaching Staff roles: Identifies the job description, roles and responsibilities for each coach.

The Education department is staffed by qualified teachers. The minimum responsibility of the education staff is to maintain the education progression of players in the academy. The Education Plan is an annual plan for delivery of education and sits inside the Academy Performance Plan.

Education Plan: Strategic plan for the delivery of education to players across all age groups. Will usually be reviewed on an annual basis and will form part of the Academy Performance Plan.

Education Tracking: Process by which each player's education is monitored by the education staff.

Transition and benchmarking (EMS): The movement of players through the Academy and the capture of data relating to their education development. The EMS is the Education Management System – an online system that enables clubs to benchmark the education progression of players.

Education models: Different approaches to delivery of education. Part time, hybrid and full-time. The delivery of each type of model has implications for resources etc for the education department.

The Elite Performance Department is staffed by a range of professionals from sports science, strength and conditioning, physiotherapy, medicine and performance analysis. It also covers a range of support services, so it is more multi-disciplinary than other departments in the Academy. The Elite department plan will cover key elements of sports science, strength and conditioning, medicine, physiotherapy and match analysis

Programme and Procedures: Daily delivery of sports science and medicine and associated procedures.

Injury surveillance: Online system for recording and analysing incidence of injury across the development pathway. Commitment to the national system gives individual club access to the national trends and benchmarks.

Match analysis: System of support for training and games. Match analysis interventions support the technical and tactical priorities of the coaching staff which should be in line with the coaching and playing philosophy of the club.

Physical testing and Benchmarking: Commitment to periodic measurement of fitness and physical development. These measures are benchmarked by committing the club to the national fitness testing programme which enables the club to gain access to the benchmark measures. The physical testing programme can be used to create baseline measurements of players capabilities and capacities. These baseline measures can be used to support rehabilitation programmes.

PMA: The Performance Management Application. This is an Academy-wide online tool designed to record progress and achievements of all players in the system. All licenced academies are required to keep the PMA updated in the interests of the players. The Elite Performance Department will usually lead the co-ordination of input into the system along with the coaches.

This department is sometimes split into two, given the importance of the recruitment processes in their own right.

Recruitment and Administration: Scouting and Academy recruitment critical to the success of the Academy. Administrative systems support the co-ordination of scouting in the field.

Games Programme: The formal games programme provided by the league/ FA, which provides the core programme for players. The Academy has responsibility to create playing opportunities over and above the core programmes. A Tours and Tournaments plan should feature as part of the games programme. The Games Programme should create natural opportunities to extend and consolidate learning for players (this assumes that there will be different types of challenges using different game formats and different levels of competition).

Facilities: Management of the Academy infrastructure and liaison with grounds staff.

Player induction and Exit Procedures: Formally-agreed processes for inducting players into the Academy once the trial process has been completed. Formal exit procedures are designed to provide staff and players with a well-defined process which is designed to make the process supportive. The Exit Procedures should include a commitment to future tracking of released players.

Multi-disciplinary environment: Characterised by the co-ordinated approach adopted to the sharing of information regarding the progress and development of each player in the Academy. Optimum support for the development of the player is achieved when the departments communicate effectively together.

Player Performance Clock: The Performance Clock (PMA) is an online system which captures the progression data for every player in the Academy system. It is a record of achievement which the player has access to.

Individual learning plans (ILPs): Individualised development plans for each player. The learning plan will identify the technical and tactical priorities. The Learning Plans will also include prioritisation for physical development and education progression.

Progression Targets: The targets will normally be captured in the ILPs.

Parents Evenings: Take place every 12 weeks during the season and provide parents and guardians with an update on the progress that each player is making. The player would usually be present at this meeting and the PMA would usually be used to demonstrate what has been captured/achieved during the period.

Game Time: Allocated match time in minutes that each player gains access to as part of the academy games programme.

Match Analysis: Access to match analysis and game clips is also a service that should be provided to players. Match analysis (clipping of footage) may well be done by the players. Match clips will be used in the one-to-one meetings between players and coaches.