The Analyst: Why set pieces are such a weapon for Sheffield United

Chris Wilder and his assistant Alan Knill are set-piece alchemists

SHEFFIELD UNITED are arguably the most upwardly mobile club in the country. After a wobbly start last season, they steamrollered League One, finishing as champions with l00 points. They now sit third in the Championship and continue to pick up points at the same rate as they did last season, which is kind of absurd when you think about it.

I’ve been lucky enough to watch them a couple of times this season and, tactically, they’re genuinely interesting. They set up in a 3-5-2 and are pretty consistent with their attack-minded, high-energy, high-pressing approach. They also have a very interesting tactical ploy in occasionally using overlapping centre backs to provide an overload on the wing.

In this article, I’m going to put one particular aspect of their play (which they are very successful at) under the microscope: set pieces.

Part 1: The Back Story

I’m a Luton fan and was in the stands enjoying this game. Northampton had started the season very well - they were joint-top of League Two and managed by a certain Chris Wilder and Alan Knill. Luton took an early lead in the ninth minute before this happened in the 18th…

This was probably the best set piece routine I’ve ever seen in the flesh. Our defence was pretty clueless that season but, in fairness to them, I think this routine would’ve had even the wiliest of old-school Italian defences chasing shadows.

This time I was on my sofa watching a round-up of the EFL goals. The match-up between Scunthorpe and Sheffield United was pretty unremarkable until this happened…

If I was impressed the first time, I was doubly so now. I realised how seriously Wilder & Knill (I’m led to believe it’s mostly Knill) take their set pieces. Anyone who can turn a regular, edge-of-the-box free kick situation into a one-on-one with the keeper has my attention.

This time I was in attendance (for work reasons) and the Blades took the lead:

There are question marks over the goalkeeping, sure; but this was once again a routine that had the defence dumbfounded and frozen in the headlights. Charlton didn’t know what to do once Mark Duffy made his run into the right channel (aided by some clever blocking by Chris Basham, #6). Even if Duffy didn’t shoot, they had still managed to create a dangerous cut-back situation. And this was a free kick in which many teams would have opted to have a direct shot (resulting in a goal 5% of the time).


To get a general overview of how Sheffield United have been performing on set plays this season, we’re going to look at what the data says about their set pieces, kindly provided by Stratagem.

(If you’re unfamiliar with the concept of Expected Goals/ Chance Quality then give the paragraph at the bottom of the piece a quick read).

This is how the Championship teams rank in terms of attacking set piece performance. The data is filtered to include only chances created from corners and free kicks (it doesn’t include direct free kick shots).

First up, the total chances created from set pieces this season: 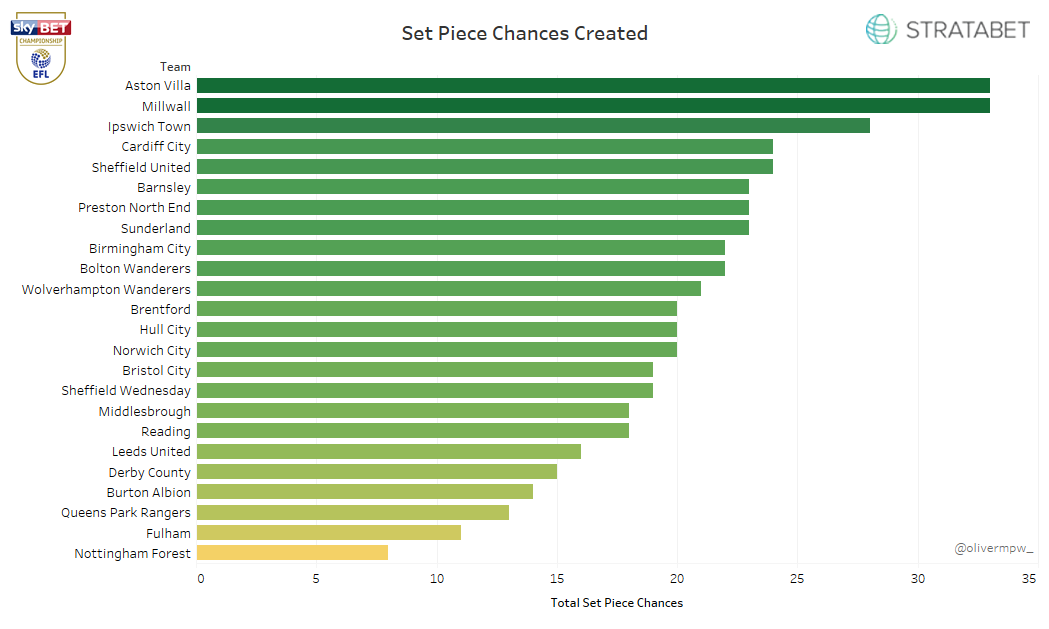 But what about the quality of the chances created from those plays? Here are the total expected goals created from set piece situations: 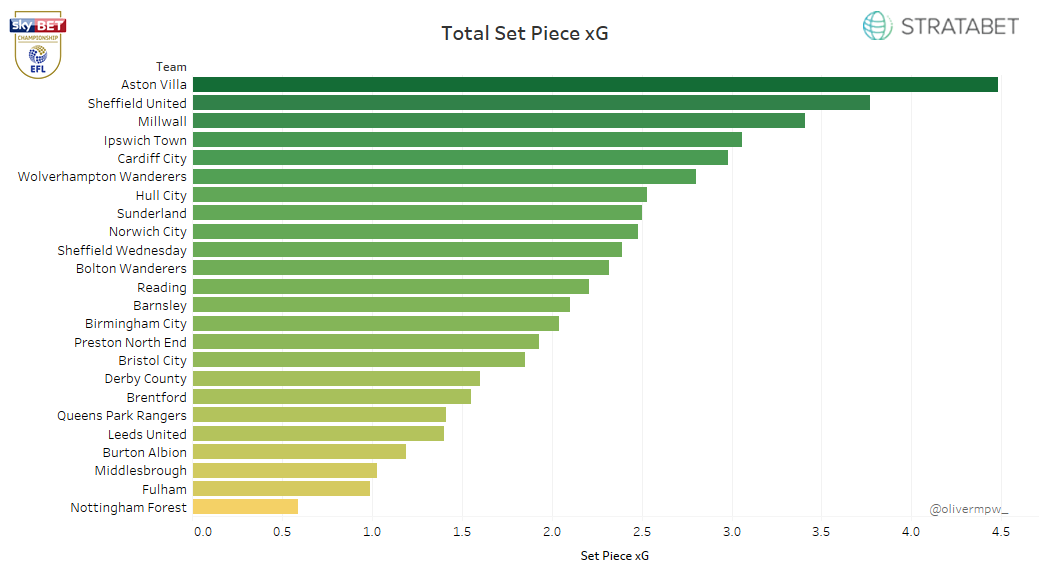 Again, the Blades are stacking up well here, ranking second 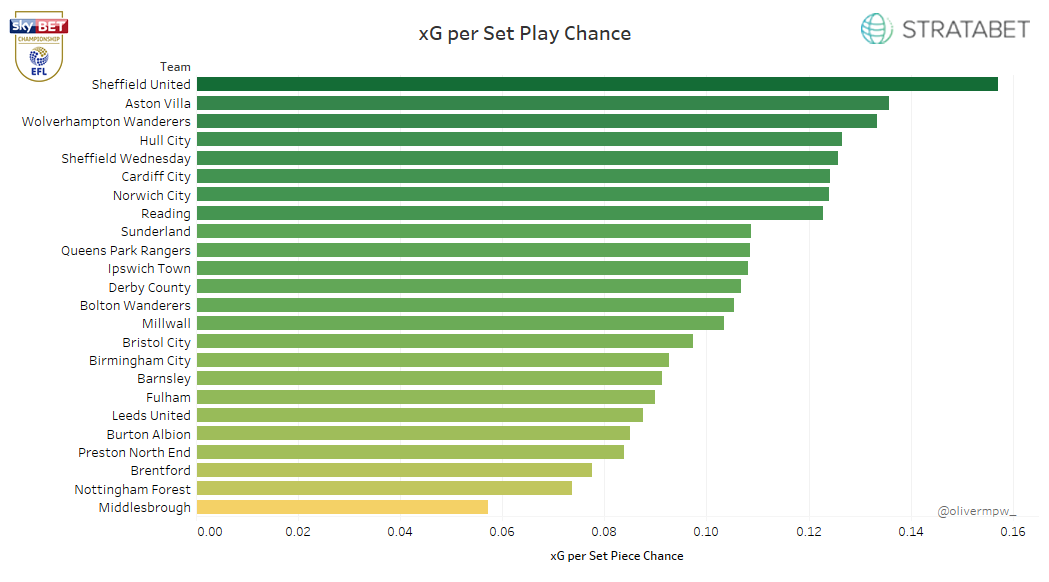 Of the chances that the Blades have created, the average quality is higher than the rest of the league.

Before we move on, we want to know which players have been the most dangerous outlet for Sheffield United.

Meet Jack O’Connell, or Jack O’Cornerll, as I like to call him. The League leader in expected goals from set pieces is an absolute pain in the backside for defences, as we’re about to see.

Twelve chances may seem a low number, but the data will only account for occasions in which O’Connell has got a shot off (or come very close to getting one off). It won’t include the times when he’s played knock downs for other players, or made an excellent run but hasn’t been rewarded with a good enough delivery to get an attempt on goal.

As any Real Football Man™ will tell you, football isn’t played on spreadsheets. So now we’ll watch some video of what Sheffield United have come up with this season - and why they’re one of the most dangerous teams in the Championship from set pieces. 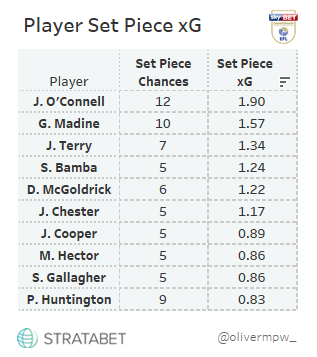 We’re going to look at corners and free kicks separately, and at the trends for each, to see if we can pick up on what Sheffield United are doing to generate such a threat.

I should point out now that I’m using data up to 20th November, as that matches the data I have available for the expected goals graphics above – so Sheffield United have played 17 games in the dataset I have available. They’ve had 114 corners in this time and I’ve watched every single one of these in video and collected some basic information about the delivery of the corners to try and break down what Sheffield United are trying to do.

Here are some initial primers on what you’re about to watch:

In their recent fixture against QPR (October 31st), United managed to create a humongous space at the far post. There are a few things to break down here as to how they managed to do it. It might require you watch the routine more than 10 times, but stay with me, it’s worth it:

Now we know how the space at the far post is created, we can look at how it is exploited:

It’s so damn smart, but somehow O’Connell fails to hit the target.

There are two main trends I’ve observed from Sheffield United’s other corners and how they look to create space to attack:

This is United’s main strategy for creating chances vs man-marking set ups.

Now, a slightly different version of the routine that reinforces the point, against Hull.

This time it’s a near-post run. Keep your eye on the bottom right of the video as Duffy prepares to take the corner. Carter-Vickers is clearly watching and waiting for O’Connell to make his run before making that trademark step across the defender. Football is a game of fine margins and that half a second gained on the defender allows a free header at goal.

2) Using runners to create space at the far post.

Sheffield United are great at using runners to create space for O’Connell to attack. In this one, vs Ipswich, United start off with five men in the penalty area – three in the six-yard box and two in formation near the penalty spot - and starting from the six-yard box, Leon Clarke and Chris Basham make runs towards the near post, taking four Ipswich defenders with them.

Thanks to these runs, O’Connell, starting at the top of the penalty area, is in a one-on-one he's always likely to win.

All the examples above have been (broadly) man-marking set ups. But how do United fare against zonal marking?

I couldn’t find too many clips to give the question a definitive answer, but this one vs Norwich is probably the best.

Norwich line up with a seven-man defence on the edge of the six-yard area, also placing one man on the far post.

Sheffield United’s answer to this is simple (and heartwarmingly familiar by now) - block the far side defender and allow O’Connell a free header. You can see Jake Wright get into position to block Cameron Jerome (#10) and make sure he isn’t able to make any movement towards the ball.

United almost always take these with an in-swing, much like their corners. This seems smart as, with less of a gap between the defensive line and the goalkeeper, there is little space for any attackers to run into, so an in-swinger makes up for the lack of running space by allowing the striker to use the movement of the ball to guide it towards goal rather than trying to change the direction of the ball.

By the same token, it’s slightly harder for defenders, as they have to be more precise about any clearances with the ball moving towards their goal rather than away from it.

An example of this was vs Cardiff:

In contrast, United show a preference for out-swinging free kicks from deeper wide positions. With these, there’s a large space between the defensive line and the goalkeeper, so the attacking players will now have more room in which to attack the ball. With an out-swinger, this leaves little chance of the goalkeeper coming to intercept the ball which, if executed correctly, leaves the attacker in a one v one duel with his defender.

Leon Clarke showed a good execution of a typical Sheffield United deep wide FK vs Wolves, sticking to his man and using the pace of the ball to head it back across goal:

This next one is slightly different as it looks more like it’s just down to the improvisation and excellent communication of Fleck (delivering) and Billy Sharp (receiving) but my hunch is that the look they share is an indication that this was pre-meditated. Just watch how Sharp appears to be jogging back into position but gets Fleck’s attention and they share a look before Sharp spins off the defence.

This season United have already used a couple of the Wilder/ Knill routines that initially piqued my interest and which I mentioned at the top of the piece.

This was against Reading:

Now, this one didn’t come off because Chris Gunter read the situation and was able to get across to block. But I really do love this routine, because when it works, it turns a poor goal-scoring chance into a great goal-scoring chance.

And now for the other routine, v Nottingham Forest:

There was no goal this time and it's probably not as pretty as the previous masterpiece, but, as you can see, a cutback is a more favourable position than a cross from the free kick starting point.

* I pulled this number out of thin air.