Why clubs need to discover their DNA

DNA: The fundamental and distinctive characteristics or qualities of someone or something, especially when regarded as unchangeable.

The Football Association describes its DNA as “a golden thread running through all England teams.”

This is a blueprint for how England internationals should play, think and be coached, and was unveiled at St George’s Park in December 2014 following 18 months' of consultation.

Beneath the straplines there is significantly more detail, including a definition of the attributes of each position.

For example, the "future England goalkeeper” is someone who can “play an important role in all aspects of in-possession playing philosophy” and “fulfil the role of the 11th outfield player,” which, worryingly for Joe Hart, looks very close to Pep Guardiola's definition too.

Pete Sturgess, the FA’s technical lead for the foundation phase, told TGG that the DNA was created to point everyone “towards one strategic goal - to make England competitive on the world stage” and “to develop a real direction, not just the England teams but the whole nation."

“To do that, you need a really detailed plan,” Sturgess added. He believes the DNA was one of the key factors behind England’s 2017 "summer of success", in which four teams won international tournaments while playing in a distinctive style. 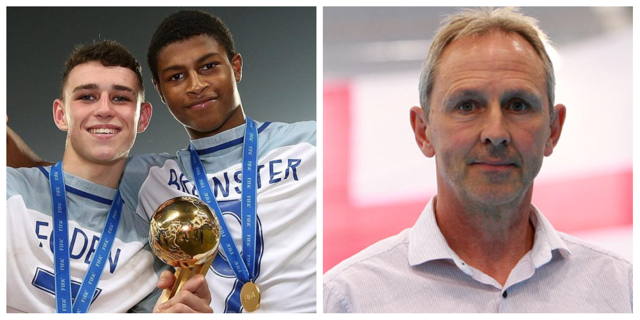 READ MORE: How the FA is building on England's summer of success

Having a clear philosophy and plan clearly makes sense for any organisation. One of my own observations about the FA's DNA is that it seems quite generic, failing to distinguish England from other international teams.

Don't most sides aim to have players with "outstanding skills and decision-making ability”, who exhibit “pride, integrity and excellence"?

In Carlo Ancelotti's excellent book, Quiet Leadership, there is a fascinating section on the different characteristics of the nations he has worked in.

This is what he says about England:

"If I had to go to war, I would go with the English, not with the Italians, or the French. It is absolutely essential to understand the culture, which is macho, like the South Americans, but in a quiet, understated way.”

This seems to be something we, as a footballing nation, shy away from. Shouldn't these characteristics of bravery and defiance be embraced, especially if allied with intelligence and technique?

“We have a tendency in this country to copy the latest fad. But our characteristics are high-tempo, positive, front foot, never-say-die, battling.”

Hopefully you’ll have an idea of your own club’s DNA. It will probably be defined by factors such as history, location, fanbase, former players, youth policy and style of play. For some clubs - those for whom the ownership and management have changed on a regular basis - this might not be so clear.

As part of the Premier League's Elite Player Performance Plan, clubs are required to formulate a philosophy, style of play and strategy for their Academies. This should be allied to the philosophy of the club as a whole.

Aston Villa are perhaps the only club in the country to have a Head of Culture. This is a role Tom Bates combines with that of Head of Performance Psychology.

He helped develop the club's DNA, along with “senior management, heads of department and players”, and it is “ultimately driven by the manager himself and carried out by his coaching staff.”

Bates says that, above all else, the DNA provides clarity, so the club can be "as clear as possible about what they are seeking to achieve and how they are looking to play."

“That is a catalyst for confidence," he added. "The clearer the players are about what is expected of them – their jobs, their roles, their responsibilities – the more confident they can be in delivering that job description to the team.”

However, Bates will not tell me what Villa's DNA is - and it isn't published anywhere either. This is at odds with the approach of the FA, who have an England DNA section on their website, but in line with most other clubs.

It's frustrating because, as Sturgess says, the DNA can be something for the fans to understand and get behind too.

“We went to the performance centre in Largs with all the coaches and sports science department and thrashed it out,” manager Graeme Murty told TGG.

“We changed our terminology, our curriculum, our principles and sub principles, and made sure it all fitted together. We’ve got something we are quite proud of, but it’s always evolving.”

"All Rangers teams will be prepared to defend and maintain our culture of playing relentlessly attacking football. Teams will demonstrate our exciting and dynamic brand of purposeful possession-based football with the highest level of technical ability and creativity. This will be married to an intense high-energy pressing game designed to prepare our players to excel in the four moments of the game, winning for Rangers in the SPL and in Europe."

Perhaps more clubs can allow fans to play a part in formulating the philosophy too.

After all, this is a process aimed at defining the core of the club: something sustainable, which you can hold onto, rather than the short-term fix of immediate results, signings and sackings.