Why are English managers an endangered species in the EPL?

ENGLAND'S top-flight managers form a league of nations, as you can see from the assortment of flags in the table below.

Twelve countries are represented, from Chile to Serbia, and English bosses make up just 20% of the total. If you look at the other four major European leagues, it's rather more... homogenous.

In Italy, a country that's fiercely proud of its coaching traditions, there is just one foreign manager in Serie A - Spain's Julio Velázquez at Udinese.

In Spain's La Liga, there are five foreign bosses, all of them Argentine. Germany's tally is five and in France it's six.

For Frank Clark, the vice chairman of the League Managers Association and the man who led Nottingham Forest to third place in the Premier League in 1994/5, the situation is "a major worry".

"I have a lot of sympathy for young English coaches today," he told TGG. "They must look and think 'what have I got to do to get a chance?'

"There aren’t easy solutions. There are plenty of soundbites but it’s a complicated scenario. What I do know is that no matter how good you are, you need an opportunity."

Clark says the Premier League has two characteristics that count against homegrown managers - it's rich and it's foreign-owned.

Thirteen of the 20 Premier League owners come from overseas, a far higher proportion than in the other top European leagues. In Italy, five of the Serie A clubs have foreign owners - AC Milan, Bologna, Inter Milan, Parma and Roma. In France, the figure is six - Lille, Marseille, Monaco, Nantes, Nice and PSG.

Statistically, British owners are more likely to choose British and Irish managers. If we look in the Premier League at the moment, Brighton have Chris Hughton, Burnley have Sean Dyche and Crystal Palace are led by Roy Hodgson.

The wealth of the league also means owners are able to appoint the most high-profile coaches in world football.

"The best coaches are working in the Premier League," Clark admitted. "You've got Guardiola, Klopp, Mourinho, Pochettino. The competition to get a managerial job is incredible, because you're up against the very best in the world."

But he added: "There is this misconception about English coaches, that they're not as good or as glamorous as the ones from overseas. That might be the case at the very top, with the names I've mentioned, but it isn't necessarily as you go further down.

"It's almost got to the stage where a British manager has to get a club promoted to get a chance in the Premier League. We've seen that with Eddie Howe, Sean Dyche."

As we wrote in April, there are five German managers in their thirties in the Bundesliga. Each was handed a debut in the top flight and all but one was promoted from within, having worked with the club's Academy.

That pathway doesn't seem to exist in England.

Norwich appointed Borussia Dortmund B manager Daniel Farke last year and Sporting Director Stuart Webber argued that coaching in German reserve football had been better preparation than working in England's Premier League 2 would have been.

“What a lot of people might not realise is that Dortmund 2 play in a senior league – they don’t play in an Under-23s league in front of 200 people," Webber told TGG.

“There are times when they will have 10,000 to 15,000 fans at certain games. So they’re essentially a first team playing in a league, but with predominantly Under-23s in their side.”

He also said it was easier to appoint a rookie coach in Germany than it was in England, because all the top teams had a Sporting Director who could both help and shield them. 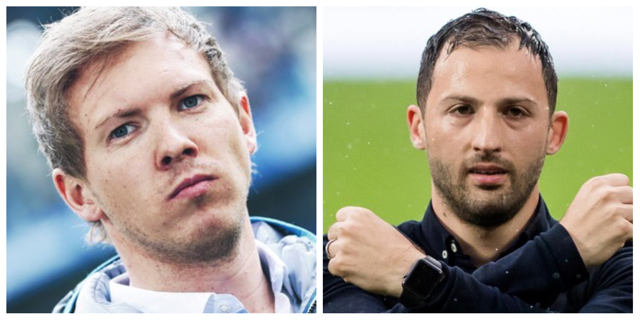 "The Sporting Director can create a safe environment for a youth coach to come into."

In Germany, they talk about the 'Nagelsmann effect’ - the knock-on effect that Julian Nagelsmann's success at Hoffenheim has had for other young homegrown managers.

The German was appointed in February 2016 at the age of just 28. He saved them from relegation in his first season before taking them to a Champions League place in his second.

Domenico Tedesco took Schalke to second in the Bundesliga last season; the success of Jurgen Klopp and then Thomas Tuchel at Dortmund is well-documented.

In England, it's harder to find those real title-challenging success stories and Clark said: "It's become virtually impossible for an English manager to get a chance with a top-six club, one of the ones that has a real chance of winning things."

Harry Redknapp was the last English manager to finish in the top four in the Premier League, in 2011/12. Bobby Robson was the last to finish in the top three, in 2002/3, and you have to go all the way back to 1995/6 for the last time an English manager genuinely challenged for the Premier League title, when Kevin Keegan's Newcastle were pipped by Manchester United in a thrilling run-in.

The last English manager to win the title was Howard Wilkinson with Leeds United way back in 1991/2. Since the launch of the Premier League the following season (when all the managers were from UK and Ireland) there has been a gradual takeover of the top jobs by foreign bosses.

Clark was assistant at Sunderland before becoming manager and then managing director at Leyton Orient. The chance to manage Forest, the double European champions who had fallen on hard times, came "out of the blue" in 1993.

He took them up in his first season in charge before finishing third in the top flight the following season, with Stan Collymore, Stuart Pearce, Lars Bohinen and Bryan Roy to the fore.

His advice to aspiring English managers is to "get all the qualifications you can, learn as much as you possibly can and keep working and building up your CV. Do so well that your abilities shout from the rooftops."

But he added "it's certainly a lot, lot harder than it was when I was setting out."