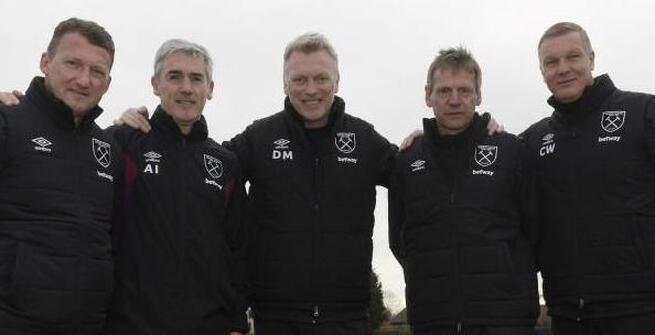 WEST HAM manager David Moyes says he hopes to appoint a new fitness coach ‘within the next few weeks’.

The previous incumbent, Miljenko Rak, was sacked along with former boss Slaven Bilic on November 6th.

“I’m happy that we have our coaching staff in place,” Moyes said. “We’re still looking for a fitness coach and I hope we can appoint someone in the next few weeks. As it is, we have three assistant coaches, Alan Irvine, Billy McKinlay and Stuart Pearce."

West Ham’s fitness has been the source of much debate and their stats certainly don’t look good, no matter which metric you choose.

Bilic downplayed the stats when they were put to him at the start of the month.

“I have all these statistics and more,” he said. “They are not the best but in two of the games we had players sent off in the first half and that changes things a lot.

“The inference from the stats is that the players are not fit enough but I don’t see us being over-run. We certainly finished strongly against Spurs and worked hard at Palace. Against Brighton, after the third goal, we quit a little because the game was over.

“We are not flying and the stats don’t lie but they don’t tell you everything.”

Former England physio Gary Lewin was appointed Head of Medical Services by the club in the summer, replacing Stijn Vandenbroucke, who left to “take up a new challenge”.

Ben Dinnery from Premier Injuries, who provided the injury stats above, told TGG: "Overall, West Ham are faring considerably better in terms of injuries than they did 12 months ago, due in part to the fact they have no European football.

"Their performance, in terms of injuries, from the last few seasons may well have influenced the decision to appoint Gary Lewin as Head of Medical Services."

Rak, 70, certainly had an interesting back story. He was a former professional long jumper who coached both the Croatian handball team and skier Janica Costelic to Olympic gold before working with Bilic for Croatia, CSKA Moscow, Besiktas and West Ham.