OVER the course of the last decade, the Performance Management Application (PMA) has become a goldmine of performance and wellbeing data for Academies.

The platform was introduced as part of EPPP and staff and players use it to record a range of data. However, as former Premier League Director of Youth Ged Roddy told TGG, there is still much more than can be done to utilise this.

“We established the PMA as a sort of repository for data," Roddy said. "Ten years on it is a resource that is rich in data but largely untapped.”

Kitman Labs are addressing this using their powerful data analytics capabilities. In January 2020, the Irish firm acquired Sports Office - the company behind the PMA - and are gaining rich insights from the wealth of Academy data.

At our recent Individual Development Webinar, Kitman Labs' Darcy Norman and Michael Bridges outlined one particular piece of analysis the company had worked on with a Premier League club's Category One Academy.

Graduation rates between the age groups were analysed, as were the factors that had influenced them. Performance Strategist Bridges will be discussing this work further in a Twitter Space at 19:00 BST tonight, along with Data Scientist Jakim Berndsen. You can join HERE.

TWITTER SPACE: How to use analytics in your Academy - join here

Darcy Norman: For most of us, the 300 million dollar end game in sport science is being able to ask questions of your data and give answers to improve your process, build better athletes and improve player development.

Michael Bridges: The EPPP is 10 years old now and in my previous role at the Premier League I was heavily involved in that. The Premier League are currently doing a wide-ranging review around the impact EPPP has had across the pyramid and a major part of that is the use of data for player development. This is not just a historical piece, but will allow for some insights into what is possible in future.

One of the things we looked at with this particular Academy we worked with was the drop-out rates. 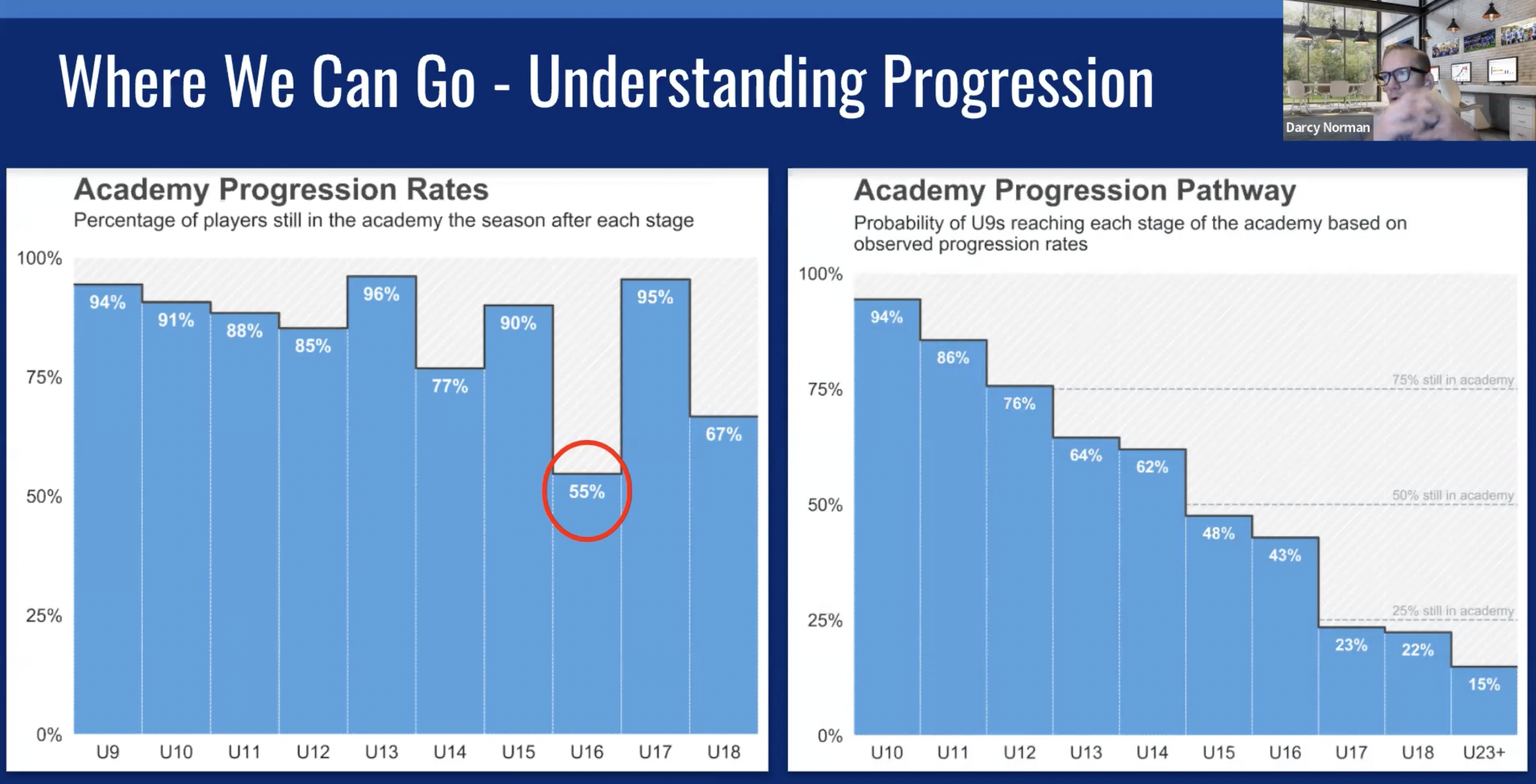 Darcy Norman: As you can see, at the Under-16s level there was this significant drop-out, because this is when clubs start offering scholarships. After understanding the attrition rates, we then wanted to ask, 'How do you get from that U10 level to eventually signing a pro contract?'

So we started to look at the different pieces of how kids move through the club. As you can see, for every 100 kids at U23 level, 15 were signing pro contracts on average. We also looked at all the factors that influenced progression from one age group to another and the relationships between these different metrics.

Michael Bridges: These metrics illuminated some of my own personal experiences as a coach. I can remember one young player I worked with in the U14s at Brighton (where Bridges was Youth Development Phase Lead). I thought we were doing a really good job in terms of his development and the areas he was working on.

I then sat in on the U18s professional contract conversations and it was eye-opening for me. They had a very similar player to this U14 in the U18s and although he was doing well, they decided he wasn’t going to be able to go on and have a professional career with the club, so they didn’t offer him a contract. 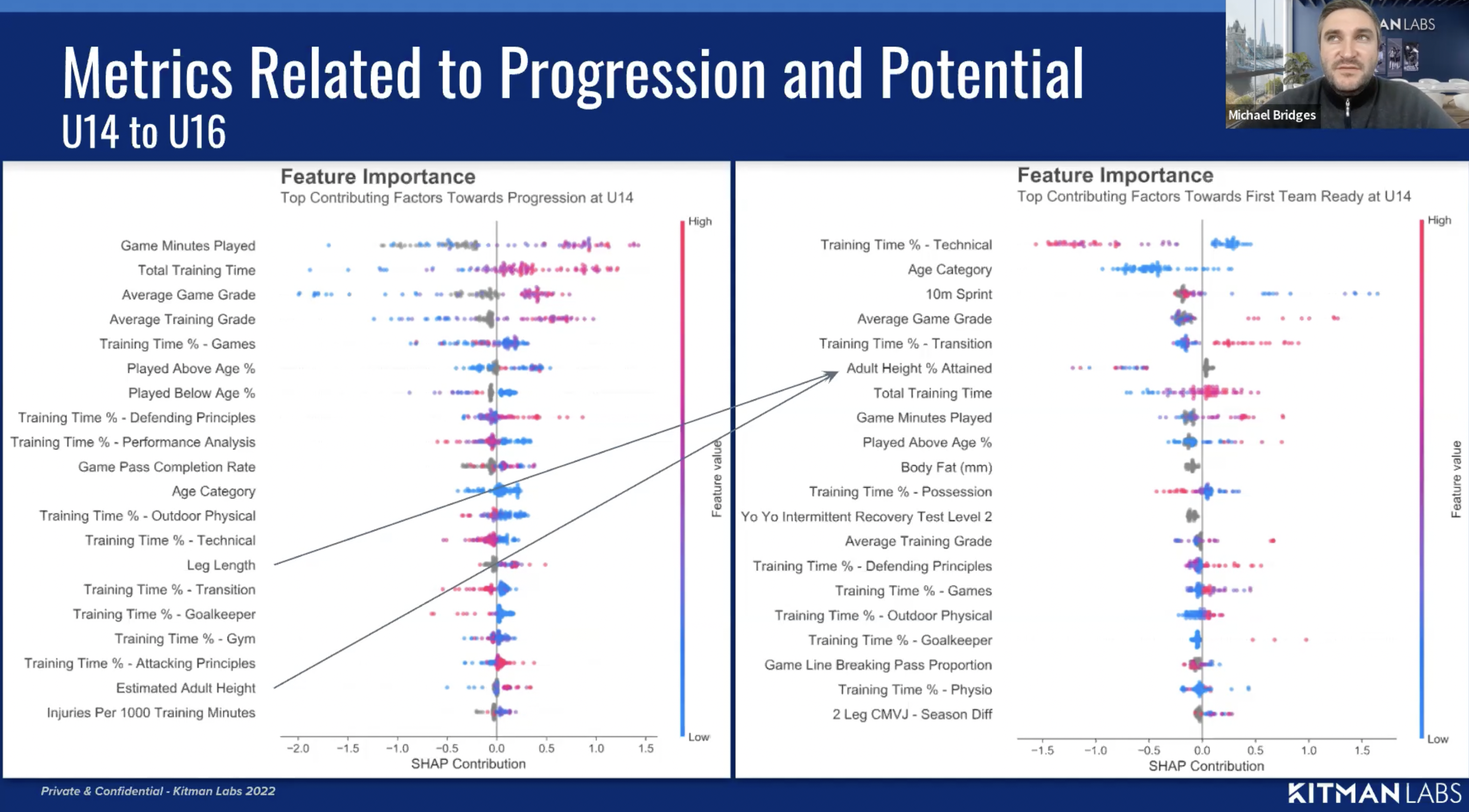 I thought, ‘We’re doing things to help make those small steps from 14 to 15 to 16 for this player, but what are we doing to help him in the longer term to have a pro career? How do we help him make the big step to having a pro career?’

We really had to start pushing some of the physical elements with this player, to be able to go box to box a little more, rather than sitting in front of the back four, and dial back on the tactical-technical areas that he was already very strong in. That was a big learning curve and moment. Were we giving him the best opportunity to progress in his career?

These types of insights, on contributing factors towards being first-team ready at 14 (above right), would have been very useful to me.

Darcy Norman: We were able to to dig in and see how each factor affected graduation and what the optimal ranges were for each. We looked at data consistency, validity, different ways to look at the timelines.

Michael Bridges: I can also remember a centre-forward I had worked with, who was scoring a lot of goals in his own age group and the natural instinct was to push him up an age group.

But what we found - and it was more through reflection as he went on his pathway - was that we created unintended consequences. In the older age group he began to only score with his stronger foot, because he maybe wasn’t quick enough to get away from the defender any more and he didn’t develop those things in his game.

So maybe he needed to play more in his own age group, to practice scoring with his weaker foot, finishing from the edge of the area and becoming more of an all-rounder.

Darcy Norman: Those unintended consequences are really interesting. From that we were able to create this Graduation Model Scorecard (below) for the club to guide their decision making and align the Academy on what was important to them. 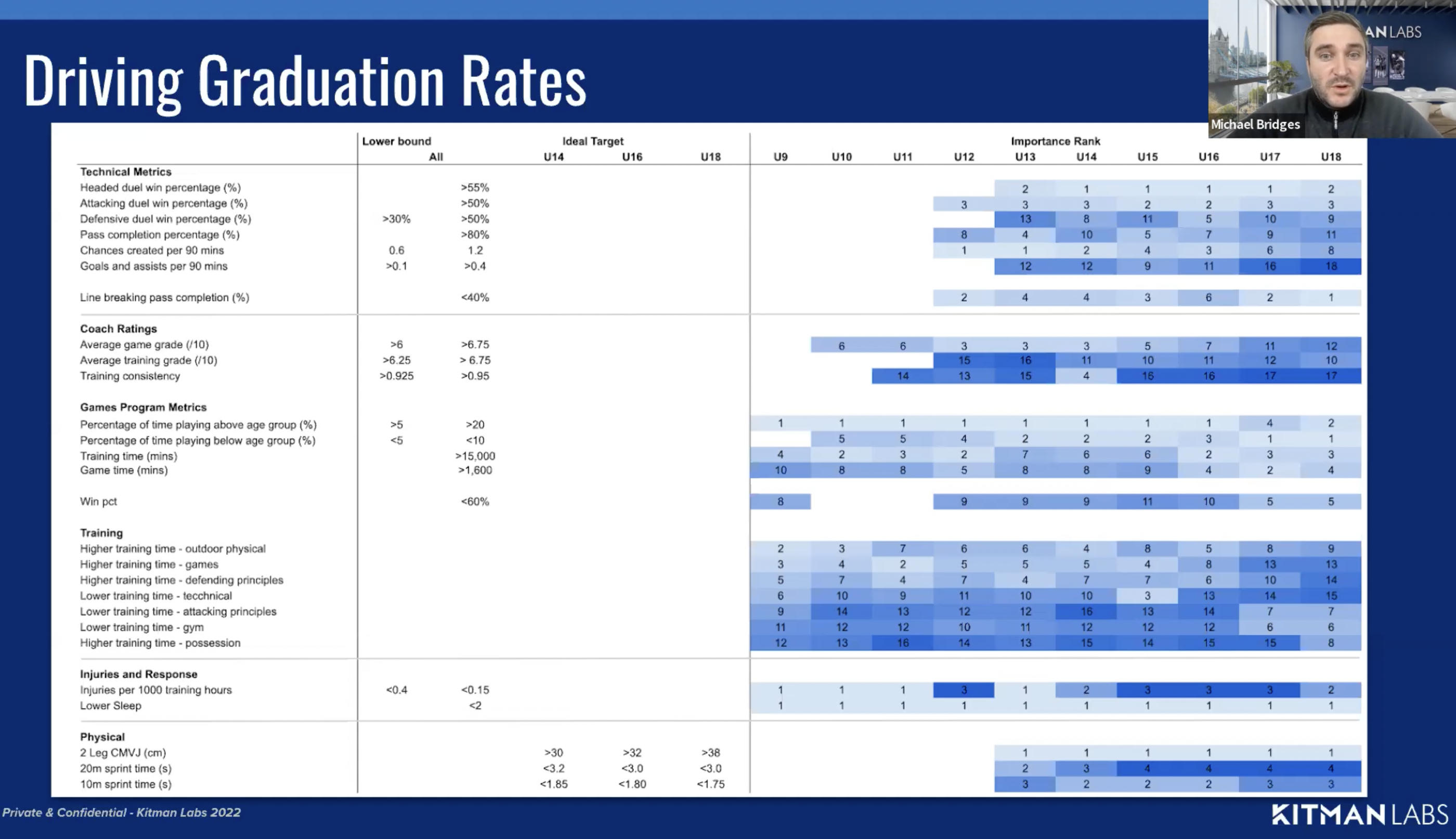 Looking at what are the most important factors in each age group and how this changes over time. How should we use this information to influence the training focus, the development of planning, syllabus design and to benchmark and evaluate players, and better educate coaches and staff and ultimately how to increase the graduation rates and develop players.