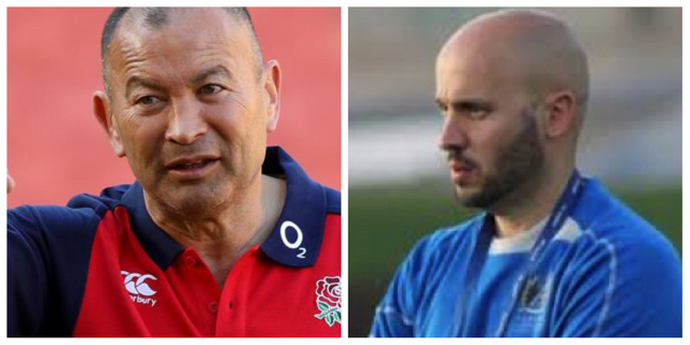 Jones (left) has described Villanueva as a 'brilliant guy'

"I read a lot about it and went down to Aspire. There’s a Spanish guy there, Alberto Mendez-Villanueva, who is absolutely brilliant and helped me a lot in understanding Tactical Periodisation." (Eddie Jones, September 2017).

Alberto Mendez-Villanueva: The concept of Tactical Periodisation was created many, years ago by Vitor Frade, a Portuguese guy working at the University of Porto. He is the father of the concept, the mastermind; a brilliant guy and person. He is the one who has to be credited.

About 12 years ago I started to get interested in the concept, reading about it and talking to people, and met my mate here in Qatar, a Spanish guy Juan Luis Delgado. He was the one who truly explained the whole thing to me. I started to work with him here at Aspire, trying to apply the principles of the methodology.

We started to pilot Tactical Periodisation at Aspire with our under-age groups and are now trying to use bits and pieces with the national teams, from the Under-17s to the seniors.

In my own experience, if this is done properly, then the fitness and level of adaptation of the players is superior to more isolated training. You will be more sure that the fitness provided to the players will transfer better and more directly to a game. This is an opinion based on own experience. 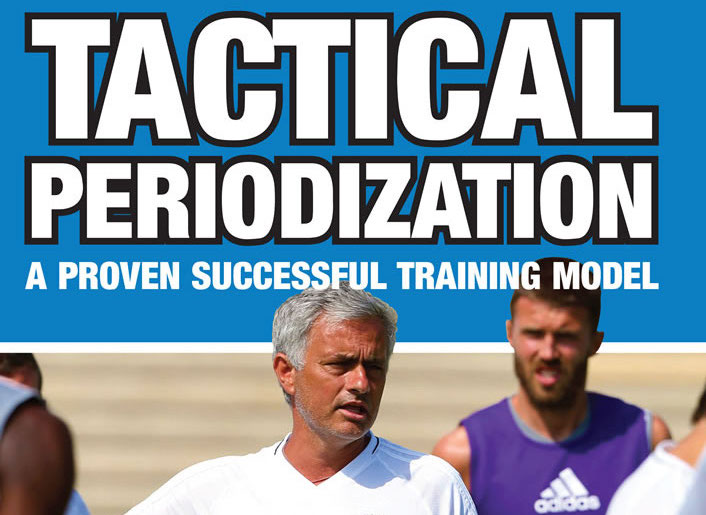 You start with a tactical target and design drills that really, really target the physical factors you want on a specific day. You will get every fitness component by implementing football drills. 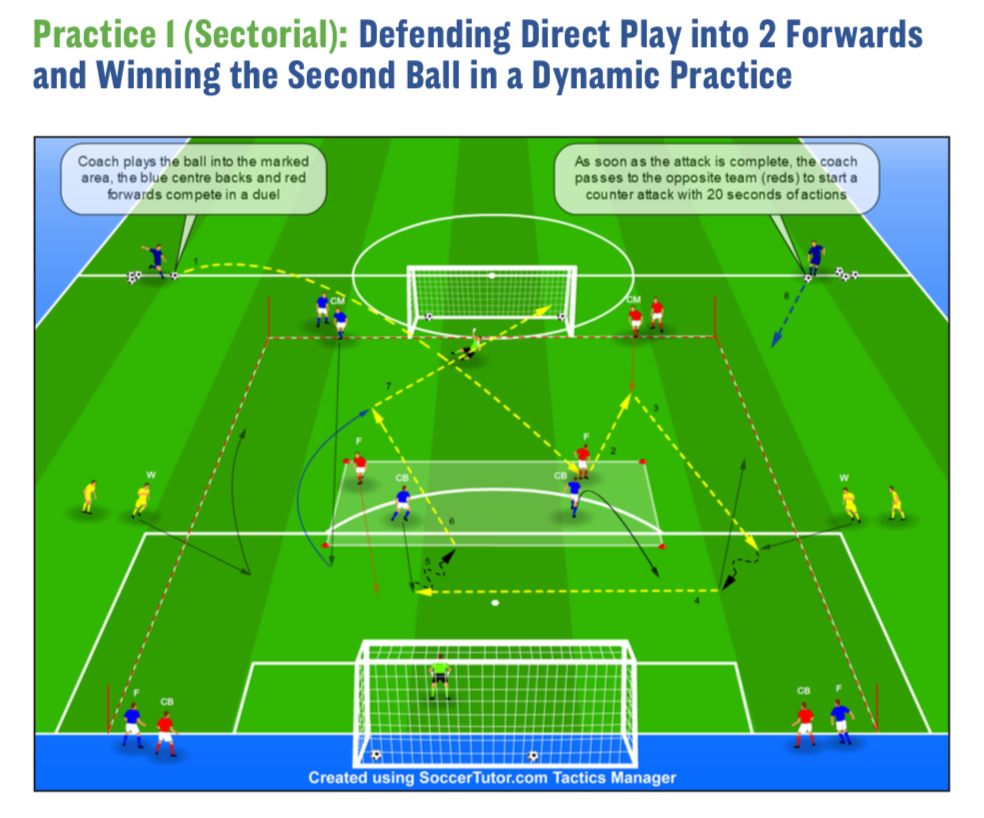 Around the week, the training contents are organised and follow a cyclical pattern, which is repeated week after week. For example day one could typically be rest, day two recovery and three is intermittent activity, with lots of rest and then intense and strength orientated.

It is clearly defined, so every day has a target in relation to the tactical and physical objectives. This is why we have the name periodisation. 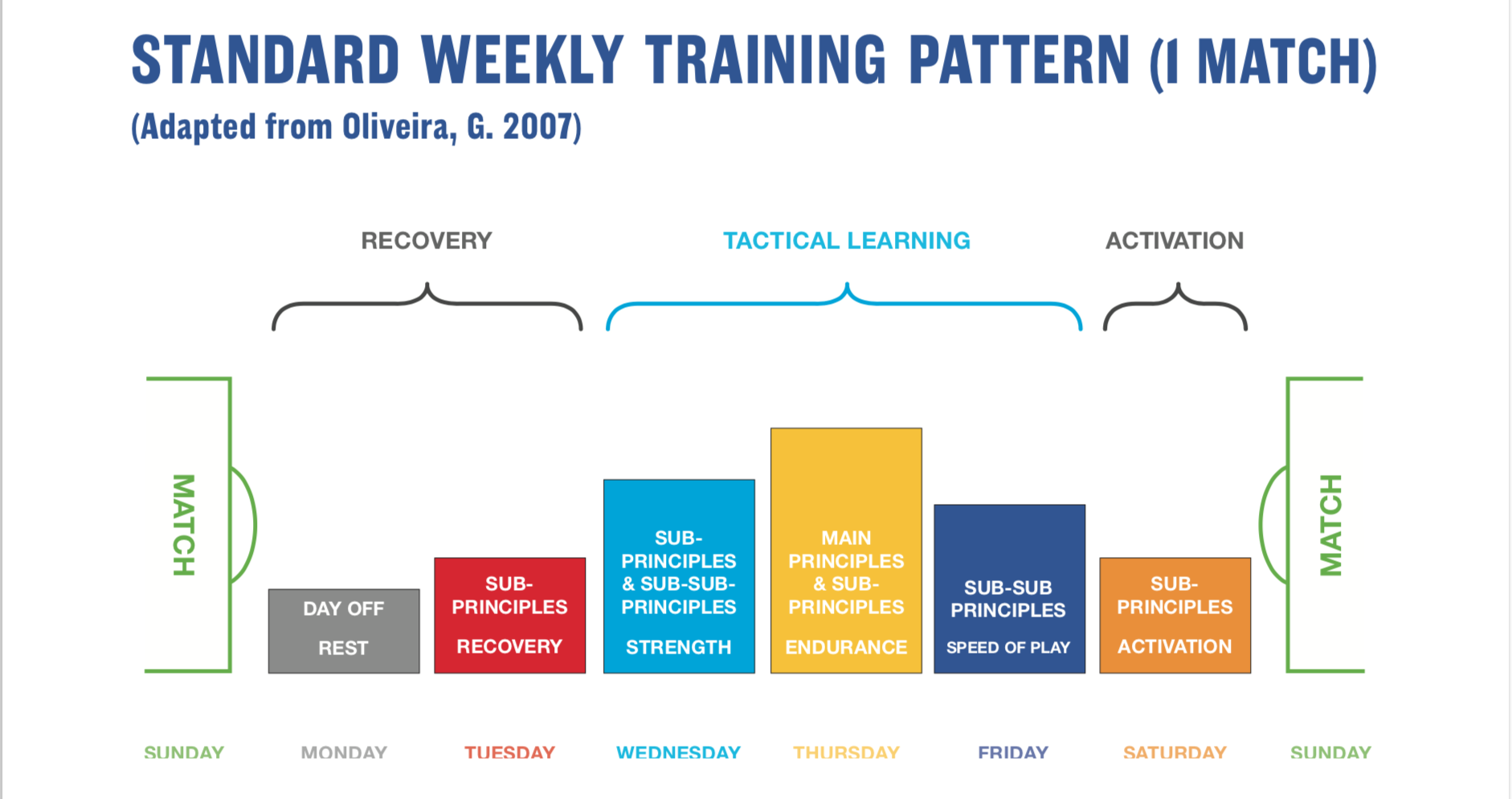 When you work with Tactical Periodisation, the separation between fitness coaches and technical coaches does not really exist.

If you don’t work together as one staff, it is virtually impossible to do something close to Tactical Periodisation, or in fact any methodology where you want to get the physical and tactical integrated.

This is why the organisation you tend to see at top clubs now is a head coach and assistant coaches. If you apply this concept, then the traditional ‘fitness coach’ doesn’t really have a place. My own title here at Aspire is football fitness coach.

You need someone who is into the coaching side too. Rui Faria [Manchester United assistant] is a good example. He has a degree in sports science and is a very capable person to do the fitness side, for sure; but he also has the Uefa Pro Licence and is a very highly-qualified coach.

This is not to say you can’t ever do any isolated work. That is the milk you put in the coffee, as Frade would put it. You can compensate for any potential lack of football stumuli with something more isolated.

I haven’t seen Mourinho training before, but of course he is the best example of the way to apply Tactical Periodisation to a very high-level team. He is the reference, both with his teams and his training sessions.

Whether or not they use the whole concept of trying to organise all of the training around football actions and what happens in football, all of the top coaches will be applying something similar to a global methodology.

I first had contact with a fitness coach of Eddie’s. We met in Spain then in Australia a few times. Then Eddie himself came out to meet me here in Qatar. I'd started to do some research and realised how big he was in rugby, so it was humbling that he wanted to come and speak to me.

We spent the morning talking about training concepts. He didn’t care that I didn’t really understand about rugby, the rules and so on, he was just happy to talk about concepts. I think he understood really well the whole thing about Tactical Periodisation.

A lot of rugby guys are becoming interested in the concept and I often get emails from people asking to talk to me about it.

[After England's summer tour of Argentina, Jones said: "We went to Argentina and had 28 senior players unavailable and five weeks to prepare them to the last game. In the first week of training we got something like 14% of accelerations at training, which is far too low. By the last week we got 40% and it was all by doing it through the game, none of it through acceleration work."]

I have now written the first book in English about Tactical Periodisation, with Juan Bordonau. It's called Tactical Periodization: A Proven Successful Training Model. It's an in-depth manual which will teach you how to train your players to the correct intensity for each day of the week, so they are prepared tactically, mentally and physically for matches.