Tactical lessons from the World Cup

FRANCE went against footballing fashion to win the 2018 World Cup.

Pep Guardiola might have become the high priest of football tactics, preaching possession, pressing and risk-taking, but, as the newly-released Fifa Technical Report shows, France followed a different path to claim the trophy in Russia.

Didier Deschamps' men were all about compactness, counter-attacking and set pieces, which became themes of the tournament as a whole.

We looked at some of the tactical take-homes from the tournament with David Adams, the former Middlesbrough first-team coach and Swansea Head of Coaching, who is now a consultant for the Football Association of Wales.

“Total football is in vogue now, but football is about adopting a style suited to the profile of your players," Adams told TGG. "There's more than one way to do this. Leicester won the Premier League based on counter attacks and a solid shape and France essentially did the same in Russia."

Possession is one of the keystones of Guardiola's football philosophy.

“I could defend more deep, but I want to have the ball and I want to play,” he has said.

Possession wasn't really that important for France at the World Cup though, because they actually had less of the ball than their opponents on average during their seven matches.

They had the ball 48% of the time, which put them 20th in the possession stats. Top of the charts, with 69%, were Spain, who exited ignominiously in the last 16.

Instead, France adopted a counter-attacking style, which made sense when you look at the players at their disposal.

"France did not rely on possession, but rather focused on getting the ball into the opponent's half as fast as they could," the report states.

“They had players who could counter attack at speed," Adams adds. "Antoinne Griezman plays this style to great effect at Atletico and Kylian Mbappe is phenomenally fast.” 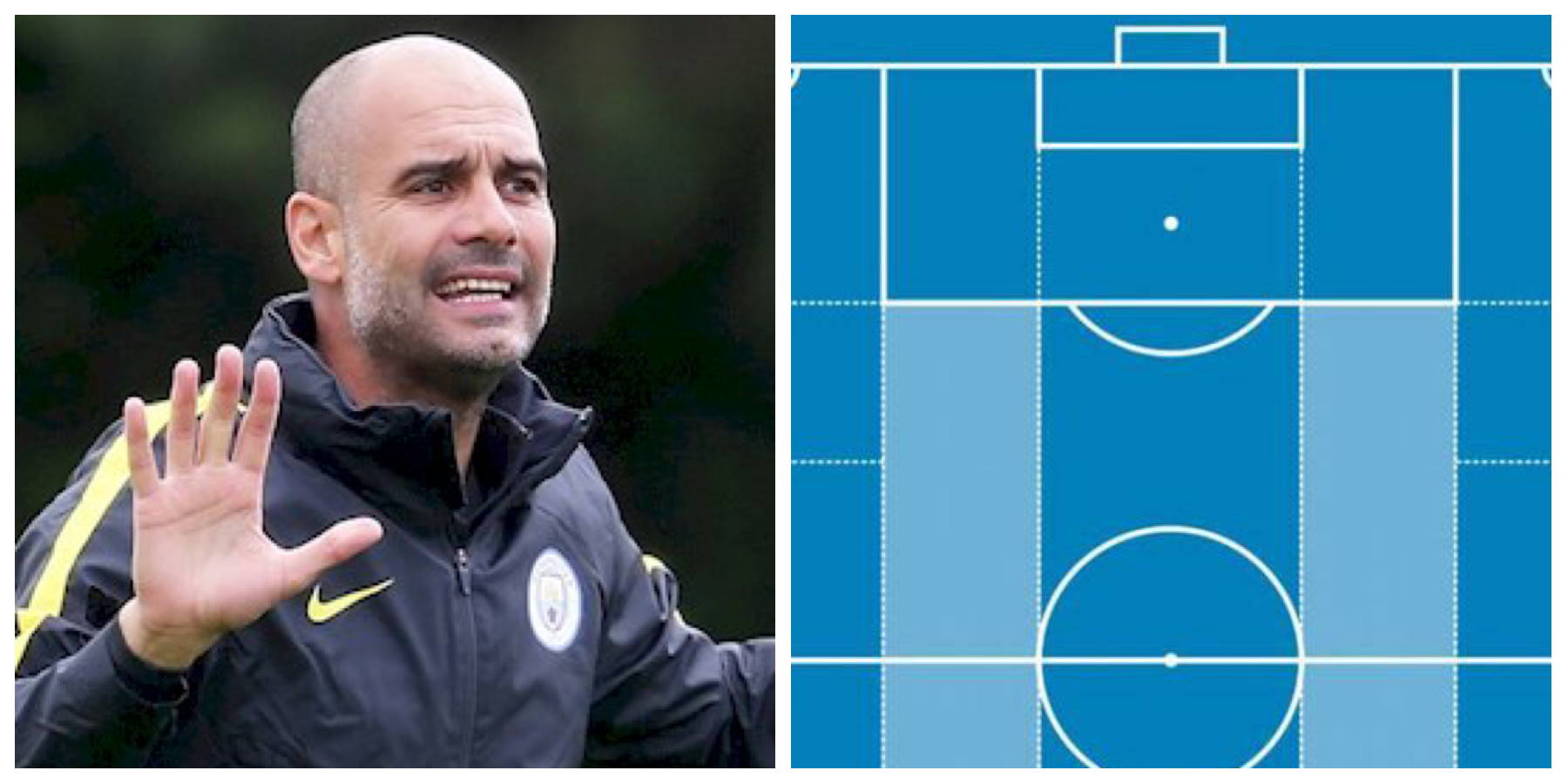 They were also clinical in their finishing, with an average of six shots per goal, bettered only by Russia, with 4.5, and much better than the average of 9.8 for the tournament overall.

Counter-attacking was one of the themes of the World Cup, with one in every two goals coming either on the counter or from a set piece (a subject we'll come to later).

As Adams says, Leicester won the Premier League in 2015/16 using a counter-attacking style; Jose Mourinho "has never really been that bothered about possession"; and Jurgen Klopp, at Liverpool, "leaves his front three high, so they can counter-attack against a back two when the opposition full backs have pushed forward".

"When you lose the ball is still when you're most vulnerable in football," he adds, "because it's when you’re not set and gaps appear."

As former World Cup-winning coach Carlos Alberto Parreira, one of the members of Fifa's Technical Study Group, said: "Space between the lines was practically non-existent at this World Cup.”

Teams were more compact than at previous tournaments, with an average of 26 metres between their deepest defender and highest attacker out of possession. There was a 32% reduction in the space between the lines compared to 2010.

“The amount of space available has been dramatically reduced, making it challenging to find openings,” the Technical Report states. The average gap between the farthest player forward and the farthest player back when out of possession was 24 metres for France - smaller than any other team bar Australia and Panama.

Their average gap when in possession was the fourth smallest in the tournament, while only three teams were narrower in attack.

Out of possession, France quickly adopted a compact and shallow 4-4-1-1, limiting space between the lines and crowding the central areas, as we can see in the clip below (from the semi-final against Belgium).

Guardiola's Manchester City are different. “They use the instant press and only when the opposition are in comfortable possession will they use a medium block, with a 4-1-4-1 formation," Adams explains.

The tight, compact defending at the World Cup had a number of knock-on effects: there were less shots from outside the penalty area (32% less than at South Africa 2010); playmakers were less prevalent (Paul Pogba and Luka Modric were picked out in the Technical Report, but often operated from deeper areas) and number nines struggled (Harry Kane won the Golden Boot, but three of his six goals were penalties and another was from a corner).

The image below shows France's compact defensive block against Belgium in the semi-final. As you can see, they didn't mind ceding space out wide. 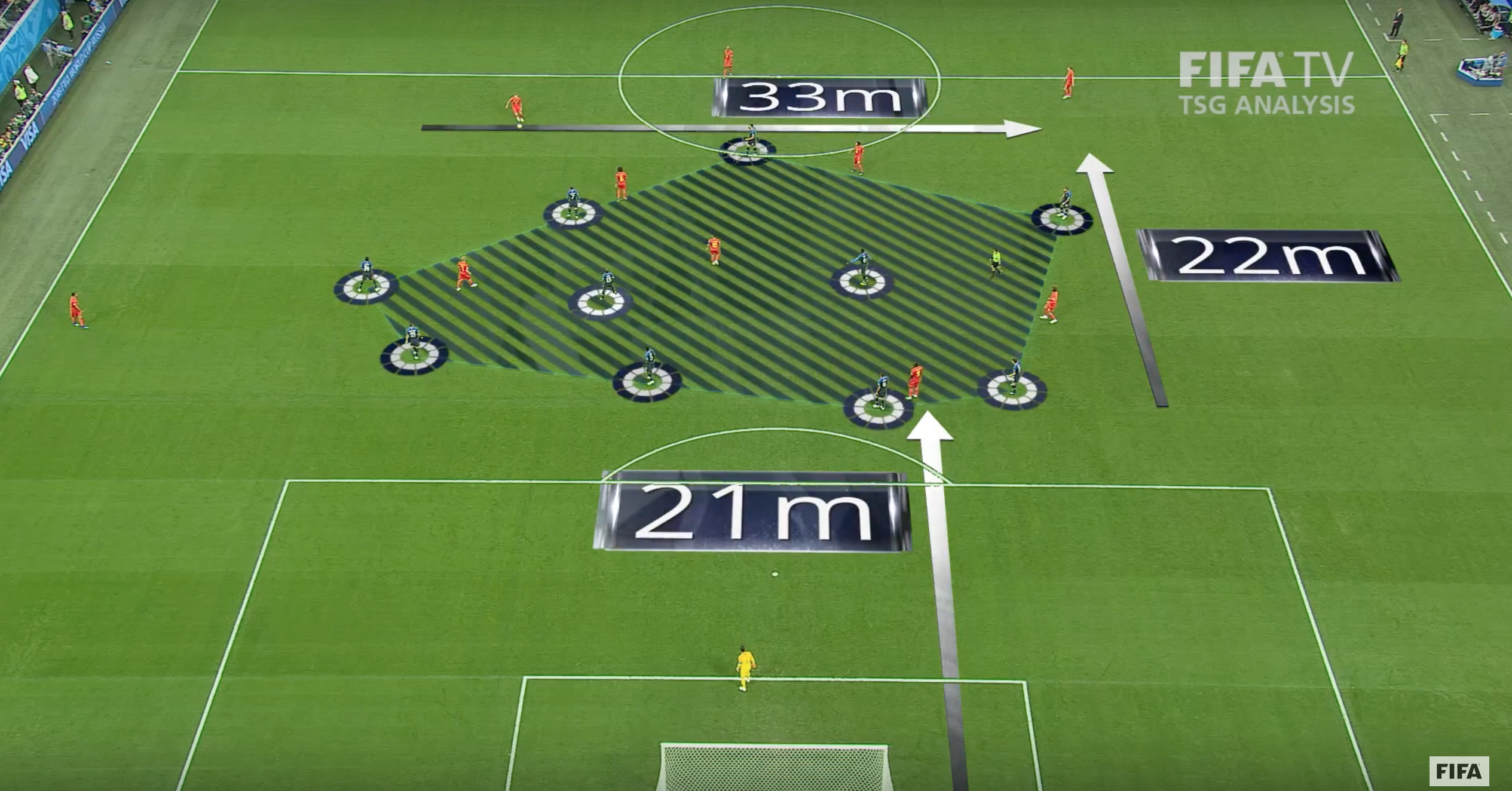 “Most teams will show outside, away from goal,” Adams explains. “In the past, teams didn’t like doing that, because it opened up the possibility of a cross into the box.

“Now that's seen as the lesser of two evils, because teams would rather defend a deep cross than a slip pass through the middle.”

“The top teams don’t really use deep crosses any more," says Adams, "because they’re relatively easy to defend. Manchester City do score from crosses, but they tend to be precise ones cut back from the byline, coming in behind the defenders, which are much more difficult to defend.”

With teams often playing a compact, counter-attacking style and with chances at a premium, set pieces became more important than ever. Five of France’s 14 goals came this way and teams were much more effective at set plays than at previous tournaments.

Perreira said set pieces are "a special situation, because you can push as many players as you want into the box and practise routines beforehand," while Marco Van Basten, a colleague on the Technical Study Group, added, "If I think back to my playing days, we didn’t spend a lot of time working on set pieces in training – maybe five or 10 minutes. Today, more attention is being paid to these things.”

Adams says another major reason for the potency from set pieces was the introduction of VAR. Twenty-four penalties were awarded in the group stage in Russia - six times more than at an entire tournament before - as referees cracked down on infringements inside the area, confident that VAR would either back them up or overturn the decision.

“Everyone uses blocks when they defend set pieces and this has traditionally been both very effective and difficult for the referees to pick up,” Adams said. "But with VAR, you have to be very careful about doing that, because it can be picked up and penalised.”