WHEN the Elite Player Performance Plan (EPPP) was unveiled in 2011, there was opposition in many quarters - including in the stands at Selhurst Park.

A banner (which you can see below) was unfurled in the Holmesdale Road Stand which read, “The death of Academies - no to EPPP.”

Speaking at TGG’s recent Youth Development Webinar, Ged Roddy MBE, who was Director of Youth at the Premier League and the architect of EPPP, remembered the slogan.

“This is the stands at Crystal Palace, this is how it (EPPP) started in many respects - with a robust debate and a lot of fear about some of the changes that were being proposed,” he said.

“It wasn’t plain sailing. There were some massive challenges to convince people of the benefits of the proposals.”

Palace chairman Steve Parish was a critic of the plans as well, saying in November 2011: "There's a lot that's good about the EPPP but there's too much compromise in the current proposals to appease the top clubs."

What a difference a decade makes. Fast forward 10 years and Palace have turned out to be enthusiastic advocates of EPPP. In July 2020, the Eagles were promoted to coveted Category One Academy status. And in October 2021 England manager Gareth Southgate - one of the most famous graduates of Palace's Academy - unveiled a £20m upgrade of their youth facilities on Copers Cope Road in Beckenham.

Roddy was one of those present at the ribbon-cutting ceremony and said: “I was lucky enough to visit Crystal Palace for the opening of their new facilities and to see the journey that particular club has been on over the last 10 years - a great example of how this system has evolved over time.”

The Eagles hope to better tap into the diamond mine of talent at their doorstep with the recent developments, and for a steady stream of stars to be developed in-house.

In a 2016 article, The Guardian detailed how 14% of the English players in the Premier League at the time hailed from within a 10-square-mile patch of south London, with Croydon, where Palace are based, bordering one corner and Orpington, Woolwich and Lambeth the other three.

The borough of Croydon alone was said to have produced 5% of all English Premier League players – including Palace Academy graduates Wilfried Zaha and Aaron Wan-Bissaka. 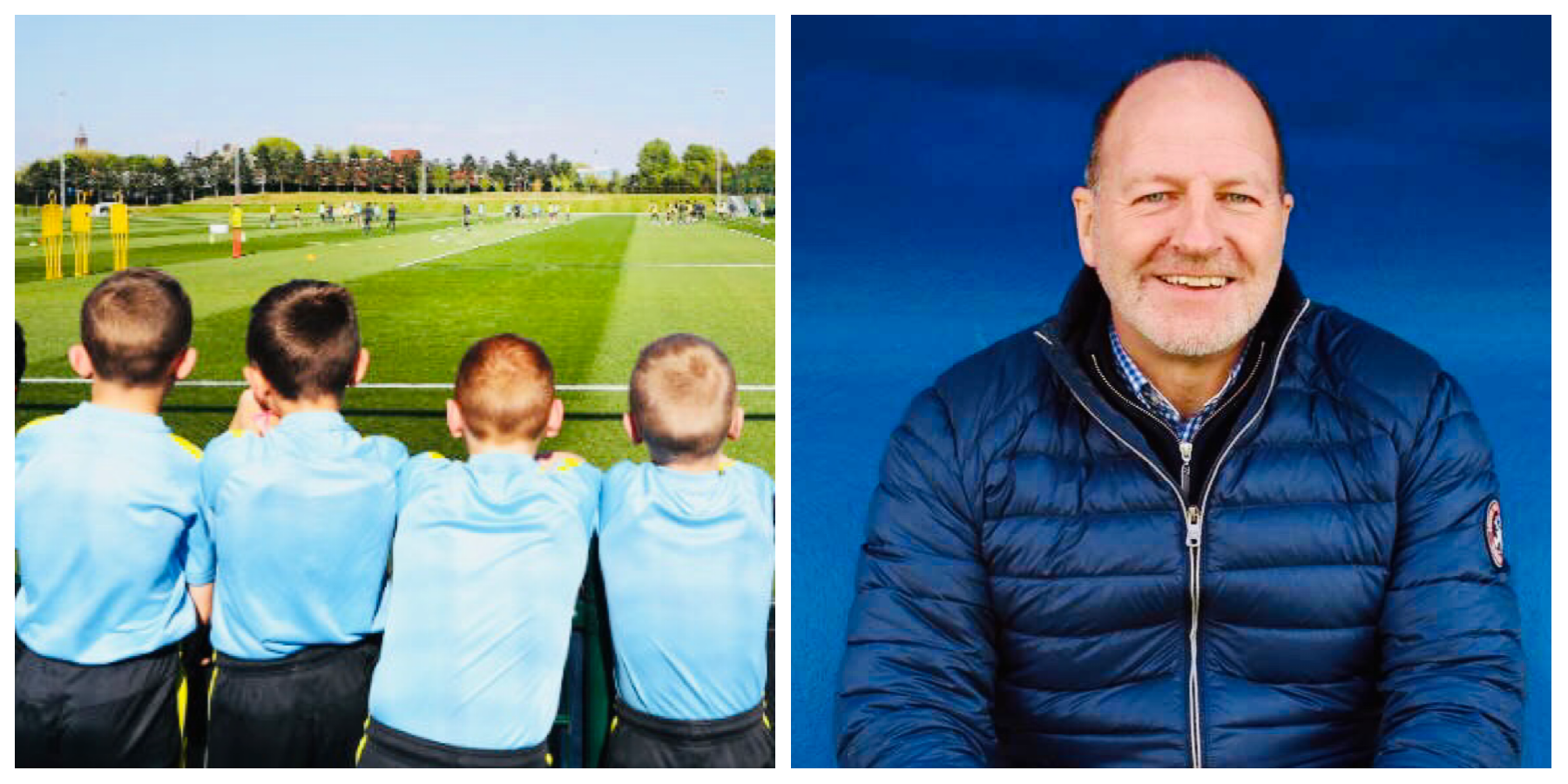 In February 2019, while researching my book The Dream Factory: Inside the Make-or-Break World of Football’s Academies, I visited Palace’s Academy while the club were in the midst of levelling up their youth programme.

The award of the higher licence enables them to cast their recruitment net nationwide. When graded at Category Two level, which they had been since the inception of EPPP in 2011, Palace’s recruitment of players aged under 16 was restricted to a catchment area with a radius stretching an hour-and-a-half’s driving time outwards from the Academy site.

They were free to target players aged 16 or over from anywhere in the country, but, almost without exception, the best talents have long since been snapped up by that stage.

Despite this newly-earned advantage, though, Palace intend for the great majority of their youth recruitment to remain local – understandably so, when they’re situated within a hotbed comparable with the Parisian suburbs for its richness in football talent.

A red-and-blue hording that surrounded the Academy pitches spelled it out succinctly: SOUTH LONDON AND PROUD. But, as long-standing Academy Manager Gary Issott explained when I interviewed him for my book, Palace’s location is both a gift and a curse when it comes to recruitment.

“If you’re in a one-club city, you’ve almost got the pick of the players first,” he told me. “Of course, we’ve got a good catchment area, well populated. But we’ve got 14 professional clubs in London.

“With EPPP, everyone’s recruiting better – the rules have dictated that – and it’s fierce. The North West, they’ve got eighteen clubs up there. Us and the North West, where it’s very well populated, there’s nothing like it. And we’ve got three Champions League clubs – Chelsea, Arsenal and Tottenham.”

Despite the local competition for talent, Palace, who ranked 19th in TGG's recent Academy Productivity Rankings, have held their own over the last decade, producing a number of players who have broken through to the first team and gone on to command hefty transfer fees when sold elsewhere.

The sales of Zaha and Wan-Bissaka alone, who were both sold to Manchester United, with the former later returning to Palace, have recouped around £60m for the club.

One of the biggest challenges of Issott’s role is not one that’s unique to him or indeed football, but is faced by anyone working with large groups of young people from a variety of backgrounds.

More than most Academies, though, Palace’s location and catchment area sees them draw from a broad range of cultures. For instance, lunchtime during my visit brought together Under-18s striker Will Donkin – an Oxford-born, Eton-educated Chinese Taipei international signed from Chelsea – and U23s defender Ryan Inniss, who hailed from nearby Penge and, through the drug dependency and imprisonment of his parents, had to take a lead role in raising two younger siblings as a teenager. Inniss has had several off-field troubles, including a 2015 conviction for assault.

Managing, safeguarding and encouraging young people from diverse and disparate backgrounds requires a careful and empathetic approach from coaches and management alike.

“For me, personally, coming from leafy Bedfordshire to here at 27, it took me 18 months to two years to skillset myself to deal with all these different issues,” Issott admitted.

“I had to really educate myself and understand that there’s a reason for every behaviour and trace it back to where that behaviour was learned, tap into the players’ mindsets.

“Team spirit is fine but it’s managing individuals, keeping individuals on a straight line and not allowing them to self-destruct. And understanding why some days they might come in and they might be low, because not all of them have got perfect backgrounds in London.

“Some of our players live below the poverty line in the schoolboy age groups. I remember one player was consistently late. My first instinct is to punish the player. When you trace it back, he was coming from a cultural community where the children do the jobs in the house, and his dad wasn’t allowing him to leave the house until he’d completed all his tasks after school.

“You experience all these things. It makes you broader and wiser and more empathetic. Rather than one size fits all, you’ve got to be bigger than that.”

Palace’s plans for the Academy’s expansion were unveiled in 2019. As well as an all-weather dome and bespoke classroom facility, a new medical centre was included, plus revamped canteen space and meeting rooms, all of which are shared with the club’s girls’ Academy, which runs independently of the boys’ side Issott oversees.

Palace employed 35 full-time and 100 part-time Academy staff when they were Category Two; that number has increased by approximately 20 post-upgrade.

Although Category One status allows them to sooner cast wide their scouting net, Palace harbour no illusions about being able to compete for the best talent with the likes of Manchester City, Chelsea and Liverpool on a national scale.

Their doorstep hotspot remains their bread and butter, with, they hope, their improved facilities a greater lure to lock down the best local talent.

“Securing Category One status for our Academy is imperative for us to be competitive in attracting the very best young players, and there is an abundance of raw footballing talent in south London,” said chairman Steve Parish, prior to the club’s plans being given the green light by the Bromley council in November 2019.

No matter how many high-potential youngsters Palace are able to attract, and no matter how rich a seam South London is to mine, the brutal reality of elite youth football is that opportunities for advancement to the first team, and for long, prosperous careers in the game, will always be in short supply.

Running boys’ teams in 10 age groups between U9s and U23s, Palace have as many as 200 Academy players on their books at any one time.

Yet in the 2018/19 season, Zaha and Wan-Bissaka were the only Academy graduates to start a Premier League game for the club, with the latter becoming Palace’s first Academy player to make a full league debut in almost six years.

Issott said his primary task as Academy manager, that of progressing homegrown players into the first team, hadn’t always been easy – not all of Palace’s rotating cast of managers in recent years have had great faith in youth, nor have they always been afforded the patience from higher up to allow for youngsters to be blooded.

“We were lucky because when we got relegated and didn’t go back up the year after, and Iain [Dowie, Palace’s manager at the time] left, the parachute money and the quality of the squad lessened – Andy Johnson was sold, Fitz Hall was sold,” Issott remembered of Palace’s drop into the Championship in 2005.

“That’s when the opportunities for the young players came. In that youth team, we had Victor Moses, John Bostock, Sean Scannell, Nathaniel Clyne. All these boys got opportunities in the Championship that they probably wouldn’t have got had we stayed in the Premier League.”

Now, though, with Patrick Vieira at the helm and a new, club-wide youth-first ethos, that has changed. For many young boys in south London’s poorer communities – one in five children in Croydon live below the poverty line – Zaha and Wan-Bissaka are beacons guiding a route out of hardship, a path that runs directly through Palace’s Academy.