Red to blue: How the All Blacks perform under pressure

“No battle plan survives first contact with the enemy.” (Helmuth van Moltke, 1880)
“Everyone has a plan until they get punched in the mouth.” (Mike Tyson, 1996)

Most of us have experienced this feeling, of being in an exam or interview and feeling control is slipping away. The New Zealand All Blacks describe it as being HOT: heated, overwhelmed, tense.

In this state it’s difficult to think clearly, execute properly or make the right decisions. As overwhelming favourites to win the World Cup in 2007, that's exactly what seemed to afflict the All Blacks as they completely unraveled when caught in a French storm in the quarter-finals.

It was a familiar story, of being the best team in the world for three years but failing to deliver when it mattered most. What ensued was a period of despair, followed by reflection and then an acceptance that something had to change, especially with the 2011 World Cup being on home soil.

Which is where Gazing Performance, the experts in performing under pressure, came in.

“What the All Blacks recognised was that their mentality and ability to keep attention on performance during moments of critical pressure had suffered in the last three World Cups,” says Gazing CEO Martin Fairn. “The implication was that they had choked.”

That's a hard thing for anyone to admit, let alone the best team in the world. In 2010, All Blacks mental skills coach Gilbert Enoka set up a ‘Mental Analysis and Leadership Group’ and made Gazing’s Ceri Evans and Renzie Hanham key members.

After that there was intense work for both coaches and players, in the classroom, on the training pitch and in matches, with techniques practised and honed.

It would be easy to say ‘the rest is history’, as the All Blacks won the World Cups in 2011 and 2015 - and are favourites to do so again in 2019 - but Fairn is too modest and sensible to claim credit.

“Would I stand up and say the only reason the All Blacks won the World Cup twice in a row is because they invested in Gazing systems?” asks the former Coventry rugby player who co-founded the company in 1998. “No, because it would lack credibility.

“But there was a sustainable use of Gazing concepts in the way the All Blacks prepared and performed. There was an acknowledgement that mentality was an important cog in the performance wheel, along with the technical, physical and tactical.”

All Blacks assistant Wayne Smith said: “If you think of physical, technical and tactical as forming three legs, the stool isn’t balanced unless you have psychological strength as well."

That's exactly what Cohesive Coaching in Manchester on June 20th will be about.

Fairn will be one of the panellists, along with Brian Ashton, Tony Strudwick and Dan Micciche. In the lead-up, he told us about the work Gazing do with clients including the All Blacks, England Rugby and the Gurkhas.

This concept - "easy to say, quite easy to understand, difficult to carry out" - is “key to everything we do,” says Fairn. It was first developed by Gazing duo Evans and Hanham in 2001.

Evans, a forensic psychologist who won 56 caps for New Zealand as a footballer, knew the underpinning science, while Hanham, a graphic designer who had coached teams to Olympic level, was able to bring it to life visually.

Red head is the feeling of being tight, inhibited and anxious, whereas blue is being calm, clear and accurate.

“Neurologically, your brain function lights up when your attention gets diverted,” Fairn says, “because the parts of the brain associated with fight or flight and fear become heated".

The key for an elite athlete is to move back to the blue, which is where mental techniques come in.

First a player needs to recognise the "red flags". Then it takes "deliberate effort to get attention back and not be diverted by an unhelpful emotion."

“This is about developing a very deliberate skill," Fairn says. "Deliberate is something we try and build into people’s language.”

To bring themselves “into the moment, into clarity, into the blue,” a player starts to breathe slowly and deliberately, before use a cue to "reboot". That's why you may have seen former All Blacks captain Richie McCaw stamping his feet, or his successor, Kieran Read, looking around the stadium.

These were their reminders "to get your attention back on the task at hand, rather than something you are worried or anxious about.”

These were their cues to reboot. They also used acronyms to help them focus on the task at hand, such as LQB (lightening quick ball) and OTG (over the gainline). 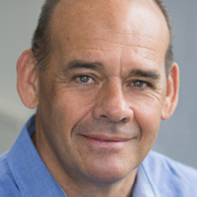 Despite the simplicity of red and blue, there are no short-cuts here to performing under pressure.

He adds: “If you want to build up strength, you go to the gym and work out three times a week. If you want to develop your ability to concentrate and focus and be flexible in what you do from a mental perspective, why wouldn’t you apply the same approach?”

“Coaches often talk about the top three inches,” says Fairn, “but if you ask 'what are you doing to build mentality', few of them would be able to answer with any clarity.”

The starting point for the All Blacks was to visualise scenarios of things going wrong.

“This is the biggest test on your mentality, resilience and the quality of your skills and processes,” Fairn says, “but often people start with positive thinking, 'imagine everything going right and you win'.

“We looked at all the things that could go wrong and what the mental response would be. How would you get your attention back? How would you adapt your strategy? How would you continue to execute your skills?”

Each player worked on his own personal strategy and cues. They also looked at control circles.

“One of the biggest risks to mentality is getting caught up in things you can’t control," says Fairn. "So we get people to write down and recognise what they can and can't control and what they can influence."

The other bit of bad news for us mere mortals is that mental skills alone are never enough - you need a technical and physical bedrock to be able to perform under pressure.

“Under intense pressure, you need to focus on the process and go back to the basics of your technique, which you've practised over and over again. I may have strong mental skills, but I'll never win the Masters, because my technical skills aren't good enough.”

The All Blacks used something called a 'skills ladder' during training: ramping up the intensity and pressure under which they had to execute their skills. Former All Black Andrew Mehrtens described it as “striking the balance between being lucid and motivated".

"Risks would be built into practice and you would look at how people responded," Fairn says. "You would make them more tired or increase the speed, so technical capability was brought under more strain."

One of the first elite coaches to engage Gazing was Brian Ashton, with the RFU Academy and then during his time as England head coach.

“What Brian quickly realised was that there was a scientific, academic and cognitive depth to what we were doing," Fairn remembers. “What people fundamentally don’t do, in any coherent, sustainable and effective way, is build in an understanding of mentality and a focus on practising the aspects of mentality to combine with the other elements to deliver performance on the day. They don’t do that, even the top class coaches."

Gazing say they never get between the coach and player, but equip them to perform under pressure.

Ashton, who will be hosting TGG's Cohesive Coaching, explained how he built mentality and performing under pressure into his coaching sessions.

Brian Ashton: "We called them disruptive actions. I'd take a player off, red card a player, make the pitch smaller, all without warning and without giving the players time to think. I remember taking Jonny Wilkinson off in one practise match and he stood with me at the side. Things unravelled and it took the other players about two minutes to realise what had happened. That told us we needed to do more work on thinking clearly in the heat of battle. Martin Fairn used to come out onto the training pitch with me and observe what I was doing. Some coaches feel their voices have to be heard all the time. But there are times you don’t need to speak, you let the players take charge."

GOALKEEPER Ben Foster says Watford have thrived under Nigel Pearson because the team was “crying out” for a manager and not a coach.

FORMER Barnsley assistant Dale Tonge reflects on 12 months that encompassed elevation from the U16s to the first team, promotion and the sack.

Data 'surveillance' can lead to anxiety and fatigue, report finds

DATA collection and analysis in elite sport can amount to “ubiquitous surveillance” and result in feelings of anxiety, precariousness and performance fatigue among participants, new research has shown.

David Slemen: Why the Head of People is sport's best-kept secret

IN the latest instalment of his series on the five key new roles in football, David Slemen looks at the Head of People and Team Development - the most under-represented position with the greatest potential to create competitive advantage.

DAVIDE ANCELOTTI may be the youngest assistant manager in the Premier League, but he already has a CV few others can match.