AS one orthopaedic surgeon who treats Premier League footballers put it, “it got to the point where PRP was being injected into everything”.

PRP - platelet rich plasma - has become a vogue treatment in the top flight, with players receiving injections for cartilage, tendon and ligament injuries.

Dr Ramon Cugat is described as the “Godfather of PRP” and players from Manchester City, as well as several other European teams, are regularly sent to him for treatment in Barcelona.

Dr Hans Muller-Wolfhart is the other famous proponent of the procedure and is well-known as the Head of Sports Medicine at Bayern Munich and the German national football team.

However, the science behind PRP remains unproven. The National Institute for Health and Care Excellence (NICE) has concluded that it’s safe, but that the quality of available evidence about it is too poor to support any verdict on its effectiveness.

This is why the four authors of a report published last year set out to pose the question, “why clinicians might go out on a limb to use an unlicensed and experimental therapy such as PRP”. 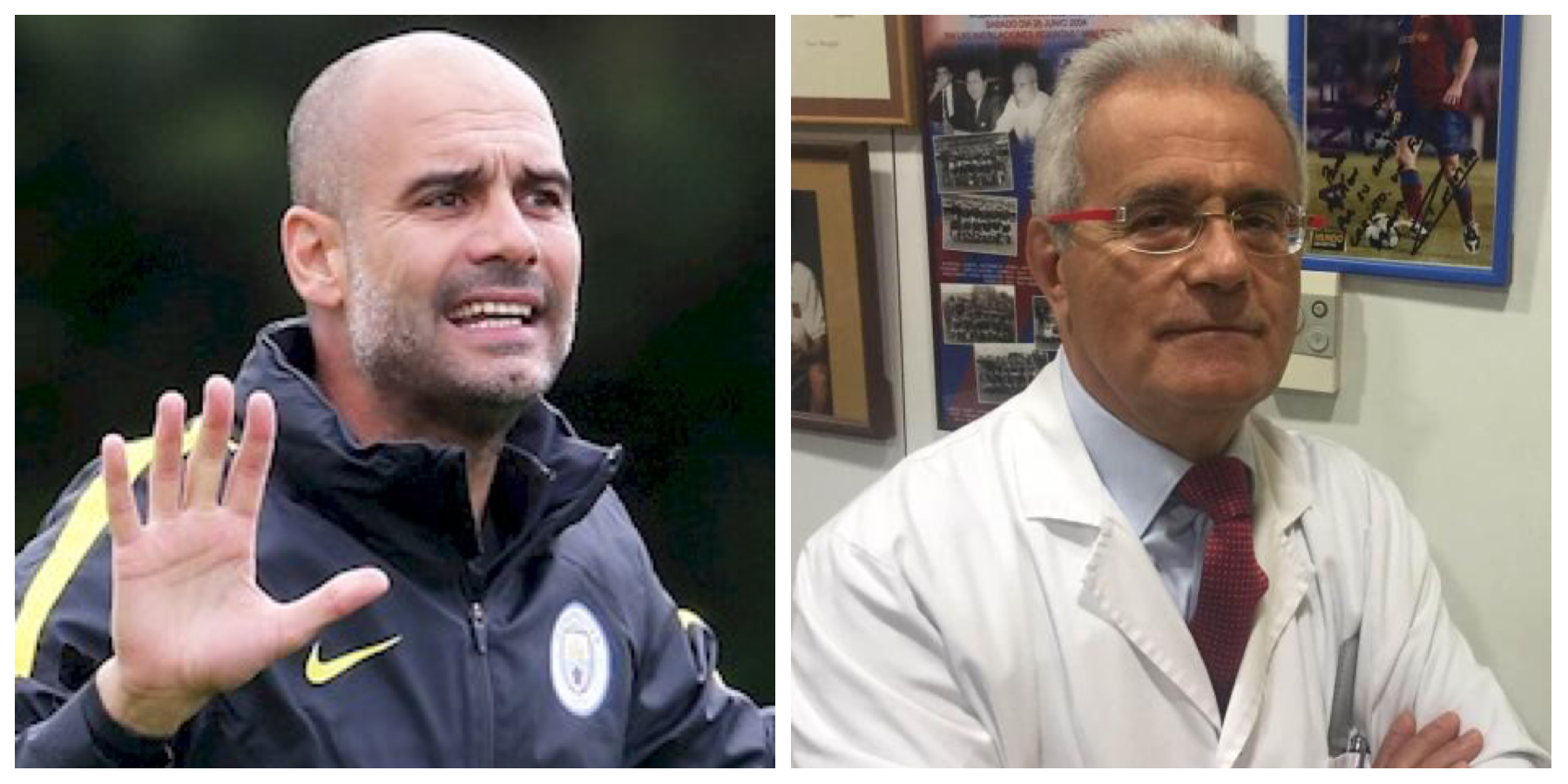 READ MORE: Pep Guardiola and the 'Messi of medicine'

The basis of the study is a series of confidential anonymous interviews with 38 Premier League “practitioners and other stakeholders”, including Heads of Medical, Academy and Physiotherapy and physicians and surgeons.

Lead author, Professor Michael McNamee of Swansea University, told TGG: "The professionals working in sports medicine in the Premier League, as in most elite sports I expect, find themselves in between a rock and a hard place.

"I am convinced of the high levels of professionalism in the field but, in the case of PRP in particular, one has to empathise with the kinds of pressures they face.

"Some coaches and managers leave them to make medical decisions on medical grounds. Others don’t.

"Many healthcare professionals face incredible pressure from the coaching staff, the players who are desperate to play, and – incredibly – agents who have a vested interest in their player being in the 'shop window' as often as possible.

"The pressure agents bring to bear seems wholly problematic, even to the point of taking players away from the club for treatment at their 'preferred' medical personnel, irrespective of their complete ignorance of the sports medical field.

"Navigating that minefield is one where the Premier League, and the profession more generally, needs to give much more guidance."

The report is fascinating, as it provides insights not only into the reasons for the use of PRP, but also into the competing pressures facing medical departments, from players and agents to medical companies.

The July 2017 report mentioned above - “Ethics, Evidence Based Sports Medicine, and the Use of Platelet Rich Plasma in the English Premier League” - describes the process of PRP as “extracting blood from the patient, treating it in a high-velocity centrifuge to separate components, resulting in a high concentration of platelets and growth factors and then re-injecting”.

PRP is thought to aid the healing process by promoting cell growth when re-injected into the affected area. It’s important to note that the use of PRP is NOT prohibited by Wada.

“Despite the presence of some growth factors, platelet-derived preparations were removed from the Prohibited List as recent studies on PRP do not demonstrate any performance-enhancement beyond a potential therapeutic effect,” the agency states.

Nothing has been added to the patient's blood in PRP, whereas “growth factors” from “any other source” remain prohibited by Wada.

The report states that “the current evidence base for the efficacy of PRP in treating sports injuries remains mixed”.

There have been a number of trials of the treatment, but they are difficult to compare because the conditions were not standardised. Some found no evidence that PRP promoted “better clinical outcomes than placebo”, while others found the treatment to be beneficial “in terms of pain scores and functional or structural outcomes”.

Some of these effects were not long-lasting or anything other than marginal though.

In an NHS context, NICE says the procedure "should only be used with special arrangements for clinical governance, consent and audit or research.”

WHY IS IT SO WIDELY USED IN FOOTBALL?

According to those interviewed, there were a number of reasons, which are not always clinical:

“If I have a player and am offering him a treatment for something which is a problem… in some respects what it does is stops him going and getting a treatment from somewhere else because he hasn’t been offered it by me. And I would rather control the degree of mismanagement." (Participant 23, Sports Physician).

"If I don’t do anything for the player they become frustrated. It is unacceptable treatment in the eyes of the athlete, the agents and everyone else. They will go and seek alternative treatments with that. So, we will then lose. Under the control situation we will do something and the mainstay that we tend to do is PRP. I can’t be having players, behind my back, going to these places, I want to control it. So, we brought it in-house. We sent [our sports physicians] to get the training, to look at the literature to discuss the various techniques and how we are doing it and what we are doing with it. So, we try to follow as much evidence-based as we can and we’re using the PRP because we consider it safe. We haven’t had any adverse reactions in our knees or any of those issues with it." [Participant 11, Sports Physiotherapist].

"I tell you what it’s really done, it’s done a couple of things for us. We will use it in the knee joint, for example. So, the player stops asking for anti-inflammatories because we tell him it’s pointless doing the two because they are going to work against each other. So, suddenly, this dependency and this absolute crush on having to have them, this culture of just pumping, stops. We’ve cut down our anti-inflammatory usage by, it must be, about two thirds, completely gone. So this pre-match 'give me an anti-inflammatory, gimme, gimme’’ has gone.' (Participant 11, Sports Physiotherapist).

"So, to be honest, if there was somebody next door who was doing horse placenta and the player insisted on it, as long as it wasn’t doing any harm I personally wouldn’t have any problem with it. The simple reason for that is if the player is that fixed in their head that’s always going to be at the back of their mind ‘‘oh yeah, but if I had the horse placenta...’’ So, to try and rationalise it to them and to try and explain to them would be very difficult." (Participant 14, Sports physician).

"That’s where the art of medicine comes in. We have patients with overload injuries or they are over-trained, maybe, and you’d like to take them out for three months and that’s a lifetime for them. Then, you have to put on something that you do to avert their attention and to get them to do something other than their usual use. I think this goes on in every aspect of medicine, I think because there are so many things that we think we know but we don’t’ know. Any clinician will use placebo as part of their medication, so to speak. Any experienced physician." (Participant 10, Sports Surgeon).

"If your player really believes in the process of what’s going on, I think the outcomes of that procedure are a lot better and your compliance is a lot better." (Participant 11, Sports Physiotherapist).

"It got to the point where PRP was being injected into everything. I’d heard surgeons from Spain saying they just put it in the knee after surgery. Well, isn’t there quite a lot of blood in the knee? So there’s an awful lot of snake oil out there, and I’m quite cynical about it. I resist getting trapped into this sort of arms race that you see particularly in elite sport. I think elite sport almost drives it to some extent." (Participant 25, Orthopaedic Surgeon).

"Sports medicine has got very little high power of research in it... because of the sample size, and where the questions, particularly in novel treatments, we don’t even understand the treatment. I mean, we don’t know what works in PRP. So then you come down to your own opinion and, obviously, your own opinion is not particularly valid because you haven’t got enough cases to be able to develop an opinion, apart from anecdotal experience." (Participant 23, sports physician).

"The players bring them in (products and treatments) because they will get tapped up by a company who say 'we’ll give you 10 grand [£10,000], you go and tell all the other guys because we need two or three and once we’ve got that then it will just spiral out, the kids will want them, everyone will want them'. So, fortunately, I’m quite conservative, traditional in that sense rather than I’d like something that’s got more evidence base to it than that." (Participant 11, Sports Physiotherapist).

The authors go on to add: "Many of our participants noted that the pressures on attempting novel treatment were often driven by agents who stand outside the therapeutic context, and who were swayed by what they perceived to be effective treatments for other players, despite their lack of medical knowledge of those player-patients or the treatment they had undergone.”

For the authors - Professor McNamee, Dr Catherine Coveney from Leicester De Montfort, Dr Alex Faulkner from the University of Sussex and Jonathan Gabe of Royal Holloway - there needs to be "further reflection on professionalism in sports medicine, the nature and roles of evidence in ethical decision making and its use in understanding of what constitutes evidence-informed medical expertise is clearly merited."

It’s important to emphasise that this article is no substitute for reading the report in its entirety, which you can do HERE.