Philosophy and tactics of Maurizio Sarri

MAURIZIO SARRI could, potentially, be the manager that Roman Abramovich has always been trying to find.

The 59-year-old believes in attacking, stylish football, he develops players and, crucially, is happy to leave the board to make the signings.

Yet, as we all know, Abramovich prizes winning above all else and Sarri is yet to claim a major trophy in his managerial career. With the resources now at his disposal at Stamford Bridge, in terms of both players and budget, this could be about to change.

I've studied Sarri closely for a book I've written about him and here are some insights on his philosophy and tactics:

Sarri's principal objective is to entertain the fans with beautiful and fun football. The players enjoy working with him, because he has a dynamic style of play and encourages them to be positive.

He believes a player performs twice as well if he’s having fun and says that inside every footballer is a child. For Sarri, the job of a coach is to bring out that child.

At Napoli, he proved adept at managing up and didn’t have any major problems with the board or with President Aurelio De Laurentiis. There was obviously consultation over signings, but he never demanded that a certain player be signed. As we know, this has been a problem at Chelsea in the past.

The Italian is a developer of players. In Naples, he helped many of them achieve a level they might never have imagined possible. With his coaching methods and obsessional preparation, I believe he can develop any player, no matter his age or profile.

There were many examples at Napoli: like Senegalese centre-back Kalidou Koulibaly, who was error-prone before Sarri arrived, but developed into a world-class player under the Italian; or the Algerian full-back Faouzi Ghoulam, who attracted interest from many of the Premier League's top sides before sustaining a serious knee injury.

Refreshingly, Sarri doesn’t blame referees - although he will be an animated figure on the sideline on matchday, which may create tension with opposition coaches. In terms of the media, he doesn't like silly questions, but answers genuinely and authentically, which means he sometimes says things he shouldn’t.

Now that Sarri is at a team with far greater resources than he enjoyed in Naples - in terms of budget and the players at his disposal, both at first-team and Academy level - I believe he can create a masterpiece in west London.

How long does a coach need to implement his philosophy? Well, judged on the evidence of Sarri's first Chelsea game, against Perth Glory in Australia, maybe only a week.

As at Napoli, he employed his familiar 4-3-3 formation, which you can see below. 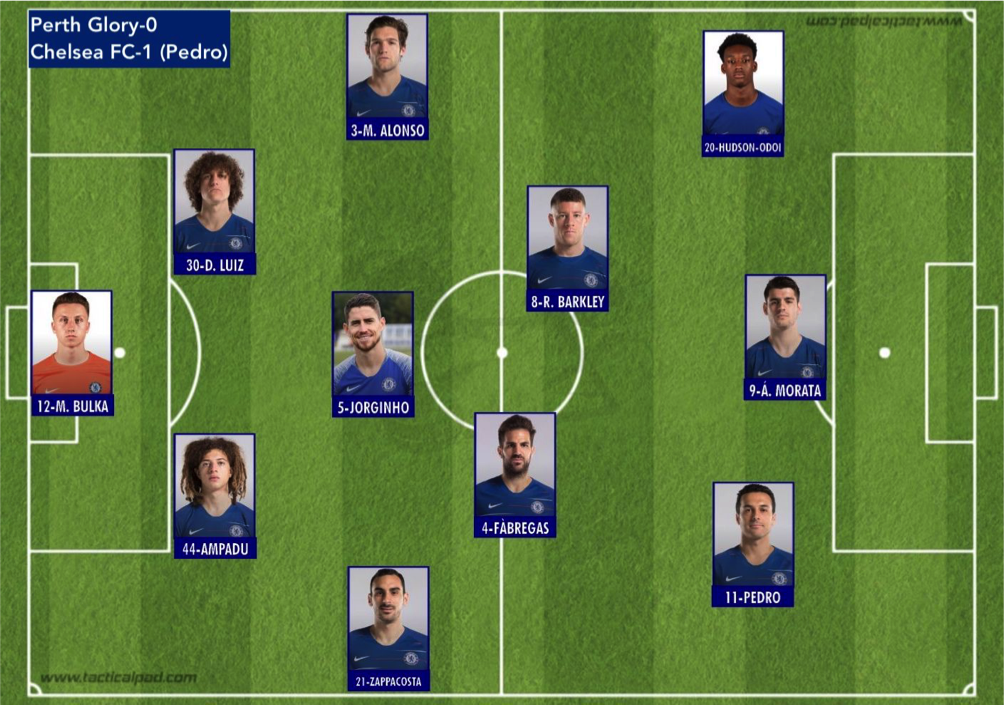 For Sarri's game model, the goalkeeper needs to be secure and confident with the ball at his feet, providing an anchor point for the team. He needs to be available as a passing option and to have the ability to pass equally well with both feet.

Marcin Bulka did well against Perth but is unlikely to be the first choice this season, even though Thibaut Courtois has been heavily linked with Real Madrid. Any replacement will need to be comfortable in possession, making it no surprise that Jordan Pickford has been touted as a replacement.

Sarri also requires centre-backs who can bring the ball out and construct play, which David Luiz and young Ethan Ampadu did effectively against Perth. When one centre-back had the ball, the other provided coverage in the central area of the pitch. This did two things: it offered the option of a safe pass and protected the team if the ball was lost.

There were usually at least three passing lanes available for the ball-carrier against Perth. By creating a diamond, the man in possession had passing possibilities and numbers if the team lost the ball. Sarri likes his players to press and win the ball back quickly when they lose possession.

The Italian wants his side to go forward decisively if possible, with a vertical pass or diagonal one that breaks the lines. But if options weren't available against Perth, Chelsea were happy to keep possession, even if it meant passing the ball slowly across the defensive line. Napoli were one of the best possession teams in Europe under Sarri.

Against Perth, striker Alvaro Morata or one of the two wingers - Pedro and Callum Hudson-Odoi - often pulled back into central midfield in the creation phase. They would turn and advance towards the goal if the option was on, or else play back to one of the three central midfielders, Cesc Fabregas, Ross Barkley and Jorginho.

There was then the opportunity to put the ball between the lines in central midfield, as you can see in the diagram below. By occupying these spaces, Chelsea's players created dilemmas for Perth. 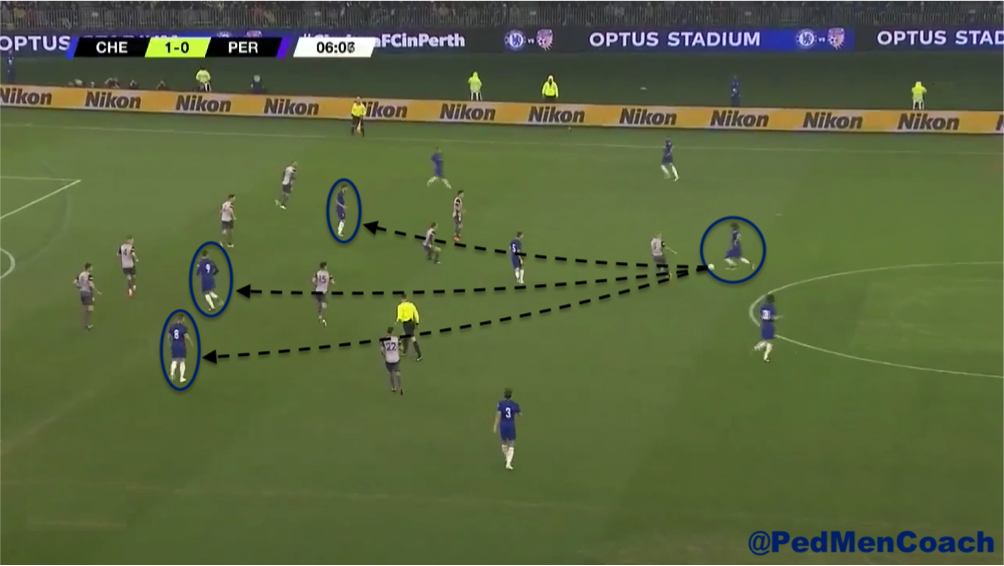 You’ll also notice that the players are close to each other, with nine in a relatively small space, creating triangles and diamonds to help link-up play between the lines. This also meant that if the ball was lost, Chelsea could press in numbers.

Sarri likes his teams to create maximum width and maximum depth in attack. By maximum depth, I mean giving the best chance of getting the ball in behind the opposition defence. Morata often played close to offside, on the shoulder of the defender against Perth, as you can see in the diagram in the next section.

Maximum width is something Pep Guardiola has used to great effect at Manchester City. Chelsea made the pitch as wide as possible against Perth, with Pedro and Hudson-Odoi often hugging the touchlines. Sarri also uses the idea of lanes - so if Pedro, for example, cut in, then Davide Zappacosta move into the outside lane. This produced diagonal passing options and dilemmas for the opposition winger.

As discussed, Morata often came deep to escape tight marking against Perth. This created a dilemma for his marker: of whether to go with him or stay in position.

If he had no options to advance, the striker passed back to a team-mate who was facing play, in this case Barkley. The forwards then did a disrupting ‘cutting move’, making runs to drag defenders with them. 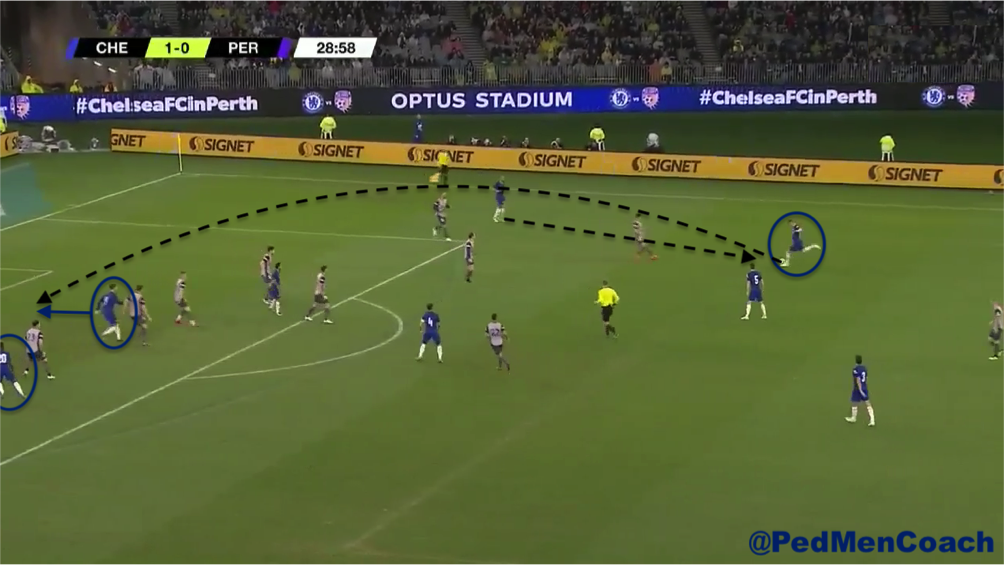 In other moves, Morata acted as a 'pivot' on the edge of the area, playing one-twos which opened up the possibility of a shot or one-on-one with the defender. This is something we'd frequently see Gonzalo Higuain do at Napoli.

Sarri also likes his players to create ‘positive diagonals’ inside the box: a diagonal pass that gives the opportunity of a first-time shot.

The full-backs and wingers provided options inside (in the half spaces) and outside for him. A one-two either allowed them to get the ball behind the defensive line or down the wing to cross into the box, which is what happened when Odoi crossed from the left and Pedro side-footed home for Chelsea's winning goal against Perth.

Pedro Mendonca is a Uefa-qualified coach, founder of the Football Coaches Lyceum and author of the book 'The Methods of Maurizio Sarri'