Giles has been Director of Football at Brentford since May 2015

The Bees made the controversial decision to withdraw from EPPP in the summer of 2016, instead launching a Development Squad for players aged 17 to 21 as well as a B team.

However, Giles told the TGG Podcast that “the facts have changed, with Brexit and with us getting promoted” and that “we are in a fundamentally different place now than we were five-and-a-half years ago, so you’ve always got to look at that.”

Following Brexit, English clubs are no longer able to sign European players under the age of 18 and are limited to bringing in three players between the ages of 18 and 21 from the Continent in each transfer window.

Brentford have previously recruited a number of young players from Europe, for example the Danes Mads Bech Sørensen and Mads Roerslev Rasmussen and Czech Jan Zamburek. All three played initially for the B team before progressing to the first team. Now that avenue has closed, a change of strategy will be needed.

When asked if the Academy could re-open, Giles said: “Potentially. We’ll keep it under review and under consideration. We’re always completely open-minded to doing what we think is right at this moment in time.

“Obviously over time things have evolved and changed. Mads Bech Sørensen and Mads Roerslev and Jan Zamburek - that route has been closed because of Brexit, which makes our life a little more difficult.

“Plus, if we ever got into Europe, we’d need a Uefa licence and there are some Academy-type requirements we’d need to meet, some boxes we’d need to tick, so again that’s a factor.

“Another thing that has changed over the last period as well [is] with Covid it’s been much harder to organise the games for the B team than before, when we could do what we liked (before), fly out of the country. That’s just a lot harder right now.

“Things change over time and you’ve got to reflect your current circumstances. For me it’s not a philosophical point of view of Academies good, bad, right, wrong. That’s not the decision we made five and a half years ago.

“We’re in a different place now. We’re a Premier League not a Championship club and we were Category Two at the time. So listen, it’s always under review. However, what I would want to do is make sure it’s the best Academy we could possibly open for us in our area with the size of club and most probably keep that B team element going as well, because it has been successful.”

Brentford were previously a Category Two Academy, but Giles said the games programme is the “biggest advantage” of being Category One.

He explained: “If the Category One teams have got the better players and they’re playing against each other, then they’re getting better development games against tougher opposition. That then attracts better players in itself. It’s almost like a feedback mechanism.”

Brentford have focused on signing more young English players as a result of Brexit with, for example, 17-year-old Fin Stevens joining from Worthing in July 2020 and 18-year-old keeper Matthew Cox from AFC Wimbledon last summer.

However, the market for young English players will become a lot more competitive because of Brexit, Giles said.

“What you’ll see now, because the bigger teams can't take players from overseas because of Brexit, [is] they’ll look at Category Three, Four players and their better players at 14, 15, and they’ll want to gravitate there,” Giles said.

HAS CLOSING THE ACADEMY BEEN SUCCESSFUL?

Despite widespread criticism for scrapping the Academy in 2016, Giles said he believed the strategy had been both justified and successful.

“The aim five-and-a-half years ago when we made that decision was to get promoted,” he said. “We can talk about developing players and bringing young players through, but ultimately we wanted to get promoted.

“So we decided we would focus absolutely everything on that objective. From that perspective you could say yes, it’s been successful. If I’d been in that job in Newcastle - for argument’s sake, because I’m from there - you never would have made that decision, because it’s got a big catchment area, lots and lots of young players who want to come, and it should bring players through."

He added that it was wide of the mark to suggest that the club had given up on youth development by scrapping the Academy. 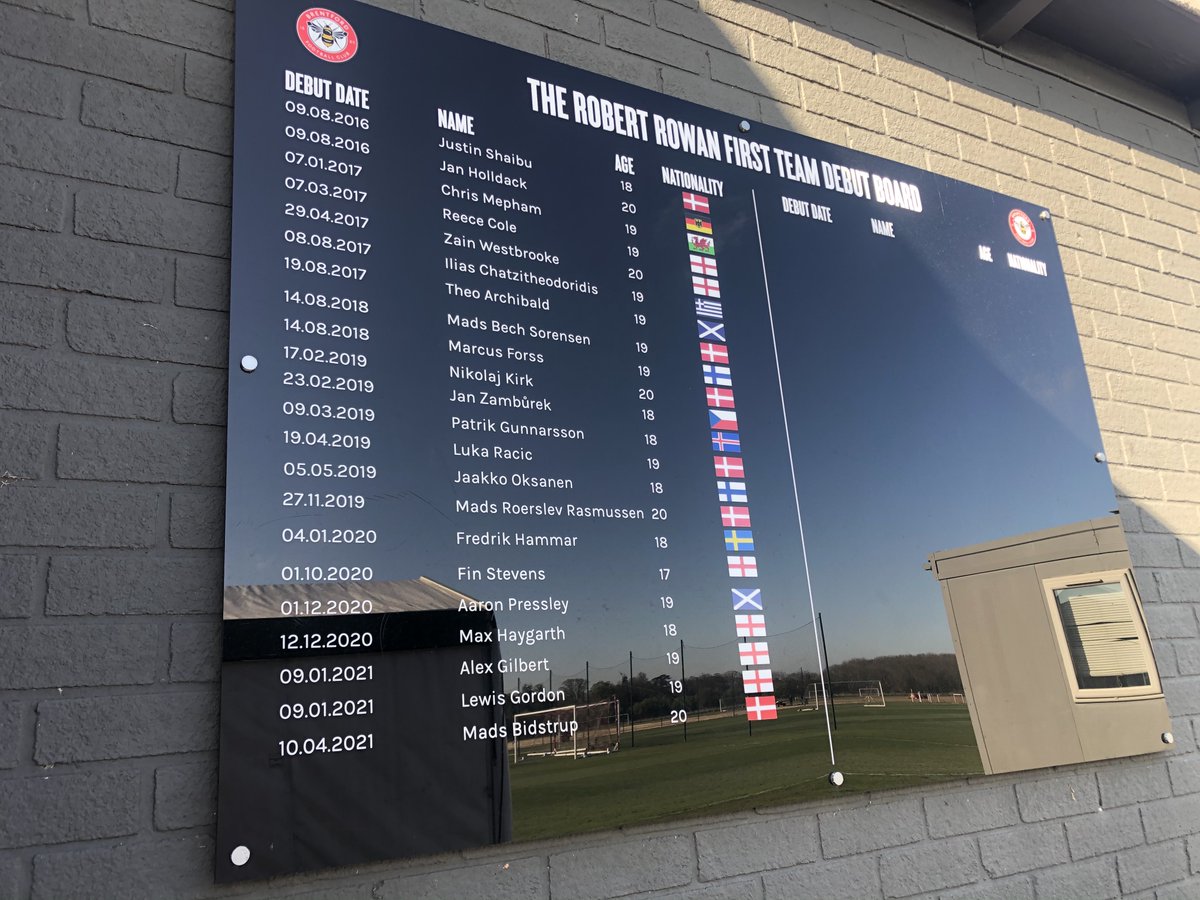 “If it comes to developing young people and playing young players I don’t think you could see a better example of that than Brentford over the last number of years, we have really focused on that," he said.

At their training ground, Brentford have a board listing the names of all the B team players who have gone on to make first-team debuts (pictured above). It is named after the club's former Director of Football Operations Robert Rowan, who died at the age of 28 in 2018. To date there are 22 names on there, the most recent being Mads Bidstrup.

“We took players who, yes, they were young, but who were much closer to the first team than we were going to get through the Academy system and were ready to make an impact and try to get promoted as quickly as possible," Giles said.

“That feels to me like a good thing - a good opportunity for us first of all to look at those markets but good also for those players.When we got promoted last year, Mads Bech Sørensen played something like 25 games, came through our B team; Marcus Forss, while not a regular starter, scored plenty of goals, scored the winning goal against Bournemouth in the play-off semi-final. He a player who had been released.

“We saw these opportunities of players who would get released but go on again and we thought we could pick them up. Marcus Forss, he was released from his Academy and we gave him the opportunity to come in and play with us. Fin Stevens, he was on the bench for us a lot last season, a young player who came from Worthing, we gave him that pathway."