OLIVER BIERHOFF has described the modern footballer as an “independent entrepreneur” who takes control of his own career path.

That might include employing their own chef, physio, fitness coach and psychologist away from the confines of the club. Now Oliver Gage, a native of Sheffield who heads up recruitment and performance analysis for the Canadian Premier League, has taken this concept a step further.

The former Houston Dynamo man, whose father Kevin played more than 400 senior games for the likes of Wimbledon, Sheffield United and Aston Villa during a 20-year career, is increasingly busy as a personal analyst and coach for strikers around the world.

His clients include an international in the Bundesliga, as well as four players in England, spanning the Championship, League One and League Two. Gage, who was a semi-pro player before moving into coaching and analysis, describes himself as a “specialist attacking coach who uses data to help improve players.”

The work involves extensive use of video and stats and most of it is conducted remotely, via webinars, Skype or WhatsApp. When working with a player, Gage usually starts off by using CoachTech, the online communication platform he built in 2017 to educate coaches about analysis, before moving onto detailed post-match analysis.

He says he developed a particular interest in working one-on-one with forwards when Head of Recruitment and Performance Analysis for Houston Dynamo in the MLS from 2015 to 2019.

Although he hopes to do more on-field technical work with players in future, like the England forwards coach Alan Russell, he deliberately focuses on tactical elements at the moment using analysis. Put simply, he tries to help forwards have more shots from “high-value positions”, because this is where he believes there is most potential for improvement for the majority of them.

"I've helped clients to score three of four more goals a season," he says, "which might not sound like a lot, but when you consider how much a single goal is worth in the Championship let alone the Premier League, I think it's worth the investment."

Pundits often describe certain players as “good finishers”, but Gage, who has been working for the Canadian Premier League since October 2018, argues the concept is “massively exaggerated in football”.

“There are a small number of players you can legitimately describe as good finishers,” he says, “like Sergio Aguero, because he has scored his more than his expected goal numbers three years in a row. Generally speaking, professional forwards score about you would expect based on the shots they take though.

“Good goalscorers tend to be good because they have a lot of shots from high-value positions over the course of a season. Most of the players I'm working with are below international-class and it is more important to help players understand that getting into the right positions and taking high-value shots is more beneficial than being ‘a good finisher’.”

Gage uses his CoachTech platform to illustrate these points and to educate players about concepts like expected goals.

For example, the chart below shows expected goals and actual goals for top Premier League strikers over the course of the last three seasons (2017 to 2020). 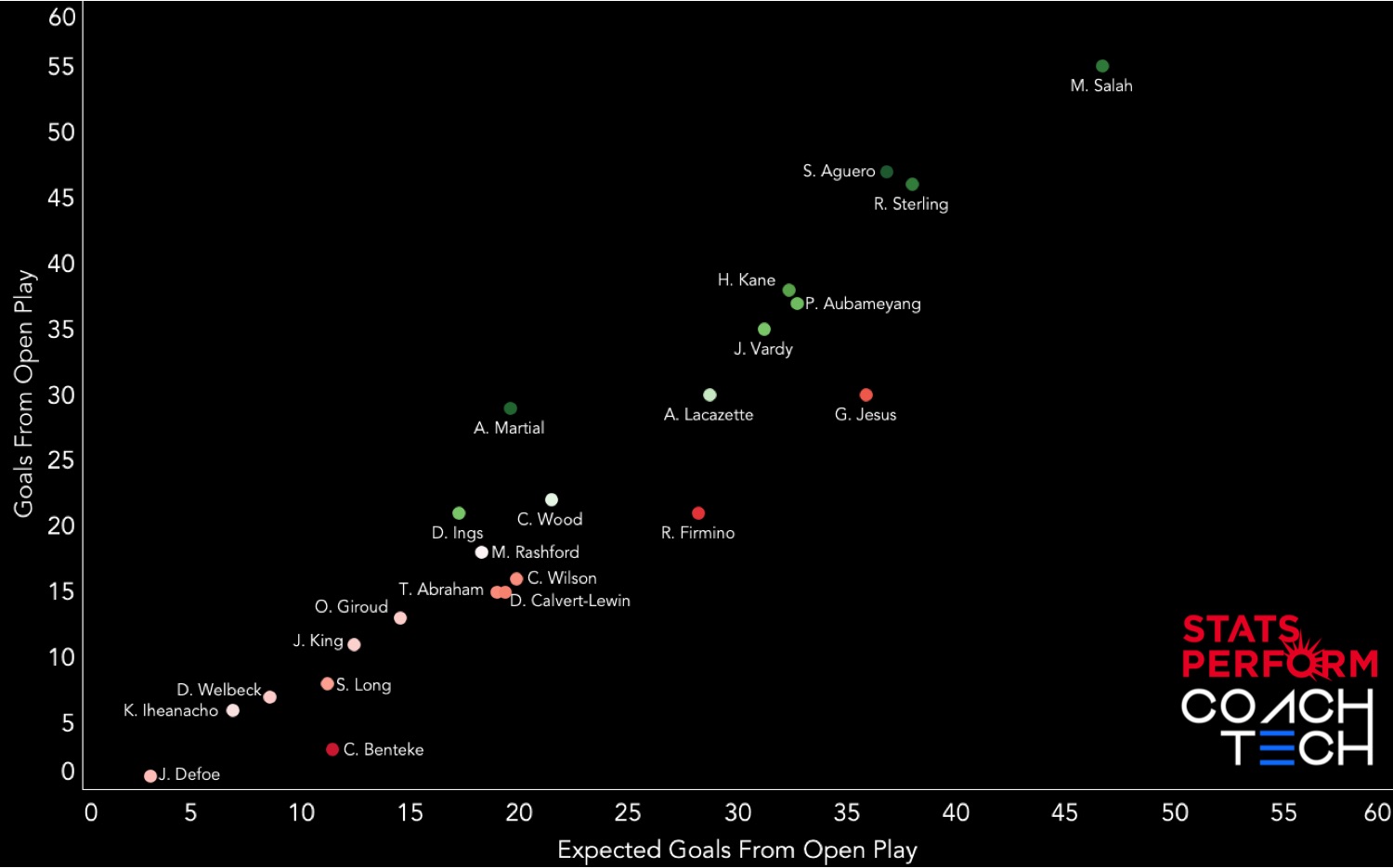 “You can see that actual goals are pretty closely related to expected goals,” Gage explains.

"Mo Salah has massively over-performed his expected goals over three years, but this is almost exclusively down to the 2017/18 season when he scored about 8.5 more goals than the sum of what was expected.

The chart below shows number of open-play shots per 90 minutes and shot conversion rate over the last three Premier League seasons for a selection of players. 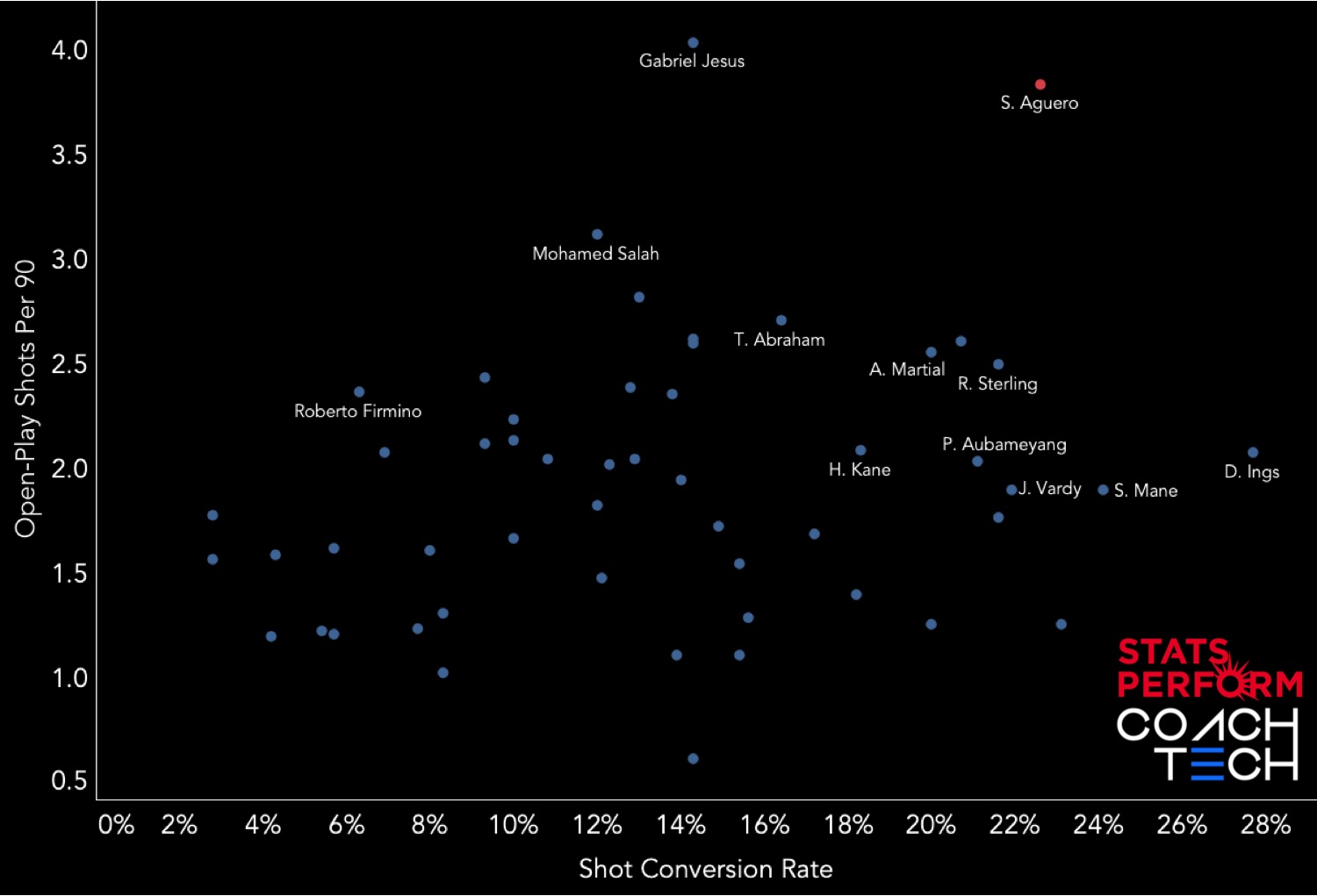 "Aguero is an all-time great, but others have a better shot conversion rate, as you can see," says Gage. "And he only ranks 39th of 76 strikers who have played more than 900 minutes for shots-on-target percentage. Where he is truly exceptional is in the volume of shots he takes."

This belief that it's the volume of high-value shots that will make the most difference for most players informs all of Gage's one-on-one work with forwards.

With a striker in the third division in Germany, he used video and data to analyse the position and type of shot the player was taking.

“From that, and the overall data analysis I’ve done about strikers, we worked out how he could score more goals. We worked together on setting some realistic targets which would see him become more dangerous and score more goals.

"First, we started with education about shooting from high-value positions, then looked at situations from previous games where he might have made a different decision, be it with his movement, positioning or choice of whether to shoot or pass. After that, the targets became more clear and the buy-in became greater.

"I fed back to him quite regularly, every three or four games, looking at the shots he was taking and where the better options were. The result was that he scored more goals last season.”

Gage uses Stats Perform for his data and their Provision tool, which is tied to video.

WORKING IN TANDEM WITH CLUBS

Some of this might raise alarm bells. After all, aren't the players pursuing individual goals (quite literally), rather than team ones?

"This isn’t any different to clubs offering goal bonuses to strikers, which most of them do,” he says. “And you can’t escape the fact that most forwards are trying to score more goals and are judged on their number of goals. That's why they're employing me.

"But it's certainly a case of getting a player to score more goals, no matter what. Some of the methods used see an increase in chance creation for others too."

Most of the approaches for his services come directly from players, or else their agents, although “there was one player I got in touch with, because I noticed something in his game that I thought I could help him improve.”

However, he insists that clubs are kept in the loop whenever he works with one of their players.

"I don’t want to operate in the shadows,” he says.

“I need a level of buy-in from the manager and coaching staff and I’ll at least had had a conversation with them before working with the player.

“With some, there has been a little bit of pushback, but fortunately every player has improved, which makes it easier."

Many clubs, particularly in the lower tiers, welcome his involvement, he says.

“Typically, some clubs might only have one first-team analyst, who is having to do pre-match and post-match analysis, so they’re not going to have the time for this kind of one-on-one work. That’s where a personal coach or analyst like me comes in."

This is where we come back to where we started and that comment from Bierhoff about independent entrepreneurs.

“The days of players being totally at the behest of the clubs are gone," Gage says. "They're ultimately responsible for their own careers and know what's best for themselves.

"Most of the bigger clubs already employ specialists - like Liverpool's throw-in coach and Manchester City's set-piece specialist. Hopefully what I do is just an extension of that.

"Sometimes a player will feel he or she needs to take control and get specialist help where it's needed though. Sometimes the players want more than the clubs are able to give.”