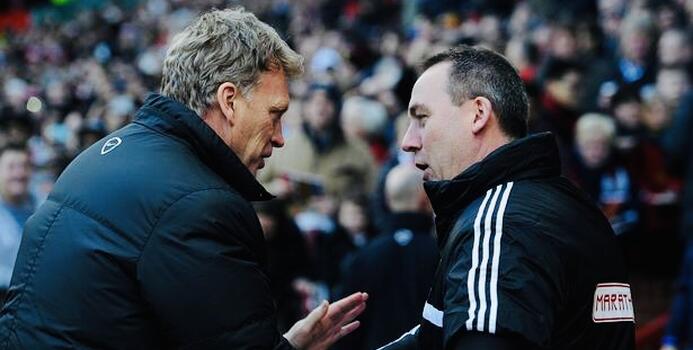 DAVID MOYES says he does not regret changing Sir Alex Ferguson’s backroom staff when he took over at Manchester United.

The Dutchman later told TGG: “As time went by, more and more things started to shine through and emerge that he [Moyes] wanted to do it his way with his people.”

The Scot lasted just nine months in the Old Trafford hotseat and many cited the staff changes as a major reason for his demise. This has come into focus again recently, following the impact Phelan has made as Ole Gunnar Solskjaer’s assistant at United.

However Moyes - who brought in Steve Round as his assistant, Phil Neville and Jim Lumsden as first-team coaches and Chris Woods as goalkeeper coach, defended the changes in an interview with beIN SPORTS last weekend.

“I had offered Rene the job and in the end he had decided not to stay,” the Scot said. “In hindsight, had I known Rene wasn’t going to stay would I have been better keeping Mike?

The Scot lasted just nine months in the Old Trafford hotseat and many cited the staff changes as a major reason for his demise. This has come into focus again recently, following the impact Phelan has made as Ole Gunnar Solskjaer’s assistant at United.

However Moyes - who brought in Steve Round as his assistant, Phil Neville and Jim Lumsden as first-team coaches and Chris Woods as goalkeeper coach, defended the changes in an interview with beIN SPORTS last weekend.

“I had offered Rene the job and in the end he had decided not to stay,” the Scot said. “In hindsight, had I known Rene wasn’t going to stay would I have been better keeping Mike?

“That’s decisions, but that’s what happens in football management. You make your decisions and you go with it. You see that quite often managers when they move clubs and take their whole staff with them, so it wouldn’t be unusual for me to do that.

"We hoped we could have talked him out of Real Madrid."

Moyes confirms he tried to tempt Gareth Bale to #MUFC at the last minute, even putting a helicopter on standby! #beINPL pic.twitter.com/CEmyhzcDhX

In an interview with TGG two years ago, Meulensteen said: “United was an established team that had just won the league by 11 points. It would have been a sign of common sense to keep the staff. That was what Sir Alex anticipated.

“He knew it was a well-oiled machine - ‘There you are, let it run its course and you will find your feet as you go along.’ Change will always create resistance, unless everyone is convinced change is better.”

CROSSING WITH A PURPOSE

Meulensteen returned to Old Trafford as Fulham manager in February 2014. His side were bottom of the Premier League, having won three of his 11 Premier League games in charge.

Moyes was under pressure with United seventh in the table. A remarkable game unfolded, with Darren Bent scoring in injury time to secure a 2-2 draw for the visitors.

Meulensteen told TGG: “We basically said, ‘no problem, let them throw the crosses in’. I had big tall Dan Burn at centre back and Maarten Stekelenburg behind in goal. They didn’t harm us, not at all. That day it was just throw it in from United.”

There has been a decline in the number of crosses by Premier League teams in recent seasons, as you can see here, and Meulensteen added: “It’s like anything, you need to cross with a purpose.

"You’ve got your early crosses in behind the back four when they are still running backwards and these are very dangerous. Then you get further up the pitch and the back four is set. It’s then all about the type of cross and the area you want to hit. Then it’s the ones more from the byline.

“Do you want to hit the near post or back post? A lot of the time this is what you miss.

"People get into an area and just cross the ball and see what happens.

“The purpose comes from training. If they leave the back post free, that’s where people arrive and where you send the cross. If the back line is all six five, cross low or look for cut backs."

BREAKING DOWN A MASSED DEFENCE

Meulensteen says this was a big contrast with the philosophy of Ferguson, who was all about “attacking with a purpose”.

“We always had a whole array of ways to score goals,” the Dutchman said. “Then it comes down to the quality of the players to execute it.

“We anticipated that a lot of teams would drop behind the ball, especially at Old Trafford, so you would have 21 players in one half. You can only break them down if you have one v one interplay and free your players in one v ones and two v ones.

“That was what we looked for – one-touch interplay in combination with runs. That created one v ones and two v ones with overlaps. The big thing for us in possession was rhythm. Top teams have the ability to create, maintain and change rhythm.

“When we played out from the back, our rhythm was slower, more deliberate. But when we got into congested areas in the final third, bam, it suddenly changed to fast one-touch.

“We worked on that every single day. Every possession game was about those touches, because you can’t defend them.

"Too often teams take touches they don’t need. That’s when the level goes down.

“If five players touch the ball twice, it takes about 10 seconds to get round. If they touch it once it takes five seconds and the speed of the game goes up and you get players out of position.

“Drag them in, drag them in, and then release the wide man. If you look back, those were the first things to disappear in the United team after Sir Alex left. If the players don’t use it they lose it.”