Meulensteen: How do you solve a problem like Paul Pogba?

RENE MEULENSTEEN first started working with Paul Pogba when he was a 17-year-old on the verge of the Manchester United first team in 2010/11.

“We always brought a lot of reserves to train with the first team and Paul was the one we were looking at for the following season,” Meulensteen remembers.

“I worked with him in some smaller groups and we were looking to measure him up with the first-team players. Paul was on the verge of the first team and Jesse Lingard was another big hope.

“Paul had similar traits to Patrick Vieira - he’s tall, strong, can drive forward and is able to find a pass. That’s the type of player we thought he could become for us, but then he went to Juventus.”

After making his Premier League debut in January 2012, at 18, Pogba moved to Turin the following June, having made just three senior appearances for United. Meulensteen, who was first-team coach at Old Trafford from June 2008 to June 2013, continued to keep close tabs on the Frenchman, who seems to have become a lightning rod for the fortunes of the entire team at United.

We asked Meulensteen whether such outspoken criticisms are warranted.

Despite a world record £89.3m move back to United in 2016, Pogba has achieved his greatest successes away from Old Trafford. He claimed four Serie A titles with Juventus and won the World Cup with France last summer.

“He clearly struggles to dictate the game if he doesn’t have good enough players around him," Meulensteen says. "With Juve and France he did extremely well, but had players like Andrea Pirlo, Claudio Marchisio and Arturo Vidal with him in Turin, and N'golo Kante for France.

“The pace of the game is also much slower in Italy than it is in the Premier League, where it’s constant action and you have to be urgent both in and out of possession. If you look at some of Pogba's best games for United, they've been alongside Ander Herrera. The two of them are complementary.

"Herrera gives Pogba the platform to get in the box and play those searching passes, because he keeps the balance. He’s able to stop the fires, is mobile, can pick the right passes and has really good game understanding. I don't think the other central midfielders we've seen have been able to provide that same platform.”

Indeed, Herrera, who has been heavily linked with a summer move to PSG, was a regular starter for United during eight consecutive wins under Solskjaer in December and January, featuring in many of their best performances, including the 2-0 league win over Chelsea and 3-1 FA Cup victory over Arsenal.

However, the Spanish midfielder has not played since the Premier League victory over Watford on March 30th, after which United have lost five of their six games.

“Paul has obviously suffered a bit from the lack of quality around him," Meulensteen adds. "When Ole took over people got carried away - ‘we’ve got the old United back’ - but after that PSG away win in the Champions League (on March 6th) everything has been turned on its head.”

IS HE DOING ENOUGH?

Despite these mitigating circumstances, Meulensteen says Pogba should undoubtedly be doing more.

“Top-calibre players make a difference in every single game and Pogba just isn't doing that. Modern football has become so end to end that you cannot have players taking liberties and not tracking back or pressing. There are times when he doesn’t do that.

“In possession, he should be far more dynamic and demanding in his play. He is tall, strong, athletic, so should be bombing forward, attacking the space in front of him, having shots and making runs from deep to get into the area.

“In terms of being more demanding, I mean wanting to get on the ball, giving it and getting it back, and asking more of his team-mates.

Pogba was the only player from outside Manchester City (with six players) and Liverpool (five) to get in the PFA team of the year, which was announced today.

“I know Pogba’s in the PFA team of the year, but he wouldn’t get in the City team, not with Pep," Meulensteen says. "Yaya Toure could do brilliant things, but he ultimately wasn’t able to do what Pep wanted.

“He went missing for periods and couldn’t do the pressing or fast rhythm with the ball that was required. When Pogba gets going he’s fast, but he’s not light on his feet. With City, if you lose the ball, you have to win it back as fast as you can and then move it quickly."

Meulensteen says there's one other thing that counts against Pogba, which isn't totally his fault.

“He suffers from this languid style, he’s a heavy mover. In England especially, the fans want to say, ‘he might not have been great today but he gave it everything.’ Paul has that languid style and needs to learn to play with more of a spring in his step.

“The first thing that’s expected of anyone is attitude, energy and work-rate. Scott McTominay doesn’t have the same technical quality as Pogba, but he is a hard-working lad, so the fans have warmed to him.”

Pogba's languid style reminds Meulensteen of another player he worked with, at United, Fulham and the Kerala Blasters - Dimitar Berbatov.

“Berba had his own way and his own style and I got on well with him. But I remember one of his early training days at United. We did a a seven v seven and he complained to me afterwards about the style the others had played.

“I said, ‘if you could play any instrument, what would it be?’

“He looked at me like I was a bit crazy and then said, ‘the piano.’

‘I said, ‘See them,’ pointing at the other players, ‘they’re the best orchestra in the world. You can’t expect them to change to your tune. But if you complement them you can elevate the entire orchestra. It’s the same with Pogba - I think he’s playing his own tune too often. 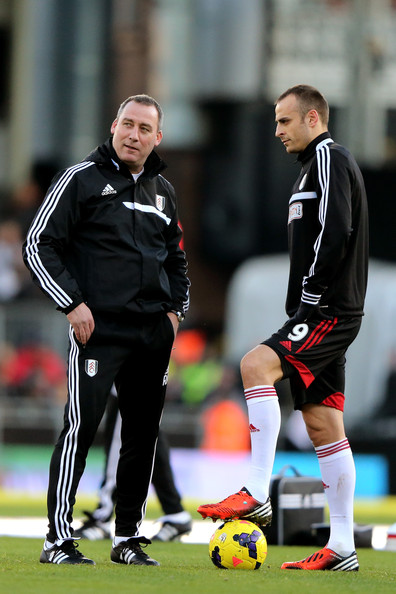 “Ole made it clear he wanted to build the team around him and he can still be the one who joins all the dots together.”