Mansfield physio steps down after being given weeks to live

MANSFIELD TOWN academy physio Matt Salmon has announced his retirement after being diagnosed with terminal cancer.

Salmon, who was told he had lung cancer in 2010, revealed that doctors had given him just ‘weeks to live’ in a recent consultation. The 25-year-old had been at the club for three-and-a-half-years, including a spell as first-team physio.

Salmon has led the academy's medical department, during which time it has acquired EPPP status.

He said: "I have immensely enjoyed every single moment since joining Mansfield Town, three-and-half years ago. Every single member of playing and coaching staff have been incredibly supportive of my situation and have always given me the opportunity to do the job that I love.

"It has been an incredibly difficult decision to resign from my dream job at the age of 25 but unfortunately I have reached a stage where I am not able to give our players the level of care they deserve, something I have strived to do since I joined the club and made a minimum requirement for all medical staff who I've had the pleasure of working with.

"I have worked alongside and for some incredibly talented medical staff, coaching staff and managerial staff since 2014 and every single one of them has played a role in shaping me to become the physio that I have become today.

"Personally and professionally I would like to thank all the staff working at Brooksby with the academy - every single one of you have provided support on so many levels and I will never forget the things you have done for me.

"I would like to specifically thank John Dempster (academy manager) and Mark Hawkins (co-youth director) for their support during the last two years since we started the academy. Their help, guidance and encouragement has been a massive comfort to both me and my family and has made the past few months that much more tolerable. 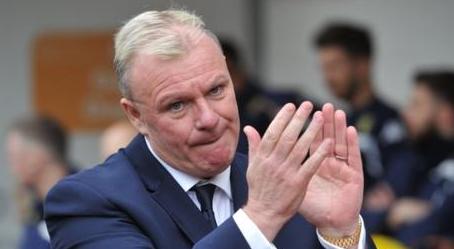 "I would also like to thank Steve Evans (manager) and John and Carolyn Radford (chairman and chief executive) for their kind messages since discovering the news.

“The fact that people who achieved so much in the game offer their time and support shows what sort of club Mansfield Town is and mirrors the principles that the town was built on.

"Finally I would like to thank what I feel is the best medical department in the League and the support you have all given me.

“Lee Taylor (fitness and rehabilitation coach), Dan Kett (head physio) Lizzie Read (sports therapist), Tom Chapman (assistant academy physio), Dr Prabu (club doctor) and I have progressed the department into one which demands the highest standards and will always look to provide the best possible treatment for our players.

“When I joined the club we had two full-time medical staff and when I leave, there will be a team of six.

“I think that shows the ambition the club has to go to the next level and I feel that under Steve Evans and his team, we will achieve our ultimate goal.

"I will finish by wishing the club, players, staff and fans all the best for next season and I look forward to the club playing League One football, which everyone at the club deserves."

Chairman John Radford said: “I learned this news with a heavy heart. Matt has always conducted himself with the utmost integrity, professionalism and has been a total credit to our Football Club. Both he and his family should be extremely proud of his work at Mansfield Town Football Club.

“Matt is a part of a tight-knit family at our football club and we are united behind him at this difficult time. He has fought this illness with an incredible spirit. We will miss him.”

Evans added: "In my time at the Football Club, young Matt has proved to be as good as any medical professional that I could wish to work with.

"When the news broke to me, in a week when we showed our support to a local boy suffering with a terrible illness, it's fair to say that tears were shed.

"Everyone at the Football Club send our best wishes to Matt and his immediate family, who will get the kindest support we can offer at this difficult time."

ANDY PARSLOW explains what his role as 'Restarts Coach' at League One AFC Wimbledon entails.