Luke Berry: Recovering from horror injury with 'run on the moon'

LUKE BERRY’S injury against Colchester on Good Friday was so bad that the game had to be halted for 12 minutes and the players sent to the changing rooms as he received treatment on the pitch.

The Luton midfielder had broken his fibula and badly dislocated his ankle and the ‘horror injury’ made national headlines. Most predicted the 26-year-old would be out of action not just for the rest of 2017/18, but for a sizeable chunk of the following campaign as well.

However, less than four months on, and with the first game of the season just a few weeks away, Berry is back in full training and in contention for a starting place against Portsmouth.

Head Physio Simon Parsell, who has been with the Hatters for nine years, says an anti-gravity treadmill purchased in June specifically to help Berry has played a major part in his recovery. Indeed, Parsell believes the Alter-G machine has knocked six weeks off Berry’s recovery time.

The treadmills work by diminishing the load exerted on players by reducing gravity, which is why using them has been likened to 'a run on the moon'. In essence, you're running as you would do on a normal treadmill, but without full bodyweight going through your lower limbs and joints.

This is achieved by something called Differential Air Pressure, which was invented by NASA engineer Robert Whalen in the 1990s. Whalen had been charged with finding a means of adding gravity so that astronauts could exercise in space, but his son Sean saw the commercial potential of 'flipping the air pump' and Alter-G was born.

The Washington Wizards were the company’s first customers, back in 2007, and you’ll now struggle to find an elite sports team that doesn’t have one of the treadmills.

Aylesbury-based SportMed Products are the exclusive UK and Ireland distributors and have recently released three new models – the Via 400 (which Luton have), the Via 400X and Pro 500. These include new features such as live video monitoring, pain recording, an assistant and symmetry assessment.

"It was a bad injury. I broke my fibula and dislocated my ankle, tearing five ligaments. I had the operation a week later and the surgeon reattached the ligaments and put a plate on my fibula.

I was walking on the Alter-G just six weeks after the op, even though I was still in my boot and on crutches. It allowed me to get the ankle functional and moving again.

At first, I was on 20% gravity and doing light walking. It felt foreign, because I hadn’t used my left foot since the injury. The air pressure lifts you up, so you’re on your toes. Then we put the incline on, so it balanced me out. I built it up to 30%, 40% gravity and jogging. Now I’m on 100% full running.

In the past I’d probably have started my rehab on the watt bike, but it’s just not the same. Ultimately, running is what we do as footballers and this built me up for what I needed to be doing. It felt right. 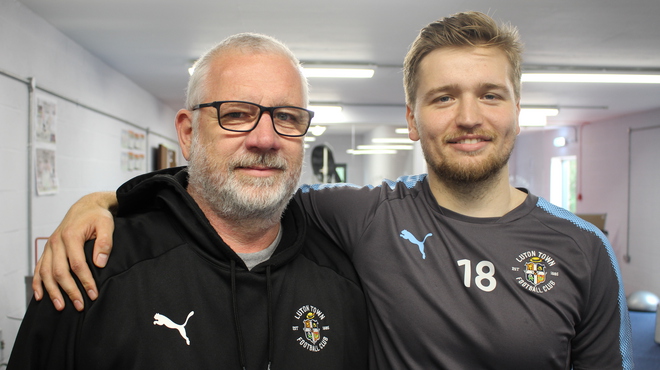 Without the Alter-G, I wouldn’t be as far forward as I am, no way. It got me miles ahead of where I should have been. Now I’m doing full running, a bit of ball work and changing direction. We’re going to Slovenia for pre-season and I’ll be in full training ahead of the season.

I don’t really have to go on the Alter-G any more, but I still do, every morning. In the mornings, it’s a struggle to walk to begin with, because my ankle stiffens up. The Alter-G gets it going.

I start at 80% gravity and go up to 100%. The other lads have seen what it’s done for me and will be using it for recovery too. If you have a game on a Saturday and are in on a Sunday, you don’t want to do anything too heavy. With this, you can put it on 50% gravity and do a jog."

"Eight weeks after quite extensive surgery, Luke was walking and then running on the Alter-G, which was amazing really. Into the 13th week he was back outside kicking footballs. I think we’ve reduced his rehab by a month or even more.

Without the Alter-G, we wouldn’t have been able to put full bodyweight through his leg and ankle. It enabled us to put the ankle through a full range of movement at a much earlier stage in his rehab, because we were able to unload his bodyweight.

To use it, the player basically steps on the treadmill, zips the pod around his waist and it calibrates his weight. You can go as low as 20% of bodyweight or all the way up to 100%. This adjusts the lifting force which is applied to unweight the patient. You can also perform close kinetic chain exercises.

We’re very lucky to have the machine and the board have been fantastic in investing in it for us. Initially, when I went to them and told them what it cost, there was silence, but when I explained the financial benefit of being able to return someone like Luke to play a lot quicker, they were fully behind it. 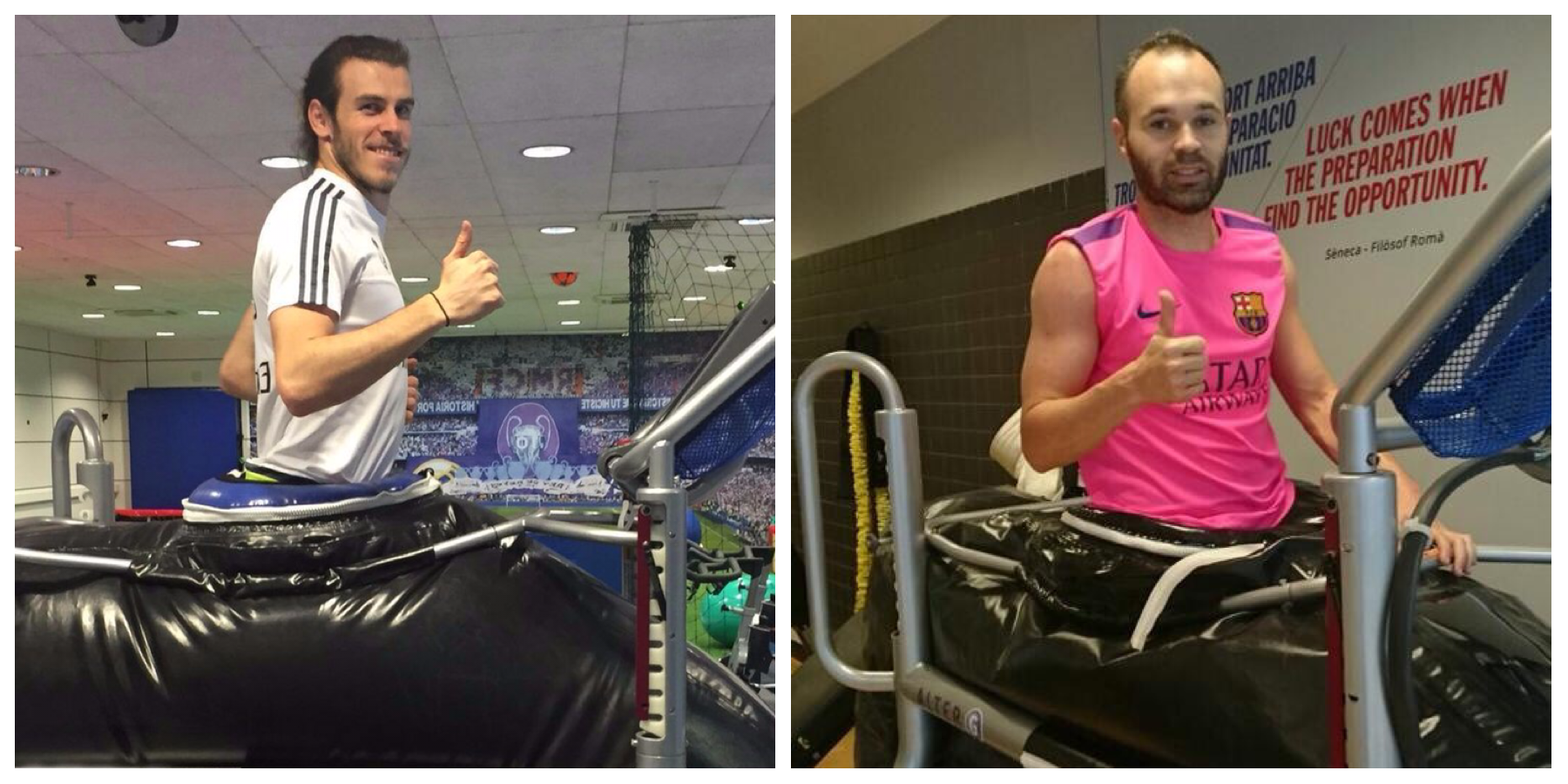 I’ve been here nine years now and the board are ambitious and supportive. If you can put a good case forward for investment, they’ll back you. The ambition is to get to the Championship and science and medical is a key part of the plan.

If you’re paying x pounds per week to an injured player, it’s going to be big value for money if you can get him back playing six weeks earlier than expected.

Having our own machine on site is a massive benefit, because otherwise we’d have to find one, travel to it - with a member of staff and the player - and pay an hourly rate for it. I think it’s more cost effective to have your own.

There are various packages and payment plans available and I know you can trade in an old machine if you’ve got one. We’re one of the first teams in the country to have this new Via 400 machine. Using the wifi, you can download live data, print it out, and get a clear picture of where the athlete is at.

On the touchscreen there’s a pain level section, so we can get the player to feed in what pain he’s feeling at a particular stage of an exercise. Also, the machine tells us symmetry, so we can have a look at step length, weight bearing, how much is going through each leg.

If there’s a big discrepancy between your fit and injured leg then we know we’ve got a way to go in the rehab.

Objective data is crucial for any medical department.

Without this you might just be using heart rate monitors for feedback: how fast did he run and how far. Now we have that plus so much more.

If Luke was to sustain another ankle injury, then I’ll have all the data to refer back to. The Alter-G also allows us to develop our own treatment protocols.

A session can also be filmed live and you can watch your running live or at the end of a session. The alternative would be to take a player outside and get someone to film him, which is tricky to do in practice and not as accurate either. This is a contained environment: you get an indication of how the player's foot is striking the floor, of whether he’s increased his speed and step length.

We’ve also now started to use the Alter-G in recovery as well as rehab. Last season, recovery meant either a session outside - which puts full bodyweight through the joints - or else sitting on a spin bike. To be honest, a lot of the lads get bored with that. They prefer to do football-related exercises and, at the end of the day, you don’t see many players on a bike during a match.

The Alter-G gets them running but puts less stress on the body."