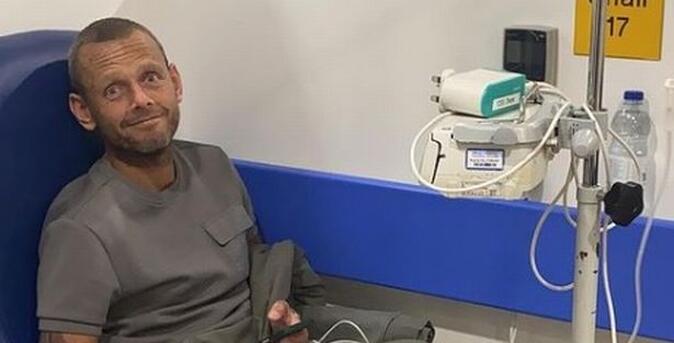 LIVERPOOL Under-18s coach Jay Spearing has revealed he was rushed to hospital on Christmas Eve with a life-threatening condition.

The 34-year-old made 55 appearances for the Reds as a player and returned to them in June as a player-coach with their Academy.

Blood tests by Liverpool's medical department revealed that Spearing was close to falling into adrenal crisis, which is a potentially fatal condition caused by a drop in cortisol levels.

Posting a photograph of himself in hospital on Instagram yesterday, writing: “My First Christmas off in 17 years was a little different than I expected. After blood tests with the club, on Xmas Eve I was told I needed to attend hospital urgently before my body starting shutting down.

“I was potentially hours/ days away from going into something called Adrenal Crisis. After more observations and tests were carried out they diagnosed me with Addison’s Disease.”

This is a condition where the adrenal glands (which sit on top of the kidneys) do not produce enough hormones.

"Most people with the condition have a normal lifespan and are able to live an active life with few limitations," the NHS website states.

Spearing added: “It’s took me a minute to get my head around it, but I am thankful that now it’s been diagnosed it can be controlled and managed through hormone replacement treatment, and it’s not something that I will allow to effect or dictate my life.

“Thinking back, I have been ignoring symptoms and changes in my body (a cracking tan for a start) for over a year, without it being checked. If it wasn’t for (wife) Jade Spearing for pushing me to get checked, after she described my symptoms to Rachel Williams (homeopathist) she insisted I get my cortisol levels checked.

“I really do owe a massive thank you to Rachel because if I hadn’t got this checked when I did things could have turned out very differently. Moral of the story - don’t ignore changes in your body, no matter how small. Get them checked out!”

Club captain and former team-mate Jordan Henderson was among those to wish Spearing well on Instagram.

After leaving the Reds in 2013, Spearing went on to play for Bolton Wanderers, Blackburn Rovers, Blackpool and Tranmere. The midfielder retired from playing at the end of 2021/22.

In addition to working as Liverpool's U18s coach, he has been registered as an over-aged player for their U21s.