The former Rangers skipper was appointed by Dundee United in January

The former Rangers captain was appointed in January, having previously managed Kilmarnock and been assistant at Lechia Gdansk in Poland.

McCulloch, who won 18 caps for Scotland, told TGG about his job, the importance of holistic coaching, the psyche of the modern player and his work on the Master of Sport Directorship course at Manchester Metropolitan University.

Lee McCulloch: For Scottish football, this role is rare. I didn’t really know it existed in football until I spoke to my former Rangers team-mate Michael Mols, who was strikers coach at Utrecht in Holland. When he told me about it, it made sense.

When I look back on my own career, I had good man-managers, but I didn’t have specific one-on-one coaching. Our manager here (Robbie Neilson) used to be a defender and wanted me to come in and do that specific work with our attacking players. So I have input during the main sessions - our playing philosophy is about creating chances, being entertaining and bringing the ball down - but the one-on-one work is very important.

You try and work on a player's strengths and make them better as an all-round package. We work on movement, game understanding, first touch, hold-up play, finishing. I’ve played as a striker, central midfielder, winger and defender, so would like to think I have decent game understanding!

The one-on-one work goes down really well with the players and perhaps that’s something we need to do more of in football. The coaching is more intimate, so you can really work on individual strengths and weaknesses and get into the minds of the players. They can share their personal goals and you can work out individual plans for individual players.

Coaching is a very different now to even five years ago. I’m not just there to work on technique, but to take a holistic approach. They do technical work, fitness work, testing, but mindset and wellbeing are also crucial, and what happens when they go home from the football club has a big impact on that too. You want them to be confident, happy, full of energy, eating properly and so on.

It really is about helping them to get the tools they need for football and for life, especially if they’re young players. You’re trying to create better human beings, not just better footballers. That means eating well, sleeping well, hydrating and, as a coach, you might need to help educate the parents as well.

As a coach, you’re there to impart your knowledge and experience and make players better tactically, technically, physically and mentally.

The days of command and control have long gone. You can no longer say, ‘This is what I want you to do, you’d better do it.’ Society has changed and football has changed. Young people want to have a say in what goes on and I think that’s a good thing. In football, the level of awareness and analysis has gone up so much, thanks to Monday Night Football and different websites and social media accounts and so on, so youngsters come into the game with a tactical and coaching perspective. I think we should embrace that.

The best thing is always to sit down and create a relationship with a player: find out what their thoughts and beliefs are and take it from there. Two-way communication and two-way responsibility.

Younger players are branded as having a weaker mindset now, but let’s look at it from their perspective. When I was playing with Glasgow Rangers, you were expected to win every game. It’s a worldwide football club and the pressure from the terraces and much further beyond was immense.

I might get it in the national newspapers - ‘he’s not good enough’ - but whether I chose to read them or not was my choice. Often I didn’t. Nowadays, players get messages direct to their Twitter and Instagram telling them ‘you’re not good enough’ - and a lot worse besides. That might also be seen by 25,000, 30,000 people or more. 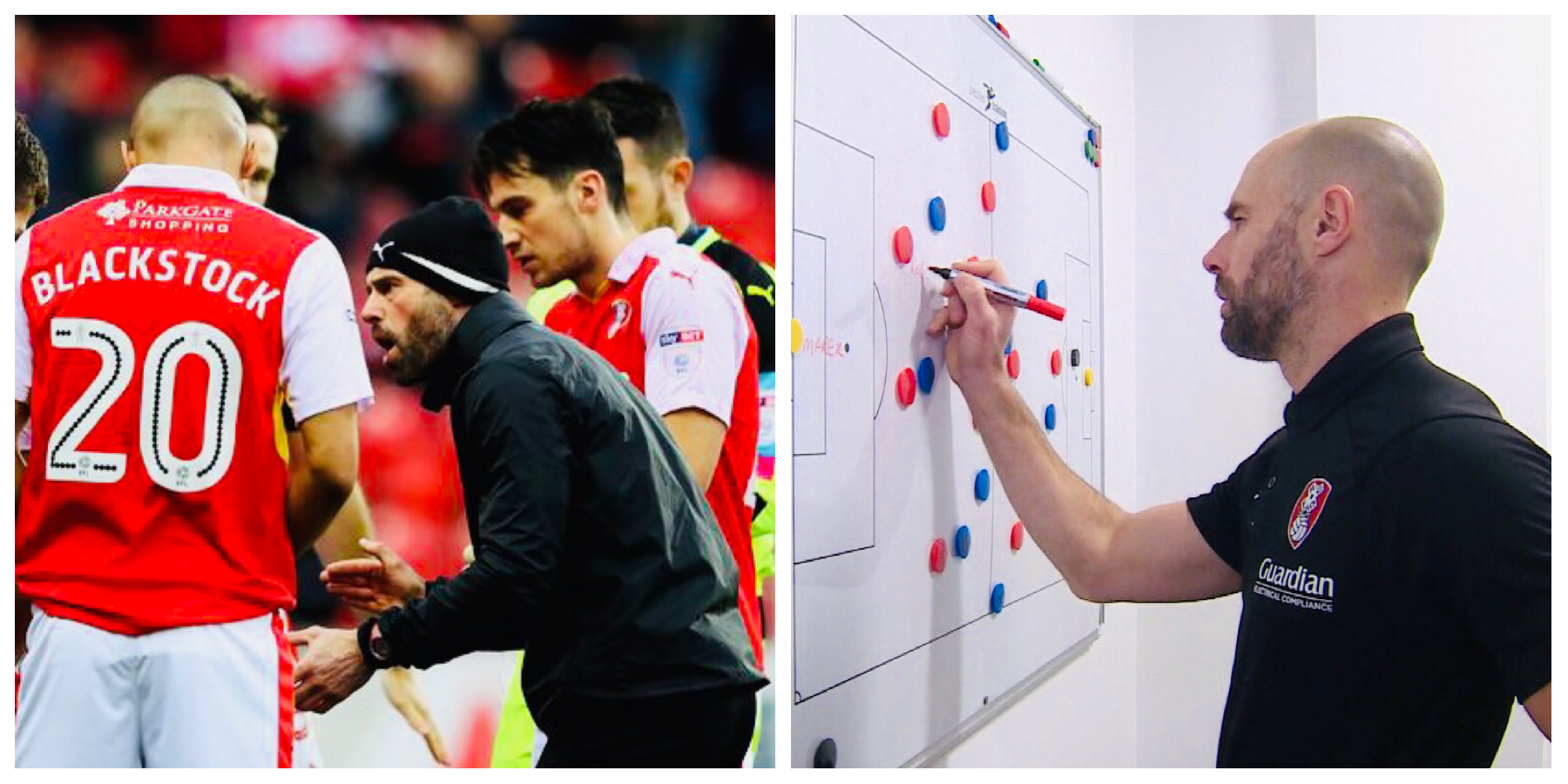 These are often teenagers we’re talking about. On the Sporting Director course at MMU, we’re doing a fascinating piece about neurology at the moment. We’re looking at the threat response, fight or flight, and how you produce dopamine when you get likes on social media. It’s like a drug. But, with that, there are the negatives of trolling and abuse and that can be harmful. Players are so accessible now and it’s about educating them in how to handle that.

You have to be mentally strong and be able to lean on your team-mates and your coaches as a player. If you don’t have that, it can be very easy for a player to go under. Sometimes, as a young player, you look up to your coach more than your parents, so we have a big responsibility. Having a relationship with the coach and being able to speak out and open up is really important.

LEARNING YOUR CRAFT AS A COACH

I’ve had a passion for coaching for a long time and got my Pro Licence while I was still playing. You need an understanding manager to be able to do that and I was very lucky that Ally McCoist allowed me to go away on the coaching trips. These club and manager visits you do are absolutely invaluable. I went to Ajax and AZ Alkmaar in Holland and saw other cultures and philosophies. Coaching is very different to playing and you have to learn your craft.

I was also lucky enough to spend time with Brendan Rodgers at Celtic. I’d lost my job at Kilmarnock (in October 2017) and Brendan phoned me the next day and said ‘I’d love you to come in for the day.’ I had breakfast with him and watched them train.

For a guy of Brendan’s stature to do that, when I’d played for Rangers as well, was a real mark of the man.

I was taken aback by how tactically aware he was, but also the work he did on mindset and the strength of the relationships he had with his players. That’s something I took away and try to put into my own coaching now.

The manager we have at Dundee United is also very forward thinking and willing to try new things, which is what I really like about him. It’s good to be around good people, in any walk of life. I also work closely with our assistant Gordon Forrest, who’s got a lot of experience, having worked in New Zealand and with the Vancouver Whitecaps in Canada.

I’ve got about eight months left on the course and am doing my dissertation on the role of the Sporting Director and how he manages up and down. I’ve enjoyed the academic challenge and the networking has been excellent too. You find yourself sitting alongside people you’d never have met otherwise - from rugby, cricket, swimming and outside of sport too.

Our Sporting Director at Dundee United, Tony Asghar, and our Managing Director, Mal Brannigan, were on the course too. That’s helped me, because I'd developed that relationship with Tony by the time I came here. He’s always there to offer help and advice if I need it and has experience on both football and business sides. He's a good person to learn from and is changing the culture of our football club.

I didn’t work with a Sporting Director at Kilmarnock (McCulloch was sacked after just eight league games in permanent charge) but would love to have. As a rookie manager, it would have made my life a lot easier. The Sporting Director brings continuity throughout the club, from youth levels to first team. He can take a strategic view, allowing the manager or head coach to get on with the day to day work of preparing and leading the first team.

If the manager has to go, which obviously happens, then the philosophy and strategy remain in place. It’s about creating a culture, an atmosphere, a philosophy, a vision, and we’re lucky to have that at Dundee United.

Too often a board will get a young manager in and if it doesn’t work out they will panic and say ‘we need to get experience in.’ The experienced managers are often called dinosaurs. It’s not about that though. The club should lay down the identity and vision and select a manager who fits in with that, irrespective of what age he is.

Transformations don’t happen overnight, but often people panic in football. I look at Norwich City, where there has been a steady build and a willingness to keep doing what they believe in under a Sporting Director (Stuart Webber). They finished 14th last season, so it took a certain degree of bravery to stick with the manager. They did and have come out the other side and now look what they’re achieving.