Athletic Bilbao were on top, with an amazing 55.8% of their minutes having gone to club-trained players (defined as those who had been with the club for at least three seasons between 15 and 21) up to April 19th.

Real Sociedad were second, with 43.9%, and Celta Vigo third, with 41.2%. Seven of the top 15 clubs were from Spain and, on average, La Liga sides had given 17% of their minutes to club-trained players. The Premier League figure is currently 12.1%.

In the last 15 years Spain have thrived on the international stage too, at both junior and senior level, so it looks like they're getting a lot of things right in terms of youth development.

They're not resting on their laurels though, as Juan Florit, La Liga’s Head of Football Projects, told TGG in an extensive interview.

In April, La Liga launched the ‘National Plan for the Optimisation and Improvement of Youth Academies’, which is a 10-year project designed to take youth development in the country to the next level.

“Usually you work on a project like this when the situation is negative," Florit told TGG, "but it is better to do it when things are good. We have the strength, the collective sense and the knowledge from La Liga clubs to improve even more.”

Florit has personal experience of being a youth player, having come through the ranks at Atletico Madrid before turning to a career in coaching at the age of 20. In 2015 he was appointed Head of Projects at La Liga and both his role and the department as a whole have developed significantly since then.

La Liga's National Plan for Academies looks ahead to the next decade of youth development in Spain and will be in three phases. The first runs to the end of 2024/25.

Florit is eager to emphasise that the Plan was formulated by all 42 La Liga clubs, both first and second division, rather than the league itself.

“But, little by little, we are breaking down the walls in La Liga. When we launched the plan we did it at Osasuna in two days. On the second day, their Academy Director, in front of the 41 other Academy Directors, explained their model, methodology, processes and how they train the players. 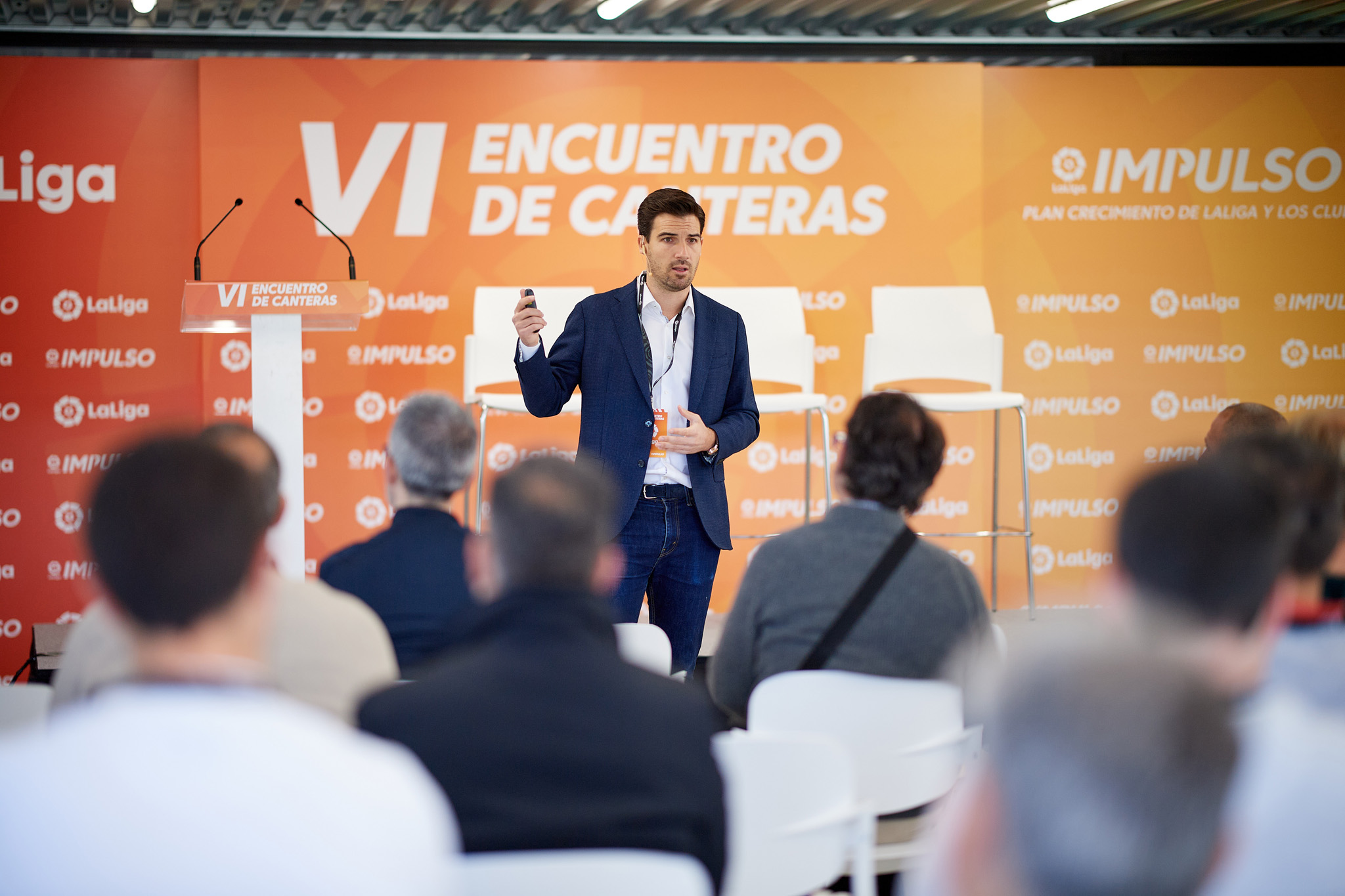 “After that the Academy Directors have arranged visits to each other. This is unprecedented and it is very powerful.”

The starting point for the Plan was six years ago, when La Liga arranged its first Congress of Academy Directors.

“That was the first time in history that we had organised such a Congress and from that moment we started to ask them about the main challenges they had to face in their daily work and how La Liga could help them,” Florit (pictured above) said.

“From that point, we started to establish some priorities, starting with some very high-quality training for staff in the Academies, which was a project we started in 2019. This wasn’t enough though.

So, what exactly is the plan?

There are five main areas, each with its own set of KPIs:

1. Infrastructures and resources: Recommendations for investment in infrastructure, such as the improvement of training centres and technological tools. LaLiga will make resources available to clubs, such as the LaLiga Academy Manager software, created by its technology subsidiary, LaLiga Tech. Use of technology and Big Data will be promoted among the youth teams.

2. Comprehensive player care: Emphasises the need to approach player training from a holistic and not just a sporting perspective. Particular attention to be paid to academic and personal development, as well as psycho-social and mental health care. Targets set with each club, eg for the number of youth players studying at University or High School. This builds on LaLiga’s 2019 ProPlayer programme, which offers scholarships to Academy players so they can combine sport and study at Universities in the USA.

3. Development and transition: This will be a key measure of the success of the plan. Indicators have been set for long-term success, such as the number of homegrown players making it into first teams, players called up to national teams and those playing for clubs in the top five European leagues.

4. Training model and transition to competition: Clubs are required to have their own established philosophy and training approach to “guide the activity and development” within the Academy.

5: Structure and professional development: The professionalisation of Academies through more demanding requirements in terms of training, specialisation and stability of technical staff. This builds on the LaLiga Training Hub, which provides “collective intelligence” and “interaction” between the staff of the 42 La Liga clubs.

EXEMPLARS AND MEASURES OF SUCCESS

England's EPPP, which was introduced in 2012, had been an inspiration for La Liga, though not necessarily a template.

“The EPPP has been a reference for us and we have had meetings with the team from the Premier League and learned a lot,” Florit said. “It’s true that the situation in 2012, when EPPP was launched, was a lot different to the situation we have now in Spain. 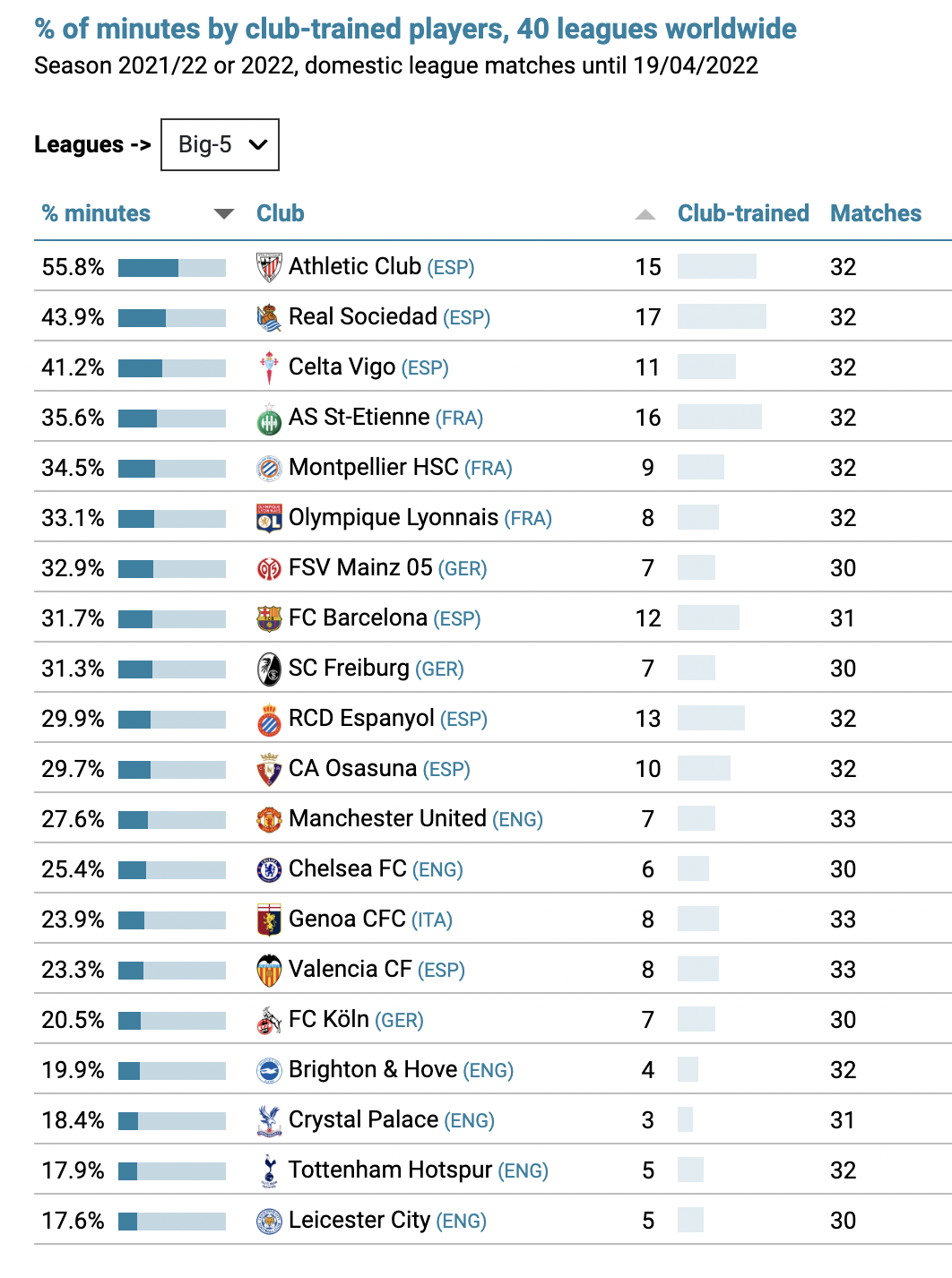 "English youth football was not in a good moment, but they were pioneers, the first doing this kind of project, and it is amazing to see what they have done. Ten years on the results are very good and it is a reference for everybody.”

There are also plenty of examples of best practice from within La Liga itself. The second area of the Plan, 'comprehensive care for the player', has been a particular focus and Real Sociedad are an exemplar.

“We have KPIs and objectives to make sure every club has a plan - agreements with schools, Universities and so on,” Florit explained.

“We like this idea of a dual career and will give support from La Liga for that. We have also set some targets for percentages of players that have to be in High Schools at the ages of 16, 17 and 18, and studying in Universities or colleges after 18.

“We want to make sure we don’t have players at 16 and 17 who are only playing football and nothing else. That applies even if he is a very good player and the club think he can reach the first team. There has to be a parallel alternative in another professional pathway other than football.

“Bilbao and Sociedad, the two big clubs from the Basque country, are amazing in terms of young players and Academies. They take a lot of care of the players in the academic way.

“Sociedad have a very big percentage of players in the University (of San Sebastian), even in the first team. Sociedad have also been always in the top five, top six of La Liga and have done well in Europe too.

"Focusing on Academies and taking a holistic approach makes sense in a sporting sense and from a business point of view as well. The clubs realise this.”

Florit and La Liga also want to improve the way in which they measure the success of their Academies, which is something we’ve focused on on TGG.

“This is one of the things we will do with this plan - measure the productivity of Academies in terms of the players going on to first teams, in La Liga and also the top five leagues in Europe, as well as onto international football.

“But we want to look at other measures too, because this is not the only measure of success for an Academy. Sweden is a system we have studied and we have a very good relationship with our colleagues from the professional league there.

"They have a number of measures of success, not just productivity, and this is something we are looking into with the Plan.”