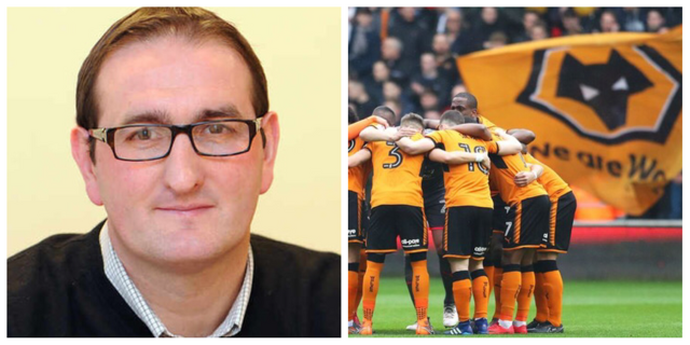 Thelwell is celebrating a decade at Wolves

MUCH of the credit for Wolves' promotion to the Premier League has understandably gone to Portuguese manager Nuno Espirito Santo.

But Sporting Director Kevin Thelwell, a man we seldom hear of or from, has arguably been just as important. Thelwell has held his current position since September 2016 and first moved to Molineux as Academy Manager in April 2008, meaning he is now celebrating a decade at the club.

In a fascinating interview with OptaPro's Three at the Back podcast, he explained what he does and what the future looks like for the club:

WHAT DOES A SPORTING DIRECTOR DO?

KT: On the Continent there’s a much clearer job description for the role. In England, clubs tend to try and organise it on the basis of what they need.

You’ve got a lot of different titles - Director of Football, Head of Football Operations, Technical Director, Sporting Director. At Wolves, the way it’s always operated is that the head coach - not a manager - has a clear focus on the organisation and preparation of the first team and performances and results.

The Sporting Director has responsibility for all of the operations that support that process. So, in my remit, I have Academy, coaching, performance analysis, medical services, sport science, recruitment. On a day-to-day basis, my first port of call is contact with the head coach, having conversations about what the day looks like and what’s going on. Then it’s about supporting all the heads of department to become best in class.

Recruitment is a big part of the Sporting Director role, because it’s the biggest spend and the biggest opportunity for people to support or criticise what you’re doing. As soon as a signing crosses the white line, everyone looks across the rows of seats to me in the stand and either says, 'that’s a fantastic decision,' or 'I’m not sure it’s so good'.

The role of the Sporting Director is to manage upwards, downwards and sideways. Managing upwards, because we have to understand that owners have huge pressure to succeed. They are spending a lot of money and want to see a return for that investment. You are always trying to find ways for them to take a more stable, consistent view on the life of a football club.

You have to try and find a way of gaining their trust and making things very stable.

The head coach obviously needs a lot of support - and to understand that you are there to support him. Then of course you have all the heads of department trying to make their programmes as good as they can be.

We have regular meetings where we are all together, so people know what others are doing and can unpack problems. We also have individual meetings and staff can make me accountable as well. You get the best from people if they feel they have the opportunity to be heard and find solutions. My view on developing a club philosophy is you’ve got to live it and your staff have to believe in it and live it too.

You’re only as good as the people around you and the people you appoint. For example, I work very closely with the club secretary (Matt Wild), who is very strong on football administration. I work hard on what the budget should look like, in terms of head count and detail. I lean on him to translate that into a beautiful spreadsheet! He’s certainly a lot stronger on those elements than I am.

WHY ACADEMY DIRECTOR IS PERFECT PREPARATION

(Thelwell joined Wolves as Academy Manager in April 2008. He was promoted to Head of Football Development and Recruitment in 2013 and then to Sporting Director in September 2016).

KT: The Academy position was the perfect springboard for me to take the Sporting Director role at Wolves. It helped me massively, because I knew all the players and staff at every level. Youth development has always been a big part of the plan at Wolverhampton Wanderers, all the way back to the 1950s.

We try to have a very joined-up approach at Wolves, where we operate as one football department, but at a lot of places, it’s almost a club within a club. So as an Academy director, you will be picking up the skill-set you need as a Sporting Director, because you’re looking at sport science, medical services, player recruitment, coach training, staff development and so on. It is the perfect way in for any aspiring Sporting Director.

We did a couple of things when I moved from Academy Manager to Sporting Director to try and align things even more strongly. We created job descriptions for heads of department that had Academy as well as first team responsibilities. We had just been relegated to League One in 2013/14 and had to find a way of reconnecting with the fans and creating a young, hungry, vibrant team epitomising everything they wanted to see.

Fosun are an investment group and they’re business minded. In the Premier League, they don’t want to be continually spending £40 or £50m on a player. They want to have younger players we produce ourselves who are part of a strong succession plan. The key is making sure the first team is as strong as it can be but also looking to the future.

Developing players is really difficult though, because there is so much going on with young people: maturation, home life, social life. You have to apply patience.

KT: We are currently in transition at Wolves. We’ve gone from a very British owner in Steve Morgan to Chinese ownership in Fosun. Understanding that culturally and finding shared philosophies and a message for the fans, players and staff is really important. It’s an exciting project.

We are in our second season with Fosun and this season has been excellent, without question. Everybody would say there are cultural differences, because we had been operating in a particular way for a long time. It’s been a difficult experience at times, but also challenging and rewarding to find common ground we all agree and believe in. We’ve created a very solid cultural platform and football philosophy.

HOW DOES THE CLUB MEASURE SUCCESS?

KT: One of the measures is who gets through to the first team. We are trying to look at player progress through all the age groups: are we identifying the right players, developing them and keeping hold of them? Player savings gets overlooked a little bit too. If we have a squad of 25 and six are from the Academy, even if they are not in the 11, that’s still a huge saving in terms of salaries and transfer fees. Our Academy is always trying to break even.

There is a softer side as well - player and staff development. We should be developing young people: to be successful at our club, at other clubs or in sport in general. You have to enjoy seeing young people get better. You also have an important role to play as a football club in the local area.

(Thelwell was asked about the influence that super agent Jorge Mendes has on the club at the EFL Awards on Sunday night. Fosun own 20% in Mendes' company Gestifute. Several Championship clubs have raised concerns about the relationship).

KT: Jorge is an agent just like any other. We’ve taken some of Jorge’s clients but also taken clients from other agents. My perspective on it is we haven’t broken any of the rules, we are very clear on that and the EFL suggest we are very clear on that and Jorge is an agent that has helped us to improve the squad, just like some other agencies have.

All I can say is that we were very clear on what the plan would look like in that second year. In the first year our recruitment didn’t go so well and there was not so many people talking about us then. In the second year we managed to pull it all together.

We took some risks, Ruben Neves would have been offered to a number of people - not just Wolverhampton Wanderers, as would have some of the other players. You can’t take away from the players like John Ruddy, on a free from Norwich and Ryan Bennett, on a free.