Davies is a qualified Sporting Director

A FEW months before Ken Anderson began his disastrous tenure at Bolton Wanderers, Kevin Davies was involved in a consortium that attempted to buy the club.

Ultimately, their business plan wasn’t quite right (Anderson’s obviously wasn’t either), but their intentions were, according to the former Trotters striker.

“Ever since Eddie Davies put the club up for sale, Bolton have needed to get the right owner in - not just someone with money, but someone with heart and soul and passion for the club.

“I was in talks with (former Bolton team-mate) Stelios Giannakopoulos and a company in North America and did quite a bit of work and spoke to the club on their behalf.

“Unfortunately, the business plan wasn't acceptable to the EFL at the time, so it fizzled out. I knew how the club operated, I understood the fans and had been captain there for five years and a player for 10.

“I’d always hoped my football career would end at Bolton and that I’d progress to a coaching role there, but that didn’t transpire. I’d seen this as another way of helping the club.”

The 42-year-old now lives in Poole in Dorset with his wife and three children and has looked on with sadness as the club has imploded in recent months, failing to pay its players, unable to fulfil its fixtures and relegated to League One. It’s especially difficult for Davies to watch when he remembers how good things can be at the club.

“Football is about creating memories and achieving something special as a group of players, staff and fans. We had eight or nine really good years in the Premier League and in Europe as well, playing the likes of Bayern Munich and Atletico Madrid - and beating them too. It was special."

BIG-NAME SIGNINGS AND A HUMAN TOUCH

Davies, who won one cap for England, believes Bolton’s demise can be traced back to one event: the resignation of Sam Allardyce as manager in April 2007. A few weeks later, the club were to finish seventh in the Premier League and qualify for Europe for the second time in three seasons.

It was the fourth consecutive season that they'd finished top 10 - a feat matched only by Manchester United, Liverpool, Arsenal and Chelsea.

“Sam left because the club didn't match his ambition," Davies says. "The chairman was saying that qualifying for Europe wasn’t great for our league chances. The club never really recovered from Sam's departure.

“The backroom staff was gradually dismantled, the recruitment of managers wasn’t right and you have to question some of the big signings. We started sliding and suddenly it became about surviving, not thriving.”

Allardyce may be lampooned now, but Davies believes he had a "genius" for allying clever recruitment with cutting-edge sports science and exceptional man management. 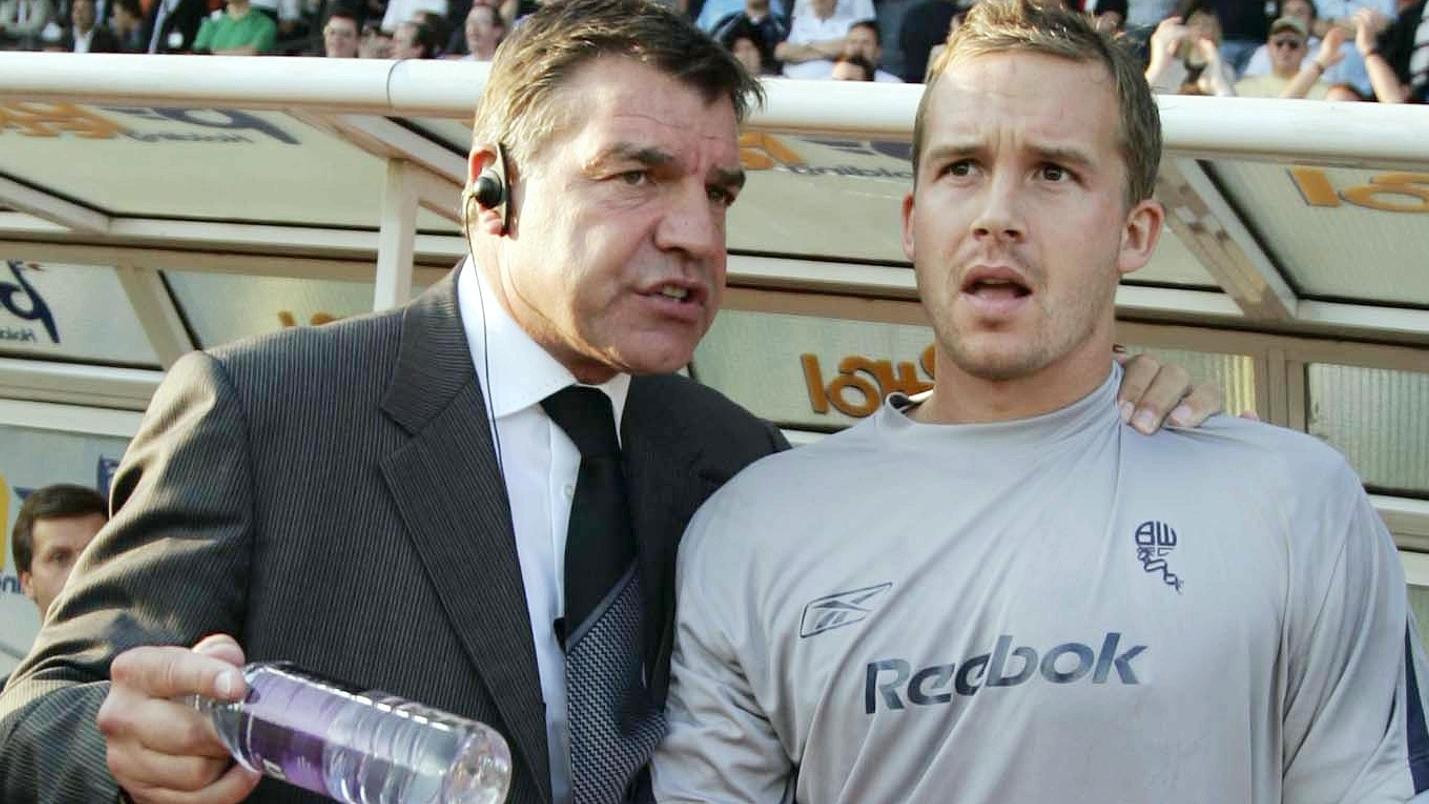 “At one point we had 18 different nationalities at the club and some of them had played at the very very highest level,” Davies remembers. “Stelios Giannakopoulos had won the Euros with Greece, Youri Djorkaeff had won the Euros and the World Cup with France and Ivan Campo had played a lot of games for Real Madrid.

“But, I tell you what - I speak to them and they still talk about their time at Bolton. Stelios has kept a house in the area and comes back every year, around Christmas time.

“He gets a bus to a game with the Bolton fans and visits some of his old team-mates. That tells you everything you need to know. Everyone felt a part of something special, no matter the heights they'd hit before.

"As you get older, you realise it’s not the money but the little things that matter in life.

"It’s that extra bit of thought and effort that means a lot. Sam was brilliant at that. All the wives got flowers on their birthdays, there were Christmas grottos for the kids and a couples’ dinner once a month for staff and players.

“I remember one trip to Dubai, after we'd been knocked out of the FA Cup, and I lost my passport the night before and missed the flight. When I got out there, a day late, Sam made me take all the staff and players out for dinner and was ordering champagne for everyone on my credit card. We worked hard but had fun and a lot of laughs.”

The recruitment of foreign stars began with Djorkaeff in 2002.

“No disrespect to Bolton, but Sam was clever, he met Youri in Paris and sold him this vision. Once Youri was on board, others followed - Campo, Jay-Jay Okocha, Fernando Hierro, Nicolas Anelka.

“We had a core of British players - myself, Kevin Nolan, Nicky Hunt - and that was allied with foreign charisma and flair. It wasn’t all big-name signings, either. Look at a player like Radhi Jaidi. Few people had heard of him when he came over from Tunisia, but he was strong, athletic, good in the air - perfect for the Premier League.

"When Anelka and El Hadji Diouf came in, people worried they might disrupt the dressing room, but they were never allowed to. They got their heads down and did well."

Allardyce put together a backroom team that went on to become industry leaders. Mike Forde was Performance Director, Mark Taylor the Head of Sports Medicine, and Andy Barr and Andy Renshaw were physios.

“Sam wasn’t afraid to surround himself with people who knew more than he did in their own area of expertise," Davies says. "He wanted the best people around him to help him succeed and empowered them to make decisions.

“Cryotherapy, beetroot shots - we were doing all that in 2003, years before they became fashionable. We had heart-rate monitors on for training, our diet was spot on. During the international breaks or off-season, our staff were off around the world to find marginal gains - going to Korea, China, Japan, the NFL, NBA, finding out about best practice.

“As a player, who were set targets at the start of the season and after every 10 games you’d sit down with Sam and Mike Forde to go through your stats and see how you were progressing.

“I remember the first one of those meetings I had. Sam said ‘You’re involved in 82% of our goals - fantastic. But you can add more to your game, you can score more goals.’ I walked out feeling like a million dollars but knowing I could still improve.”

A few months after Allardyce departed, Forde left for Chelsea and now runs his own performance company in the United States. Renshaw later went to Liverpool, Barr to Manchester City and Taylor to Newcastle United.

Davies went on to complete a decade at the club, although his exit wasn’t as he’d hoped. In March 2013, the club announced he wasn't to be offered a new contract and the striker didn’t feature for the team again. His relationship with manager Dougie Freedman had been deteriorating for a while.

“Under Dougie it had felt sterile, like the heart and soul of the club had gone. Even things like the staff being in the tunnel on a match day went. I did a bit of coaching in the Academy but there was never a conversation about going forward, which was disappointing.”

In July 2013, the burly forward made the short trip north to Preston North End and played in their League One play-off final win over Swindon in 2015, before hanging up his boots.

After that he had a short stint as manager of National League side Southport and completed his studies on the Master of Sport Directorship course at Manchester Metropolitan University, meaning he is now a fully-qualified Sporting Director.

“The course was quite overwhelming at the start, because of the quality of the people in the room. I was just a former player with a BTEC, which was all you had to do as a YTS back in the day.

“But gradually my confidence grew and it was fascinating to go into clubs like St Helens and see how they operated. I also learnt a lot from fellow students like Gary Bowyer, who I’ve stayed in touch with since.You learn about yourself, too, your strengths and weaknesses. Doing some of the 5,000-word dissertations were tough, but the overall learning experience was fantastic.”

His time as Southport manager lasted only six months, with Davies leaving in April 2018.

"I threw myself into it," he says. "The club had a bit of ambition and i enjoyed getting my hands dirty and getting stuck in. I was working 15 hour days, cleaning the training ground, travelling, scouting, cooking. Overall I think I did a decent job."

Now he's ready for the next stage of his career, with a few strings to his bow - a former Premier League player with managerial experience and qualifications as a Sporting Director.

"I'm open minded about what I'll do next," he says. "And whatever it is I know I'll throw myself into it."

He's sure to take a few lessons from Allardyce with him too.