TELESTRATION - the ability to draw on stills or moving video - has been growing in popularity in football for several years.

The technology, which was initially popularised within sports broadcasting by market leaders such as PIERO and Coach Paint, provides performance analysts with the ability to manipulate game footage to deliver meaningful tactical and technical information.

However, to date, there has been little published research about the efficacy of telestration tools within sport. This is what I and my fellow authors - Steve Rands, Head of Performance Analysis at Nottingham Forest; Michael Bateman, Lecturer at the University of Worcester; and John Francis, Senior Lecturer at the University of Worcester - set out to put right.

Our research article was published in the Sports Innovation Journal and is open access for everyone. Our findings were interesting and provided support for the use of video telestration within the analysis process, with 30% more information being recalled by those who used the technology in the research compared to those who did not.

The purpose of our study was to explore the effectiveness of video telestration in aiding memory recall of information among professional male footballers. Our sample comprised of 14 players from the English Championship who covered a range of outfield positions. We held a randomised controlled trial with five sessions in 15 days with two groups, who were:

Each group had at least two players with more than 10 years of professional playing experience. Each session was conducted every three days to mimic typical levels of fixture congestion in professional football.

After watching the telestrated or non-telestrated clips, each player then completed a questionnaire 24 hours later. This was made up of questions regarding possession, chances created and set-pieces. 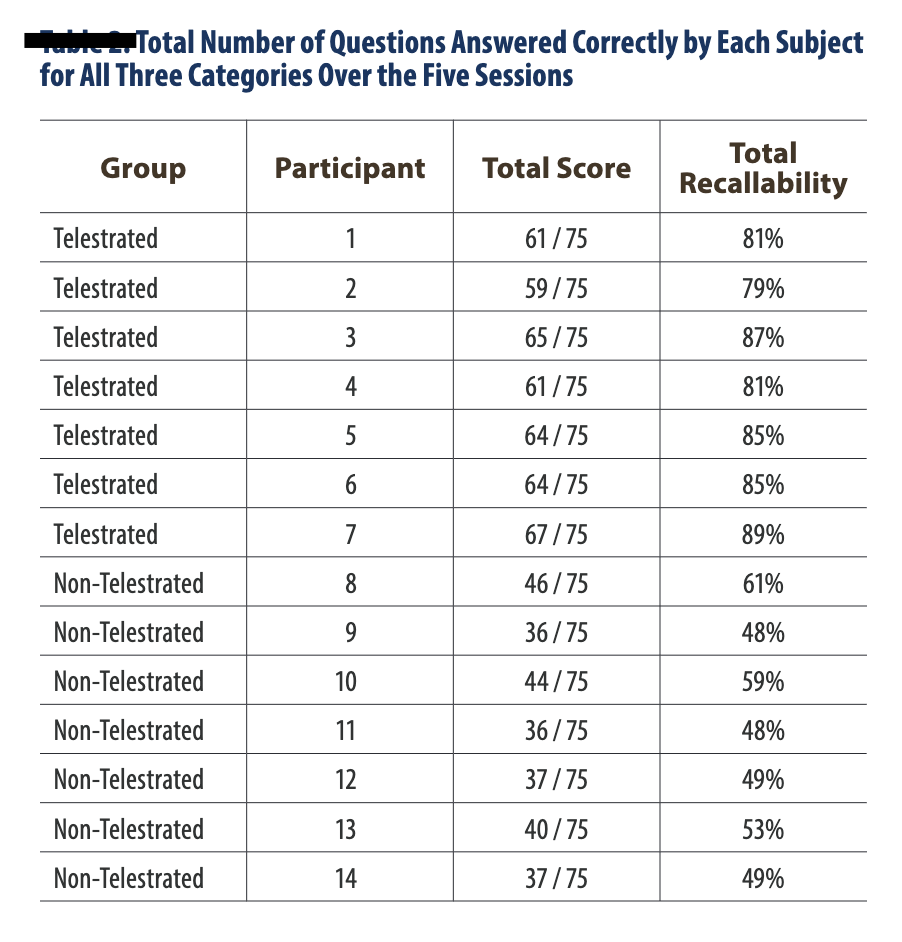 We conclude that embracing and incorporating such new and innovative technologies is crucial in developing successful analysis processes. Based on our research, telestration holds considerable promise within both the performance analysis and coaching professions.

Building buy-in from the target audience, breaking down cognitive barriers to player learning, as well as longitudinal use are just some of the benefits of using video telestration within performance analysis. 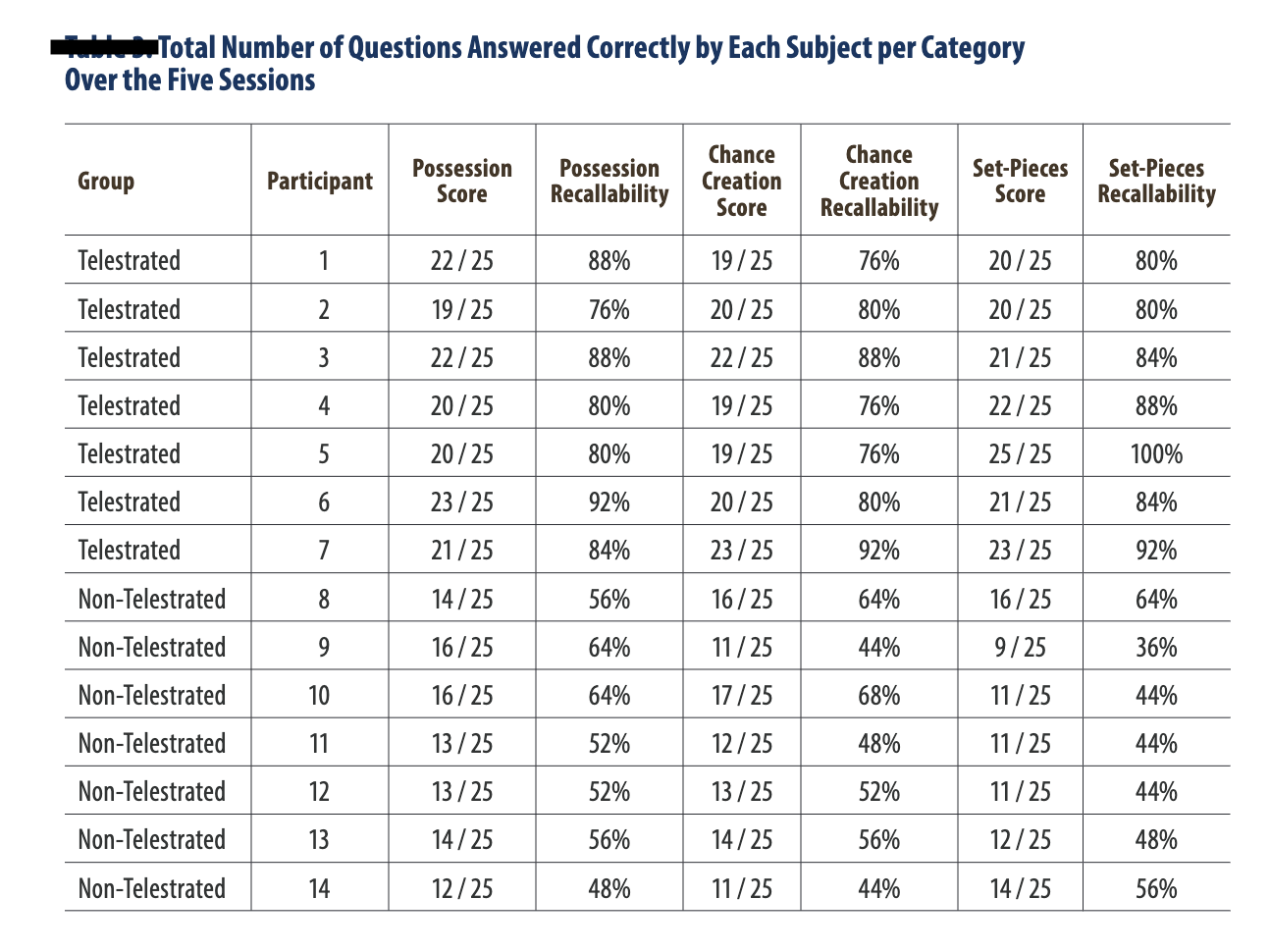 One of the article’s authors, Nottingham Forest Steve Rands, has successfully adopted such an approach in numerous performance analysis departments, from Manchester City to three play-off finals with different clubs in the Championship.

As authors, we also identified three key trends that we believe could impact not only performance analysis but also coaching pedagogy moving forward:

In a world a world which is becoming increasingly populated by Gen-Z athletes, understanding your audience is vitally important in being able to effectively deliver meaningful and memorable messages.

This is especially important when you consider that teams are often competing every two to three days, meaning much of a player’s preparations will be undertaken inside analysis meeting rooms. This precious contact time between players and staff needs to be as effective and efficient as possible – and video telestration can help achieve this.

Having been exposed constantly to technology, Gen-Z athletes have been characterised as having shorter attention spans and enhanced multi-tasking capabilities, as well as a preference for short, simplified and visually engaging pieces of information.

Video telestration satisfies the Gen-Z athlete because of its visual and augmented format. Not only can it benefit the collective in a pre-match setting, some telestration tools now have the ability to telestrate clips remotely on a tablet. This could be beneficial for individual player development by putting the power in the hands of the player during a one-to-one meeting, enhancing their engagement and maximising learning outcomes.

Our research demonstrates that video telestration meets these educational demands, with players’ ability to recall information significantly enhanced by this visually-stimulating format of learning. Players were more visually engaged and subsequently able to recall more key events than those who were not exposed to video telestration.

With this in mind, it would be prudent of coaches to incorporate video telestration in their coaching processes to individualise and evolve their approach to meet the educational demands of athletes they are coaching.

This visual form of learning may not only be beneficial in fulfilling generational learning preferences, but also for breaking down the language barriers that are often prevalent in modern dressing rooms. In this season’s Premier League, for example, more than 65% of players are foreign nationals.

A mismatch of languages, paired with cultural player and coaching differences, may increase the likelihood of miscommunication between staff and players during the pre-match process. This can then potentially cloud match-winning information.

By providing players with visual learning aids, video telestration can help form connections and cognitive cues to help transfer information from the dressing room onto the field of play.

This is evidenced in our research, which indicated that telestration limits variations in total levels of recall between players. For the group that experienced telestration, their answers were more tightly packed together, whereas those who did not experience telestration had more varied responses.

With games often being played every two to three days, there could be an argument for a ‘less is more’ approach with video telestration, so that players are not inundated with too much information.

However, our research indicated that the quality of information should still include video telestration for the learning benefit of the players.

Over a period of five sessions, there was no notable negative impact from the long-term use of video telestration. The methodology mirrored typical fixture congestion, with players being shown video clips on day one, provided a questionnaire on day two and having until day three to successfully recall information and complete the questionnaire.

While it may not be practical to telestrate ALL clips shown to coaches or players, our research advocates the telestration of key points in order to enhance their recall.

Limitations: First, a larger sample of players would help increase our understanding of the use of telestration. However, the data yielded from the research indicated statistical significance, despite only 14 players partaking in the study.

Additionally, the average age of the players (25.3 ± 6.7 years) encompassed players from both Millennial and Generation Z backgrounds. Currently, Gen Z athletes account for 27% of the world population, with this number only increasing in the years ahead. It would have been prudent to select a primarily Generation Z sample so that results could be generalizable to future

Future research: it would be prudent to investigate the ideal number of annotations to include when telestrating footage, particularly when you consider the importance of player engagement as a performance analyst while also maintaining a high level of education.

As well as this, assessing the effects of coach feedback when supplemented with video telestration would be an interesting avenue to explore. Furthermore, studying players within an Academy setting could be a useful and beneficial addition to current processes.