JURGEN KLOPP has described it as the “most senseless competition in the world of football”.

Following Liverpool's 0-0 draw with Manchester City on October 7th, Klopp lamented the fact his players had to then go away for the Nations League. "We have to start thinking about the players," the German said.

Although some friendly matches are still being scheduled in international breaks, the new Uefa Nations League has essentially replaced them. This may be great news for national coaches, who can prepare players for meaningful matches, and for fans, who can watch games with something at stake.

But is it bad news for club owners, coaches, medical staff and, perhaps most importantly of all, for the players themselves? That's what we set out to discover with our research. 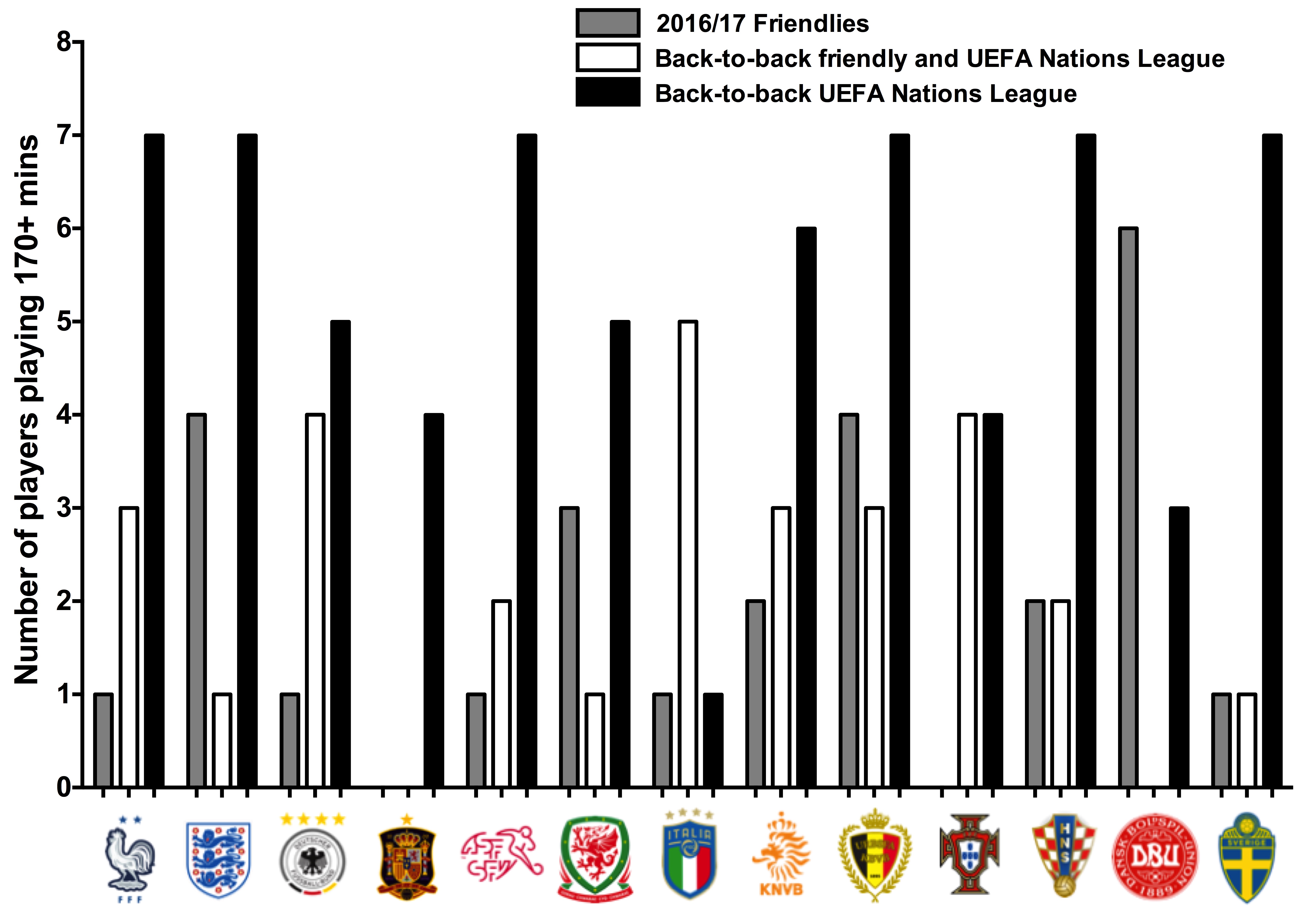 There have now been six rounds of the biennial Nations League, with games arranged back-to-back during three international breaks in September, October and November this year.

We took each of the 13 European teams in the top 20 of the Fifa world rankings (Belgium, Croatia, England, France, Germany, Holland, Italy, Poland, Portugal, Spain, Sweden, Switzerland and Wales) and analysed data from two of their back-to-back Nations League matches.

This data was then compared with back-to-back friendlies played by the same countries in 2016 or 2017. Although the Nations League has not increased the total number of matches being played by national teams during a calendar year, it has significantly increased playing time for many.

What we found was that there was a 269% increase in the number of players completing more than 170 minutes during the back-to-back games (out of a possible total of 180 minutes, excluding injury time).

This would likely have been even higher, had it not been for the fact that Denmark and Portugal had already won their respective groups before the final round of fixtures, meaning they were able to rest players.

Even when a Nations League match was played back-to-back with a friendly, we still found a 68% increase in the number of players completing more than 170 minutes.


This increase in playing time can be explained with one word: substitutions. As Nations League matches are official competitive fixtures, teams are only allowed to make three substitutions per game (although an additional sub is permitted in extra time in the play-off rounds), whereas they could make an unlimited number in friendlies.

Furthermore, the back-to-back Nations League games were only separated by two days, meaning less than 72 hours’ recovery time. Recent research has shown that muscle injury risk increases by almost 20% when recovery time is reduced from six to three days.

Fixture congestion and insufficient recovery time between matches are two of the major risk factors associated with injuries.

Ideally, players should have at least 96 hours between matches in order to recover fully.

When further investigating the players who had completed more than 170 minutes in the back-to-back Nations League games, we discovered that 75% had also played 90 minutes for their clubs in the matches both preceding and succeeding the international games.

Of these players, 51% then played a Champions League, Europa League or league match the following week as well. This meant they had five matches in less than 20 days - or, in some cases, only 16 days.

Eric Dier played five matches in 18 days for Tottenham and England, with 90 minutes against Cardiff (October 6th), Croatia (12th), Spain (15th), West Ham (20th) and PSV Eindhoven (24th). His team-mate for club and country, Harry Kane, also played those five fixtures in 18 days (although he came off after 87 minutes against West Ham.

Fixture congestion does admittedly happen at other times of the season, but the Nations League has made it more common.

As we are in the inaugural year of the Nations League, it will take a number of iterations before a ‘critical mass’ of data is available from which to deduce whether the competition has increased the risk of injury compared to friendlies.

And there are clearly benefits to this new competition, as outlined at the start. We just need to ensure that the health of players is not the price that’s paid for them.