CHELSEA’S Academy was the venue for the Premier League to unveil their report on a decade of the Elite Player Performance Plan (EPPP) yesterday.

The choice was easy to understand because, in many ways, Chelsea are the standard bearers for the modern English Academy system. They moved into their state-of-the-art Cobham facility in 2004 and now have a pipeline of young players into the first team.

Chelsea's Head of Academy is Neil Bath, who was promoted to Director of Football Development and Operations earlier this week, and who joined the club as a part-time schoolboy coach in 1993. That was back in the days when the youth teams trained at Battersea Park on weekdays.

Despite his length of tenure, the 53-year-old remains as restless and relentless as ever, which is why the club unveiled a ‘Vision 2030’ for their Academy last year. Planning started in 2019, when Frank Lampard was manager, and it came to fruition last year.

“We met as a management team and reviewed how things were going in the Academy,” Bath remembered. “We said, ‘We are in a good place in terms of young players getting an opportunity, but we need to go again.’”

The day before our trip to Cobham (November 17th), Chelsea's Academy staff and players had some even more illustrious visitors: the New Zealand All Blacks. The team took on England at Twickenham on Saturday and broke off from their training schedule to share ideas with Bath and his staff.

A signed All Blacks shirt lay across a table in Bath’s office, which is situated in the middle of the Academy building and invariably has an open door. He explained that other teams and individuals - from football, other sports and beyond - are regularly invited in to talk about best practice.

In the morning, we went inside the dome (called 'The Arena') to watch Chelsea's Under-13s doing individual work with coaches. In total there are 24 full-time coaches at the Academy and about 200 players, but for this session the coach-to-player ratio was almost 1:1. 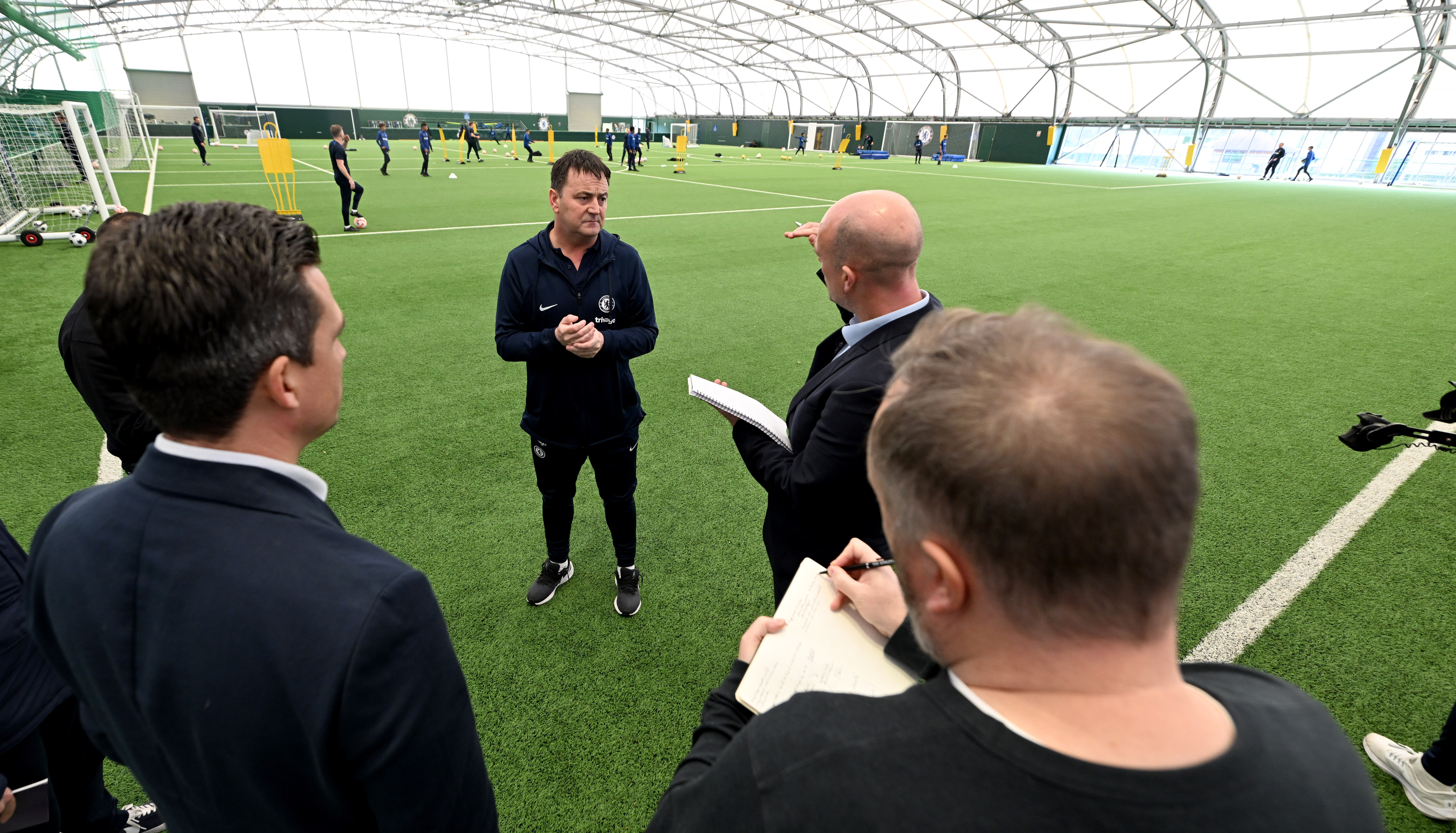 Neil Bath listens to a question from TGG's Simon Austin

Afterwards, a group of players came in to reflect on how they had compared to a list of 'High Performance Behaviours' written on the wall behind. There were five 'characterisations': the spectator, the moaner, the high performer, the bully and the survivor, with different traits listed for each. Part of the discussion was about exactly what 'bravery' means in a football context.

At lunch the boys - the 13s, 14s and 15s, up to the 21s - mixed in with each other and with the staff, who included former Chelsea player and now U21s assistant Jon Harley. Carl Hutchings, the former Brentford player and now a property entrepreneur and mentor, sat eating and chatting with one of the older boys at a small table.

There are plans to further develop the Academy site and Bath insists that new owners Todd Boehly and Behdad Eghbali remain as committed to youth as predecessor Roman Abramovich.

After years of failing to get first-team opportunities, Chelsea’s youngsters really started to come through under Lampard, when there was a transfer ban. However, last summer the Blues spent £278.4m on signings, potentially blocking pathways for homegrown players.

When asked whether he thought the new owners would continue to back the Academy, Bath said: “Yes 100%, I really do. It’s always a team effort, everybody’s in it. Frank put them in and gave them the opportunity. Subsequently Thomas (Tuchel) has kept going, Graham (Potter) has kept going.

“They (the new owners) have gone on that fact that we will continue that opportunity and I am very confident they are excited about supporting and taking this vision forward. It will get their full support.”

A DECADE OF EPPP

We were at Cobham to mark 10 years of EPPP: the plan that was launched by the Premier League, Football League and Football Association in 2012 with the objective of producing more and better homegrown players in England.

More than 90 clubs now hold Category One to Four Academy licences and there have been many successes:

Whereas there was one single overarching target for EPPP in 2012 - to produce more and better English players - there are now three, with 'providing life-enriching experiences' and enhancing the 'health of the game' added to the mix.

"Academies play a central role in assuring the long-term health of our game - for the benefit of all its stakeholders and participants," said Neil Saunders, the Premier League's Director of Football, who accompanied us on the visit to Cobham.

Challenges remain, however, as Saunders himself acknowledged. A constant complaint has been about the levels of compensation received when players move to other Academies.

In 2018, former Ipswich owner Marcus Evans said: “At the moment, the tribunal valuations for the loss of a talented player to the top Premier League clubs bears no relation to the potential of the player.”

Saunders said there had been an increase of compensation costs "by about 70% across the board, so clubs do receive more if a player moves at different age groups, and we also increased the contingent sums, when a player goes on to make an appearance in the Premier League.”

These changes weren't publicly announced, although the new compensation rates can be seen in the Premier League's Youth Development Rules for 2022.

Academies have also been criticised for their levels of after care - or lack of - for released players. This really came to the fore following the suicide of Jeremy Wisten in October 2020, less than two years after he had been released by Manchester City.

Saunders pointed to the recent commitment for there to be a full-time Player Care officer at every Category One to Three Academy - with £2m provided by the Premier League to help this happen. Furthermore, clubs have been asked to give a three-year “commitment of support” to released Academy players.

“So we were taking them on a journey from above average to mediocrity and that was a problem.” 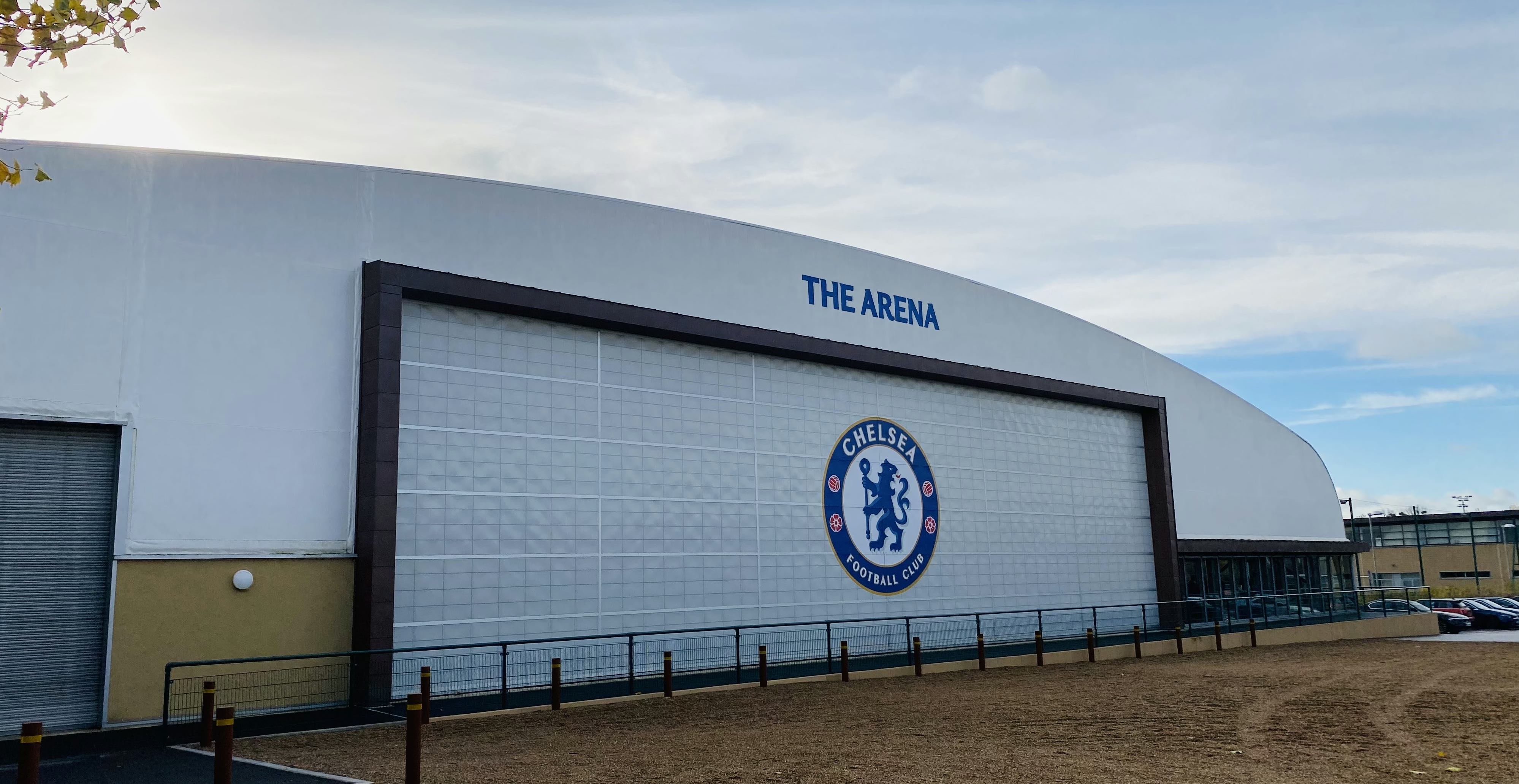 Saunders insisted there had been progress in this area as well.

“Something we are really proud of is that our boys’ GCSE results are above the national average and that’s a huge shift from where we were 10 years ago," he said.“We’ve seen big improvements there - and at the older age groups, where traditionally it was a BTEC model that all players would follow.

“All of that has led to a significant increase in our boys taking A Levels, more going on to higher education. We have Progress Eight - a rule that every boy has to take at least eight GCSEs and we are working with clubs to track that progress.”

TGG understands that less than a fifth of scholars take A Levels.

Brexit poses another big challenge, in terms of player recruitment in particular.

"Brexit impacts clubs’ ability to recruit players 16 to 18," Saunders explained. "That's a FIFA regulation, that you can’t recruit before 18, so the challenge is how do we adapt and create the opportunities for players to play with and against elite European opposition."

Bath added: "I generally believe a best-with-best model is good for the development of young English players and I use the example of Andreas Christensen (who is Danish) and Nathan Ake (who is Dutch) as two players who have been part of the development of English talent.

"I would be in support of challenging the criteria to enable us to get greater access to talent… from abroad… to go back to the best with best."

As the Premier League are looking to improve and develop the Academy system, so too are Chelsea. Their Vision 2030 has five main targets:


Bath remains passionate about both player and coach development. The roll call of coaches who have come through the Cobham Academy is arguably as impressive as that of players, with Michael Beale, Joe Edwards, Paul Clement, Steve Holland and Brendan Rodgers among the 'graduates' to have gone on to big senior jobs.

Edwards’ potential was identified early in his coaching career and he was given a one-year sabbatical in the club’s loans department to gain different experience, as well as making visits to Borussia Monchengladbach and Real Betis and working with England U18s.

Now he’s assistant to Lampard at Everton, having also worked alongside him with Chelsea’s first team.

Developing coaches involves putting a ‘cell’ around them, Bath explained, with different subject matter experts on hand to provide support. Joe Cole, who has been coaching with the Academy recently, wanted to develop his presentation skills for example.

He was filmed and given analysis and feedback on his performance in this important area.

Similarly, every player, all the way down to the Foundation Phase, has a ‘case study’ every six weeks in order to see how they're progressing against their Individual Action Plan (IAP).

Bath said the Academy is trying to develop "the future player" and that data and analysis was a particular area of focus and investment.

He said: “How are we going to develop players in our coaching content and in our games programme to be able to move with the trends of the game, which are scrutinised through video and data more and more?"

Even the youngest players are now comfortable with media and analysis and expect to have a say in their development.

“The conversations you have with a 12-year-old now are unbelievable,” Bath said.

There remains a big focus on the person as well as the player, however. So there is an emphasis on education, with youngsters attending the Parkside school, which is down a lane from the training ground, and there are also seven full-time teachers at the Academy.

"Of our full-time players in the school that did eight GCSEs, something like 98% passed above average," Bath revealed. "They are really quite impressive results."

Bath has come a long way from those days at Battersea Park almost 30 years ago, but his enthusiasm appears undimmed. He, Chelsea's Academy and EPPP as a whole now move into a new era - and appear to be relishing it.