Zlatan Ibrahimovic and the benefits of a multi-sport approach 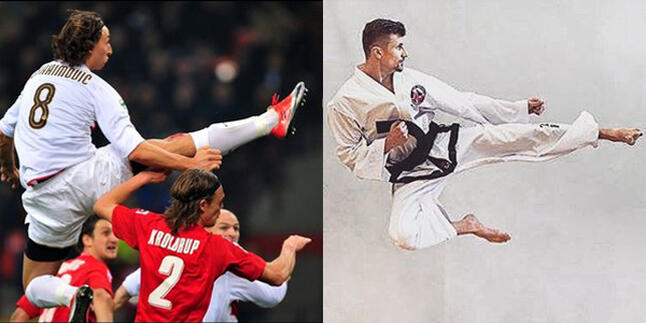 HOW fitting it was that the 500th goal of Zlatan Ibrahimovic's pro career should be a 'taekwondo goal'.

The Swede was awarded a black belt at the age of 17 and has incorporated the martial art into his game ever since. Playing for LA Galaxy against Toronto FC on Saturday night, he watched the ball come over his shoulder and spun before executing an athletic back-heel chop to send the ball into the net.

For a man of 6 ft 5, the striker has remarkable agility, flexibility and timing. He's able to pluck balls out of the air that others can't reach and score goals we haven't see before.

Saturday's goal was only the latest in a long line of 'taekwondo goals'. You can look back to his backheel volley against Bastia in October 2013; the kung fu volley against Monaco a month earlier; and the 30-yard overhead kick against England in November 2012.

None of these goals would have been possible without his martial arts background. Tony Strudwick, Manchester United’s former Head of Performance who now holds the same position with Wales, has seen the striker at close quarters.

He told TGG: “Zlatan is very strong on mixed martial arts – you certainly wouldn’t want to take him on.”

Strudwick introduced taekwondo into training at Manchester United's Academy just as Ibrahimovic arrived at the club from PSG in the summer of 2017. It was part of a mixed sports policy and Andrew Deer, a former European Championship bronze medallist in taekwondo, came in to teach kicks, jumps and spins.

“It was great for footwork, balance and agility,” Strudwick added. “For us, it's all about increasing the bandwidth of movement of our players and there was a really nice transfer of skills between the sports.

“For example, in taekwondo, the athletes are very adept at closing down space and backing off, which is a useful skill in football too, for defenders in particular.”

Deer, 30, is now GB Taekwondo's lead Paralympic coach. Along with United's Academy coaches, he designed a year-long programme for the Under-9s through to the Under-21s and came into Carrington once a week to teach it.

“United wanted a focus on agility work and plyometrics, so we worked within that spectrum," he told C4 Paralympics.

"We wanted to try and make the players more robust and give them more longevity in their careers. They learnt everything about taekwondo, although they weren’t actually making contact with one another. They loved doing taekwondo, kicking each other high, and I could see a lot of talented youngsters. There were some really tall, strong guys who could switch over if they wanted to.”

Strudwick says this is part of a ‘multi-skills approach’ the club has been taking.

“If you're not careful, all the young athletes do is play football,” he said. “You’ve got to improve that multi-sport participation, so we’ve also done things like gymnastics, boxing and sprinting in the Academy.

“If players are faced with movement problems, they come up with movement solutions. There’s compelling research to show that kids who specialise in one sport very early on are much more susceptible to injuries. It can lead to overuse and imbalances.

"And apart from anything else, we want to create a fun and stimulating environment for the players, instead of a structured, sterile one. This is helping them to learn, adapt and be creative.”