UNTIL relatively recently, in English football at least, full-backs were seen as the least important members of a team.

They were defenders first and foremost, with their attacking output limited to supporting the winger from behind before delivering crosses into the box.

As Jamie Carragher once remarked in a dig at his fellow Monday Night Football pundit: “Full-backs are either failed centre-backs or failed wingers. Nobody grows up wanting to be a Gary Neville.”

How things have changed. Full-backs are now attacking wing-back style players who need athleticism to get up and down the pitch, as well as the ability to run with the ball and cross with quality.

This has been in line with a tendency for wide players to come inside, meaning full-backs are required to provide width. As wingers tend to possess these attacking attributes - and are used to playing in these wide positions - coaches have been converting them into full-backs.

However, the role of the full-back has evolved even further in recent seasons, with Liverpool and Manchester City leading the way. That's what this article - and a chapter of my book Record Breakers - is about.

Pep Guardiola has flipped the role of the attacking full-back on its head. During City’s record Premier League points-winning seasons of 2017/18 and 2018/19, the Spaniard used his wingers to provide full width on both sides of the pitch.

This meant his two number 8s needed to move forward to the half spaces, to provide passing options between the lines, while also connecting with the centre-forward and wingers.

For City’s full-backs, the high and wide positions of the wingers meant there was no need for them to move forward to provide width. However, with the number 8s being positioned high up the pitch, there was a need for them to assist the centre-backs and midfield pivot in building the attack. This, in turn, created numerical superiority for City around the ball. 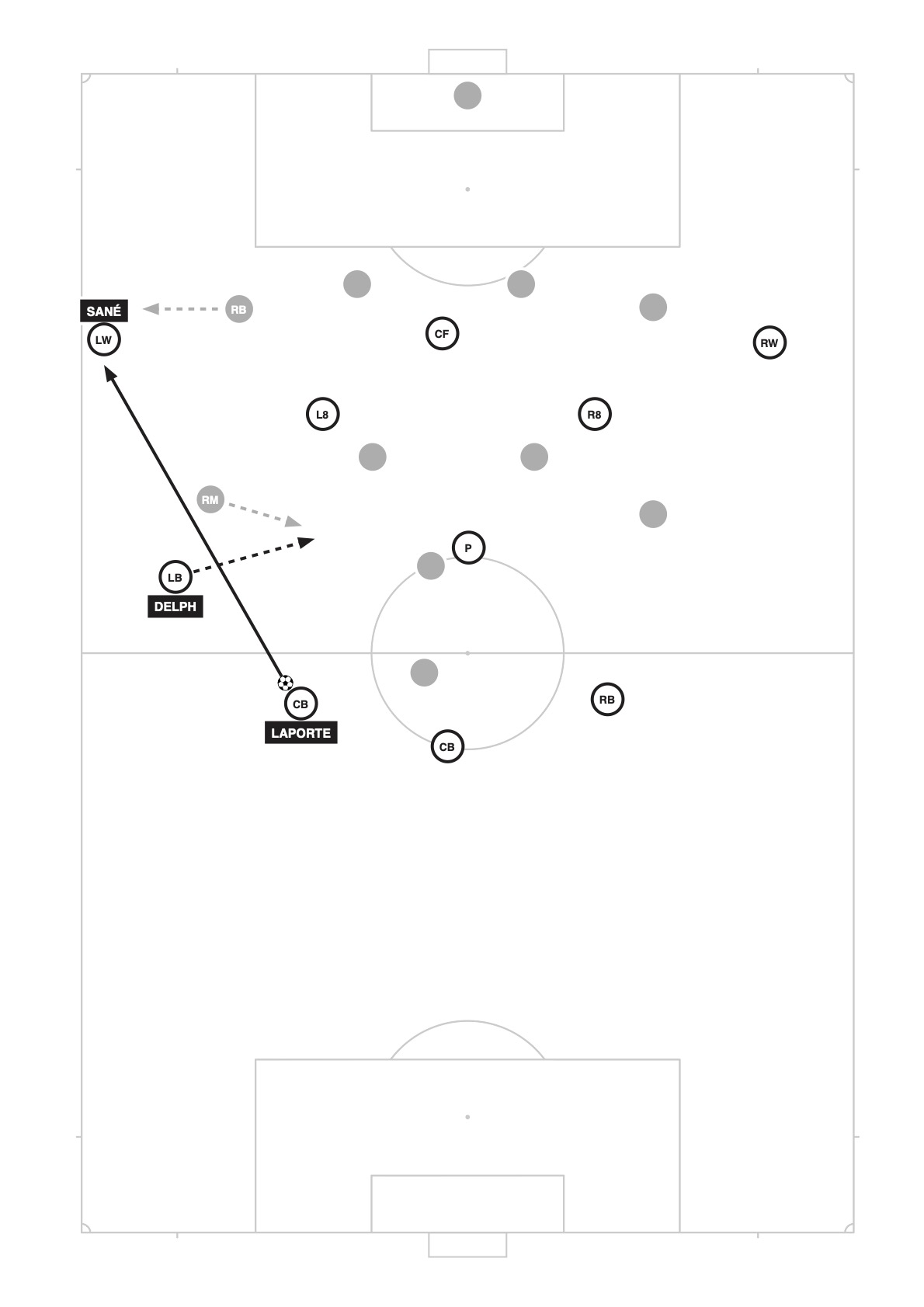 How the narrow positions of City’s LB opens up a 1 v 1 for their LW. Delph makes a run inside, taking the opposition wide player with him. This creates a passing line from Laporte to Sané, who finds himself 1 v 1 against the RB.

During this period, City’s full-backs were usually Kyle Walker on one side and Oleksandr Zinchenko or Fabian Delph on the other. City would either form a 3-2 or 2-3 shape in build-up and progress the ball into their five attacking players who were positioned higher up the pitch.

Aymeric Laporte, Vincent Kompany and Walker would tend to form the three, with Fernandinho and Delph as the two. Walker could be considered as a third centre-back and Delph as the second central midfielder.

The in-possession function of this structure was two-fold, depending on the decision made by the opposition wide players:

Another benefit of the full-backs performing deeper roles in possession was seen when City lost the ball. Many counter-attacks involve a team’s wide players attacking the space behind and inside the opposition full-backs.

Indeed, most teams playing City looked to use the counter-attack as their main form of attack. However, the more conservative positions of City’s full-backs made this extremely difficult.

During the 2017/18 and 2018/19 seasons, it was very rare to see City’s full-backs caught the wrong side of the opposition wide player. Once the ball had been successfully progressed, they would move into positions tight behind their opposite number, before aggressively closing them down as soon as the ball came in their direction.

Liverpool’s Andy Robertson and Trent Alexander-Arnold fit the modern trend of attacking full-backs. However, during Jürgen Klopp’s time at Liverpool we have seen their roles - and particularly that of Alexander-Arnold - evolve.


They have often dropped deeper to help construct attacks and Alexander-Arnold, Liverpool’s right-back, does this to such an extent that he could be considered a playmaker.

The England player once commented that he and Robertson “want to change the way the position has previously been thought about” and there has been talk about him moving to the central midfield position he played during his Academy days. In fact he played there during England’s 4-0 win over Andorra last month.

However, it is arguably more advantageous to use Alexander-Arnold’s passing ability from right-back, because of the time on the ball he gets there. The perception persists that when receiving passes in fairly deep areas, full-backs do not need to be prioritised by the opposition. This means they tend to get more time on the ball. 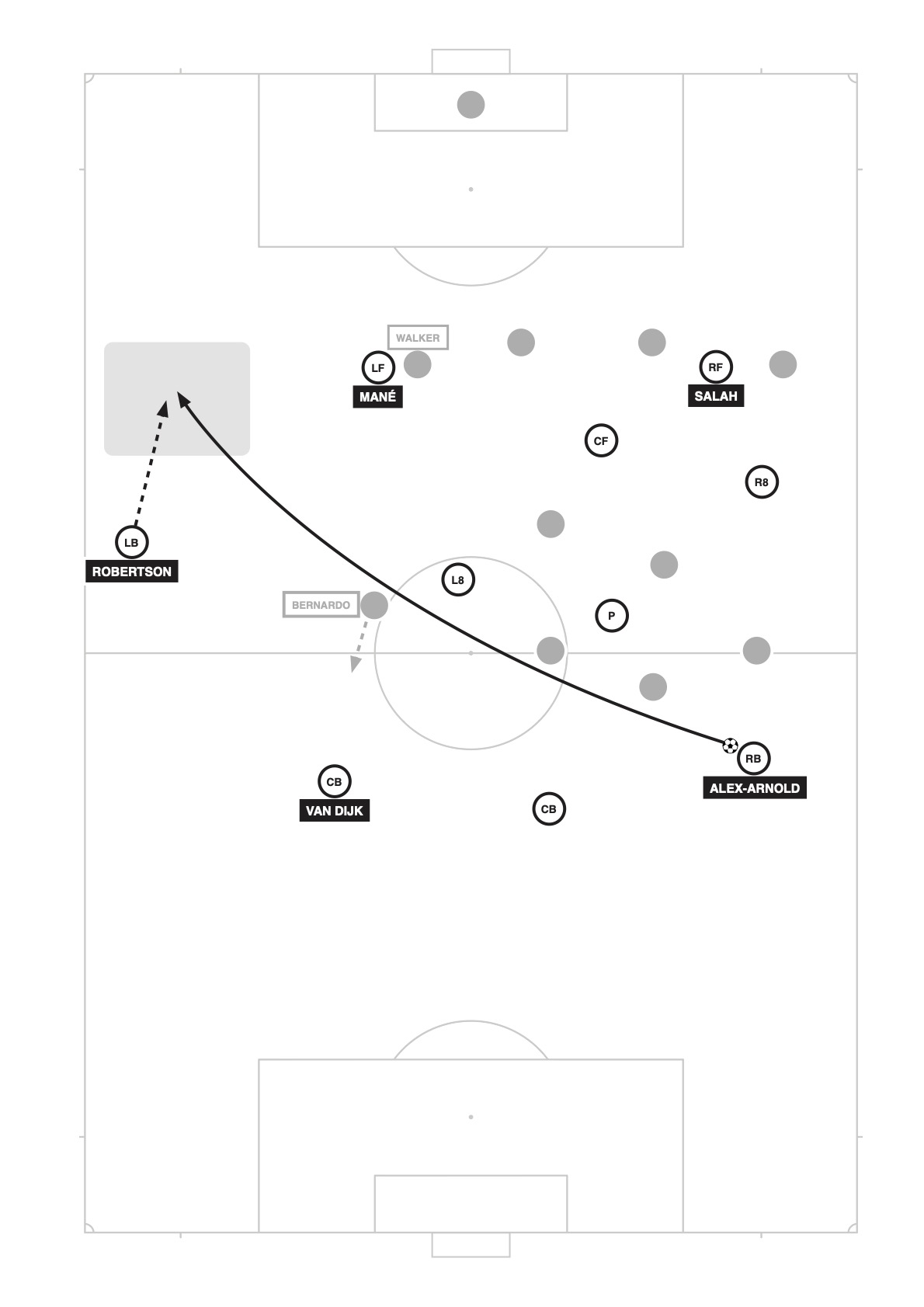 Salah’s goal v Man City, Nov 2019. Following a switch of play between Alexander-Arnold & Robertson, Bernardo takes a couple of steps forward anticipating a pass to Van Dijk. This enables Robertson to be found untracked with a switch of play. Walker is occupied inside, meaning he can't get out & prevent Robertson’s cross.

A similar evolution has happened with centre-backs: because the opposition have tended to allow them plenty of time on the ball in locations deemed less dangerous, they have developed into ball players.

The instruction to many wide players when out of possession has been “stay narrow to protect the pass between the lines and allow the ball to go their full-back.”

If full-backs are likely to be given more time on the ball than other players, then why not develop them into playmakers?

During Liverpool’s record Premier League points winning seasons of 2018/19 and 2019/20, Alexander-Arnold would frequently use a unique switch of play pass to left-back Robertson.

Now, a switch of play to a full-back is widely used in football. What made this particular pass interesting was the that it was direct from one full-back to another, which we weren’t used to seeing.

Against more or less any other team in the Premier League, the left-back on the far side is irrelevant, because he can’t be reached without a shorter pass from the right-back to someone inside first.

The opposition lines can then shift across, enabling their furthest players on the opposite side to be closer to the left-back should a switch of play occur.

Alexander-Arnold’s ability to strike this switch of play directly, from close to the right touchline, was something we hadn’t seen before and meant the opposition were likely to be caught too far over the other side to get to Robertson in time.

The opposition didn’t know if he was going to pass into the channel on his side, between the lines to Firmino or Henderson, or to the opposite side. This meant it was difficult, verging on impossible, for them to position themselves to cover all three options.

Talking to The Athletic, Robertson explained: “As teams press the side of the pitch where the ball is, there’s usually a free man on the other side. The quicker you can get the ball there, the less time the other team has to adapt.”

Unlike City in 2018/19 and 2019/20, Liverpool tended to ask their wide players, Mo Salah and Sadio Mané, to make runs inside, ruthlessly exploiting the gaps between opposition full-backs and centre-backs. This would usually mean that their full-backs would have to move high and provide the width.

However, Liverpool had a variation on this scenario when Alexander-Arnold received deep and Salah was inside.

This was for their number 8, often Jordan Henderson, to make runs on the outside of Salah, effectively becoming a high right-back. When the opposition wide player closed down Alexander-Arnold and the left-back was forced back and inside by Salah, a big gap was created between the two opposition players for Henderson to exploit.

This movement pattern forced the opposition to make quick decisions. Should they stay man-for-man, with Henderson’s central midfield marker tracking him all the way to the touchline? Should they stay zonal, with the left-back passing Salah on to the centre-back, and moving wide himself to close down Henderson. Or should the opposition wide player leave Alexander-Arnold, and drop back to track Henderson, as if he was the actual right-back?

Football is ultimately about creating dilemmas for the opposition and Liverpool and City have used their full-backs - traditionally football’s most unfashionable players - to do this to devastating effect.