In the run-up to the 2019 Women’s World Cup, Lead Nutritionist Chris Rosimus and his team created a detailed nutrition plan to help them try and achieve this ambition.

Energy gels became a key part of this strategy, as Rosimus explained during a fascinating presentation at Playermaker’s #SHEWINS virtual conference last week.

Chris Rosimus: It was our ambition to be the most nutritionally-prepared nation in the world.

When I started as Women’s Lead Nutritionist, in 2017, I inherited what I described at the time as a generic nutrition service that lacked performance focus. There was some good stuff going on, but I felt it needed a real performance steer.

In our analysis of the team, we found that players were habitually consuming a low carb diet, so straight away this was something we wanted to address.

The She Believes Cup in February and March 2018 was a big moment for us, because it was when we first introduced energy gels. That might seem like a really simple and basic intervention in sports nutrition, but at that time it was a little misunderstood.

READ MORE: Playermaker - From Wenger's back garden to the elite

Gels were something that were not taken routinely by the players, so the objective was to get them to understand the benefit of this 30g of carbohydrate and when best to use it.

We decided to approach the World Cup (in June and July 2019) as if it was an endurance event, with each game being a stage, and mapped out a fuel plan, similar to what you’d do for a marathon.

We wanted to make sure that each player went into a game with optimal glycogen stores, as we know from the literature that this correlates with better performance.

Initially, we tried our best to educate the players about the importance of a high carbohydrate intake on matchday -1 (ie the day before a game) and how to individualise their own fuel plans.

After that, we focused on in-game carbohydrate, and knew that 20 to 30g was required every 30 minutes between the end of the warm-up and the end of extra time (120 minutes in total) to ensure there was consistent availability during the period of performance.

The message to the players was: 'One sachet of gel will give you 30 minutes of fuel.'

The uptake of gels hadn’t been great previously and we found that one of the basic reasons was the flavour, so we worked with our supplier to improve that. The players really liked fruit salad, so we went with that and thought, ‘We’ve got a gel they like’.

Talking to the players about the strategy and the reasons behind it was also key. We talked about glycogen and how it depletes during a match and discussed would this looked like if it happened to them.

The next thing was how to deliver our strategy, because it needed to be more than just the physios carrying the gels in their bags and coming on with them.

Initially, we had to seek buy-in for the strategy form the wider multi-disciplinary team. We asked Phill Neville and the coaches: ’At a point during the training session, can we simulate a stop in the game where the players go off and take a gel?’

In training, we needed to see how much disruption this would cause, whether we could effectively apply it and whether the players would tolerate taking a gel and then going back into a high-intensity session.

In one session, we placed the carb gels around the edge of the pitch and at a certain point Phil Neville and his assistant, Bev Priestman, blew the whistle and shouted ‘gels!’ Then all of the players split off and went to take the fuel.

By doing this we were able to prove to the players and staff that during a deliberate break in the game they would be able to run off and get access to the gels.

After seeing this, I was really confident this could be applied in a game and the next stage was to execute and trial this strategy in our three upcoming friendlies.

The first area to get right was the first fuel station, straight after the warm-up. In our first friendly, against Canada, four England staff members were strategically placed at the warm-up ends and gave the players a gel in their hand as they walked off.

This showed us that the players were getting familiar with the process and had bought into it, which was so important.

Then, in the actual game, the question was whether or not we could deliver the strategy in a high-pressure environment. We’d identified that half time was a key point to take on the gel, which was obviously easy to administer.

However, we also identified that the 60 to 70 minute mark was key, which was less straightforward to administer.

Gels were dotted around the pitch and the message to the players was: ‘If there is a natural break in the game, split off and find one.’

After about 65 minutes, their goalkeeper got the ball and felt a niggle, which was the cue for our players starting to splitting off and finding the nearest gel. What I liked about this was that the manager was also involved, telling the players to go and get what they needed.

I was there watching and thinking, ‘Wow, they’re doing this for real.’ We trialled it again successfully in our next two friendlies and proved it wasn’t a fluke and was doable.

The strategy was effective at a practice level. Now, could we deliver it in a tournament?

This was a real challenge because, at this point, I didn’t travel with the team, so I had to rely on the process being delivered by others during the tournament.

Because I wasn’t there, I always made sure I was present on in group instant message chats. I’d put together images and deliver them the day before a game to the players’ chat groups.

It was all about keeping the nutrition message consistent and simple. Ultimately, what we were trying to achieve was to be the best-fuelled team in the world.

The first game was against Scotland and, again, we had gels all around the pitch. They were blacked out, because we didn’t want to contravene any marketing rights.

On 65 minutes, the ball went out of play and several of our players ran off to get them. I spent my evening at home pausing Sky and saying, ‘There’s gel arounds the pitch, it’s great!’ My wife occasionally replied, ‘Chris, get a life!’ 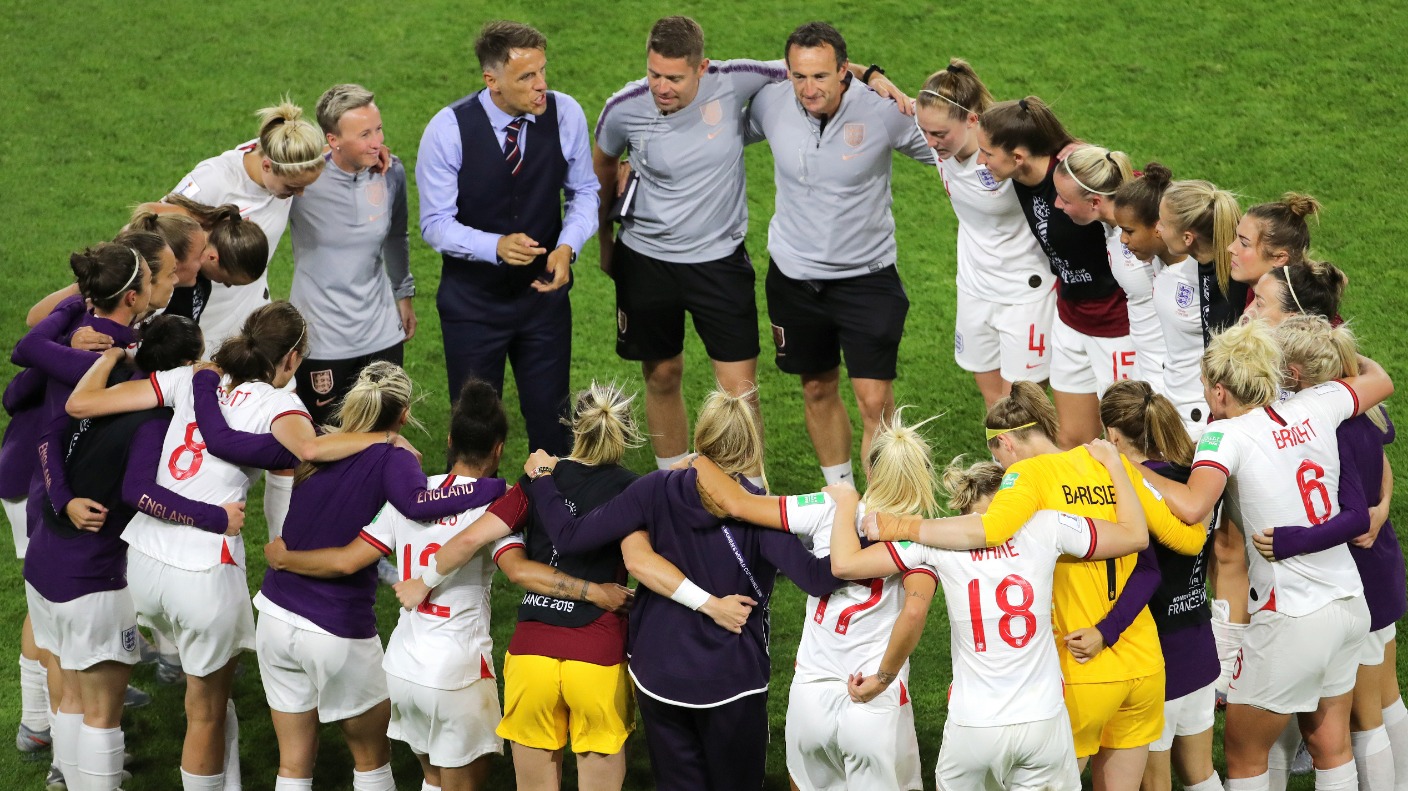 READ MORE: Lionesses - The team behind the team

In the 81st minute of the game, with the score at 2-1 to us, the players didn’t need to ask anyone for a gel, because they knew where they were. We were coming under the cosh and it was comforting to know that the players were being adequately fuelled.

Against Cameroon, we hit a roadblock. Ben Young, who at the time he was our Lead Physical Performance Coach, and his assistant, Dan Nisbet, were stopped by the officials from putting our gels around the pitch. They’d been great at delivering our gel strategy throughout the tournament.

I don’t know why this happened, but it meant we had to get really creative with what we did. During this time VAR became a great ally for our fuelling strategy.

When there was a VAR break on 76 minutes in the Cameroon game, we didn’t need gels around the pitch because the players were so tuned in that they ran off to take them.

The subs had the sachets ready and the players ran off to get them. It wasn’t the original plan, granted, but we were continuing to execute. This showed that even the best-laid plans can sometimes go wrong and still, to this day, I don’t really know what the issue was.

Business end of the tournament

Before the quarter-final against Norway, we looked at the rules and at what we could and couldn’t do. We looked at solutions such as having bags behind the goal, strapping fuel sachets to water bottles and again using VAR.

If we couldn’t get the gels out, how could we still get them to our players? But we managed to implement the strategy as per the plan.

At half time, I could see from home that our players were walking off with gel in their hands, which was great to see.

The semi-final against the United States was the biggest game we had been involved in and the question was ‘Are we still executing?’ For this game we did manage to get the gels laid out around the pitch once again.

On 62 minutes, there was a break in play and we managed to get that fuel delivered to the players at a crunch time to help their physical output.

Unfortunately, we didn’t get the right result and lost 2-1 to the eventual champions, but it wasn’t for the want of trying from a nutritional perspective.

We were proud this had been a real team effort, with special thanks to James Morehen, my Football Association performance nutrition assistant, who was a great sounding board throughout the process.

Thanks also to everyone who involved in the execution of the plan, from team ops to physios/medics, and of course the players and coaching staff. It was a real team effort.