How Belgium apply science to help Hazard and co

RICHARD EVANS first met Roberto Martinez when he carried out the Spaniard's medical at Swansea City in January 2003.

Evans was the club physio, Martinez a defensive midfielder coming off the back of a short and unspectacular spell at First Division Walsall. Little did he know that this was to be the start of a relationship that would take them to the semi-finals of a World Cup, via Wigan and Everton.

Wherever Martinez has been as a manager, he's taken his trusted fitness coach with him too. Evans says: “I remember going to my wife after that medical and saying, ‘Bev, I’ve never met anyone else like him in football’.

“He was charismatic, had standards, was professional and ahead of his time in his ideas. That first impression was the person he turned out to be."

READ MORE: Richard Evans will be speaking at our Cohesive Coaching conference in November

Earlier this year, the Welshman, who will be one of the speakers at our Cohesive Coaching conference in November, gave us an insight into how the Belgium national team use GPS.

“Although the players are all used to using GPS, none of it was really in place when we arrived - certainly not to the level we’re using it now," Evans explains.

“Roberto is a master tactician and loves his technology too. The data we get is extremely accurate, which means we can hopefully find a sweet spot where we're neither overloading nor underloading the players.

“What we want ultimately is to get the most from the players while they are with us but to also hand them back to their clubs in very good condition.”

“We’ve been on the other side of the fence, so we understand how the clubs feel,” explains Evans, whose title is Head of Team and Individual Fitness.

“Often, at Swansea, Wigan and Everton, we didn’t have a clue what our players were doing when they were away on international duty. And talk about spikes. I remember situations when players came back having tripled their workload in the 10 days they were away, which has big implications for injury risk.

“Now we try to provide clarity for the clubs and GPS helps us do that.”

Sports scientist Turlough Hendry is part of the performance team on most Belgium training camps.

He explains: “Load is a big thing and being collaborative and transparent with data helps to manage that and build trust. So a couple of days before every camp I contact all the clubs and they will send me the two weeks’ of data from their last training session.

“I can then put that directly into my laptop and by the time the players turn up for training on a Monday, Richard can see exactly what they’ve been doing and what condition they’re in. He can make a decision on day one about who does what, making it very customised.”

Evans adds: “With that information, we can periodise our eight to 10 days of camp in a way that maintains those who are playing regularly or gives a top-up to those who haven’t been playing, in high-speed running for example.

"We work with the clubs to bespoke the sessions to enhance or maintain what they’re doing.

"An international squad is made up of between 25 and 28 players and of those you can guarantee that 10 will have been playing at the highest level, Saturday-Wednesday, while others will have been on the bench or not playing at all.

“Roberto will want detailed information on every single player, so I'll tell him, ‘he needs to be protected here, make sure he doesn’t do so much distance,’ and so on. We can tailor each session to the club’s needs and ultimately Roberto’s needs, because he needs to win games.”

“Everything is set up in the gym, ready for the guys to put on their GPS units when they come in for a little bit of pre-activation," Hendry explains.

“I’ll then go out and set up my live antenna and place the miniature beacons across the pitch. From the time the players run onto the pitch I’ll be running live analysis.

“Richard will conduct his warm-up, lasting 10 to 15 minutes, and he can quickly scan my iPad if he wants to check the physical outputs, to say ‘that’s exactly what I wanted to do.'.

After that, the players go off for a session with Martinez and his coaches. The Spaniard uses a version of tactical periodisation, which means work is done within a tactical framework and almost exclusively with the ball. Sessions are filmed and video analysis carried out later on.

If a player is being used in a different role than he is accustomed to, meaning his outputs will change, then, again, Evans will liaise with their club.

“With Roberto’s system with the wing backs, we have sometimes used midfielders in those role,” the Welshman explains.

“We will make the club aware of that, because a player accustomed to doing 1,000m high intensity running is suddenly doing 1300m or 1400m, so that has to be taken into account as well.”

Evans says the physical objective of the sessions will be to “gradually increase the outputs in volume and intensity” and that GPS is used to ensure players hit their own individual benchmarks.

The human element is never lost though.

“Objective data is very important, but you also have to talk to the players and understand how they're thinking and feeling. It's a collaborative process.”

“The biggest benefit of Apex is its ability to sync my drills back to the desktop once training has finished," says Hendry, who has worked as a GPS analyst at every Belgium camp since Martinez took over.

"Running live means I can have a report ready immediately after training if I want to, straight from the app, but what we normally do is download.

"So I print out a PDF report for Richard looking at various metrics. There will be the standard ones, like distance covered, but we can also split that up into high speed running, explosive distance, maximum speed and so on. 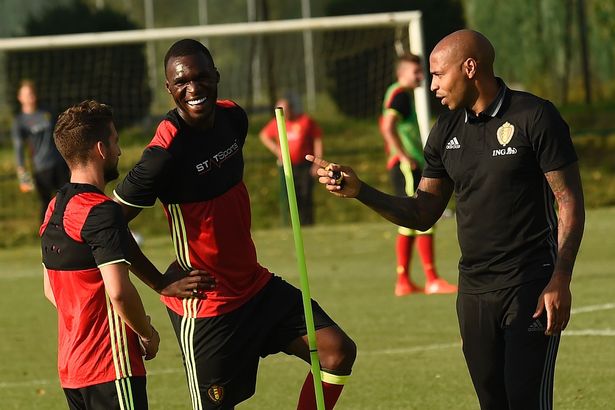 “We also conduct the top three heart rate zones, so 80 to 90% of capacity, 90 to 96% and 96% and above. I’ll do a report on the session as a whole and also on each individual drill for each individual player per minute.

“The management team will take a look at that as a group, often after dinner, and talk it over with the video analysts.”

Martinez, Henry and Jones "take an active interest" in the GPS data, "but essentially leave it to me," Evans says. "If there is a problem, they will come back.

“If a player has been below his benchmarks, we can see those sensitivities. In that case I'd probably have a chat with the individual to find out what he thinks happened. It may be he was a bit tired or that other external influences like a problem at home inhibited his performance.”

This is where Evans and Hendry return the favour that they got from the clubs ahead of the camp.

“If the camp finishes on the Sunday, the clubs will be getting the raw files by the time they get their players back on the Monday via the Exchange. They will all have their own training stress balances and so on and will want to see what their players was doing with us.

"They can pull out the numbers as if they had been doing the sessions themselves, so there is no interruption in the data.”

At the next camp, Evans plans to start using the Apex smartwatch, which will be particularly useful for rehab work.

Despite being a fan of data, the Welshman says you cannot overlook human factors such as friendship and team spirit.

“They players are a talented bunch - some of the best players in the world,” he says, “ but they also get on very well, having played together at youth levels, developing relationships that go back many years.

“You can see the level of friendships that are there, which are great. They’ve been open, welcoming and very professional since we came in, allowing us to implement a few of our things, like the GPS.”