JAMIE CARRAGHER might now say “I absolutely loved him, I adored him”, but his relationship with Gerard Houllier was more fractious at the start.

The Frenchman, labelled ‘Gerard Who?’ when he arrived at Liverpool in the summer of 1998, was eager to rid his squad of their Spice Boys reputation; Carragher, who had just broken into the first team, enjoyed social drinking with friends and family.

When the player was sent off against Charlton in February 1998, it meant 40 days without a game and Houllier decided he needed to devise a plan.

“He thought I was drinking in the afternoon and had me training twice a day - in the morning with the lads and on my own as well,” Carragher remembered.

“One Monday morning when I came in he said ‘what did you do at the weekend?’

‘I went out with me dad for a few drinks.’

‘What?! You go drinking with your own dad?’

Houllier was no dictator though.

“In modern management, you need to be able to convince, not impose,” he told the TGG Podcast. “You do that by using examples and by proving it pays off.

“Soon enough, Carra understood that the body of a professional player is like a Formula One car. If you put the wrong sort of petrol in, you’re not going to win the race.

“And I was able to demonstrate to him what had happened to those players who had done a lot of drinking during their early years as a professional - they picked up a lot of injuries when they were 27, 28.

“When you are young, you can play and have a party, have a drinking session, but when you are a bit older you can’t repeat that sort of life. I explained that you have to live for this job for 10 years, to devote your time, energy, recuperation, sleep, everything.

"If you do that, then usually you have a successful career and it lasts longer. Carra, his career probably lasted longer than he thought."

That’s something of an understatement, because Carragher played 737 games over 17 years for the club and is second on their list all-time list of appearances, behind only Ian Callaghan.

Back in 1999, when Carragher was 21, Houllier had told him his career would be over by the age of 26 if he carried on as he was going. This was something the player took great pleasure in reminding him of when he reached the landmark.

“When it was a birthday, Gérard would always make a fuss of us in front of the other players," Carragher recalled, "so when it was my 26th, I said to him, ‘still fucking here, aren’t I?!’”

Houllier, who had previously managed Paris St-Germain and France, introduced a new focus on nutrition, recovery and training intensity when he arrived at Anfield in the summer of 1998.

Change can be uncomfortable - “it’s a difficult experience, because it can destabilise and cause concern, particularly for older players" - and some big names fell by the wayside.

In the summer of 1999, Paul Ince, Jason McAteer and Steve McManaman were all sold and a number of new players, including the three Hs - Sami Hyypia, Didi Hamann and Stephane Henchoz - came in.

A group of young homegrown players became the core of the side. Michael Owen was in his nadir during the Houllier years, Carragher became a fixture and Steven Gerrard, the younger of the trio, became the talisman. 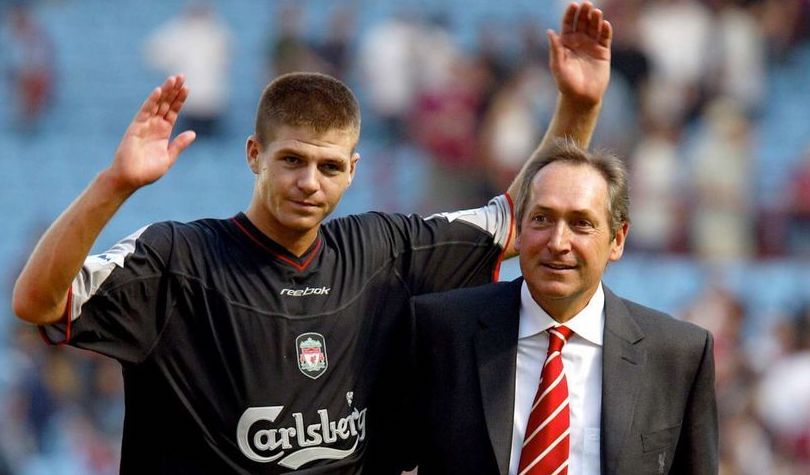 Houllier describes the midfielder as the best player he worked with “by a long distance”.

When you consider that he also managed Eric Cantona, Owen and a young Thierry Henry, this is quite some accolade.

“I discovered Stevie by accident,” Houllier admitted. “I was going to an Under-19s game to look at somebody else and this player was running box to box. I liked him and afterwards I said, ‘you come with us tomorrow to train with the first team.’

Gerrard made his debut as a last-minute substitute against Blackburn Rovers on November 29th 1998, yet didn’t become a regular in the side until the following season.

“We had to be careful,” Houllier said, “because he had groin problems, hamstring problems, back problems. He was growing into a man, so we had to be patient. We didn’t overdo it with him and that’s a source of pride.”

Gerrard was given the captain's armband at the age of 23 and Houllier says he was the complete player.

“Right foot, left foot. Could defend, could attack. Could give assists and score goals. He had mental strength and leadership qualities - Stevie had everything.

“And he was very fast, too - faster than people think. I remember a training session when we recorded 20-yard sprints and his test was as good as Michael Owen’s.

“I said ‘can you do it again’ and he thought I was questioning his ability. But he was explosive, very fast. And he was also a very nice man too, which, on top of everything else, was something brilliant.”

Despite his recent travails at Rangers, Houllier believes Gerrard will become a top manager.

“He was a natural-born leader, but also clever," the Frenchman said. "He thinks, he analyses, he’s not just a blind leader. You can follow him and I think Stevie will be a top leader.”

The apotheosis for Houllier's Liverpool was 2001, when they won five trophies in one calendar year: the League Cup, FA Cup, Uefa Cup, Community Shield and Uefa Super Cup.

On top of it all, Michael Owen was winner of the Ballon D’Or.

“Not many English players have won the Ballon D’Or,” Houllier said (Sir Stanley Matthew, Bobby Charlton and Kevin Keegan are the others). “Since him, nobody. I think at the time he didn’t realise what a huge reward it was for him.

The admiration is mutual, because Owen rates Houllier the most influential boss he ever had.

“Houllier was a winner,” he said. “He got the city, he got the fans, and he had us believing in him and trusting in him. He was the manager when I had my golden spell as a footballer.

“No question, he would be the biggest influence on my career from a manager’s point of view.”

Carragher explained that the Frenchman brought a hard edge the side had been missing before.

"We had a lot of Cup finals under Houllier and he’d say ‘if I see anyone waving to a wife or family member as you walk out, I’ll bring you off in a minute.’

"I think everyone has this perception of Houllier as a nice French uncle, but he was so tough, so hard. His team meetings were amazing. I absolutely adore that man."

Houllier said: “The best compliment I had was from David Moores, the chairman, who said I put the club into the 21st Century,”

That treble-winning season was the summit for Houllier's Liverpool, although, after suffering a heart attack at half time against Leeds in October 2001, just continuing as a manager was a major achievement.

Subsequent big-money signings - most notably El Hadji Diouf - failed to deliver, and the 2002 League Cup was the only other trophy of his reign. Yet although the Frenchman left Liverpool by mutual consent in May 2004, his legacy continued and is felt even to this day. 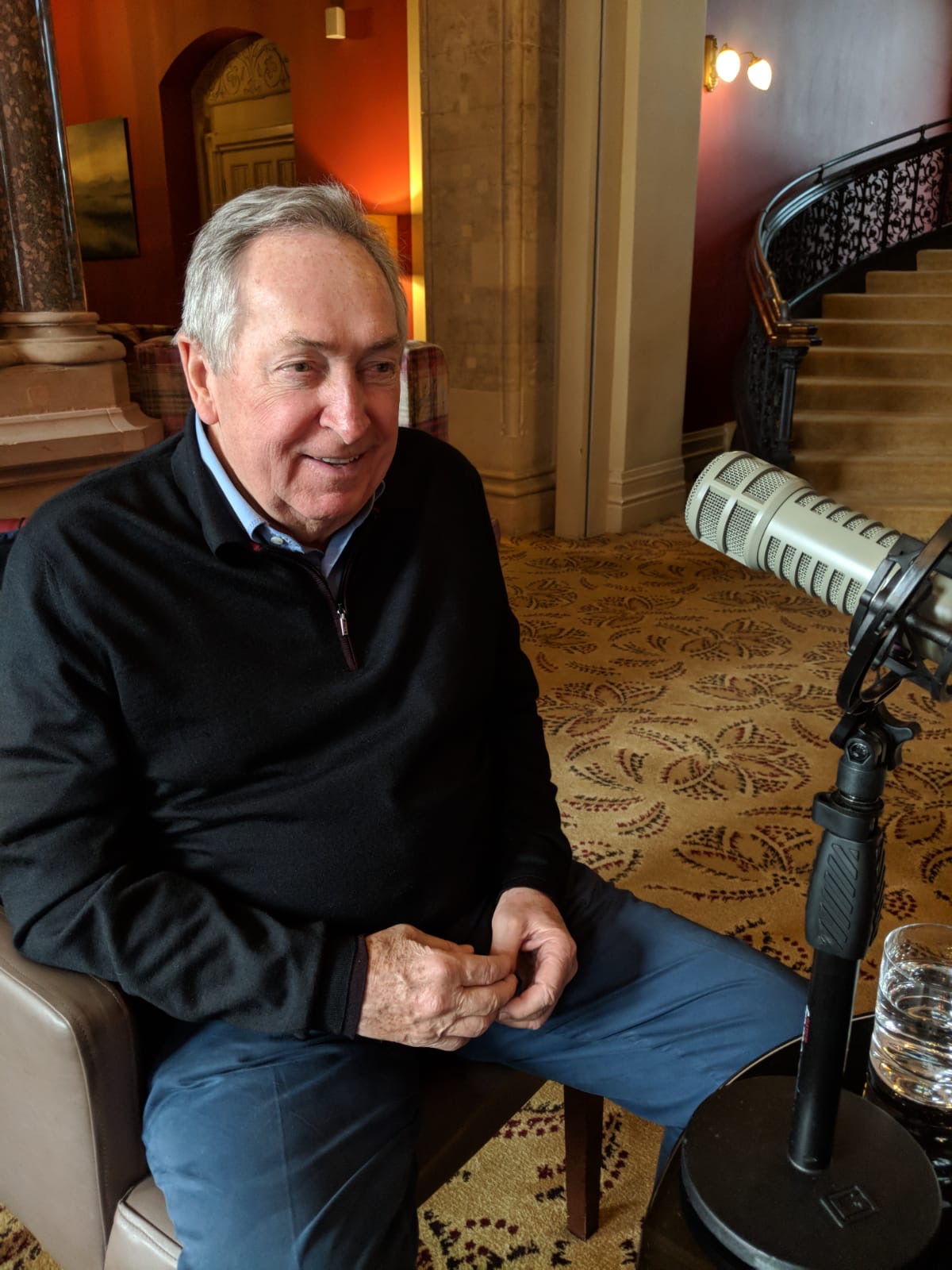 When Liverpool won the Champions League on that famous night in Istanbul in May 2004, "12 of the 14 players were either signed or developed by me," with Xabi Alonso and Luis Garcia the only newcomers.

“Don’t take anything away from Rafa or any credit, but compared to when I came to Liverpool, the team was better," Houllier said. "The proof of that is that they managed to win the Champions League."

Jurgen Klopp has reason to be grateful to his predecessor too. As Head of Football for RB Salzburg, Houllier signed Sadio Mane and Nabi Keita and then sold them to the Reds.

Mane, in particular, has been a pivotal player for the European champions.

“The first time I saw Mane live was at the London Olympics in 2012,” Houllier remembered. “He was fast, had good technique and could score and make goals. He was international quality.

"I bought him from Metz for Salzburg six months later.”

Keita was playing for Istres in the French second division in 2014 when Houllier spotted his potential. He went on to win titles with RB Salzburg and Leipzig and is about to do the same with Liverpool.

EXPERT WITH THE SOUL OF A CHILD

Houllier is a big admirer of Klopp's.

“He is ideal for Liverpool," he said. "He fits in well with the city, with the passion and enthusiasm. He is an expert who keeps the soul of a child."

And the German made two "important, key signings", according to Houllier: Virgil van Dijk and Alisson Becker.

"They made the difference. The team was good; now the team is excellent. They needed a leader in defence, but somebody who was a good defender first. And no team wins the title without a good keeper.

“A good keeper will win a side six to eight points a season.”

When, not if, Liverpool win the title, Houllier will return to the city to congratulate Klopp and his successor.

“I finished second and so did Rafa Benitez and Brendan Rodgers. When he wins it, I would like to come and congratulate Jurgen, because he achieved what we couldn’t achieve.”